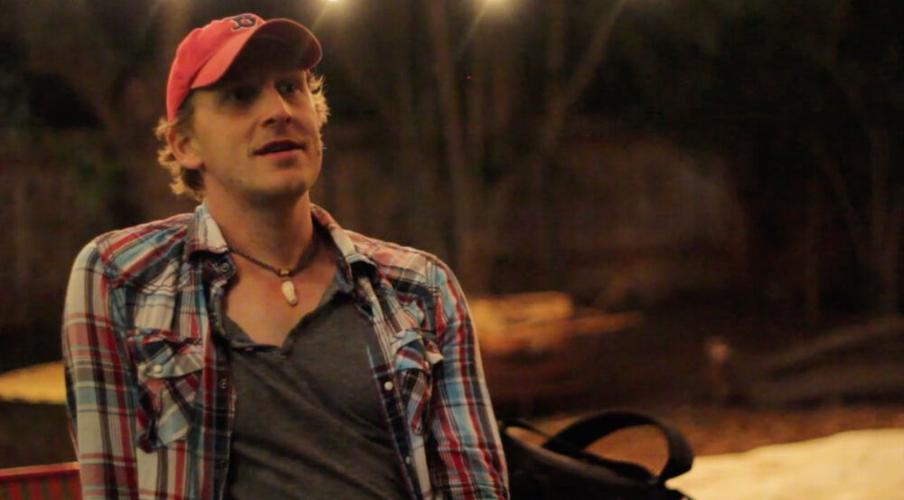 Boulder's Brian Rocheleau has created Blind Café experiences for more than 50,000 people since 2010. He will host three more at the Dairy Center this weekend. 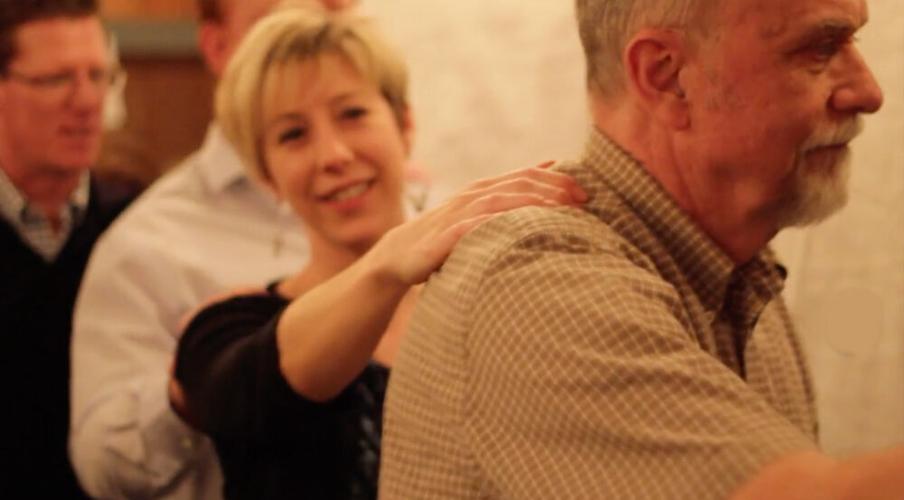 After the lights go out, attendees use the buddy system to make their way into the Blind Café experience. 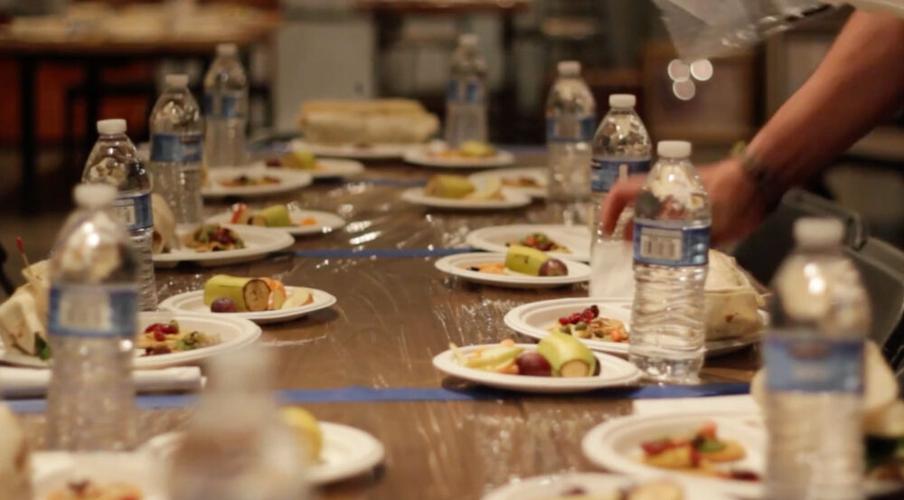 The food is laid out for Blind Café attendees before they are led to their places in a darkened room. 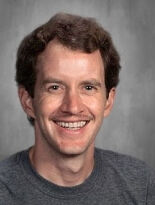 Imagine meeting a person for the first time in complete darkness. You don’t know what skin color they are. You can’t be sure of their age, gender or country of origin. Whether they have a visible disability. If they are obscenely rich or living on the street.

You don’t get any of the instant visual clues our minds start to track from the very first fraction of a second we encounter a new person. That pulse-racing jolt that comes with instant sexual attraction – or that instinctive feeling of danger or dread.

What if you only had the sound of a voice? How might that change whether you ultimately accept that person into your life – or reject them?

Brian Rocheleau, a traveling musician from Boulder who goes by the name Rosh (rhymes with Josh), learned that darkness is the great social equalizer when he wandered into something of a public people experiment in Iceland back in 2006.

Rosh had been traveling the close-knit country of 300,000 performing his songs when he wandered into a café in Reykjavik that was hosting a disability awareness event. He was handed a calling card written in Braille, led down a darkening highway and into a pitch-black room filled with the sound of people laughing and chattering away.

“It was a potent moment,” said Rosh. “It was like the shock of jumping into a pool of cold water – or being hit by a wall of sound.”

Rosh handed his card to a blind server who led him to a table with a group of cool kids, maybe in their teens or early 20s. Maybe. They drank coffee, ate pastries and talked for hours, slipping in and out of English for Rosh’s benefit. No one asked Rosh, “Where are you from?” But one did ask him straight-out: “Are you from Colorado?” The Icelandic stranger just knew.

They talked about all the things that separate us: Language, race, age, gender, disability – and the vagaries of lightness and darkness.

Rosh, who never did see his new friends’ faces in the light, later wondered what it might be like to experience music like this – “freed from all the vision,” as he puts it. That’s a curious conceit – that one way to create connection is to be separated from one’s dominant sense. But think for a moment about the awkwardness of your typical Zoom call. Our propensity to look not at the speaker but at ourselves, preoccupied with how we must look to other people. Think about the anxiety and pressure that come with a blind date, or even a casual office introduction. The gawkiness of dinner parties. All that first-impression data our minds process instantly, and form judgments from. All fueled by our one overactive sense of sight.

Rosh, who trained at Naropa University in Boulder, has come to believe that vision actually distracts us from hearing. So, what if he took all that visual clutter out of the equation and all that remains is listening to words or music?

“When I am in the dark, I experience a level of freedom from all of the inner neuroses that come with eye contact and visual conditioning at social gatherings,” said Rosh. “When everyone is on an equal and neutral visual playing field, it forces you to be in the present moment with each other – but without the stress that comes with visual processing. Like sizing everyone up in a room and trying to decide whether you fit in with these people. Darkness offers an authentic way for people to open up and share and be heard. It’s like you’re out in space – and anything is possible.”

Since 2010, Rosh and his Blind Café Orchestra have traveled the country presenting house-concert meal experiences for more than 50,000 people in 100 percent darkness. The original idea back in Iceland was to shed light on the visually impaired experience. And, yes, “I am an advocate for the blind, of course,” said Rosh. But even more than that, he said, “I am an advocate for all people to feel in connection to each other in any authentic way possible.”

“The Blind Café Experience,” returning this weekend to the Dairy Center in Boulder, is akin to a three-course sensory meal – one being an actual meal – as well as a positive social impact discussion, followed by an intimate concert. All in the dark.

Rosh has held private events for as few as 15 people and for as many as 1,000 attending a Google leadership program. (And then there was Katy Perry’s birthday party.)

Jeff Garkow, a longtime social-studies teacher at Columbine High School, attended a Blind Café experience in Boulder six years ago and ever since has brought members of the senior class to Rosh as his parting gift. That means, in essence, that seniors from the school that was the site of the worst U.S. school shooting at the time, now spend their last two hours of high school with Rosh in the safety of both the literal and metaphorical dark.

“Magic happens when you take a group of young adults who are about to head off into the next phase of life and put them into complete darkness,” Garkow said. “They open up in ways they haven't before. They have an opportunity to reflect on their time in high school and embrace an authenticity that doesn't always occur when we are guided by visual cues.”

His students, Garkow said, quickly learn how they can lean on one another and embrace that feeling of the unknown. “By the end of the night, we've got a large group of seniors singing out loud together and sharing in ways that they typically don't,” Garkow said. “It's truly an incredible experience.”

The three upcoming shows in Boulder will take place with about 50 people each in a small studio at the Dairy Arts Center. They will be guided by blind ambassadors and fed what Rosh calls a potent, intentional menu with both vegan and meat options. Rosh is partnering with Marcus McCauley, founder of the nearby McCauley Family Farm, on a meal that will be served picnic-style, “like your Grandma’s awesome Sunday dinner,” he said.

They will hear music from The Richie Flores Project and Rosh’s own Blind Café Orchestra, which includes a piano player, standup bass, cello and Rosh singing songs that evoke Sam Beam or Novo Amor. There will be a definite connection, Rosh said, between the songs and the living conversation taking place all around him, he said.

Flores is Rosh’s lead blind ambassador and greatest champion. “Rosh is clearly a unique life force on this planet,” said Flores, who caught an early Blind Café Orchestra performance in Austin, where he was then president of the local chapter of the National Federation of the Blind. Rosh was looking for buy-in from the blind community at the time, and Flores was interested in doing anything different that would provide awareness to the greater Austin community.

Flores has since broken with the federation, in part because it passed a resolution condemning all “Dinner in the Dark” experiences, which have become something of a cottage industry, he said.

“There are people in the blind community who feel that anytime you take sight away from (non-impaired) people, it just scares the (bleep) out of them,” Flores said. “They believe no positive result can come from doing that – even if only for a moment, and in a safe way. But to that community I say, ‘Why don’t you come and experience ours?’

“It is rare for us to have the opportunity to utilize the four other senses that are somewhat hidden because we don’t use them as much as our eyesight. We use darkness as a tool, and you happen to have some food in front of you. But I don’t give a (bleep) about the food. That’s not the point.”

Everyone who comes to the Blind Café has a different experience and, Rosh admits, “some people do start to lose their (bleep) in the dark.” But chaos, he said, is just another word for excitement. Rosh fully embraces the Trungpa Rinpoche mantra: “Chaos is good news.”

By embracing the dark, Rosh is going up against centuries of social training where humans have been taught that darkness is evil, and something to be afraid of. That idea is at the very root of racism and colorism, with all its light vs. dark baggage. That might be one reason the city of Boulder gave Rosh a grant in 2018 to conduct “dismantling racism” discussions in the dark.

“The dark gets a bad rap,” said Rosh, thinking back to his first experience back in Iceland. Immersed in darkness but surrounded by food and laughter, Rosh felt anything but isolated or lonely.

“I think everybody in the world right now is just trying to find their way back to the present moment somehow,” said Rosh, “and I think people feel most alive and awake when we have some context for us to be in connection.”