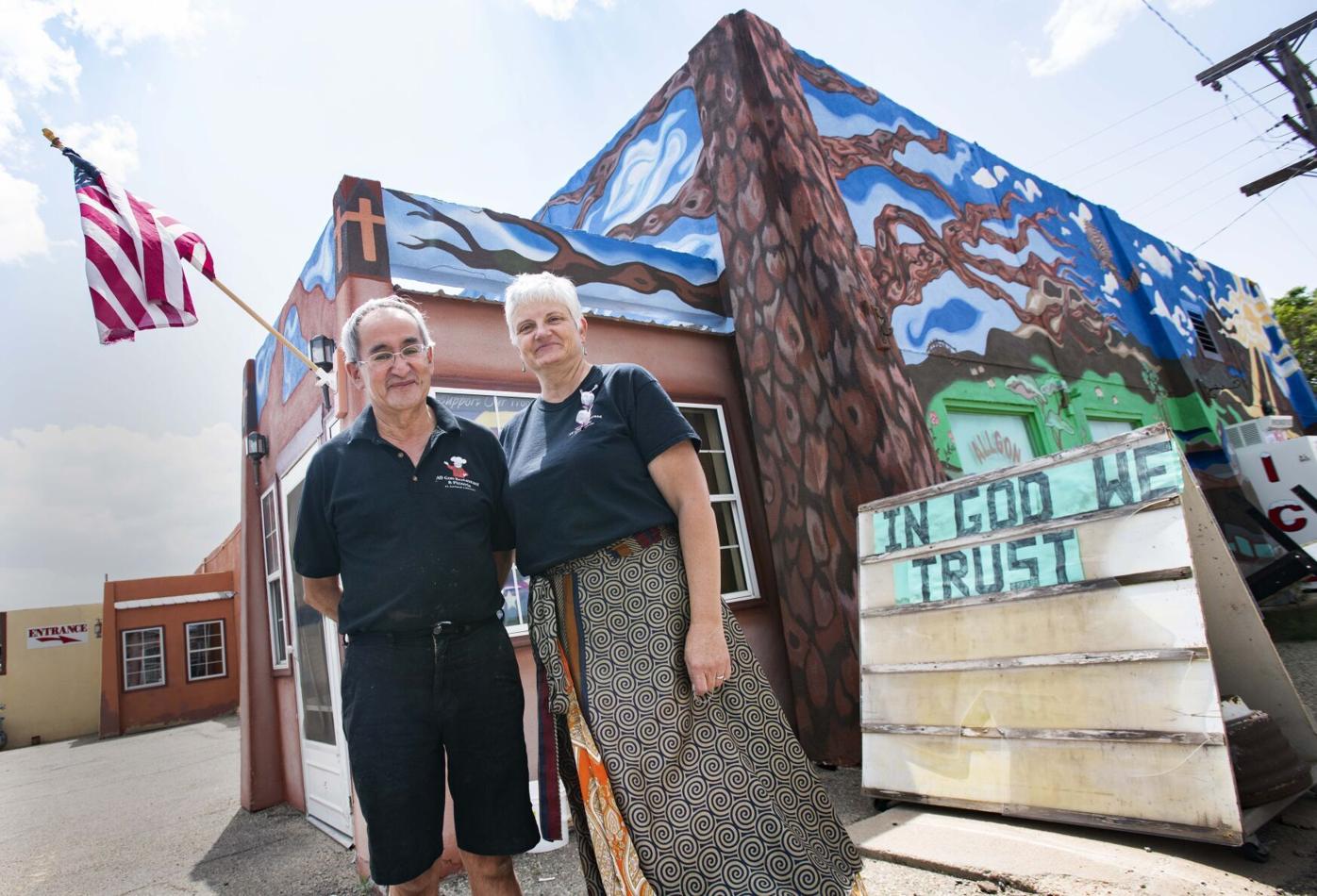 Ken and Lisa Gonzales opened All-Gon Restaurant and Pizzeria along U.S. 160 in Fort Garland in 2006. The restaurant serves a wide variety of food from pizza, burgers, Mexican and fried chicken to desserts of pie, cake and fudge. 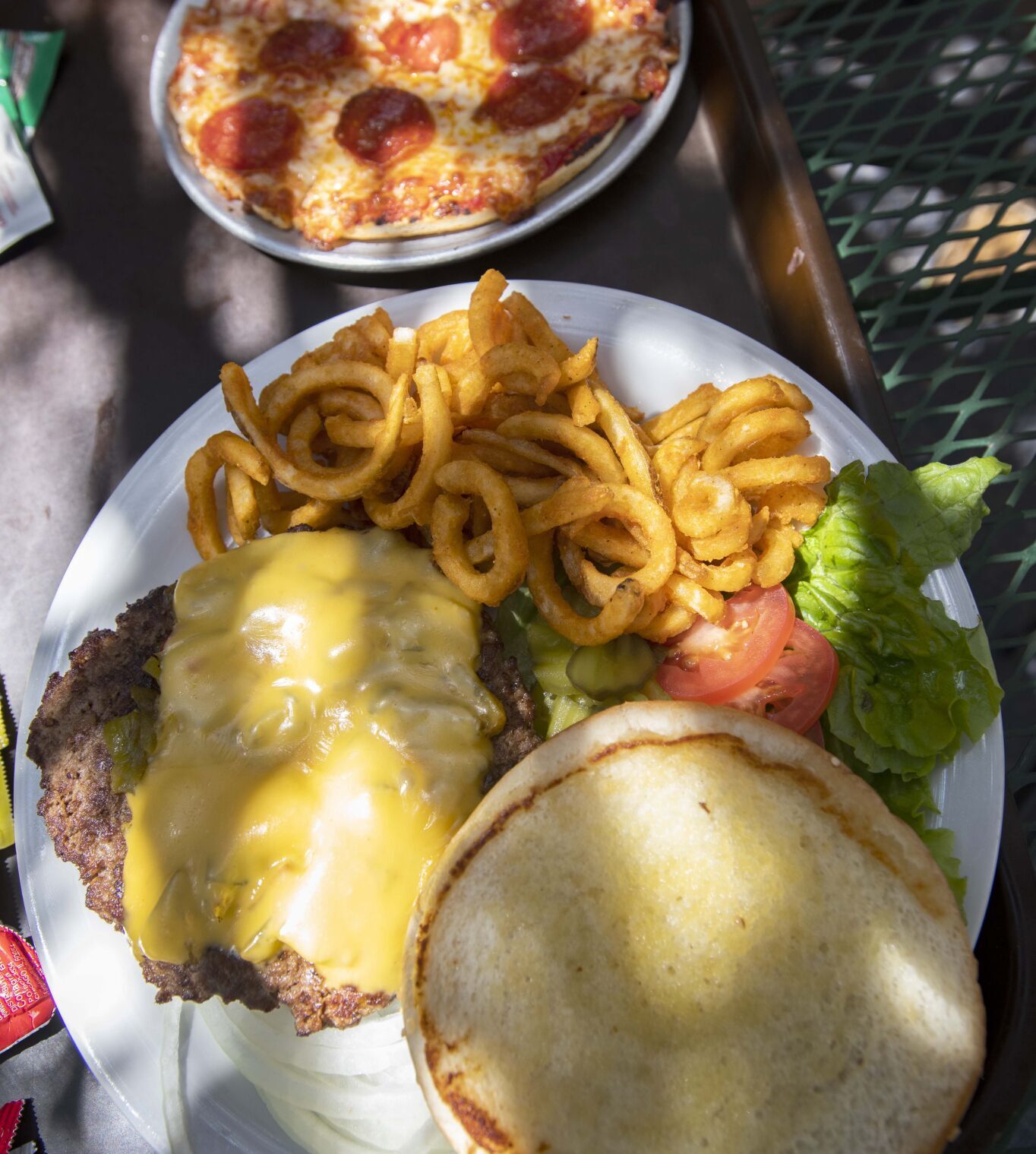 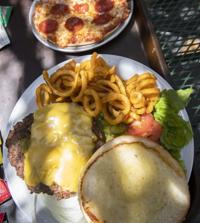 A green chile cheese burger at All-Gon Restaurant and Pizzeria in Fort Garland. 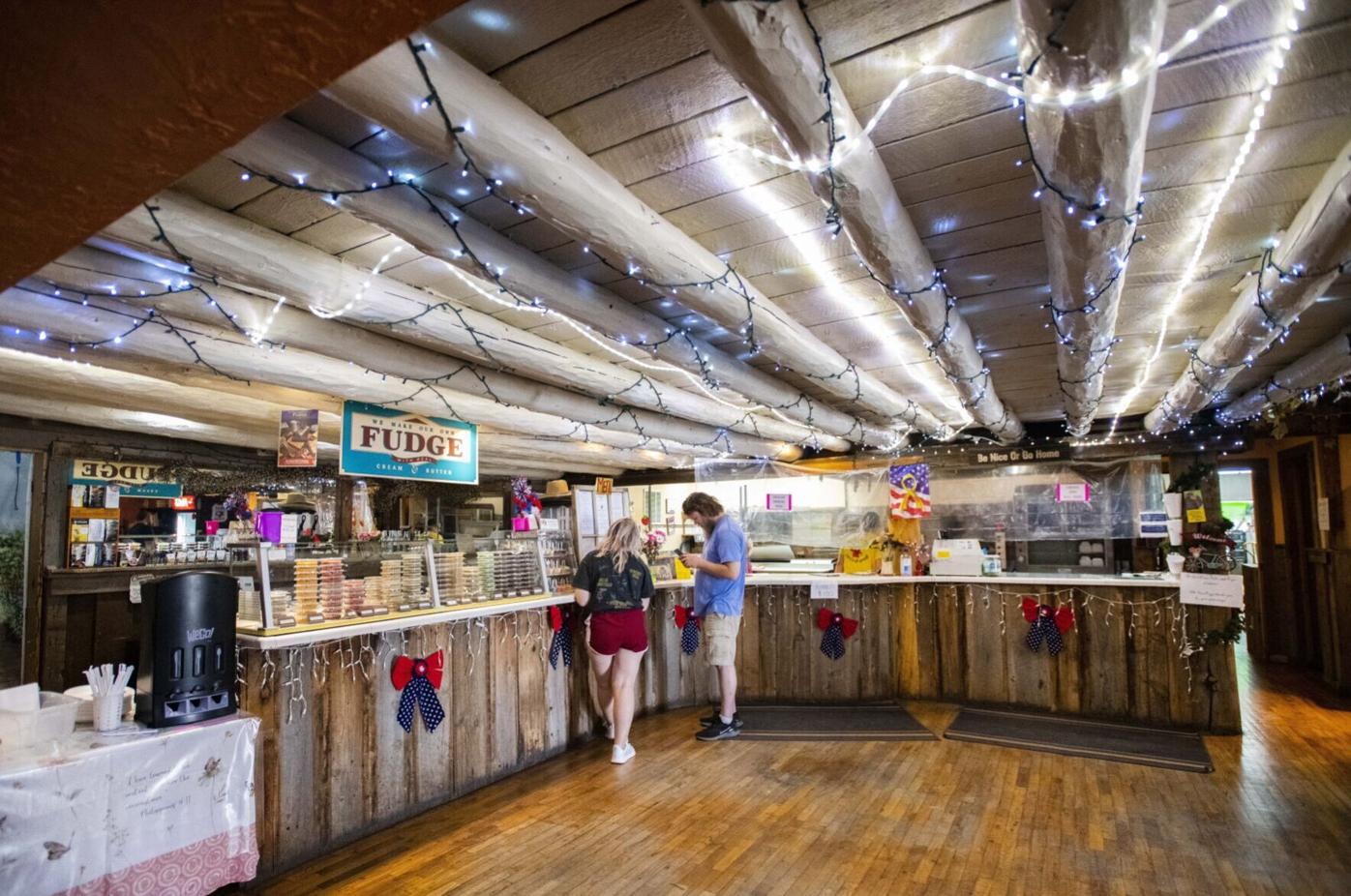 Customers look at the extensive menu before ordering at the All-Gon Restaurant and Pizzeria in Fort Garland, Colo., Aug. 11, 2021. (The Gazette, Christian Murdock) 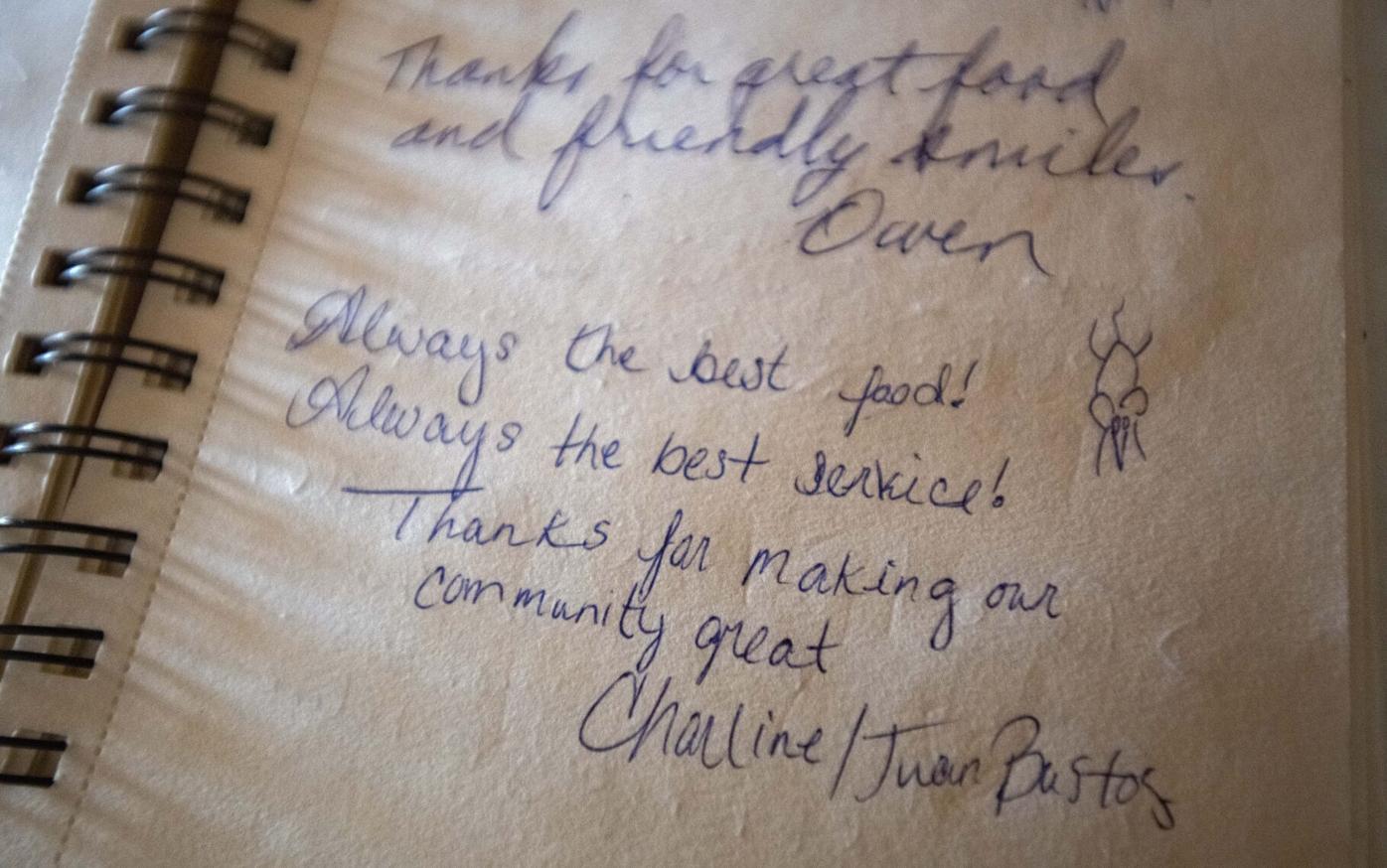 Customers write notes in the guestbook at the All-Gon Restaurant and Pizzeria in Fort Garland. 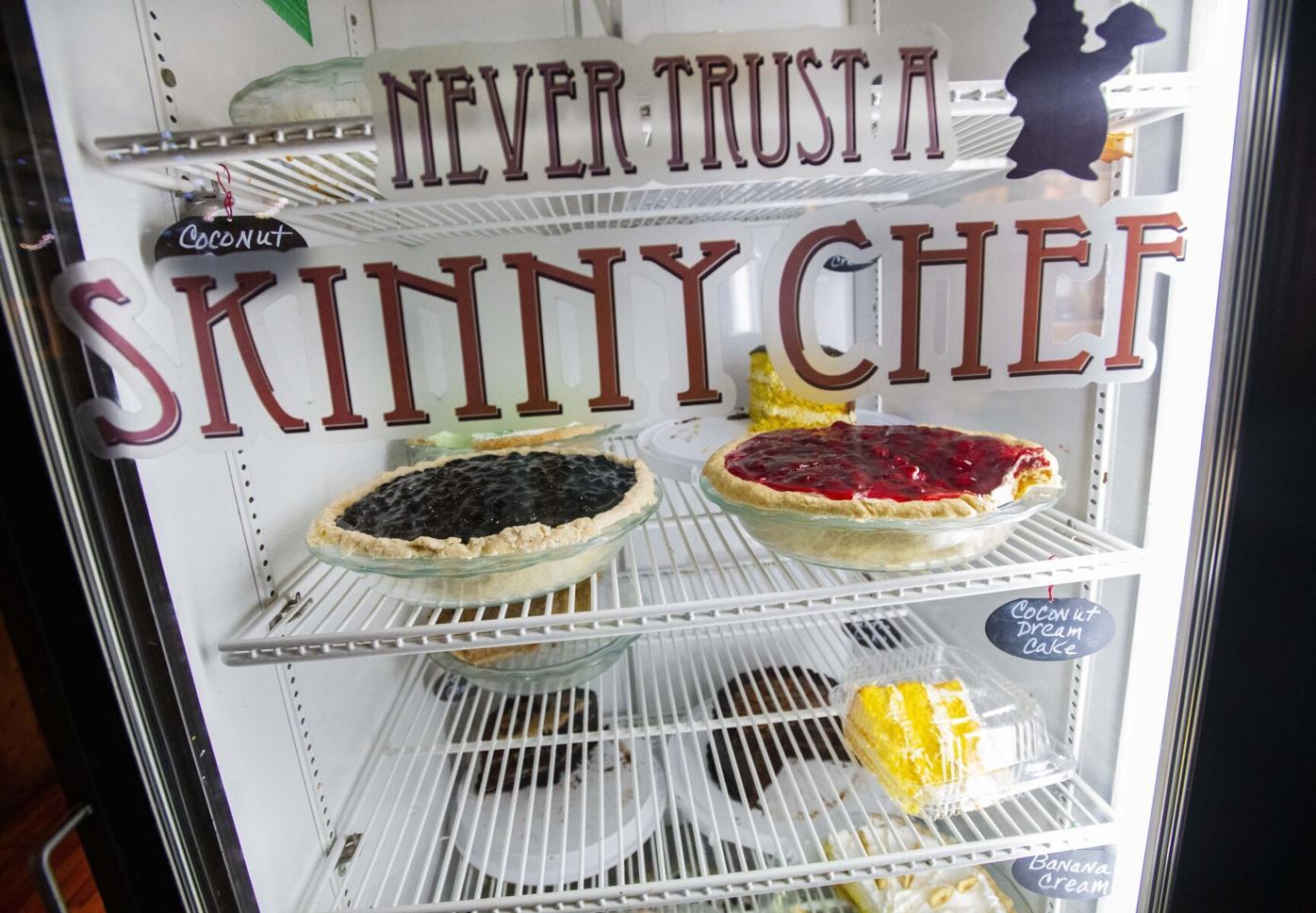 The dessert case at All-Gon Restaurant and Pizzeria is filled with fresh homemade pies and cakes in this August photo. 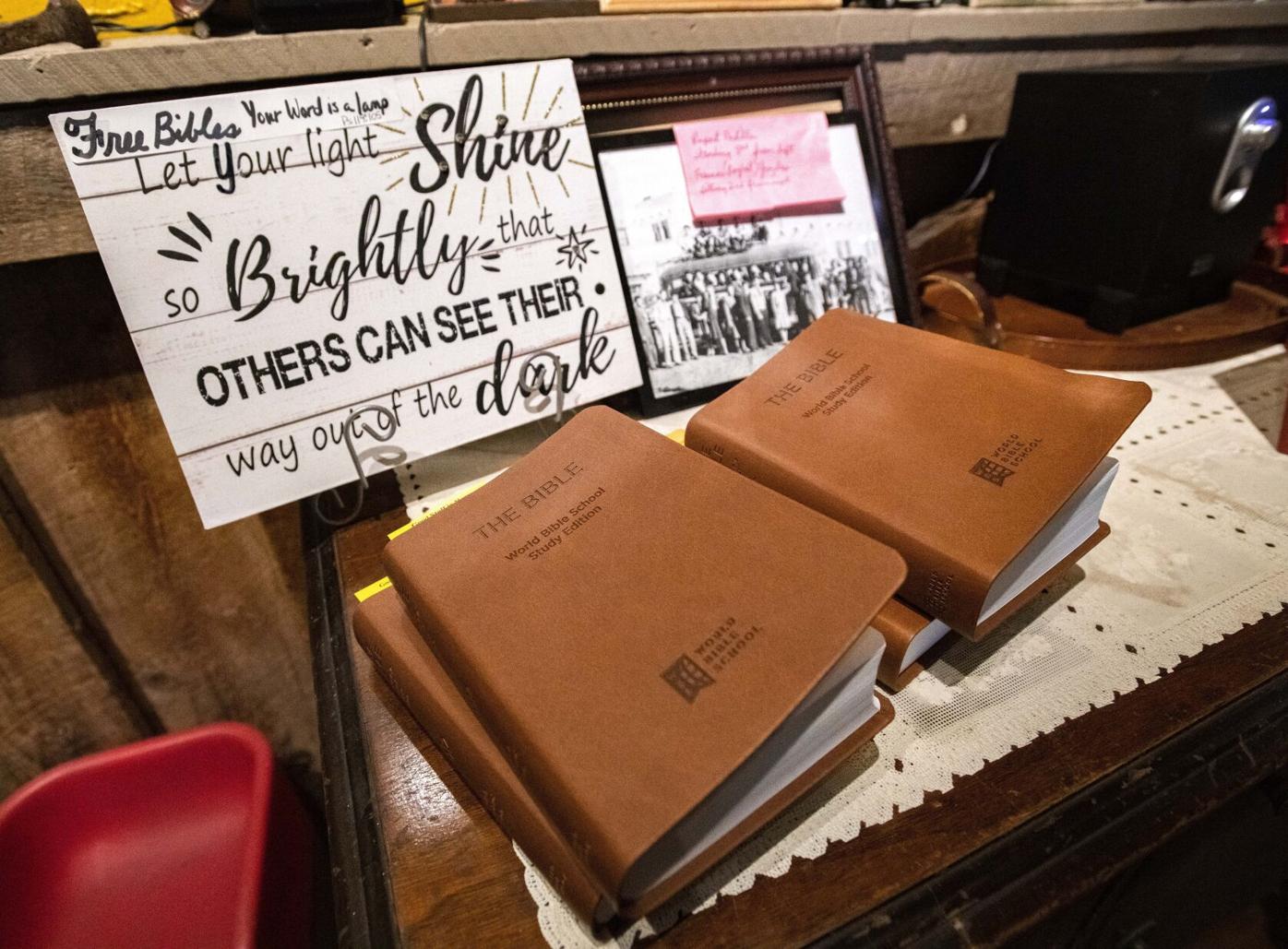 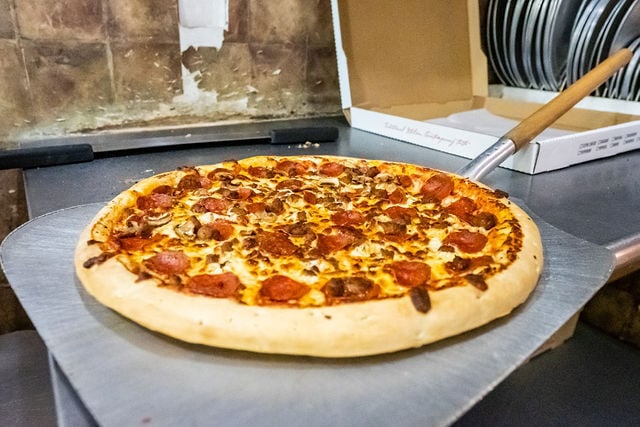 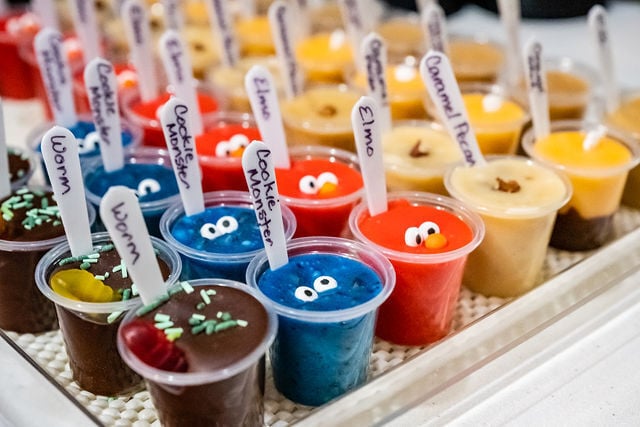 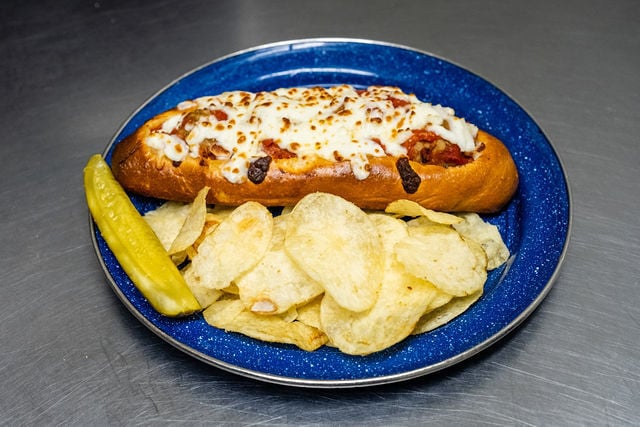 Ken and Lisa Gonzales opened All-Gon Restaurant and Pizzeria along U.S. 160 in Fort Garland in 2006. The restaurant serves a wide variety of food from pizza, burgers, Mexican and fried chicken to desserts of pie, cake and fudge.

Customers look at the extensive menu before ordering at the All-Gon Restaurant and Pizzeria in Fort Garland, Colo., Aug. 11, 2021. (The Gazette, Christian Murdock)

Customers write notes in the guestbook at the All-Gon Restaurant and Pizzeria in Fort Garland.

The dessert case at All-Gon Restaurant and Pizzeria is filled with fresh homemade pies and cakes in this August photo.

FORT GARLAND • Driving U.S. 160 through the dusty outposts of the San Luis Valley, everybody passes the building.

The adobe building on the corner. The walls with colorful murals celebrating the region’s Spanish and Catholic influences. The bright yellow sign with red letters: “All-Gon.” And the mantra: “All-Gon ‘Cuz It’s All Good!”

The restaurant name is a play on the owner’s name.

“Everybody passes here,” says Ken Gonzales, “but nobody knows what’s in here until they stop in.”

What they’ll find is a wood interior much like it was in the 1950s and ’60s. Now the bar slings fresh fudge, not beer. Now the floor is for dining — for eating every slice of that “mountainous” pizza — not for dancing.

Gonzales was a kid during those party days. In 1960, his dad built the grocery store across the street. That’s his dad in the picture frame on the wall. That’s Gonzales’ mom. She’d cook something with anything and everything brought home from the store, the inventory about to expire.

In a tiny town largely fed by rice, beans, tortillas and chile, “we had such a variety,” Gonzales recalls of his childhood. “We tried everything. Everything.”

Now his customers do.

And it’s not just fudge on the sweet side. Another case is stocked with the day’s cakes and pies, all homemade. Slices are as generous as the main courses.

“People say, ‘You have so much, it can’t possibly be all great,’” says Lisa Gonzales, Ken’s wife and co-boss. “Well, it’s gotta be God. Because it’s true, you alone can’t possibly do everything great.”

It’s true, the food identity can be hard to pinpoint here. But the reviews are rave in the guest book sitting on a dais, fit for a preacher. (The former dance floor has indeed been used for worship.)

“Always the best food!” wrote one regular, a local or returning traveler. Wrote another: “Beautiful people!”

Maybe it’s the people, not the food, making All-Gon what it is. The true identity? That goes back to God, the Gonzaleses say.

Both valley natives, Ken and Lisa met at church. They’ve been married 32 years. He was working construction, she was delivering mail. Never did they think they’d get into the restaurant business. Then this building became available.

Reality was harsh. The business reality was harsh — harsh for any restaurateur starting out, let alone one starting in one of their state’s most economically depressed locales.

Money wasn’t the only hard part at All-Gon.

There he’d be, stomping from the steamy kitchen to the dining room to confront some rude, angry customer. This wasn’t him, he knew. The business was changing him.

“The first 10 years, we were open on Sundays,” Ken says, “and that wasn’t working. I was becoming a grouch and really not paying attention to my Christian self.”

He and Lisa prayed for balance. Prayed for an answer.

“We decided that the business would become God’s business,” Ken says.

They’d open the dining room to congregations needing a place. The abandoned church nearby that Ken’s grandpa helped build had fallen into disrepair, and they’d use All-Gon money to restore and occupy it. They’d count on two hands the number of people who came to worship, and that was plenty.

Three times a week, Ken and Lisa started delivering meals to eight households. That has become 24. That 10% has become 20%, they say.

“We think of this as our mission field,” Lisa says.

And that, they say, has made everything worthwhile. They don’t feel the burdens and frustrations that plagued them at the start of business.

Still, work is as hard as ever. With the same staffing issues facing the broader industry, recent days and nights have been longer for Ken and Lisa.

But now they have relief in sight.

The Sierra Madre, or Mother of All Pizzas, boasts all of the house toppings. Other "mountainous" pies range from $8-$18. One is the four-meat Little Bear. Buck Mountain is the all-veggie counterpart. Cat Mountain combines pineapple, ham and green chile.

Green chile is also popularly smothered on the burgers, made with locally ground lean beef. The patty melt ($11) is a favorite, with sautéed onions and swiss between rye.

The "mountainous" titles go for a long list of sandwiches ($9), too — appropriate for the meat piles on baguettes. There's the Trinchera Club (turkey, ham, roast beef, cheese and ranch); the Mount Blanca Bleu (chicken, ham, mushrooms, mozzarella and Alfredo); the Italian-themed Culebra and Philly-themed Mount Princeton.

Homemade sauces are poured over the spaghetti and meatballs, fettuccini Alfredo and chicken parmesan, among other pastas ($8-$14). The chicken fried chicken or chicken fried steak ($13) are more hearty options, served with corn and mashed potatoes and gravy.

Mom's enchiladas ($11) are beloved on the Mexican side. Try those along with chile rellano and tamales on the Fiesta Plate ($15).

Desserts vary, but staples are the chocolate sheet cake (cake coated by chocolate and nut frosting) and the hummingbird cake (vanilla-cinnamon cake with nuts, bananas and pineapple, covered with cream cheese frosting).

A monthly dive into the culinary character of the Centennial State. Send your recommendations to seth.boster@gazette.com

You've seen Johnson's Corner — those big, blocky letters hanging over Interstate 25 north of Denver, impossible to miss, as recognizable as the cinnamon roll boxes found at gas stations across the Front Range. Locals know where the real taste is.