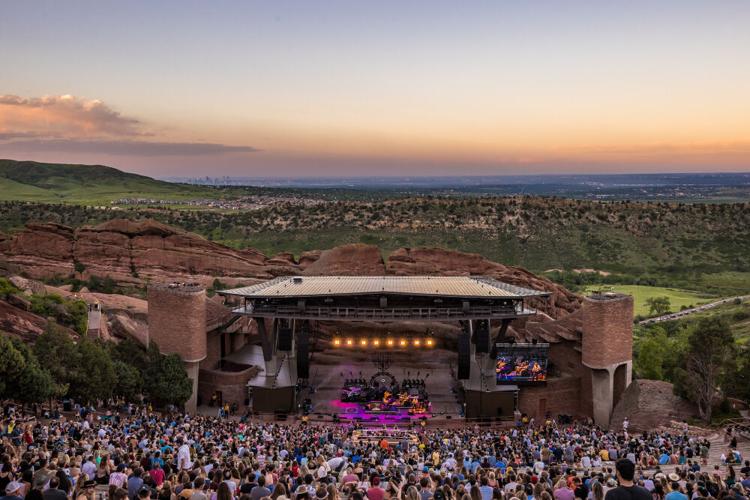 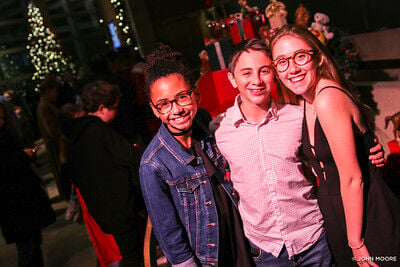 Olivia Sullivent, and Charlie Korman, center, after the opening performance of the DCPA Theatre Company's 'A Christmas Carol' in 2017.

Red Rocks Amphitheatre was the most-attended concert venue in the world last year by far, according to Billboard Magazine. But 2021 was just a pebble compared to what’s going on under the stars in Morrison right now.

Red Rocks hosted 233 ticketed events in 2021, including 177 concerts, 36 movies and 20 exercise activities, attracting a record 1.32 million people. “And we are on pace to beat that record,” said Ginger White Brunetti, Executive Director of Denver Arts & Venues, which manages the iconic amphitheater.

More like “blow that record out of the water.” The venue, which generated a record $48 million in revenue for the city last year, is on pace to crack $54.2 million in 2022, which would mean about 1.47 million event visitors.

Last year, Red Rocks wasn’t able to open at full capacity until June 20 (and yet it still eclipsed its all-time season record by about 250,000 people). This year, it was fully open on April 1. For the first time in history, Red Rocks is not taking a single night off between June 1 and Oct. 31 – and by then, it will likely be booked straight through Nov. 12, when construction begins on a rebuild of that super-pretty, super-lung-taxing elevated walkway south of the stage.

Apparently we’ve all been through some stuff, and people are jonesing to get outside after two very strange summers. But things will really start looking like normal again on Monday (June 13), when the Film on the Rocks season kicks off with Thor: Ragnarok, after concert sets from Devan Blake Jones and N3ptune.

Such a far cry from the desolate summer of 2020, when Red Rocks was limited to a handful of performances with a maximum capacity of 250. But if the early numbers are any indicator, “Live music is well on its way to recovering, and we are glad to see that people are coming out for concerts and enjoying all that Red Rocks has to offer at what looks like a record-breaking pace,” said White Brunetti.

The only thing that might possibly crash this party? Well, you already know the answer to that.

“Everybody is cautiously optimistic,” said Brian Kitts, Director of Communications for Arts & Venues. “We have all just been through something nobody ever expected in our lifetimes. I think we are always going to be looking over our shoulder to see if another dangerous variant is coming, or something else that is going to mess with our lives somehow. But I can tell you: We are never going to take for granted the simple joy of being able to hang out with friends at a concert ever again.”

Two random things to look for from the Tony Awards on Sunday night. First: Mary-Louise Parker could become the first actor to ever receive consecutive Best Actress in a Play Tony Awards if she wins for “How I Learned to Drive.” And she would become just the fourth person to win the category three or more times, joining Julie Harris, Jessica Tandy and Zoe Caldwell.

Second: While seemingly everyone who has seen “A Strange Loop” is willing it to win Best Musical, there are reasons to be skeptical that Michael R. Jackson’s story about a queer young Black man’s coming of age, which leads all productions with 11 nominations, will take home the top prize.

The Tony Awards are no more about what’s truly “best” than the Academy Awards are about the truly “best” films. Out of the 650 Tony voters, the biggest block are out-of-town presenters. And to them, the Tony Awards serve as their one big chance to market the new national touring productions that are coming to the heartland. The most marketable nominee is “Six,” and a Best Musical belt notch would make it that much more of a sure-fire commercial success.

It’s wrong and it’s racist, but “A Strange Loop” is going to be a much harder sell to overwhelmingly White theater audiences in Middle America. (Which is one reason this show desperately needs to be seen there.) In the words of “The Wrap” prognosticator Robert Hofler: “The voters will pick the half-dozen Spice Girls of ‘Six,’ which dramatizes the wives of Henry VIII, over a show about ‘a fat, Black, queer body.’ ”

Meanwhile, frequent Denver Center castmate Olivia Sullivent, who also appeared with Korman in "The Who’s Tommy,” is now an 18-year-old student at El Camino College in Torrance, Calif. She appeared in a short film last year called “Growing Fangs” for the Disney’s Launchpad streamer channel. And she’s back in Denver preparing for a one-night-only staging of “Stages,” a musical created by Karen Tobey, her vocal coach and owner of Colorado Children’s Theatre in Evergreen, on June 17 …

The newest episode of “So You Think You Can Dance” featured the return of choreographer Mandy Moore, a three-time Emmy Award-winner and Colorado native. She handled the choreography duties for Season 17, Episode 4, “The Big Cut–Choreography Round,” which determined who has advanced to the Top 12. It aired Wednesday on Fox and can now be seen on HULU. Moore graduated from Summit High School in Breckenridge.

Theatre Esprit Asia, which focused on Asian and Asian American stories until it fell into dormancy with the retirement of founder Maria Cheng in 2018, is back as Insight COlab Theatre, which bows June 16-19 with a musical called “Say My Name.”

Cheng launched TEA in 2012 as the first and only pan-Asian theater company in the southwest. “There was a gap, a need, in the Colorado theater milieu to tell immigration stories of the contemporary Asian diaspora and to provide creative opportunities to Asian-American actors, playwrights and directors,” said Cheng, whose company is now being revived as a collaboration between five women.

“We are the same theater company that you've always loved, but we are spotlighting more inclusive, innovative, and inspiring works to illuminate our shared human experience,” said new Artistic Director Cecilia J. Pang, who is joined by Tarika Cefkin, Jennifer So, Faye Yuan Kleeman and Dakota Makinen.

This week, Gov. Jared Polis renamed the Mountain Lion Trail at Golden Gate Canyon State Park as “Rocky Mountain High Trail” In honor of the 50th anniversary of the release of John Denver’s “Rocky Mountain High,” which is considered Colorado’s second state song. “My parents took me to my first concert to see John Denver at Red Rocks in 1980 when I was 5,” Polis said. “Here in Colorado, we’ve always known that our majestic mountains, our bright blue skies, our starlit nights and our forest and streams were the stuff of legends – but John Denver made them the stuff of world-famous lyrics that span genres and generations.” …

Meanwhile, the Colorado Symphony announced a 50th anniversary celebration of the song to be presented Sept. 8 at Boettcher Concert Hall.

Colorado’s two-time “Poetry Out Loud” state champion Aidyn Lorin Jai Reid of Fountain Valley High School in Colorado Springs finished second in Sunday’s national championships. She earned $10,000 for herself and $500 for her school to purchase poetry materials. “Poetry Out Loud has helped me explore my understanding of writing, learning and emotion,” she said in a statement issued by the Lighthouse Writers Workshop. You can watch the announcement here.

Central City Opera’s 90th season opens July 2 with “The Light in the Piazza,” followed by “Die Fledermaus” on July 9 …

Longtime local radio personality Tony V announced his departure from KS107.5 FM after 25 years. "For a quarter century, I have had the privilege and honor of wearing gold and purple and representing the No. 1 Hip-Hop station in the Mile High City," he wrote on social media in saying he will not be renewing his contract.