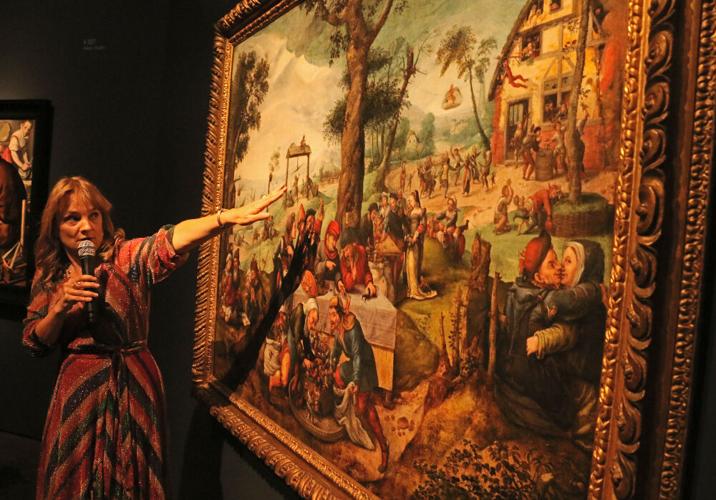 Curator Katharina Van Cauteren of the Phoebus Foundation explains all the many shenanigans to be found in Frans Verbeeck's artistic cautionary tale titled 'The Mocking of Human Follies.' 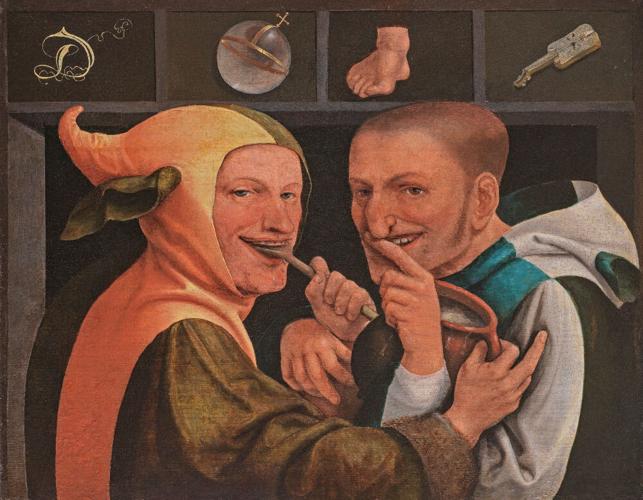 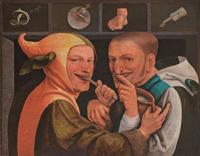 Jan Massys' 'Rebus the World Feeds Many Fools': Think of these guys as the Garth and Wayne of 1530 Flanders. 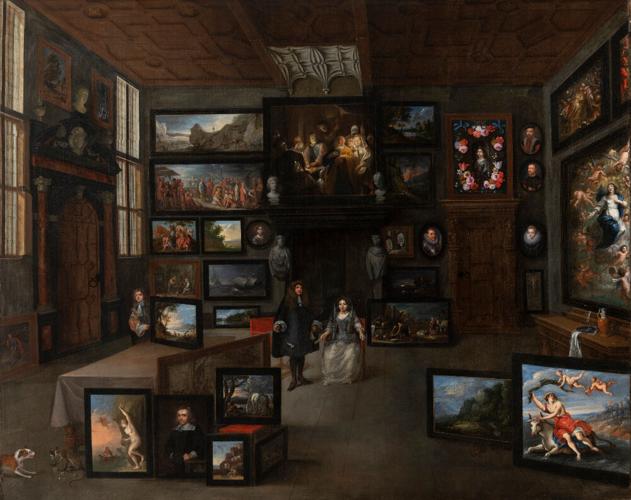 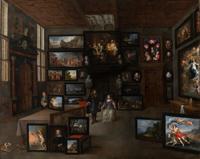 So if you want to brag about your art collection into eternity, here's what you do: Commission an artist to paint you ... and your entire collection. And if you're really unscrupulous, have them paint you with works you don't even own. You'll confuse scholars for centuries. (Peeter Neefs II and Gillis van Tilborgh's 'Portrait of an Elegant Couple in an Art Cabinet.') 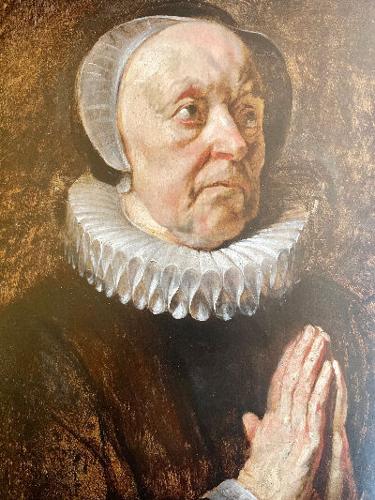 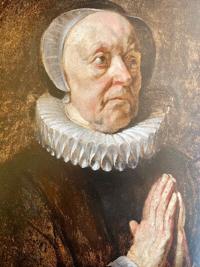 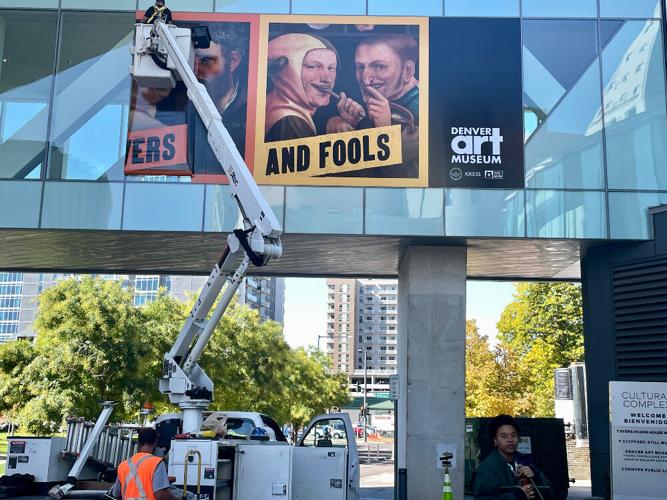 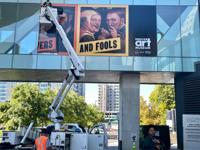 'Saints, Sinners, Lovers and Fools' will be on display in the Denver Art Museum's Hamilton Building through Jan. 22.

Video: Dr. Katharina Van Cauteren, Chief of Staff and curator for the Phoebus Foundation in Belgium, discusses her new exhibit in the Denver Art Museum for readers of the Denver Gazette.

You might not think of October 2022 as the wokest of times for the Denver Art Museum to be trotting out a massive collection of masterworks by 300-year-old Dead White Flemish Guys.

But curator Katharina Van Cauteren thinks the newly opened “Saints, Sinners, Lovers and Fools” is relevant to all sorts of both current and timeless social themes. Taken as a storyboard, she said, these oil paintings, never before shown in the United States, tell tales of God and the afterlife. Of ambition and vanity. Prestige and status. Love and friendship. Passion and the fiery wages of sin.

Why, it sounds downright Shakespearean. Even Shonda Rhimesean.

But they can’t possibly offer much insight into pressing contemporary issues of the day like, say, systemic racial inequities — can they?

“The way these paintings are presented, I think we manage to make many comparisons with how it is today so that it is not just an exhibit about these people living far away and a long time ago,” said Van Cauteren, one of the world’s leading scholars — and champions — of the period. “If you just look a little bit closer, really nothing has changed. Whatever your background is, whatever your age is, whatever the color of your skin is — it’s now.”

Turns out, it’s also kind of funny. And, for someone (like me) who had 12 years of Catholic schooling, it’s a surprisingly relatable demonstration of all-consuming repression at all-out war with monster egos.

For the "Jeopardy"-challenged (also like me), a reset: The Flemish are the Dutch-speaking people of Flanders, located in the northern portion of Belgium. Did you know that Flanders, which is about the size of Maryland, was the economic center of the world for about 300 years and, as Van Cauteren colorfully puts it, the Hollywood of the 16th and 17th centuries? (I didn’t.) It was also a period of scientific breakthroughs and great enthusiasm for everything new and novel, including the first world atlas, the first dissection of a human being  and the invention of oil paints, which for the first time made paintings look “almost as if they are glowing from the inside out,” Van Cauteren said.

“Saints, Sinners, Lovers and Fools,” presented in a historic collaboration with the Phoebus Foundation in Belgium, introduces U.S. audiences to the Big Three of the period: Peter Paul Rubens, Jacob Jordaens and Anthony van Dyck (among many others), in ways we haven’t seen them before.

Observers of the day thought these artists were now capable of capturing the divine on canvas. Which made for whole new genres of both religious propaganda and scathing satire. The buffoonery of man is a major (and hilarious) theme of these painted cautionary tales aimed at both fools and hypocrites.

Flanders’ geographic proximity to rivers made its citizenry very rich. And if you had money, you had a big house with lots of wall space — so you invested in paintings to fill them. Often paintings of themselves. The rich turned commissioned portrait-painting into a commercial cottage industry. Think of it as the dawn of selfies. Problem was: “Those portraits could make you seem vain,” Van Cauteren said. “And if you want to go to heaven, vanity is not a good idea.”

The Flemish were very naughty — and yet also believed that God was everywhere. The afterlife was a constant concern — and also a stacked deck. As in, they believed only one in maybe 100,000 would wind up in The Good Place. A pious man, then, ideally should be praying all day long. (Yeah, right.) So those clever scamps invented a workaround: They hired artists to paint them praying.

“Some 15th century smart (bleep) came up with the idea that while you are out making money or mischief, your portrait is praying for you," she said. (So, maybe they didn’t think all that much of God’s attention to detail after all.)

Artists were also hired to create paintings to constantly remind people that despite all their bravura and money, “we are all just silly fools,” Van Cauteren said. And there will be consequences.

One representative painting is called “The Mocking of Human Follies,” by Frans Verbeeck circa 1550. (It sold for $3 million in 2014.) Here’s the cautionary tale it tells:

“If you look in the back, you will see entire shiploads of these (literally) tiny jesters arriving, and in every scene these little men are infecting others with their foolishness,” Van Cauteren said. There’s lots of drinking, dancing and gambling. A nun who has run away from the monastery is kissing a man. Bestial urges abound. It looks like tons of fun — but it isn’t.

“Because notice in the corner, there is a house that is on fire,” she said. “And it’s telling us that if you act this foolishly, you will burn in hell.”

So sad: Overindulgence in the pleasures of life will only buy you a swim in the lake of fire.

Half the fun of “Saints, Sinners, Lovers and Fools," for me, was discovering these old paintings through the quirky and childlike enthusiasm of Van Cauteren, who calls Reubens “the Steven Spielberg of the 17th century.”

“She talks about these paintings as if they are friends and neighbors,” said DAM Director Christoph Heinrich. If only she could be there every day. She can't, but Van Cauteren has some guiding advice for upcoming visitors.

“When I look at a painting with someone, the first question I am always asked is if I think it’s beautiful,” she said. But that’s the wrong question.

“The first question I ask is why did the artist pick this particular subject? Why would a patron want this in their house? Why was it popular at the time? Why did an artist work in this particular style?

“If you start asking these questions, it very quickly becomes a much wider storyline. It becomes about patterns in history. It becomes about economics, religion and politics. Suddenly the painting becomes this gateway to the past. If you scratch a little deeper, suddenly you come to realize that all of these paintings that were made 300 years ago and far away are about recognizable human beings.

"In the end, this exhibition is about you and me. It's about who we are as people.”