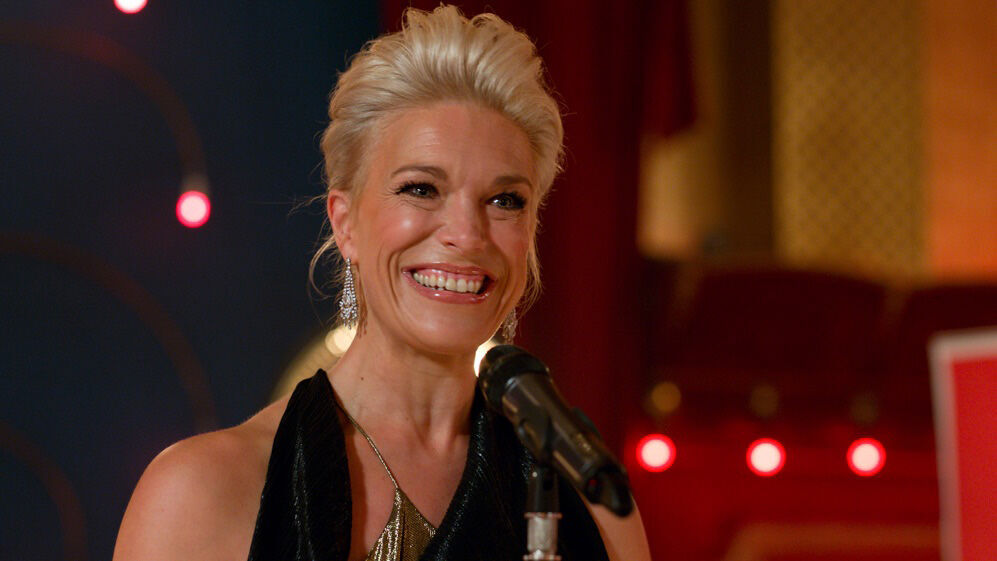 To call Apple TV+’s comedy series “Ted Lasso” a surprise hit would be a gross understatement.

Not much was expected from a TV show that was based on characters from a series of commercials promoting NBC’s Premier League coverage. But the programs’ unrelenting positivity was exactly the tonic audiences needed when “Ted Lasso” premiered last August with the world struggling through the COVID-19 pandemic.

Almost equally as surprising was the performance of veteran actress Hannah Waddingham. An accomplished singer and theater performer, most TV viewers know Waddingham for her role as the brutal Septa Unella, who tortures Cersei Lannister, played by Lena Headey, in “Game of Thrones.”

As the owner of AFC Richmond, the fictitious team Ted Lasso coaches, her character of Rebecca Welton could easily have been typecast as a villain. But over the course of the first season viewers watch Rebecca grow and become just as likable as her team’s coach.

With season two of “Ted Lasso” set to premiere July 23, I spent some time chatting with Waddingham about her “Ted Lasso” experience, a time she was starstruck and a crazy moment on the set of “Game of Thrones.”

Hannah Waddingham: Terry, am I right in thinking you’ve got an AFC Richmond top on?

G: You are correct.

G: Thank you. Before we get started. I have a question from a friend, because I told her I was going to be speaking with you so this is a little bit random, although most of my questions are. How many of those biscuits did you have to eat during the first season of Ted Lasso? And did you ever say, I’m never eating another biscuit again, for as long as I live?

HW: I’ve eaten so many biscuits. It’s actually like my own body weight in biscuits and season one, they were so desperately unpalatable, but season two, they’ve got their s$%t together and they’re actually almost too nice because then I find like I’m popping one in between takes and that just plays carnage and you can’t fit into your pencil skirts anymore.

G: When did you know you wanted to become an actress?

HW: I don’t remember not thinking that. I remember finding out that people sat behind desks and offices and thought, wait, what? I was just like, I want to be a singer. I want to be an actress. I want to dance around and never get bored of doing all of that. It really, it didn’t cross my mind to do anything else. I don’t know what I would’ve done, actually. Had I had no success, I would have been floundering like a lunatic.

G: What’s the best part of your job. And what is the worst?

HW: Worst, is the hours in terms of tiredness. You get so bored of looking at your own face in a dressing room mirror. I’d rather look at anyone else’s face. The best part is getting to park yourself and take on the clothes and listen to others and receive information and give out information as a different person. You know, when there are times when you don’t feel like being yourself, it’s a great catharsis.

G: What’s been one of your strangest or funniest moments while on set and it doesn’t have to be “Ted Lasso” necessarily, but on any set.

HW: It was when we were filming the Walk of Atonement in “Game of Thrones.” Things were being thrown at myself and Lena Headey. And there was a moment when something was thrown at her and it stuck to her and it was just, we were in trouble and they had to cut because I’m obviously not meant to be laughing as the shame nun, terrible trouble. And yeah, that I have to say that was, that was, that was the funniest moment for me. I was in big trouble because I’m a terrible, giggler.

G: What was stuck to her?

G: Which of your fellow cast mates do you hang out with the most?

HW: (Singing) Juno Temple, yeah. She and I got a thing going on.

G: I guess it makes sense that you have a lot of scenes together.

HW: Yeah. You know, that could not necessarily work but it does. We love each other desperately.

G: What three words would you use to describe yourself and Rebecca?

G: What are some things that you did to pass the time during the pandemic?

HW: I hung out with my little person and it was the greatest luxury to be afforded some downtime with her in a sea of uncertainty and upset in the world. It was the most amazing thing to just be able to be in my garden with her and, and realize the privilege that I had of having a garden, and just being able to not be anywhere and just lock into her.

G: What is your all time favorite song?

HW: Oh gosh, I can’t, I can’t do that. I come from an opera singing mother and a country and Western loving father. And I’m a massive fan of swinging big band. So I have so many influences. I couldn’t possibly, I would be doing other songs of disservice if I, if I said that.

G: Who are your heroes in real life?

G: What is a passion that you have that people might find surprising?

G: Tell me about a time you were starstruck.

HW: Dustin Hoffman. Couldn’t speak. My mom was in a film that he directed called “Quartet” and they wanted proper opera singers. And my mom was brought in, even though she’d retired and I got to meet him at the premiere and I genuinely thought I was going to be sick, I couldn’t cope with the amount of talent that was standing in front of me, and what a beautiful elegant man he was.

G: What is your idea of happiness?

HW: My baby being safe and well forever.

G: What is your motto?

HW: Treat others as you wish to be treated.

This interview has been edited for length and clarity.