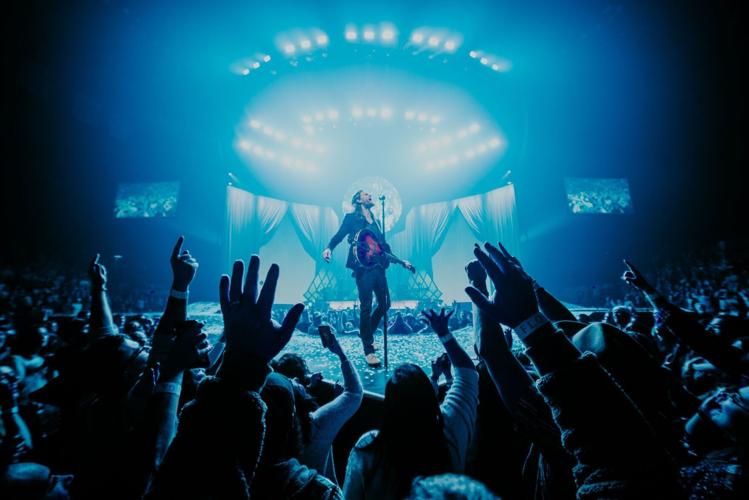 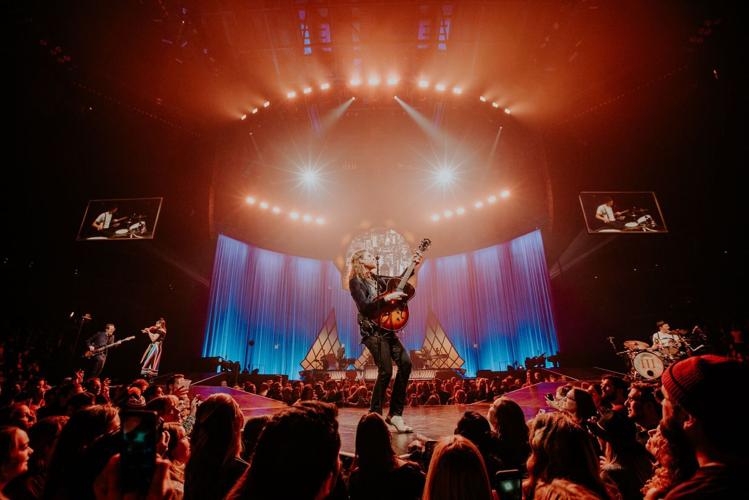 Lend him an ear, and Wesley Schultz will serenade you across the expansive range of human emotions and inspire toe-tapping — even if you’re confused whether “Ho-Hey” is a break-up song or a wedding march.

“People hear what they want to hear. It’s mostly how they feel when they hear it,” said Schultz, Denver’s rock-star-of-the-first-magnitude front man for The Lumineers. One of the most successful bands with sonic roots in the Mile High City, The Lumineers release their fourth studio album, “Brightside,” on Friday; and its first single, the title track, hit #1 on two Billboard charts.

“This album is more a feeling than a particular point or message,” said Schultz in a telephone interview. “The music makes you feel.”

The “Brightside” album cover features an out-of-focus photograph of a hand reaching up, palm open.

“That’s my hand in the sky,” said Schultz. “It’s outside my yurt in the Catskills. It’s a hand out of a sunroof, even a hand out of the earth — back from the dead. For us, it brought up feelings of youthful indestructiveness, when you do something you know you shouldn’t be doing, but you do it anyway. Like the first cigarette. Or riding motorcycles. There’s that element that you could maybe get hurt, but you also feel really alive.”

The Lumineers, in important ways, came to life in Denver after Schultz and co-founder Jeremiah Fraites relocated from the East Coast in 2009. “Brightside” drops nearly 10 years after The Lumineers’ 2012 self-titled album with the hits “Ho Hey” and “Stubborn Love” that catapulted the band into international fame.

Over the past decade, the band racked up 21 #1 hits, Grammy nominations, world tours. Motorcycle powerhouse Triumph presented Schultz — known to write songs while riding motorcycles — with his customized 1200 XC Scrambler. On the fuselage, hieroglyphics spell “Cleopatra”— another hit song and album title. The brand Frye designed eye-catching white leather, mid-lace boots for Schultz and dubbed them “The Wesley.” The Lumineers were the first band to book and sell-out a three-consecutive-nights home-stand at Fiddler’s Green Amphitheatre. The band played the grand opening of Mission Ballroom. Prior to the pandemic, The Lumineers sold out a show scheduled for Coors Field.

Asked what sparkles most in his memory, Schultz said, “It can be a blur. When that all was happening, I had a strange, ominous feeling like it happened too quick and could go away too quick: easy come easy go.”

“It exploded,” Schultz said of The Lumineers’ success. “Opening for U2 was huge, playing the White House a couple times and meeting President Obama: Those are highs.”

So was touring with Tom Petty: “I got to tell him my wife walked down the aisle to his song ‘Walls,’” said Schultz. “They say never meet your heroes, but it can go beautifully, and that interaction with Tom Petty, now that he’s gone unexpectedly, it’s very special. That was a high of highs.”

Schultz also finds gratification in the relationship between the band and their audience.

“One of the highs approaching our 10-year mark is that we built trust with fans,” he said. “We take them different places, and sometimes it’s not easy.”

But “Brightside” bangs the drum of optimism.

“My mom said, ‘Cheer me up with this. I hope this album’s more happy-clappy.’ And I thought, ‘What does that even mean?’” said Schultz. “This is optimistic without being cheesy — and that feeling is in a lot of the songs. A lot are optimistic, but not blind to the pain or the troubled times we’re in. There is an element of stubborn optimism. It’s like if we try to hold our breath, we still take another breath. It’s in our DNA: We’re wired to be optimistic.”

The new song “Rollercoaster” with Schultz’s voice nimbly sliding up and down the scale, may contain the most poignant lyric spawned by the pandemic: “Everyone was only dyin’ to live.” The Lumineers songs by Schultz and Fraites are not bubblegum pop earworms regardless of any campfire folksiness or catchy call and response audience participation ditties.

“They’re subversive,” Schultz said of the songs. “I’m trying to get somewhere with listeners, but not hit people over the head. It’s creeping in to you, like a Trojan horse. You’re feeling an emotion you didn’t want to feel. I’m asking ‘how can I mix the salt with the sweet?’ I have a big fascination with what can get past defenses. Happy to sad. ‘Gloria’ [on the album “III”] is a great example.”

Asked which female recording artist he’d most like to sing a duet with, Schultz, not missing a beat, said, “I really like Sia. She has this insane voice that breaks up, like a Stevie Nicks level. She’s a gifted songwriter, the total package, and has an air of mystery, covering her face with her hair. She’s massively talented, and you can’t take your ears or eyes off her.”

Schultz distinguishes The Lumineers with his no-holds-barred lead vocals. He did, as a lad, sing in a school choir. “There was a solo. You had to try out for it. I was really scared, but I thought ‘I can do this.’ The guy who got the solo: I thought I was way better. So even at a young age, even if I wasn’t very good, I had the belief I was,” Schultz said. “I had inner swagger. Now it seems silly, but it was wind in my sails.”

“There’s a certain vocal break, a harmonic that happens. It almost distorts. It’s something I always tried to find,” Schultz said. “When we find a key for a song, I push the key until my voice breaks because it feels more emotional. If I don’t go there, and I hear myself back, I’m ambivalent to what I’m singing. It can sound lazy or disinterested.”

Prior to performances, The Lumineers follow a routine: “We’ll meet up 20 minutes before, pick out a few songs and run them acoustically to get warm. Then right before, we all shake each other’s hands, like businesspeople. We look each other in the eye and say, ‘Have a good show.’”

On stage, with his namesake boots, the rangy Schultz might sport a groovy floral shirt by Sir Paul Smith, a broad-brimmed hat over his trademark long, strawberry blonde hair. His necklace with a stegosaurus — Colorado’s official state fossil — was a good luck charm from his then-girlfriend now wife, Brandy.

The couple have two young children. Schultz’s go-to nightly lullaby is “The Wizard of Oz” tune “If I Only Had a Brain.”

Schultz, with his genius for songwriting, singing and playing guitar, obviously has a brilliant brain to match his heart, his courage, his sense of home. Schultz memorialized his father, a clinical psychologist, in a heartachingly lovely elegy titled “Long Way From Home.” The musician credited his dad’s indelible imprint made both through music he listened to in the family home and his establishment of the household as a place open to and accepting of emotions.

Schultz said, “Being raised by a psychologist, in that sort of family, there’s a fascination with expressing my feelings.”

Colleen Smith, based in Denver, writes about arts and culture.

Comedian Korey David has a rich palette of life experiences to pull from during his time at the mic. The Denver comic will headline the Habitual Offenders Comedy Showcase on Thursday at Loonees Comedy Corner. The monthly event, hosted by Tracy Kellet, features a panoply of Colorado comics, including Kate Strobel, Justin Leger and Cody Ullrich.

Where is your favorite place to watch fireworks?

Compared with 2018 and 2019 — pre-pandemic years — the numbers have dipped slightly under a reservation system aimed at crowd control. Still, Rocky Mountain National Park remains one of America’s busiest national parks, with 4.4 million visitors counted in 2021.