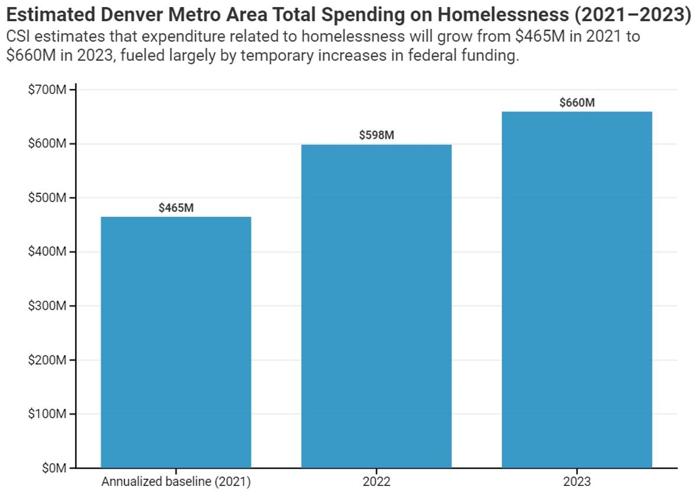 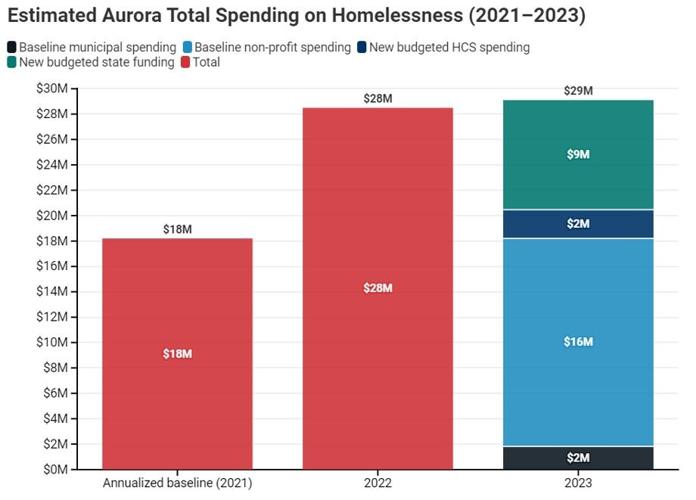 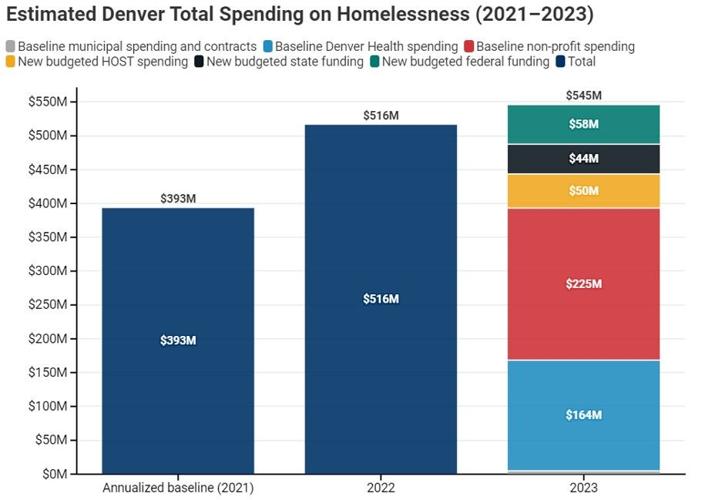 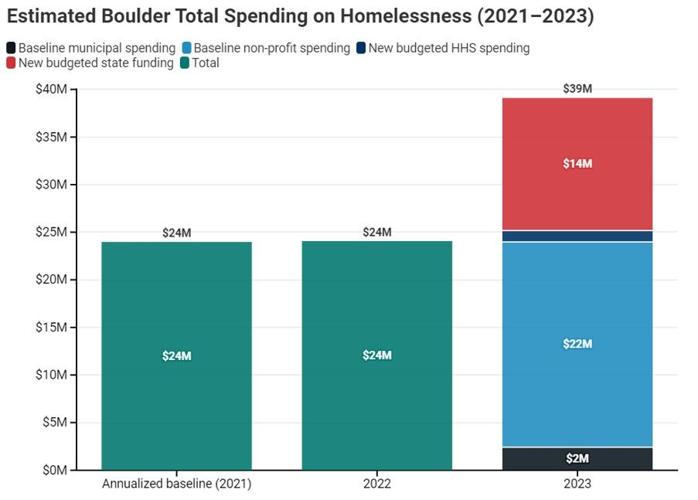 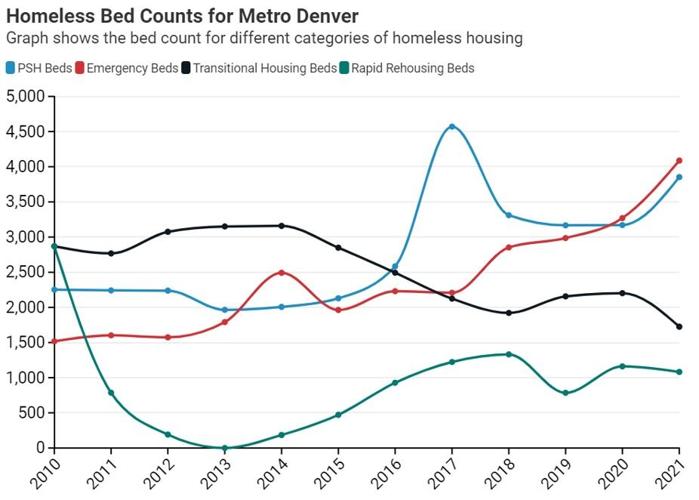 Local governments and nonprofits are on track to spend nearly $2 billion over a three-year period to tackle homelessness in some counties in the Denver metro area, according to a new study by a nonpartisan think tank. Although, some projections in the study may be premature and two other Colorado think tanks plus a service provider swiftly voiced concerns about the study's methodology, calling its findings "purposefully misleading."

The explosive projected growth in spending from 2021 through 2023 reflects the gravity of the challenge that the public and private sectors face as they struggle to contain homelessness in Colorado's biggest cities. Indeed, the study from the Common Sense Institute said the number of homeless people grew by double digits from 2020 to 2022 – levels unseen since 2008 for one specific population.

The study — Homelessness in Metro Denver: An Opportunity to Transform Resources & the Existing System — said public and private entities in the Denver metro area are projected to spend at least $1.7 billion on efforts to address the issue.

Researchers at the institute expect the amount to increase from $465 million in 2021 to $660 million in 2023, a 42% spike. The money includes allocations for shelters, services and health care services for homeless people.

To put that amount into perspective, the estimated 2023 spending alone dwarfs the $433 million increase legislators approved for school districts in fiscal year 2023. It's also bigger than Boulder County's entire proposed $527 million budget for next year.

Whether metro Denver can sustain the same level of spending remains unclear, as a significant portion of the allocation comes from one-time federal pandemic relief and recovery dollars.

“This report is a snapshot look at how much is being spent, it’s not intended to criticize,” CSI President and CEO Kristin Strohm told The Denver Gazette, adding it “is an extremely conservative estimate.”

In a news release, Strohm said she hopes the study brings a "critical eye to the issue with a transparent lens on the funds being spent to address the crisis."

"There is a need to think about how we coordinate our homeless services and how we prioritize and spend the finite resources to maximize impact," she said in the statement.

The study, which CSI said took six month to complete, is a follow up to a similar report the group released last year, which garnered national attention and criticism questioning its findings.

The group's key findings this year noted a rise in spending, alongside a spike in homelessness, a call for a new comprehensive regional strategy and more transparency in how resources are used throughout the Denver metro area.

“As resources to address homelessness have increased annually, the unsheltered and chronically homeless populations have also increased," the study said. "Housing affordability in Colorado has plummeted, overall price levels are at record highs due to inflation, and the state’s housing inventory is dangerously low. This is a concerning precursor for sustained elevated levels of newly homeless."

The study did not examine the causes behind the increase in homelessness.

“The dollars that are being spent are increasing because there is more public demand to try and solve this interest,” Strohm told The Denver Gazette.

The total number of homeless people in the Denver metro area climbed by 13% from 2020 to 2022, and the "unsheltered" population grew by 33%, the report said. The study defines "unsheltered homelessness" as people who sleep at public or private places not designed for regular sleeping, such as a car, park, abandoned buildings, buses and camping grounds.

The study estimated that, next year, the cost for each person who is homeless or receiving permanent supportive housing in the Denver metro area will hover between $31,428 and $61,871. In Denver, the range is between $37,309 and $73,450.

In looking at metro area spending, researchers sought to first find a baseline figure by determining how much nonprofit service providers and public entities spent in 2021 on initiatives exclusively focused on addressing homelessness.

They then collected financial information from 48 nonprofit organizations, and talked to stakeholders such as the Downtown Denver Partnership, the Denver Rescue Mission, the Colorado Coalition for the Homeless and Denver Mental Health Initiative, and also looked at line-items in the budgets for Denver, Aurora and Boulder.

The study assumed the 2021 baseline spending figure would not decrease in the following years. For 2022 and 2023, researchers tallied up expenditures not counted in 2021 and then looked at recent allocations at the state and municipal level, ballot initiatives and federal dollars.

In looking at Aurora's future allocations, the study inaccurately states that the city has approved a plan to form a new comprehensive homelessness reduction system. Although such a plan has been proposed, it has not been approved by the city council.

The study also looked at spending and homelessness reduction results in out-of-state municipalities — among them cities in Texas that leaders from metro Denver recently visited on trips meant to study strategies to curb the social woe.

CSI’s report said San Antonio’s Haven for Hope, which has an annual budget of $20 million, has reduced homelessness by 80% since the campus opened. A Haven for Hope spokesperson told The Denver Gazette its annual operating budget is $25 million to $27 million annually and the city's downtown area has seen a 77% reduction in its unsheltered population since its 2010 opening.

The report said Houston’s The Way Home program has helped the city reduce homelessness from 8,471 in 2011 to 3,223 this year. Houston has seen a 63% decrease in homelessness since 2011, according to The Way Home.

Strohm and Chris Brown, CSI’s vice president of policy and research, noted researchers only included the spending by Aurora, Boulder and Denver – and not more cities – and there are far more organizations working in this arena than those contacted for this study.

The institute does not have the resources to research every city in the metro area, Strohm said, adding the study looked at the same three cities it did last year.

The study also did not include expenditures from affordable housing authorities, such as the Denver Housing Authority and Aurora Housing Authority, because most of it is related to low-income housing support, Strohm said.

The limitations underscored CSI's contention that the study likely undercounted the total amount metro Denver is spending on homelessness.

But two Colorado think tanks were quick to raise the alarm about CSI's study. The Colorado Fiscal Institute and Bell Policy Center issued a joint release saying the research organizations "have serious concerns about the methodology" in the CSI report.

"CSI's report artificially inflates the amount of money spent in addressing homelessness, and come to extreme conclusions about the costs associated with people who are unhoused in Denver," the release said.

“The biggest flaw with this report is that the authors didn’t give any meaningful context to their expenditure figures,” Colorado Fiscal Institute senior economist Chris Stiffler said in the release. “Just giving a dollar amount without any context is like a doctor telling you a test result without telling you whether the number is a good or bad one.”

The report's use of expenditures from Denver Health "significantly, and unnecessarily, inflates total costs," the release said, noting Denver Health's and nonprofit spending makes up a sizeable portion of funding looked at by the CSI study.

The study "neither serves the public interest nor furthers constructive conversation about how to address the underlying problems," the research organizations' release said.

The region's continuum of care, Metro Denver Homeless Initiative, also issued a warning about the CSI study, calling it "purposefully misleading" and an overestimate of per-person spending.

“MDHI identified several key inaccuracies to CSI during the creation of this report,” MDHI Executive Director Jamie Rife said in a news release. “However, the researchers chose to release the report and include these inaccuracies, knowing they would lead to inflated per person spending and misinformation in the public."

MDHI pointed to the study's analysis of dollars spent to support people in housing and other programs related to homelessness, which would more accurately be "the cost of poverty, housing instability, food insecurity, healthcare costs, and homelessness in the region," the release said, and not attributable to homelessness alone as the study title suggests.

"To obtain the cost per person, the authors added the costs of permanent housing, homelessness services, healthcare, and programs related to housing and food insecurity over several different years, added them up and divided by the number of people experiencing homelessness and those housed in permanent housing on a single night and published it. This is purposefully misleading to the public," the MDHI release said.

CSI double or sometimes triple counted expenditures, MDHI's release said, adding that "the authors failed to account for how funds flow between the federal, state, local governments, and nonprofits. MDHI’s own budget, included in the report, is evidence of this as our organization serves as a pass through for funding."

CSI only looked at dollars specifically used for spending on homelessness, and not coupled with other services, Strohm said. The CEO also said the institute took steps to avoid double counting and verified its numbers with organizations.

Rife reiterated that MDHI had "several conversations with CSI" during the creation of its study about the continuum's concerns with its methodology.

“Homelessness is complex with individuals having a variety of needs at varying costs. For example, our data show that in the third quarter of this year, the average assistance via our Housing Stability Flexible Fund was a mere $975 to either prevent homelessness or rehouse a household in our region," Rife said. This is a sharp contrast to the numbers included in this report and demonstrates the wide range of costs, depending on the need of the individuals and families.”

There are successful homelessness reduction programs in the area, Brown said, something the study also mentioned.

“While there are successful program models across the Denver metropolitan region such as Denver’s Social Impact Bonds, non-profit organizations’ youth programs, sheltering efforts focused on adult men, and Aurora’s outreach teams, the rise in the unsheltered and chronically homeless population reflects broader system-level weaknesses that must be addressed by a comprehensive regional strategy,” the 2022 CSI report said.

Denver’s supportive housing program proved impressive, according to a report from the Urban Institute last year. Hundreds of chronically homeless people were offered support through a "housing first" program, which offered housing, along with support services. The Urban Institute study found that they remained housed and had fewer interactions with emergency services years later.

Strohm hopes that the report prompts the public to ask more questions, while Brown hopes the study would lead to more transparency.

“I think our expectation or our hope would be that given this substantial increase in dollars that are coming from the state, coming from local governments, that there is not only transparency overall in the system,” Brown said, “but transparency in how these incoming resources will help transform and move the needle on some of the outcomes that we highlighted that are going, frankly, in the moment the wrong direction.”

Editor's note: This story has been updated with comments from Colorado research groups and to reflect San Antonio's unsheltered population has decreased by 77% in the downtown area.

Colorado's think tanks on Friday sparred over a new report saying the cost of tackling homelessness in metro Denver is on track to cost $2 billion over three years, with critics calling the study unreliable, even intentionally misleading, and authors standing squarely behind their research, insisting it's transparent and accurate.