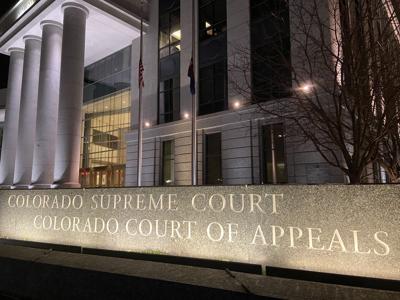 In the months following the disclosure that a high-ranking former employee of Colorado's Judicial Department allegedly threated to reveal in a lawsuit years of hidden judicial misconduct, the Colorado Supreme Court threw up roadblock after roadblock — at times even refusing outright to hand over information — at the efforts to investigate the scandal by the body that disciplines judges.

In a back-and-forth series of letters with Chief Justice Brian Boatright last year, the Colorado Commission on Judicial Discipline repeatedly admonished the court for not being forthcoming with information it said it needed to determine whether a deeper investigation was necessary — a problem that seemingly still exists — according to copies of the correspondence obtained by The Denver Gazette via open-records requests.

Despite Boatright’s public assurances of transparency and cooperation with inquiries into the misconduct allegations, the letters portray a broader showdown between two constitutionally created entities, each pressing for control of what it deems to be its mandate.

At issue is the commission’s charge to investigate any form of judicial misconduct, no matter whether the Judicial Department had already deemed it to be inconsequential, and the Supreme Court’s view that judges need only report the misbehavior of a colleague if they witnessed it firsthand.

Much of the commission’s annoyance appears rooted in concerns it was learning the details of the scandal through press reports and not from the judiciary itself. As each new allegation surfaced, the commission requested information from the court that corroborated or refuted what it was reading, according to the letters.

Rather than answer, Boatright — and by extension the Judicial Department — appeared to dawdle, asking the commission for more specifics or that it provide a “better understanding” of what it wanted.

For its part, the commission said it merely needed the court to report what it knew.

“Our preference … is to hear directly from your office and the Judicial Department about their knowledge and views on these topics rather than await press reports,” then-commission Chairman Christopher Gregory wrote Boatright on May 18, 2021. “We ask you again to please convert your assurances of disclosure and cooperation into concrete action.”

Gregory became the commission’s executive director in January after Gov. Jared Polis chose not to re-appoint him last year as a commission member.

The struggle peaked in January 2022 when the commission, in a highly unusual public airing of its frustration with the Supreme Court, told legislators it not only wasn’t getting the kind of unfettered access to information Boatright said other investigators had, but that the high court had attempted to manipulate how the commission did its work.

The court controls the commission’s funding through the Office of Attorney Regulation Counsel and for months has not approved the additional dollars the commission needs to pay for a law firm it hired to help it investigate the scandal.

As a result, lawmakers are contemplating the creation of a new Office of Judicial Discipline that would be a more independent body that isn’t beholden to the Supreme Court’s purse strings.

The Gazette received 13 pages of correspondence that occurred last year between the commission and the Supreme Court through an open-records request to the Judicial Department — and was required to pay $460 for them. About half of the pages were blacked out. The department said the redactions were to protect information it said the law allowed to be kept secret.

The information that was released indicates at least two other letters between the bodies were withheld entirely, one of them from Boatright and the other from State Court Administrator Steve Vasconcellos.

The department refused a request from The Gazette for it to generally describe what was redacted or withheld, a provision that generally is allowed under Colorado Open Records Act, but which does not apply to the Judicial Department.

The Judicial Department has its own open-records policy — known as P.A.I.R.R.2 — that is similar in some ways to CORA. The commission is not covered by any open-records provision.

The unredacted portions of the letters provided to The Gazette, however, give a picture of two entities at odds with how they are treating the scandal and the court’s reticence to be candid.

Neither body would comment to The Gazette about the correspondence.

The commission is made up of 10 people: Two district court and two county court judges appointed by the Supreme Court; two lawyers with at least a decade practicing in Colorado, and four citizens who are not lawyers or have ever been a judge, appointed by the governor with the consent of the state Senate.

The dustup began in February 2021 when The Denver Post revealed former Judicial Department chief of staff Mindy Masias was allegedly given a $2.5 million contract — approved at the highest levels of the department — to prevent her from filing a tell-all sex-discrimination lawsuit. At the core was a two-page memo allegedly written by the department’s former human resources director, Eric Brown, that laid out all the department’s misdeeds Masias had seen over a 20-year career, including the actions of several high-ranking judges as well as its chief justice, all of it kept from public view.

The memo also outlined how the department had created a culture that fostered misogyny and harassment.

The department’s former court administrator — its highest civilian position — has insisted former Chief Justice Nathan “Ben” Coats approved the Masias deal after hearing some of the details contained in the memo during a private meeting in January 2019, then asking what could be done to prevent the information from becoming public.

The stories set off a firestorm of reaction. In a public statement, Boatright assured accountability.

“The people of Colorado deserve a judiciary that they know is being held accountable to the highest standards of professionalism and ethical behavior, regardless of title or position," he said in a Feb. 16, 2021, press release. "As Chief Justice, I am personally committed to restoring this public trust."

Additionally, Boatright had "directed that he be notified and receive weekly updates on all future misconduct complaints across the department to ensure each incident is fully investigated and acted on as appropriate without delay," according to the press release.

Within days, officials chosen by the governor, attorney general, and the leaders of both legislative houses were named to a panel that was to hire independent investigators to delve into the scandal.

Shortly after, the judicial discipline commission told Boatright it had concerns over how the investigation was being set up, particularly how it related to the commission’s work. Because it is to operate independently of the Supreme Court, the commission was concerned information culled by the independent investigators might not be shared with it.

“The Commission would like a better understanding of the investigating entity you are creating … (and) has some concerns that your April 26th letter suggests your office and the Judicial Department view the plan to create the new (investigative) entity as a substitute for the Commission’s role or as a basis for delaying the work of the Commission,” Gregory wrote on May 18. “The Commission disagrees with these views, if they are held.”

The department refused to give The Gazette the April 26th letter Boatright wrote to the commission.

Boatright responded to the commission on June 11, 2021, saying it seemed to misunderstand when a judge is required to report allegations of misconduct by another judge. They need only do so if they actually witnessed the event.

“Based on the tone and substance (of the commission’s letter), I’m concerned that the duty of individual judicial officers to report known violations of the Colorado Code of Judicial Conduct (to the commission) … has been misconstrued as encompassing the duty to report either unsubstantiated allegations of judicial misconduct leveled indirectly by a third-party long after the fact,” Boatright wrote on June 11, 2021.

“We need to start with the same basic understanding … because ‘knowledge’ … is limited to ‘actual knowledge,’” Boatright wrote.

Boatright added that “I of course recognize and take very seriously” the obligation “to report known violations” to the commission and would “promptly comply” when the court had “actual knowledge” of them.

The commission shot back that Boatright was wrong and doing little more than stalling.

“The Commission does not agree with the suggestion … that your office and the department are relieved of disclosure and cooperation obligations if information is outside the ‘actual knowledge’ of an individual judicial officer,” El Paso County District Judge David Prince, the vice chairman of the commission, wrote on July 23, 2021. “The Commission renews its prior requests to you for disclosure and active cooperation in the Commission’s fulfillment of its constitutional obligations.”

Prince added that Boatright’s responses are contrary to the chief justice’s public statements of cooperation and transparency.

The commission then subpoenaed the Judicial Department, and by extension the Supreme Court, in an unprecedented display of authority.

Days after it was revealed the commission had issued the subpoena, the 7-member Supreme Court jointly said in an internal department email that it had been cooperating with the disciplinary body all along, intimating allegations otherwise were inaccurate.

The commission publicly said it stood by its allegations.

The memo scandal has resulted in at least six separate investigations. The state auditor last month referred four people tied to the scandal for criminal investigation after completing its inquiry.

David is a Senior Investigative Reporter at The Gazette and has worked in Colorado for more than two decades. His work has been recognized by, among others, Investigative Reporters and Editors, the Society of Professional Journalists, the Scripps Howard Foundation, the Society of Business Editors and Writers, the National Association of Real Estate Editors, at the National Headliner Awards. He has worked at publications in New York City, St. Louis, Detroit and Denver over a journalism career that began in 1982.

Four former employees of the Colorado Supreme Court Administrator's Office have been referred to law enforcement for criminal investigation following a year-long audit into allegations of a contract-for-silence scheme and a whistleblower letter that alleged more widespread fraud, the Supreme Court announced Monday.