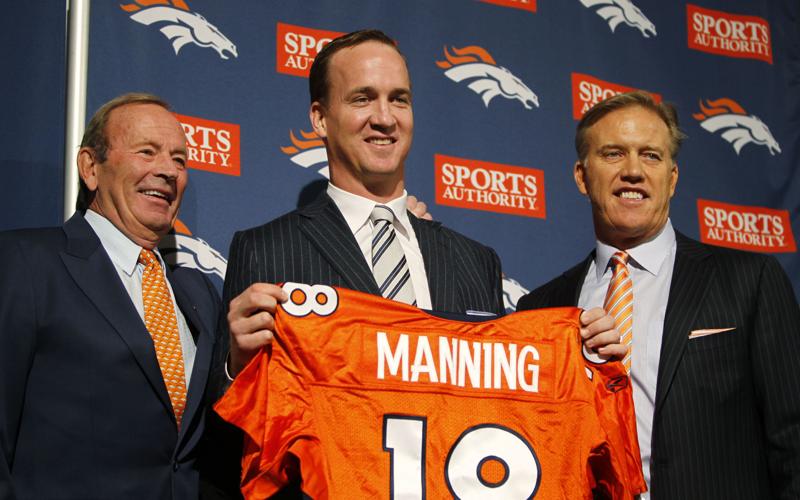 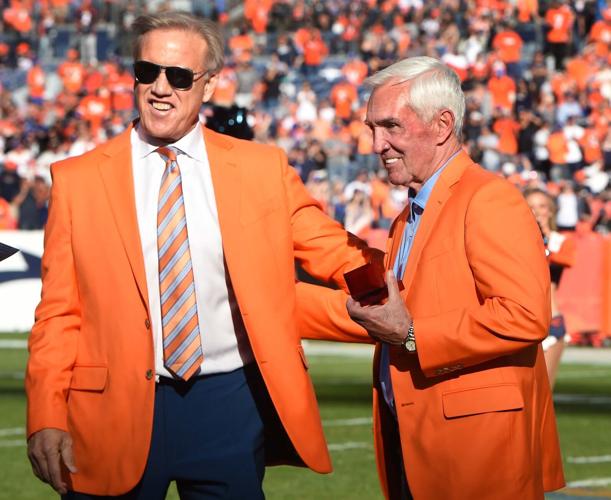 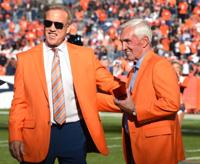 Many Broncos greats were in the house for Sunday’s game against the Raiders. Former Broncos Head Coach Mike Shanahan was added to the Ring of Fame. He was presented a commemorative ring by Broncos quarterback John Elway during a ceremony at halftime on Sunday, Oct. 17, 2021. Shanahan was the winningest coach in Bronco history and took them to two winning Superbowls. The Broncos were defeated 34-24. (Photo by Jerilee Bennett, The Gazette)

Many Broncos greats were in the house for Sunday’s game against the Raiders. Former Broncos Head Coach Mike Shanahan was added to the Ring of Fame. He was presented a commemorative ring by Broncos quarterback John Elway during a ceremony at halftime on Sunday, Oct. 17, 2021. Shanahan was the winningest coach in Bronco history and took them to two winning Superbowls. The Broncos were defeated 34-24. (Photo by Jerilee Bennett, The Gazette)

The franchise’s fabulous four have resumes with an aggregate NFL total of 24 — count ‘em — 24 Super Bowls.

In his 27 seasons with the Broncos Elway was a quarterback in five championship games and an executive in two more. The Duke of Denver won three Super Bowl rings and was directly involved in 32 postseason games.

Manning was a quarterback in the NFL for the Colts and the Broncos for 17 seasons and played in four Super Bowls, winning two, and 27 postseason games.

Kubiak was a backup quarterback, assistant coach, senior personnel advisor and head coach with the Broncos for 20 seasons. He also was the Texans coach for eight seasons and coached with the 49ers, the Ravens and the Vikings for four years. Kubiak was on the sideline for seven Super Bowls — and won four championship rings.

Shanahan was a Broncos assistant and head coach for 21 seasons and was a head coach with the Raiders and in Washington for six seasons. He was a coach with six Super Bowl teams. He won one Super Bowl as an offensive coordinator with the 49ers and two as the Broncos’ coach.

They knew what they were doing.

All four have or had their primary homes in Denver.

The quartet was at Mile High for the last game here two weeks ago when the Broncos embarrassingly were beaten by the Jets.

Elway and Manning often attend Broncos practices and home games. Elway is an advisor to the Broncos and has an office at Dove Valley. Kubiak’s son Klint Kubiak is the Broncos’ quarterbacks coach-passing game coordinator, so Gary certainly keeps up with the Broncos and constantly is in communication with Klint. And Shanahan is an unofficial advisor to son Kyle Shanahan, the 49ers coach. Mike also was in attendance for the Bronco’ 11-10 victory over the 49ers.

So, they are quite familiar with the current Broncos and Nathaniel Hackett.

Hackett, of course, thinks he is the smartest man in the room and at the stadium. He has been a quality control coach, a quarterbacks coach, an offensive coordinator and now a head coach for 14 seasons. But the only time Hackett ever reached a Super Bowl was as a 5-year-old guest of his father Paul Hackett, an assistant coach for the 49ers’ championship team in 1984.

According to analysts, Hackett and his Broncos have a less than 1 percent chance of being at the Super Bowl this season — unless the coach buys a ticket.

The Broncos always will have London; they may have Paris, too.

In the trade of edge rusher Bradley Chubb Tuesday, general manager George Paton acquired a Dolphins’ first-round pick in 2023 that originally was possessed by the 49ers. The Broncos obviously need another offensive tackle, particularly after they didn’t draft one in 2021.

An excellent choice, if he lasts that long, would be Ohio State tackle/guard Paris Johnson Jr. His only negative is he majors in journalism. If the Broncos can draft him, they may not always have Paris, but they would for at least four or five years.

For the moment, Paton remains confident. “We have a top five defense. We feel like the offense is trending in the right direction. We believe in our coaching staff; we believe in our players, and we feel like we can make a push in the second half,” he said the past week.

The push must be to a 6-5 record, with victories over the Titans, the Raiders and the Panthers. The Broncos have gotten to the midway with a mark duplicate to three of the past five years — 3-5. They were 4-4 and 2-6 in the other two seasons of this abysmal downspin from relevancy.

What does he do to win four straight after losing four consecutive games?

The solution is to ask Elway, Manning, Kubiak and Shanahan this week to fully assess the Broncos, offer offensive recommendations, address the coaches and the players and sit down specifically with Hackett, then Russell Wilson. The Broncos need their wealth of football knowledge and experience.

They are the four horsemen. They rode, Broncos Country — and can again.

Who will win the World Series in 2023? A very early prediction

Too soon to think about 2023 in the MLB? Never. Here's a way too early look at who might win it all next November.