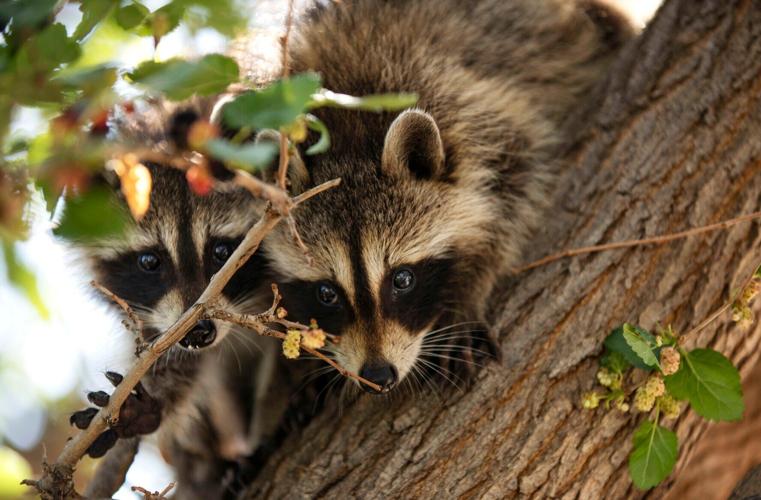 A pair of baby raccoons, called kits or cubs, hang out in a mulberry tree near downtown Colorado Springs last summer. According to Colorado Parks and Wildlife, mother raccoons give birth to a single litter of usually three to four after a gestation period of about nine weeks. 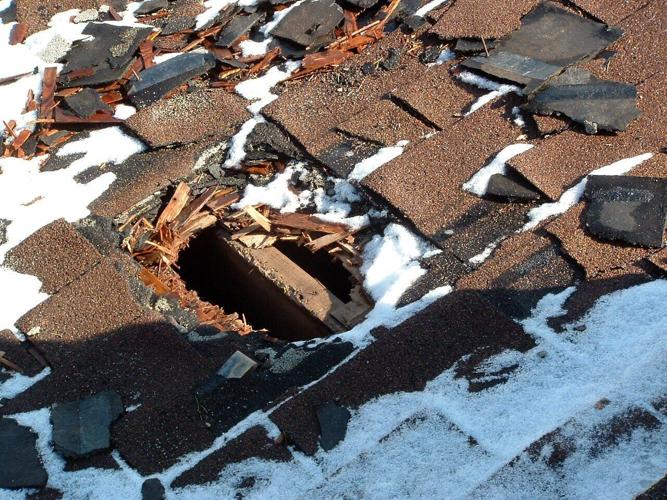 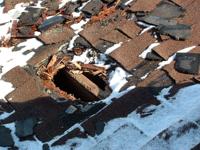 Raccoons, which are members of the bear family, are muscular and powerful enough to bust holes through roofs. Courtesy Gerrod Walker 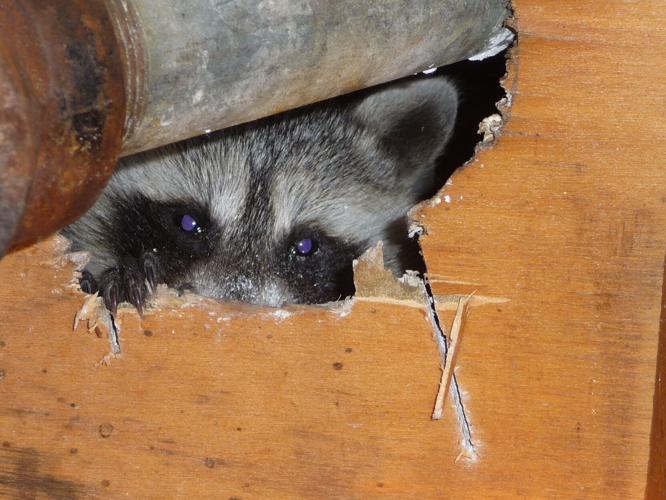 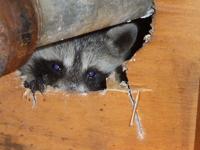 Raccoons like to build dens underneath decks and sheds, and in attics and tree cavities. Courtesy Gerrod Walker 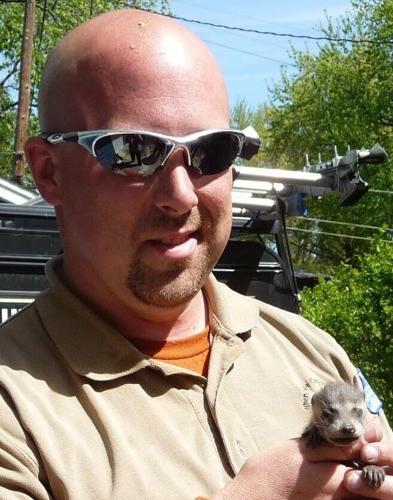 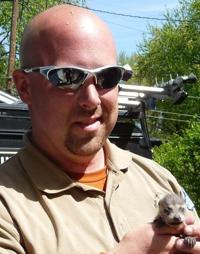 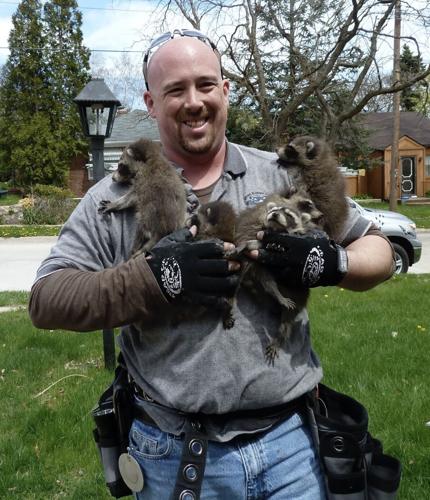 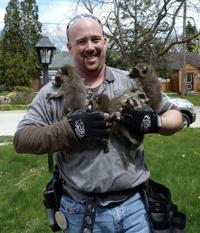 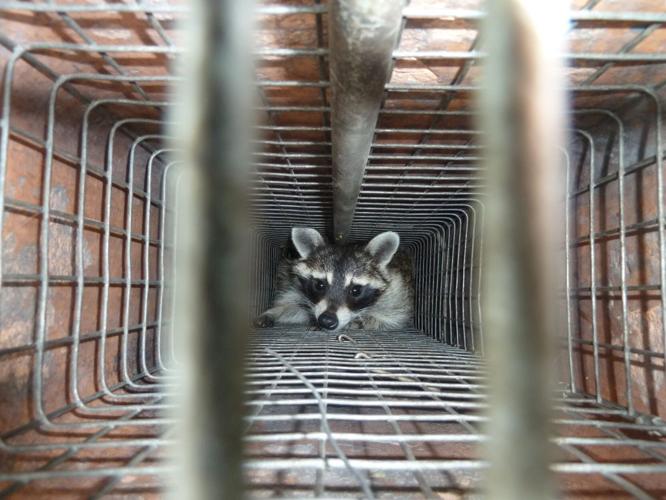 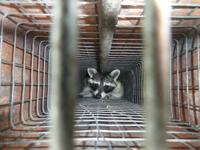 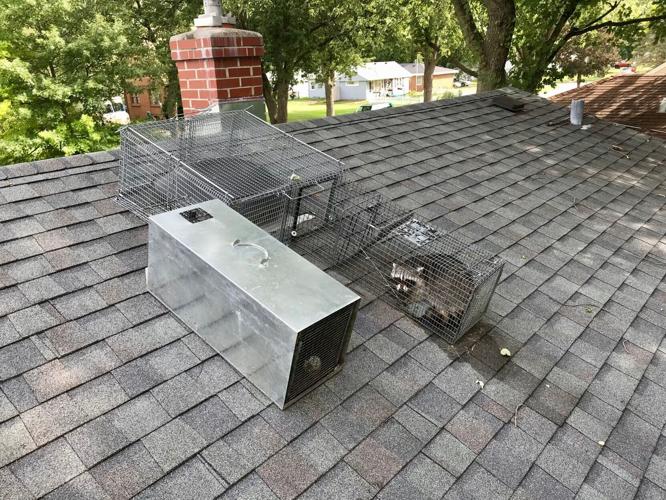 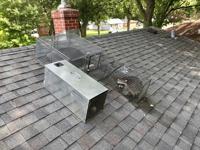 Raccoons. I have loved and loathed a few.

Every summer they manifest out of the darkness in my backyard. Quietly snuffling around in their search for remnants of bird seed, they rehydrate at my birdbath, and wash their muscular hands by adorably patting the water. Whenever the stone bath is lying on its side in the morning, I know I’ve had a merry band of the members of the bear family.

My 13-pound dog knows they’ve descended upon us before I do, alerting me with ferocious barking as his front paws perch on the windowsill. I shine my flashlight through the window screen, they look up with their glittering eyes, wave hello and carry on with their ablutions. So precious with their costume masks, yet so destructive. Smart, yet intimidating.

Perhaps it was my grandfather who instilled in me a love for the critters. A raccoon whisperer, he charmed and fed the nocturnal animals who lived in the woods near his isolated house in Ridgefield, Conn. I vaguely remember sitting on the deck in the twilight as a little girl, while tame baby raccoons crawled up onto my belly and chest and let me pet their soft fur.

But where there are raccoons, there will be drama. Like last summer, when a scared adolescent’s curious snout landed her at the bottom of my trash can, where she stayed trapped for much of the night. I tipped over the can and set her free, after briefly entertaining a daydream of training her to use a litter box and spending nights cuddling on the couch.

And then there was the night two Novembers ago when I was fooled into believing I’d shooed off all the creatures, and let the aforementioned tiny dog out to do his tiny business. He morphed into Raccoon Warrior, a new superhero, and attempted to destroy his nemesis.

The nice vet told me the next day my little guy was no worse for the wear, and that his terrier and chihuahua self did exactly what he’d been bred to do — eliminate vermin. Nowadays I shine my big, powerful flashlight into the nooks and crannies of the yard and trees before we go out.

I admit, I’m partly at fault here. I haven’t always acted responsibly in regards to wildlife. I’m guilty of leaving old cookies, stale crackers, apple cores and assorted detritus out for picky squirrels, who turn up their noses and leave them for the raccoons, who don’t have such a discerning palate. Please forgive me. I was ensorcelled by their cuteness.

But those days are done. I am now older, wiser and angry at them for beating up my dog and also bullying me. I almost got into my own fisticuffs with a backyard gangster last summer over a forgotten suet cake hung for the birds. We O.K. Corral’d until I realized he wasn’t giving up his full-fat appetizer, and I decided it wasn’t worth it. He could have it. And that’s when I realized it seemed to be getting harder to scare them off. They’d deemed themselves rulers of my backyard, and I was vexed.

Gerrod Walker, owner and founder of When Nature Calls Pest Control in Florissant, doesn’t think a raccoon would attack a human unless cornered, or you got between a mama and her kits. But he does think I’ve lost the battle for my yard. And all due to my love of the birdies.

“A lot of people put bird seed out,” Walker said. “If there’s food and they’re looking for housing, the opportunity is there to move in. People feed feral cats, and I guarantee cats are not the only thing finding that food.”

In fact, I was probably well on my way to providing a nice co-op for said raccoons in my shed, where the rotting roof had given way to a perfectly sized hole they could squeeze through. Not only did they get in and gobble the bird food, but they worked off their meal by picking up my stuff and throwing it around willy-nilly.

I got off easy, though. Plenty of homeowners find themselves with new uncouth and unwelcome tenants.

“It’s easy to tell when you have raccoons,” Walker said. “It sounds like someone’s walking on the roof.”

The rascals don’t live in the gutters, as I once thought. They only use the underground portals to move around and hide. They’d really much rather set up camp in your cozy, warm human-made structure, including underneath sheds and decks and in attics. They also love a tree cavity.

If you’re not in the market for a new roommate, take stock of your roof situation. The powerful little things never met a weak roof vent or soffit — the material that connects the underside of your roof to the side of the building — they couldn’t bust through if they sensed a home sweet home on the other side. Fortify those two spots — put on a vent guard and reinforce the soffit. And check your attic fan, another popular point of entry.

Don’t allow them to establish themselves. People will sometimes allow raccoons to stay if they’ve set up shop and had babies, thinking they’ll leave when the young can live on their own, but that can set you up for future issues.

“Clients say I’ve lived here 30 years and never had problems and now I have problems every year,” Walker said. “They’re leaving pheromones behind. The longer you allow squirrels, racoons or mice to live there and mark that territory, you’ll have more problems down the road.”

It’s especially challenging when a lady raccoon has selected your humble abode as a safe space to give birth. Male and female raccoons don’t stay in touch after they breed, and dads don’t help with the young. The pregnant mama actually wants to relocate far from baby daddy and the breeding site, because if that male gets randy again, and there are babies in the way, he’ll kill them without a second thought. It happens a lot, Walker said.

Females scope out their new dens before they give birth, and head there when they’re ready. But if she senses danger from a male, she’ll move her young from one spot to another. It’s all very “Sleeping With the Enemy: The Raccoon Version.”

There is, however, a way to get a female to move her young without trapping and relocating them, or the other option — euthanasia, which makes me too sad to think about.

“You put the fluid from a male’s gland on a cotton ball or smear it on surfaces around the entry point,” Walker said, “and if she has an alternate denning opportunity, she is likely to move the young because she smells the presence of that male.”

Typically, there are about three to four babies in a litter, and the young males will separate from their mothers around 2 months of age and go off on their own. Females will stay with mom and learn to forage. Female raccoons usually have one litter per year, mostly around May and some in August, but if they lose that litter early enough, their bodies can go into estrus again, a period of sexual receptivity and fertility.

For those worried about rabies, Walker doesn’t see that much. The vet I saw after my dog’s tussle concurred. But Walker will sometimes see raccoons with parvovirus and distemper, which causes crustiness in their eyes and makes them stumble and unable to walk straight. That’s when the animal needs to be euthanized. He suggests calling someone like him or the city’s animal control.

Certainly, raccoons have their shadow side — don’t we all? But there also is plenty to admire. I will never not think they’re the epitome of adorableness, especially when mom comes traipsing through with her kits every summer, and I watch them play like puppies and act out their sibling rivalry dramas.

Walker can find the love, too. Not only are they great moms who protect their young, they’re one of the few animals who are problem solvers.

“If they can’t fix something by doing it one way, you’ll see them do it a different way the next time,” Walker said.

“They can adapt and overcome. That’s part of the reason they’re so pervasive.”

They come at night, as invaders do. Flying in a very ungraceful way, a menacing way, like miniature kamikazes. Their bodies are like furry bullets, their gray and vomit- green wings like something from hell.