Weekend things to do around Denver and beyond: Blues, Brews & BBQ, Paddlefest and more 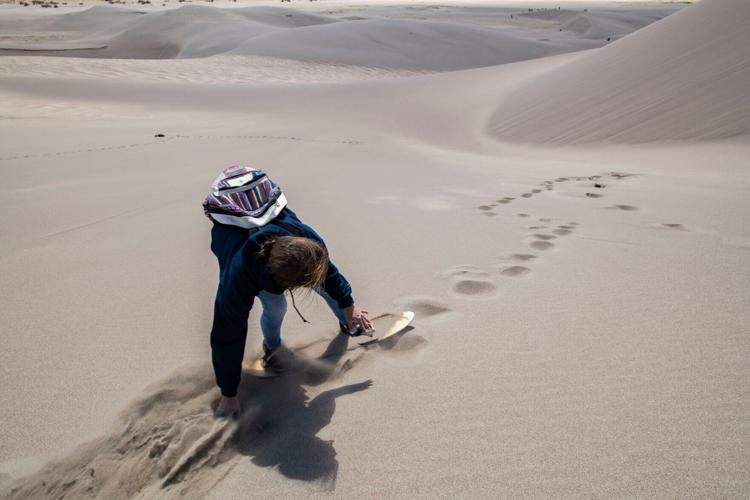 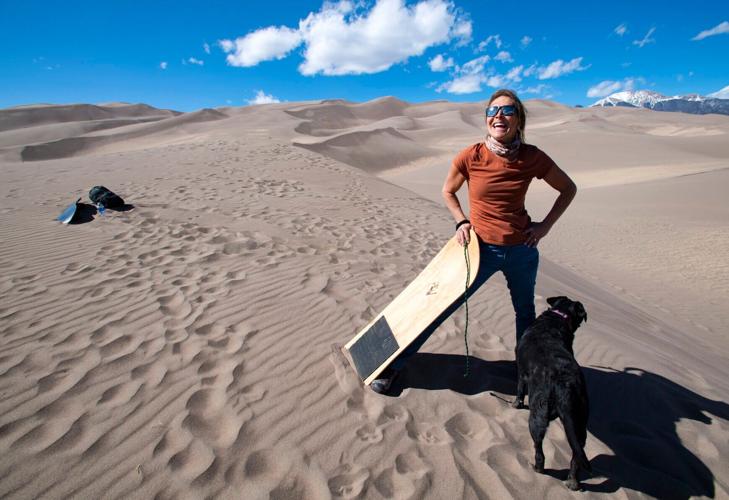 Amy Raney, the owner of SpinDrift SandBoard Rentals in Blanca, is all smiles after climbing the dunes for another ride on her sandboard with her dog Bella Wednesday, April 7, 2021, at the Great Sand Dunes National Park & Preserve outside Mosca, Colo. (The Gazette, Christian Murdock)

The sport of sandboarding is booming at Colorado's legendary dunes. Here we see enthusiasts of the sport at Great Sand Dunes National Park and Preserve, near Alamosa County, Colorado. (Video: Seth Boster/The Gazette)

MOSCA — About five years ago, Amy Raney came home from her 9-to-5 in Albuquerque and asked her husband a question.

"Do you ever feel like you're not living the life you're supposed to live?"

In a matter of months, the house in the city was sold and the couple moved into a tiny home in the next state over, an off-the-grid abode along a mesa overlooking the San Luis Valley.

Raney knew the southern Colorado valley as a place of "energy" and "mysticism." The mountains, streams, hot springs, dark skies and curiosities ranging from an alligator park to a UFO campground represented a colorful range of possibilities. But for work, Raney wasn't sure what the future held.

"Never in my wildest dreams," Raney says. "I guess the universe had other ideas!"

Here she is now, in all of her exuberance at a little shop in little Blanca, just east of Great Sand Dunes National Park and Preserve. Raney rents specialized boards and sleds for unforgettable summer afternoons — for a one-of-a-kind experience gliding down some of North America's biggest dunes, towering more than 740 feet in a field sprawling 30 square miles.

One might opt to stay on foot through this legendary landscape sculpted by wind, water and deep time. Or one might opt to take the fast track down on one of those boards, 3/8-inch slabs of wood with a waxed-up formica laminate for optimum velocity.

"This is a unique thing that lends itself to a little bit more adventure," says Katherine Faz, chief of interpretation and visitor services at the park. "Waxing up your board, finding a spot to try it out, and then lugging it back up the hill. Doing that is exhilarating for visitors."

She's observed more doing it in recent years, in line with the park's increased visitation. The 602,613 tallied in 2021 was a record.

"They see images, they see videos," Faz says. "It's a unique thing in a unique place, so I think the more that people are coming, the more they are going to be trying it out."

Raney's business attests to the rising popularity. She says she's tracked a 125% growth in revenue over the past two years, largely thanks to populations from Colorado Springs and Pueblo driving by the shop on U.S. 160.

They pick out their board — six different types with different shapes and sizes and names like Kestrel, Sidewinder and Sand Storm — and Raney gives them a brief rundown. She provides tips.

Look for the darker sand, the less mineral-packed that's more rideable, she says. Any snowboarding or surfing experience? she asks. Surfers will feel the sand dispersing like water, she says, while snowboarders' skills somewhat transfer. However, the key is to lean back rather than forward as in snowboarding — letting the board's backfin carve the sand. "Do your modified Warrior II," says Raney, a yoga instructor.

That's what Raney implores now at the dunes. She’s ventured to a windy ridge alongside a couple of goggled, masked, desert bandit-looking associates. "Send it, girl!" Raney shouts to D.J. Hendershot.

"It's one of those things you gotta tack onto the list in Colorado," Hendershot says at the bottom of the run. "Like, you can't not do it."

Plus, says companion David Rose: "The views are amazing."

The big sky above, the creek below, the surrounding forest and 14,000-foot peaks — the visuals are, indeed, one thing, says the man considered to be America's preeminent sandboarding pioneer. The Great Sand Dunes are one of 154 swooping fields around the world that Lon Beale has ridden.

One visit, "the top of the dunes were snow-capped," he recalls from his home in Southern California, "and there was enough spring runoff for the creek, so you could ride from snow, to sand, to water in one run. That was pretty interesting." 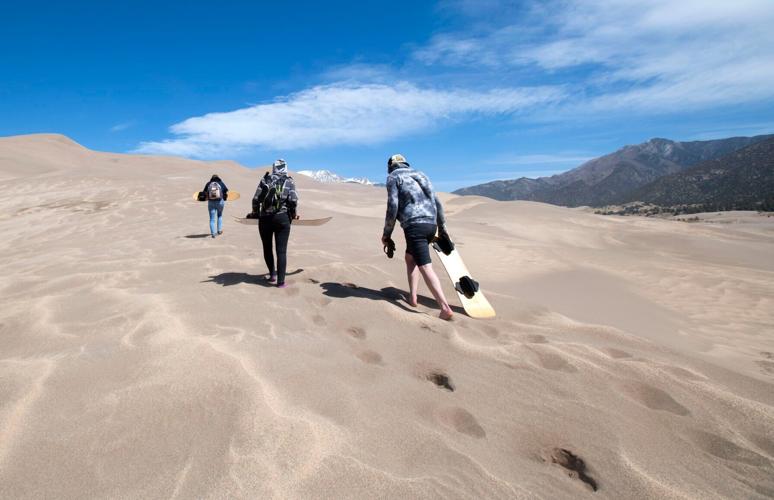 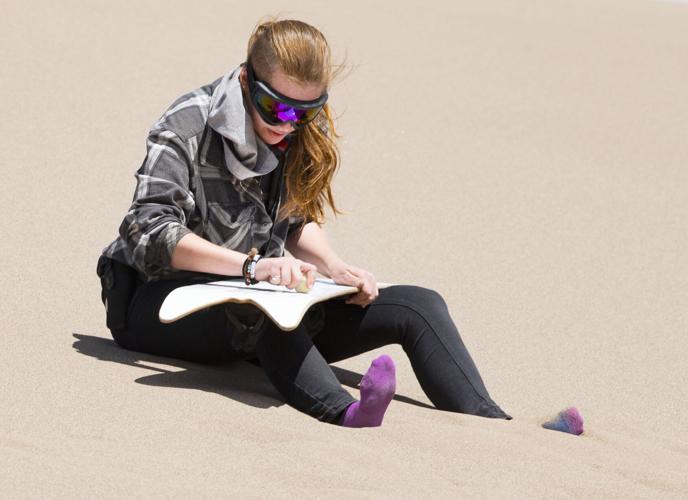 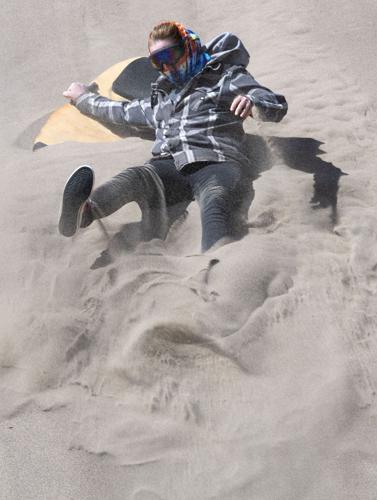 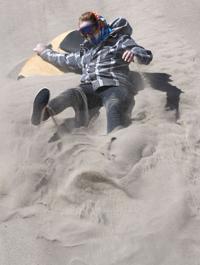 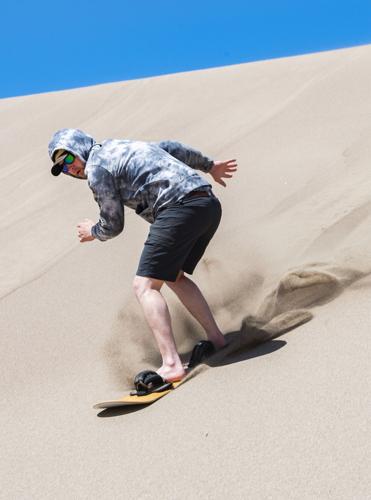 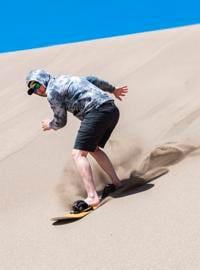 The sport of sandboarding is booming at Colorado's legendary dunes. Here we see enthusiasts of the sport at Great Sand Dunes National Park and Preserve, near Alamosa County, Colorado.

Beale calls the Great Sand Dunes the U.S.'s most popular venue for the sport. He counts his stomping grounds second: Oregon's Sand Master Park, said to be the world's only private parcel committed to sandboarding. He opened the park in 2000, almost a decade after garnering a reputation for inventing and widely distributing the first boards built for sand.

"It was kind of like, 'let's see if anybody has any interest in this,'" he says. "The boards were rented out within the first 30 minutes. So we brought more boards up, and same situation. They were just flying out of there. One hundred boards, and most days we rented them all out sometime before noon."

In the San Luis Valley today, Raney's is among stores renting Beale's boards. Beale hears the trend continuing: "Vendors are telling me, They're all gone, we need more boards," he says.

He credits the interest to America's historical fascination with board sports.

Atop stubborn sheets of cardboard and metal, Beale was more or less crawling down the dunes of California's Death Valley as a kid in the 1970s. That was between the dawns of surfing, skateboarding and snowboarding in this country. With a faster, more capable board, Beale predicted sand could be just as attractive, if not more.

He foresaw added bonuses: sandboarding as more accessible. With a soft surface much more forgiving than oceans and concrete, he foresaw a larger demographic (he’s seen as young as 2 and old as 84 at his park). As in snowboarding, there were no trees to navigate — and there also wasn't the cost of a lift ticket.

The boarding revolution turns on. Just look at longboarding and paddleboarding today, Beale says. In recent years, 25,000 annual visitors have been reported at Sand Master Park, some of whom are competitors practicing tricks similar to those seen by snowboarders.

"I imagine at some point, it isn't unrealistic to think it could end up in the Olympics," Beale says.

That would thrill Raney. For now, she's doing her part to bring exposure to the sport. She's flying a flag outside her shop in a drive-by town mostly void of commerce.

In an economically depressed valley, Raney sees sandboarding as a driver that could be marketed more — a recreation offering that no other Colorado locale can offer. Plus, Raney says, it's always worth returning for the bowls and contours that change with the dunes themselves season to season, according to Mother Nature's sculpting.

"Always changing and shifting,” Raney says. “Just like the rest of us in life.”

She's glad she made that change about five years ago, leaving the city to discover this sensation at the dunes.

Whatever that sensation is, she doesn't tell customers.

Rental options: Oasis Store close to the park's visitor center; SpinDrift in Blanca; or Kristi Mountain Sports in Alamosa. Rentals around $20 for the day. Vehicle entry to the park $25.

• Go early in the morning, avoiding afternoon heat and storms.

• For the long hike and risks on the highest dunes far out in the field, those are not recommended. Kids will enjoy small slopes from the parking lot, while teens and adults popularly hike the mile-plus to the first top ridge and hit lines along the way.

For a video of sandboarding at the Great Sand Dunes, go to gazette.com

At approximately 1:45 p.m., Sunday, Boulder County Communications was notified of a hiker who had injured their ankle on the Chautauqua Trail …