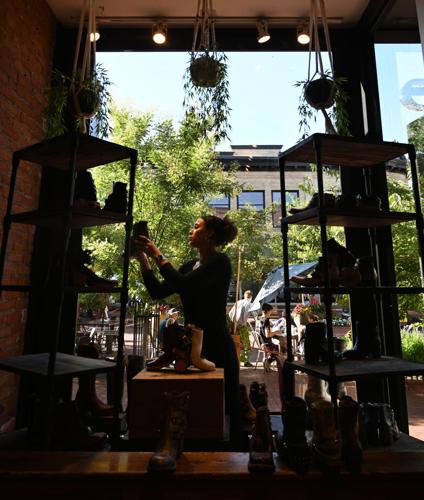 Freebird employee Leonora puts some boots in a window display in Boulder. 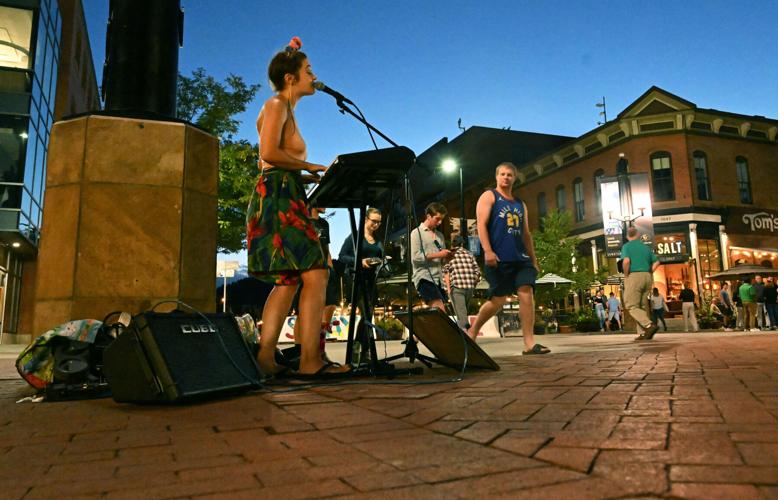 Marissa Zechinato entertains nighttime strollers along the Pearl Street Mall in Boulder. The city’s Pearl Street is a leafy, red-bricked row of frills, street performers and views of the Flatirons. 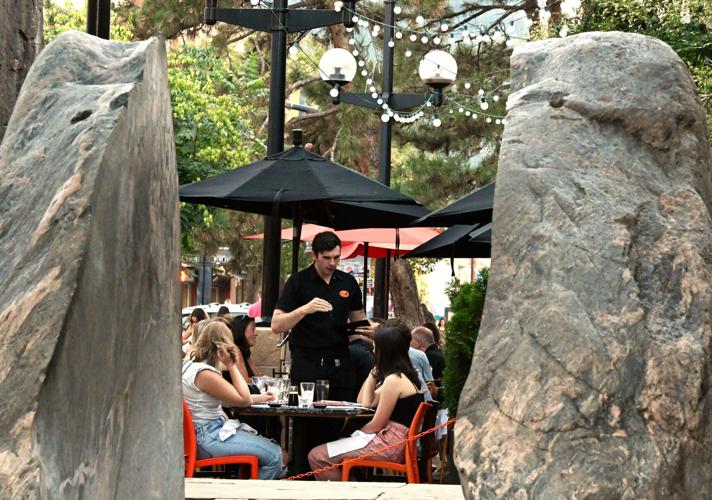 A giant boulder, cut in half, frames a table of diners along the Pearl Street Mall in Boulder on Wednesday, Aug. 13, 2022. 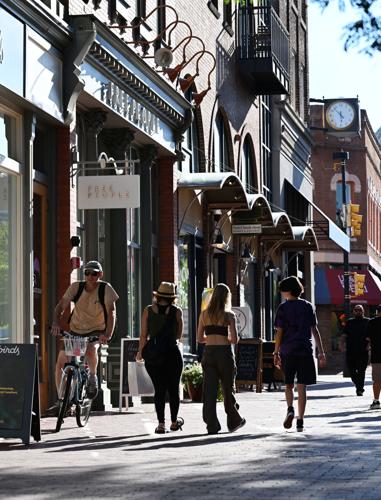 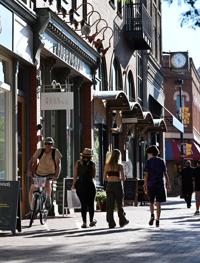 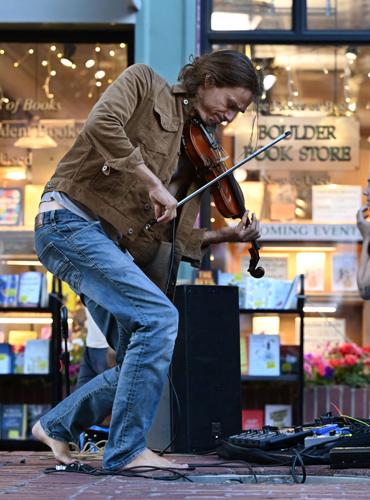 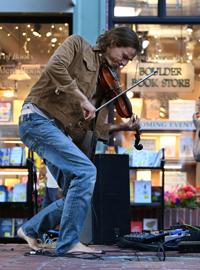 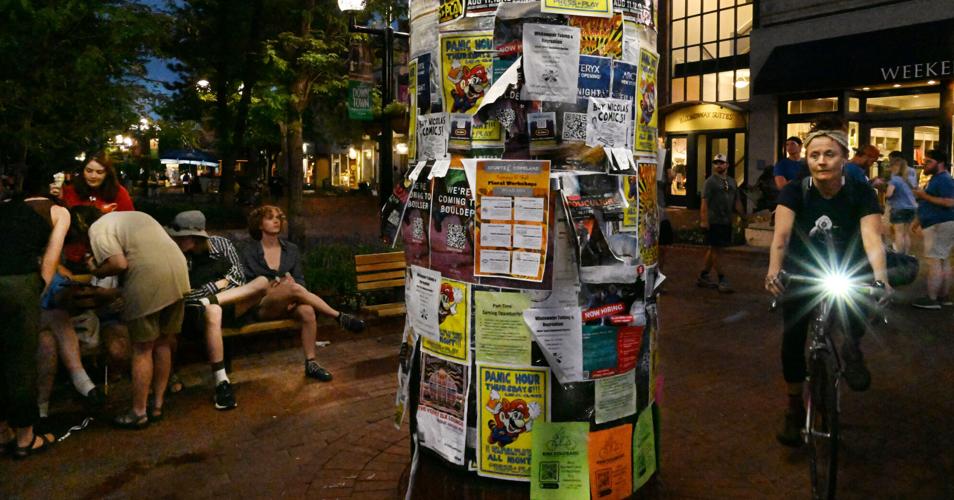 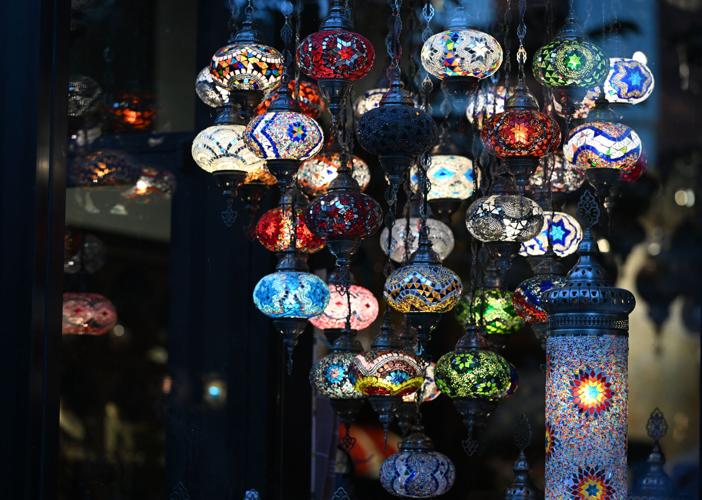 Even though most of the stores are closed at night, there’s still plenty of window shopping at the Pearl Street Mall in Boulder on Wednesday, Aug. 17, 2022. 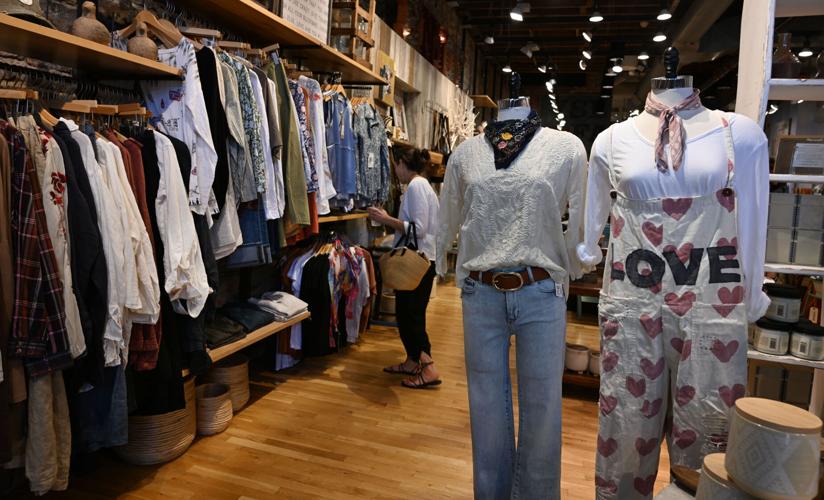 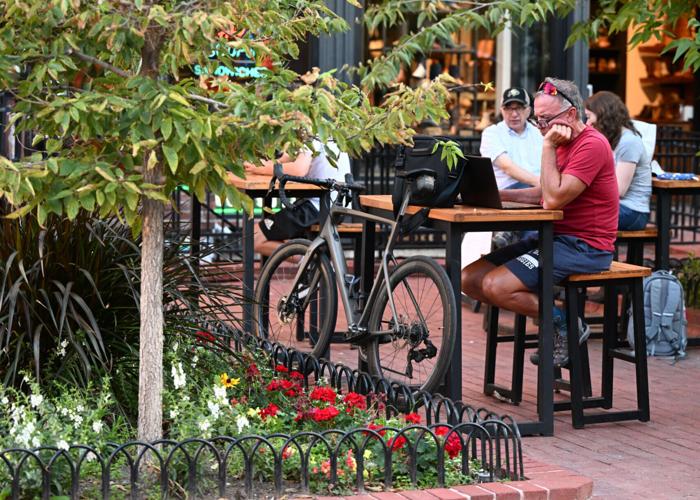 A man finds a perfect spot to take advantage of the free wifi on The Pearl Street Mall in Boulder on Wednesday, Aug. 17, 2022. (Photo by Jerilee Bennett, The Gazette) 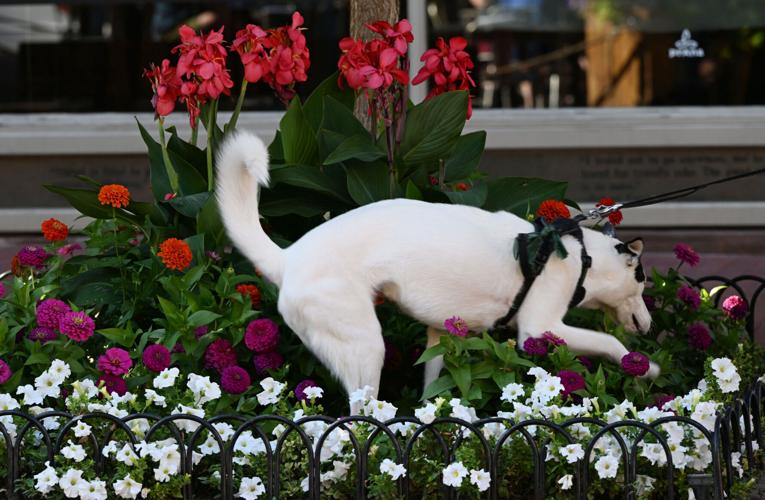 A dog wanders through on of the beautiful flower gardens on the Pearl Street Mall in Boulder and is quickly pulled out by his own on Wednesday, Aug. 17, 2022. (Photo by Jerilee Bennett, The Gazette) 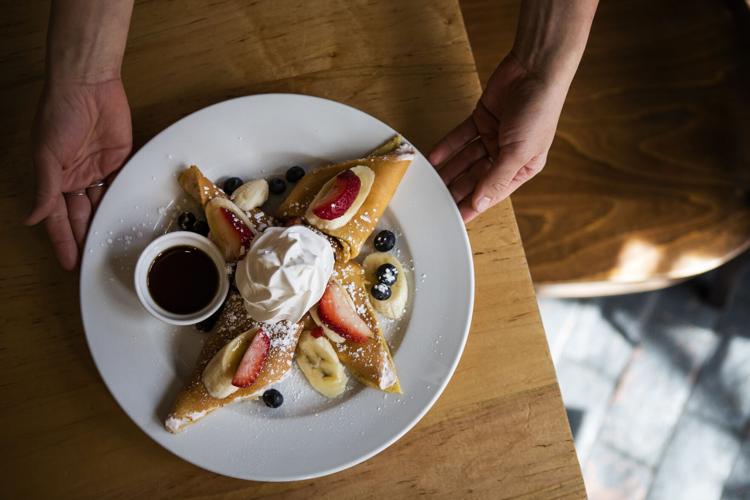 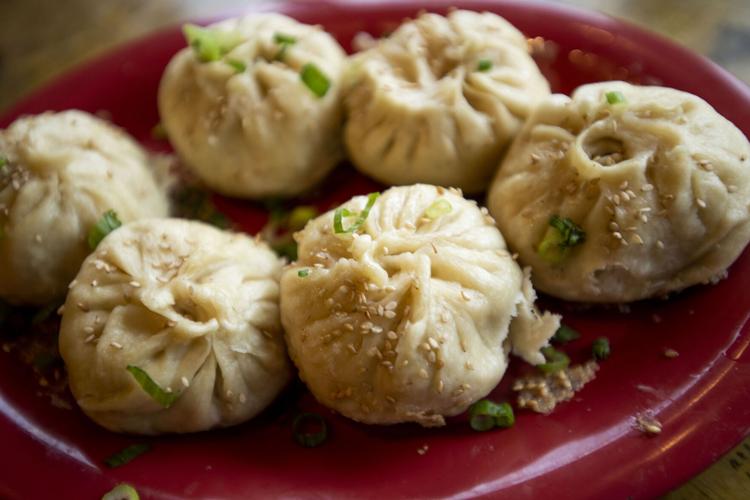 A selection of bao at Zoe Ma Ma in Boulder, which promises “super yummy street food” with its Chinese cuisine.

Freebird employee Leonora puts some boots in a window display in Boulder.

Even though most of the stores are closed at night, there’s still plenty of window shopping at the Pearl Street Mall in Boulder on Wednesday, Aug. 17, 2022.

A dog wanders through on of the beautiful flower gardens on the Pearl Street Mall in Boulder and is quickly pulled out by his own on Wednesday, Aug. 17, 2022. (Photo by Jerilee Bennett, The Gazette)

Anyone who has lived in Colorado long enough knows about Pearl Street. But no one knows the namesake — not exactly.

Pearl is thought to have been wife to one of the creators of the Boulder City Town Co. This was the company of 54 men who further developed the place that was hunting grounds for Arapaho tribes before outsiders settled it as a supply hub for miners.

The namesake is long forgotten now. Gone, too, are the deep ruts that formed in Pearl Street’s early days; wagons scarred the once-muddy thoroughfare. That was before a streetcar was built. Before pavement ahead of the 1920s automobile boom.

Then, in 1976, the road was closed to cars, and the pedestrian destination began. Pearl Street Mall was born.

And it’s funny to think now about the store owners who once covered their muddy fronts with wooden planks to entice customers. Funny to think about the local who, according to town history, observed 1940s Pearl Street as “a good place to buy a pair of socks.”

Today, Pearl Street is a place to buy much, much more — much more than the University of Colorado apparel. It’s a shopper’s paradise as much as it is a foodie’s playground. It’s a leafy, red-bricked row of frills, street performers and views of the Flatirons.

Whoever Pearl was, the street surely goes beyond her wildest imagination.

For 30-plus years, Weekends has carried the trendiest styles for men and women. Another locally owned staple is Savvy on Pearl, stocking clothes and shoes for all ages.

“Humble luxurious” is the goal at Island Farm. Haven is a boutique envisioned by mother and daughter, said to be “based on the philosophy that everything should be timeless and tastefully rebellious.” Jones + Co. Modern Mercantile bills itself a “thoughtfully curated mix of slow fashion, clean beauty and ethically made home goods.”

Prices got you down? Ramble on Pearl prides itself on discounted designer brands. Or browse deals at secondhand shop Apocalypse.

Peppercorn has long been beloved for fine kitchenware, decor and gourmet specialties. Into the Wind is named for its colorful array of kites. More unique, handcrafted gifts and souvenirs at Art Mart and Boulder Bazaar.

Find your next great read at the multitiered Boulder Book Store, a go-to since 1973. Trident is another bookstore that doubles as a coffee and wine bar.

The dreams of chefs collide in Boulder.

Take, for example, Eric Skokan, whose Black Cat bistro is the result of crops and animals raised at his farm. Or take Daniel Asher, whose elevated comfort food matches the cozy atmosphere of River and Woods. Or take Steven Redzikowski, whose humble, teenage beginnings at a New York pizzeria led him to Oak, named for the oven that is the cornerstone of a refined, New American menu.

Frasca is named for traditional gathering places in northeast Italy. The James Beard Award-winning concept gains inspiration from the region’s foods and wines. Izakaya AMU, meanwhile, is rooted in a Japanese tradition, where sake is best enjoyed with bites from the whole menu.

It’s not all fine dining along Pearl Street.

Foolish Craig’s has captured Boulder’s old hippie vibe for two decades while serving breakfast and lunch. Guy Fieri of “Diners, Drive-Ins and Dives” went for the BLT on house-made oatmeal stout bread and a slice of butter rum caramel cake, built with 21 layers of crepe. The menu boasts almost a dozen sweet and savory crepes.

For fast and affordable, Zoe Ma Ma is a mother-son creation serving authentic Chinese street food. The bowls and bao buns were also enjoyed by Fieri.

Long-standing Mountain Sun Pub and Brewery is central to the town’s craft beer scene — a casual spot for sandwiches and fries, too. Bohemian Biergarten is another fun, eclectic hangout for suds and grub just off Pearl Street.

For cocktails, License No. 1 is a speakeasy under the historic Hotel Boulderado. If you’d prefer a view with your drink, take to the rooftop at Avanti.

Boulder Theatre has a photo-worthy marquee and lineup filled with concerts and comedy acts. Other nightly acts at the Laughing Goat.

On summer weekends, you’re bound to catch musical or magical acts along Pearl Street. Also free: Kids will enjoy the splash pads and animal statues along the mall.

Press Play is a nighttime bar and arcade with old-school video games.

Main Street Colorado is a summer series spotlighting downtown stretches of mountain towns that altogether give the state its undeniable character.

BROOMFIELD • Maki Fairbanks finally got to sit down at her bakery, but now she rises to address a discrepancy in a cake order. Something about the icing. Not a big deal, the customer insists. But Fairbanks is ashamed, a cursed perfectionist.