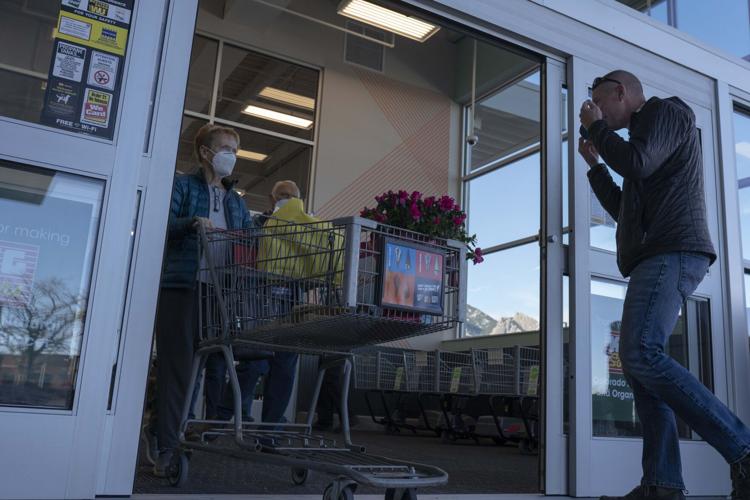 Table Mesa King Soopers customers make their way through an entrance on Feb. 9, 2022, in Boulder. For many, it was their first time being back at the local supermarket since the March 2021 mass shooting. 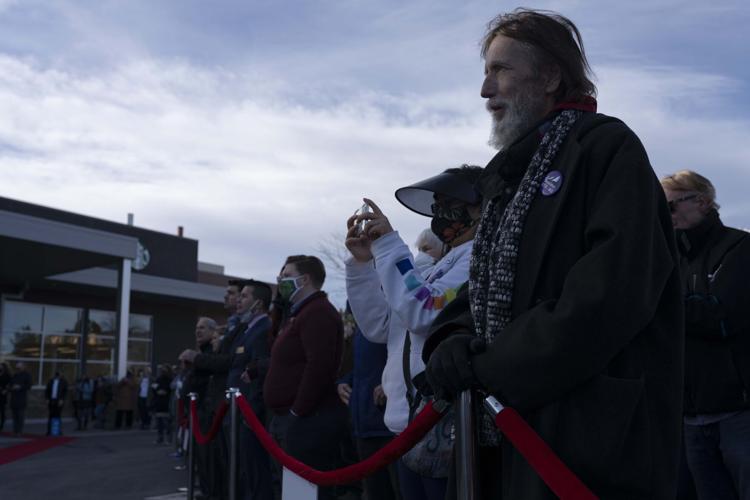 Boulder resident and Table Mesa King Soopers shopper David Prowell listens to a speech during a reopening ceremony on Wednesday, February 9, 2022, in Boulder, Colo. The Boulder supermarket is reopening nearly a year since a gunman killed 10 people while on a rampage through the grocery store and the parking lot. “I live just down the road from here,” said Prowell, “And I am just happy to be back.” (Armond Feffer/for The Denver Gazette) 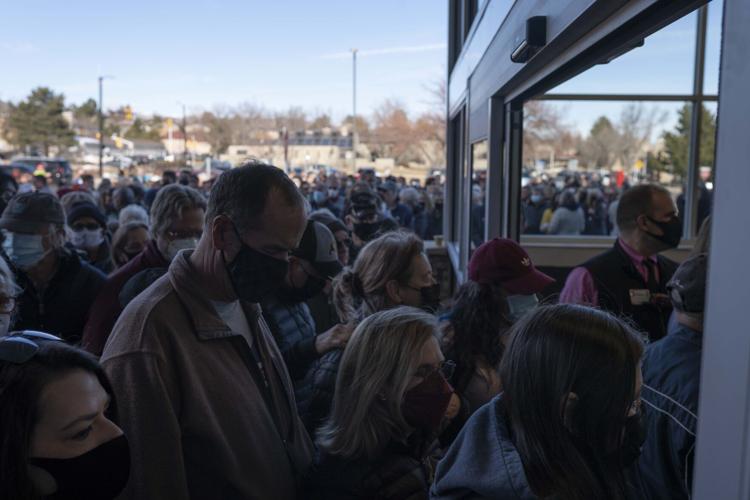 Customers stream into the Table Mesa King Soopers after its reopening on Wednesday, February 9, 2022, in Boulder, Colo. Hundreds of Boulder residents and people from all over the state convened in the parking lot of the grocery store to celebrate the reopening and the resilience of the city. (Armond Feffer/for The Denver Gazette) 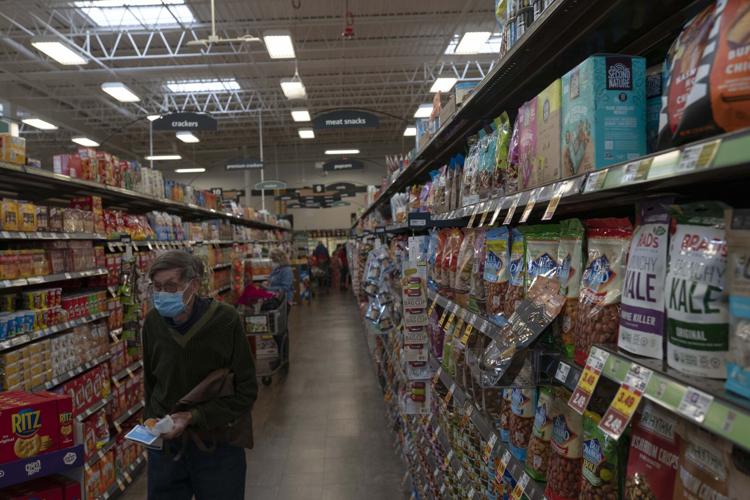 Shoppers go about their day inside the newly reopened King Soopers on Wednesday, February 9, 2022, in Boulder, Colo. The excitement and anticipation for the reopening of the Table Mesa supermarket was also met with tears for many customers as the memory of the tragedy that happened less than a year ago was still fresh. (Armond Feffer/for The Denver Gazette) 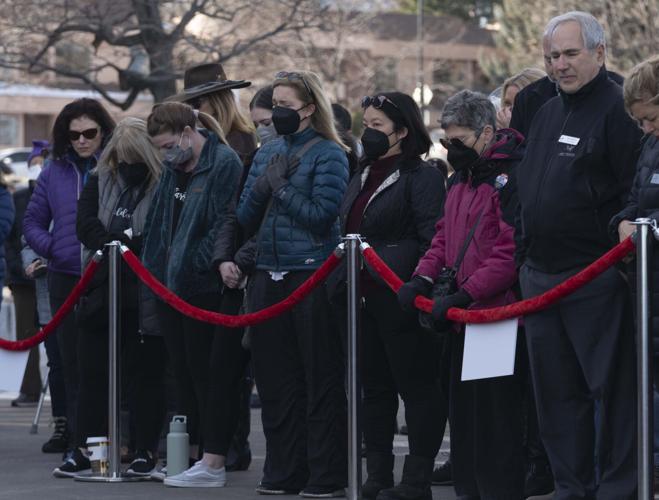 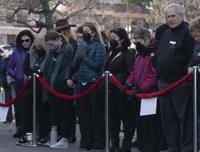 People bow their heads during a moment of silence for the ten victims killed in the Boulder King Soopers shooting on Wednesday, February 9, 2022, in Boulder, Colo. The crowd attending a reopening ceremony for the Table Mesa King Soopers expressed a mixed emotion of pride and sadness during the event. (Armond Feffer/for The Denver Gazette) 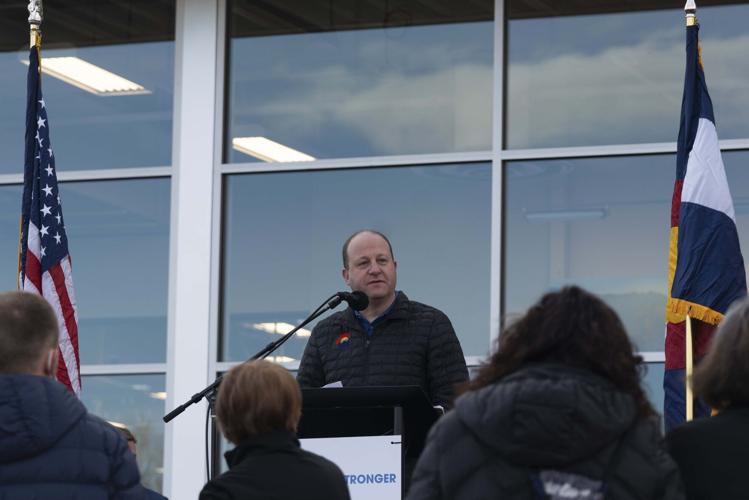 Colorado Gov. Jared Polis gives a speech to a crowd made up of King Soopers employees and Boulder residents on Wednesday, February 9, 2022, in Boulder, Colo. Gov. Polis had made his way to King Soopers on the day of the shooting that killed 10 people back in March of 2021. “The pain was so palpable,” Said Polis speaking on the moments after the shooting spree, “but so was the love from this city.” (Armond Feffer/for The Denver Gazette) 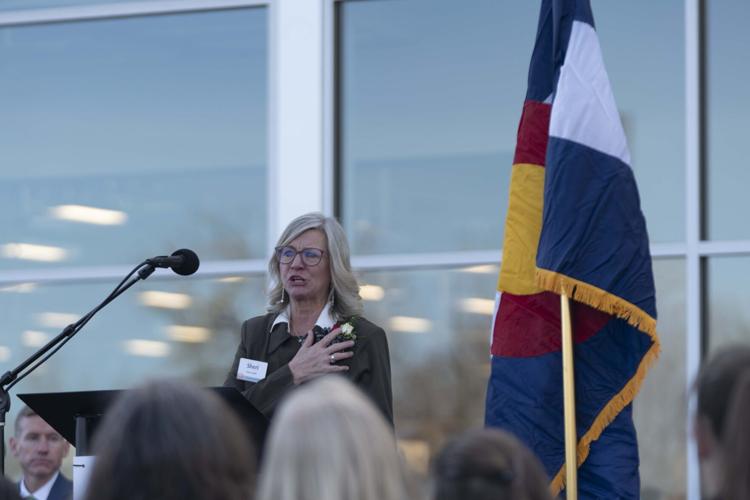 Table Mesa King Soopers store manager Sheri Bosman gives a tearful speech during a reopening ceremony on Wednesday, February 9, 2022, in Boulder, Colo. Bosman appealed for peace as she lauded her employees for the bravery they showed during and after the shooting on March 22, 2021. (Armond Feffer/for The Denver Gazette) 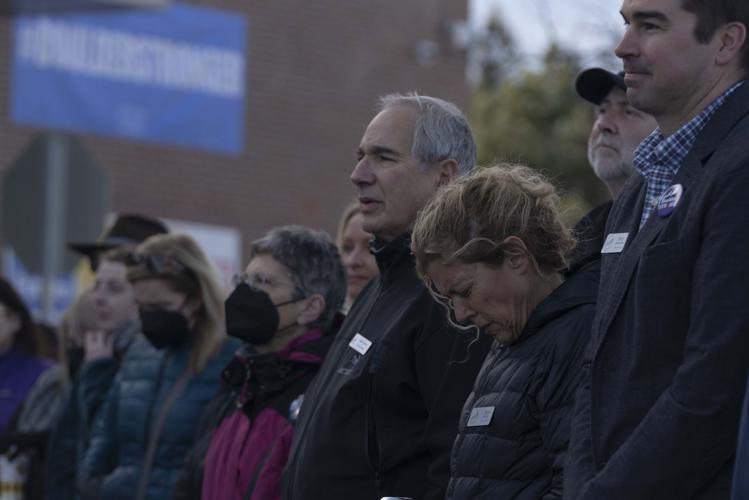 A crowd listens on during a speech by Gov. Jared Polis during a reopening ceremony for the Table Mesa King Soopers on Wednesday, February 9, 2022, in Boulder, Colo. A sign in the background reads “#Boulderstrong” which has become a rallying cry for the City of Boulder in the months after the shooting that took place in March of 2021. (Armond Feffer/for The Denver Gazette) 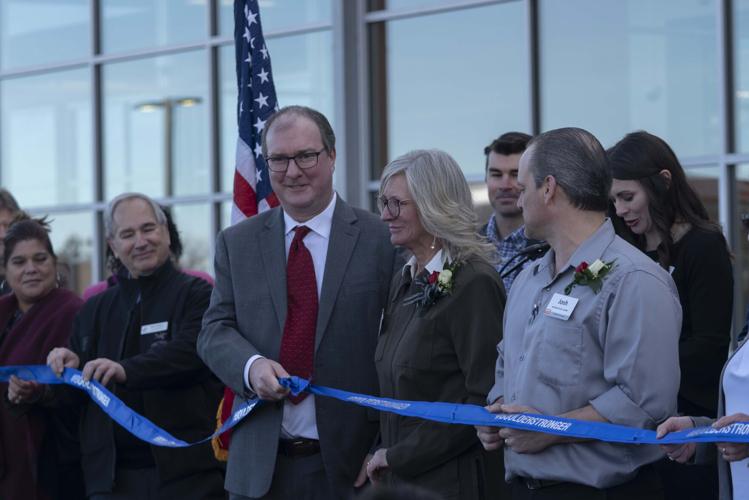 King Soopers executives and employees hold onto a ribbon during a reopening ceremony on Wednesday, February 9, 2022, in Boulder, Colo. The knotted ribbon was symbolic of the community coming together as opposed to a ribbon cutting. Kroger and King Soopers spokesperson Kelli McGannon said of the ribbon, “Like the strength of this knot, we are strong.” (Armond Feffer/for The Denver Gazette)

Table Mesa King Soopers customers make their way through an entrance on Feb. 9, 2022, in Boulder. For many, it was their first time being back at the local supermarket since the March 2021 mass shooting.

Table Mesa King Soopers store manager Sheri Bosman gives a tearful speech during a reopening ceremony on Wednesday, February 9, 2022, in Boulder, Colo. Bosman appealed for peace as she lauded her employees for the bravery they showed during and after the shooting on March 22, 2021. (Armond Feffer/for The Denver Gazette)

Weis, a south Boulder resident, has been shopping at the store for as long as he can remember, he said. On Wednesday, he went inside for the first time in 324 days but quickly left with only a carton of chocolate almond milk in hand.

"I'm here to honor the people who died and I wanted to show we don't succumb to fear in Boulder," Weis said.

Hundreds of people joined Weis on Wednesday morning at the store as it reopened for the first time since a mass shooting that took the lives of 10 people on March 22.

Cheerleaders from the Denver Broncos and Nuggets along with the University of Colorado Boulder's marching band escorted the store's employees to the front of the ceremony as the school's fight song echoed outside the store.

"Nearly a year ago, our lives were forever changed by a senseless act of violence, an unimaginable tragedy that left our hearts broken," said Kelli McGannon, regional director of corporate affairs for King Soopers. "The lives of Tralona Bartkowiak, Suzanne Fountain, Teri Leiker, Kevin Mahoney, Lynn Murray, Rikki Olds, Neven Stanisic, Denny Stong, Eric Talley and Jody Waters — they will forever (be) etched upon our hearts."

The crowd then went silent to pay its respects. Some people held one another, some recorded the moment, some cried and others were motionless.

South Boulder resident Gina Barajas was one of the crowd members who showed their emotions on Wednesday morning. She said she skipped shopping on Sunday — her normal grocery day — to reclaim the store she has shopped at for 16 years.

Lillas Morgan said she came to show her respect to those who died during the mass shooting and to be there for her community members.

Brockett, Boulder's mayor, said March 22 will forever be etched into Boulder's memories and hearts. He also said he hopes the store's reopening will continue to help people grieve and move forward together.

"It's my hope that we turn our anger and grief into courage and resolve to confront the difficult issues of our day," Brockett said. "I know that reentering the store will be a difficult thing for many to do who were impacted by the tragedy. But I encourage you to walk shoulder-to-shoulder with the many other community members, because we are here for you. This is our (store), our community. Let's reclaim it together."

The ceremony concluded in an untraditional manner. There was no ribbon cutting but instead two dark blue ribbons that read #BoulderStronger — one from the employees and one from the city — were tied together to signify "strength, unity and the unbreakable spirit of our associates and community," said Jessica Trowbridge, a King Soopers spokeswoman.

About 60 store employees then marched into work through a tunnel formed by the Broncos and Nuggets cheerleaders. Hundreds of shoppers and community members followed and were greeted with coffee, doughnuts, cookies and maps of the store's new layout. Officials said they designed the layout after the company gathered feedback from employees and members of the Boulder community.

Some shoppers told The Denver Gazette that they were relieved to return to their neighborhood grocery store and loved the new design. Barajas said she loved the amount of open space and noted it looks like a brand-new store.

"I'm in love with the store and how it looks," Barajas said. "It definitely wiped away the image of that day."

Barajas also said the emotions of the day were overwhelming. After she went inside and grabbed a few items, she decided to go home.

"I came home and cried," Barajas said. "It was just so emotional."

Boulder native and now Littleton resident David Link said he drove up for the store's reopening to honor his late father. They would go to the grocery store together in the 1960s and '70s and he felt the need to be there.

Link said he believes the redesign will help the community heal and come closer together.

"It's a model for healing in the face of tragedy," Link said. "So many people are here, coming together and embracing one another. It's just really great to see."

In addition to the changes to its exterior signs and interior, McGannon said a memorial garden will be planted on the west side of the store. Ten trees will be planted to honor each of the victims killed.

Of the many changes made at the store, the most impactful was the addition of "Table Mesa" on the store's exterior signs, former Boulder resident Ann Marie Jennings said.

She said it not only brings hope to the community but shows its resilience.

"What an awesome way to take back ownership and to take back our community space," Jennings said. "It's a beautiful honor for the victims and our entire community."

Nearly a year after the massacre at a King Soopers in Boulder killed 10 people and smashed the city's collective sense of safety, the newly re…