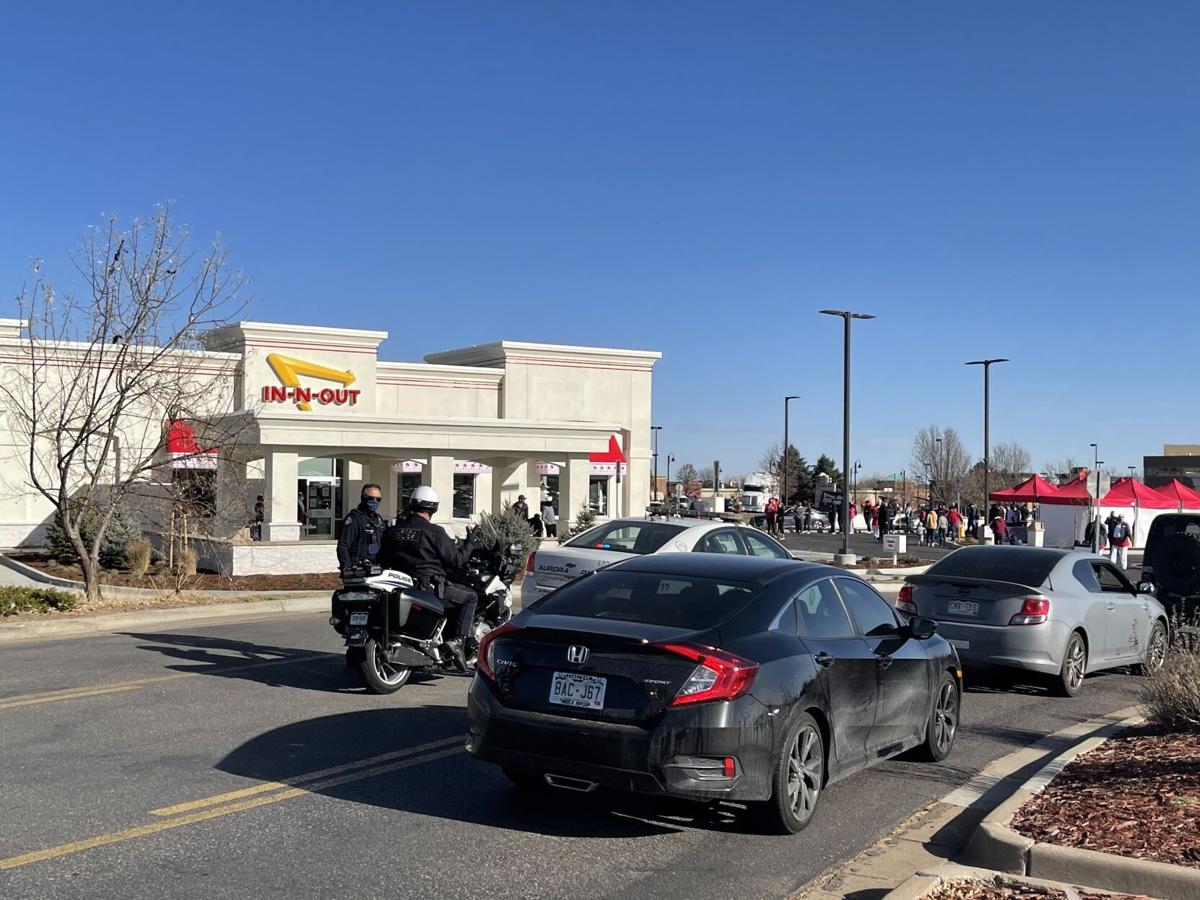 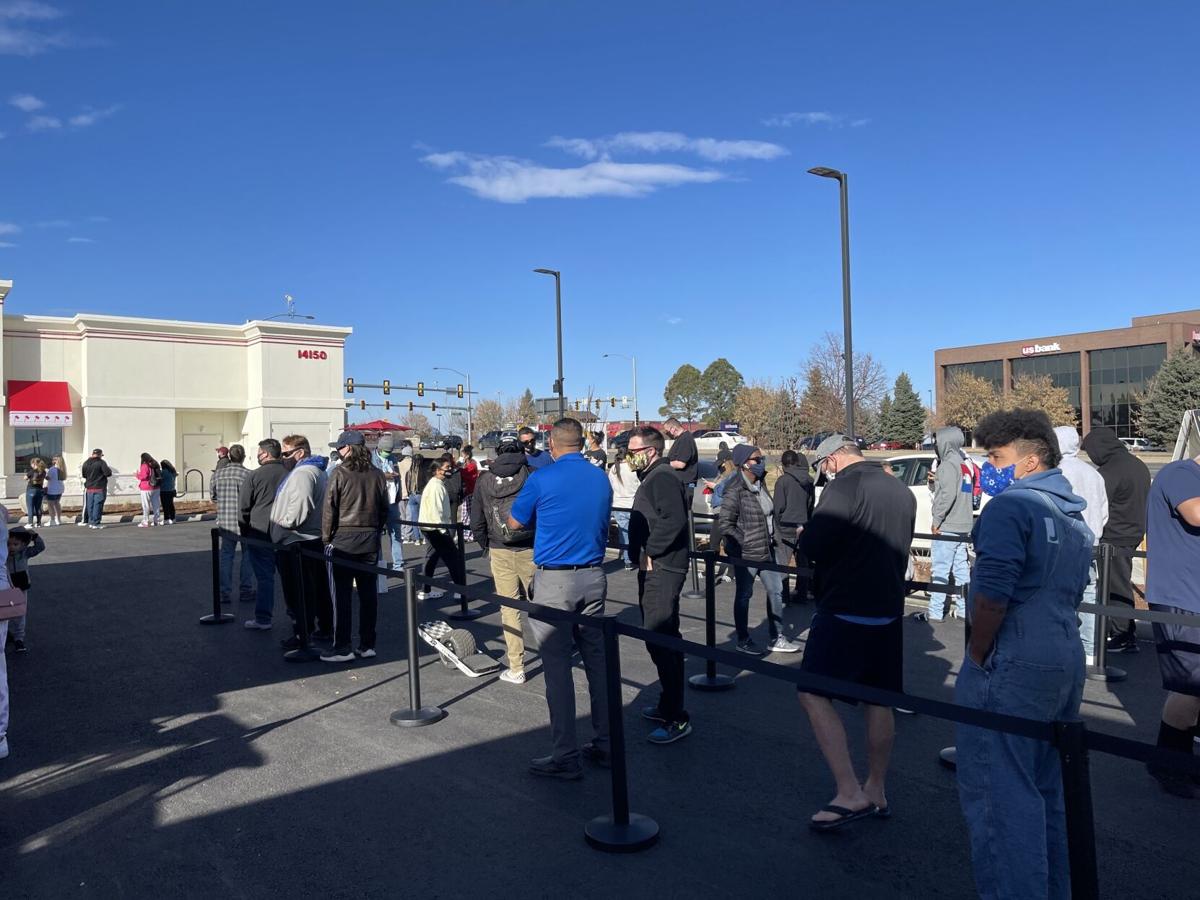 Hundreds of people waiting to order in-person inside the newest In-N-Out location in Aurora Friday morning. 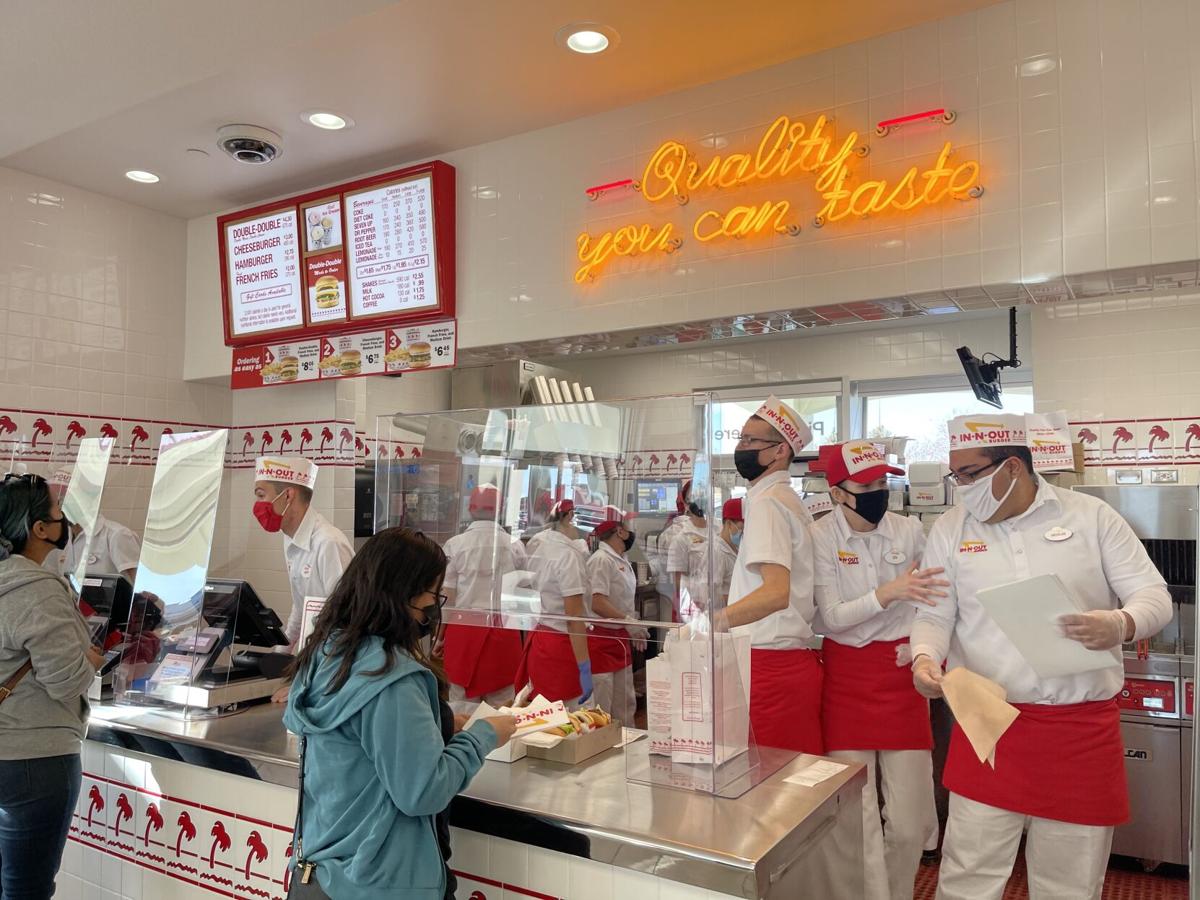 Hundreds of people waiting to order in-person inside the newest In-N-Out location in Aurora Friday morning.

Denver resident Gabe Levin is considered to be a In-N-Out "fan boy" by some of his friends.

Levin has been to multiple locations across the United States and has collected at least six different t-shirts each time. On Friday when the newest restaurant in Aurora opened, he said it was a necessity to go.

"I told (my friend) yesterday I had to go today, and so I called him up early this morning and we went," Levin said while wearing an In-N-Out shirt and socks.

Hundreds -- if not thousands -- flocked to two of the newest locations of the California fast-food burger chain as early as Thursday evening to be one of the first people in Colorado to have a burger animal style (an In-N-Out specialty).

The Aurora Police Department tweeted around 2:30 p.m that the wait time was around 12 hours, and 90 minutes later said it had increased to 14 hours, and the line spanned 1.5 to 2 miles.

🍔🍟#FunFact A lot of people have asked, "How long was the line?" It's hard to estimate. What we know is the line wrapped around the mall twice, and there were some nearby hwy backups. Right now we estimate the line to be 1.5-2miles long & the wait is now 14 hours.

"This is a great day for us. We're super excited and blessed that we're here in Colorado, and it's pretty exciting to see this many people show up and try a burger today," said In-N-Outt's Assistant Vice President of Operations, George Charlesworth.

Levin and his friend Daniel Able said they arrived around to the mall area shortly before 8:30 a.m. and spotted hundreds of cars already lined up for the drive-thru.

Not wanting to wait, Levin got out of the vehicle to buy a shirt from the merchandise tent, and noticed the dine-in line was much shorter.

"I called (Able) and was like dude park and come over here, the line is much shorter," Levin said.

In all they waited about an hour to get the burgers and fries they desired.

Because of the large lines that started forming Thursday evening, officials made the decision to start selling food around 8:30 a.m., which was 90 minutes earlier than scheduled, Charlesworth said.

At 10:30 a.m. employees organizing the lines said the drive-thru line had hundreds of cars at a standstill at both directions of the mall complex, and expected the wait to be around three hours.

The in-person line was said to be around 90 minutes.

Police began guiding traffic and kept a close eye on the area as more people arrived to either try their first ever monkey style burger, or bringing back memories from home.

"We're originally from California, so this is a little taste of home. It's exciting and we've been waiting for this for awhile, so we figured we come out and try it," said Denver resident George Acosta, who said he had been waiting in line for double-double animal style for a little over 30 minutes.

As the morning continued to pass by lines continued to grow and the northbound exit of Alameda Avenue off Highway 225 was at a standstill for at least a half mile.

With the addition of In-N-Out within the Denver metro area, Levin and Able say they're beyond excited for the newest restaurant opening.

"It's dangerous. I'm already a member at a gym, but I might need to join another one," Levin said.

More than 120 staff members at Colorado's two In-N-Out Burger have been sickened with the coronavirus, part of an ongoing outbreak that has hi…

At least 80 staff members at Colorado's two newly launched In-N-Out Burger restaurants have been infected with the coronavirus, part of two sp…