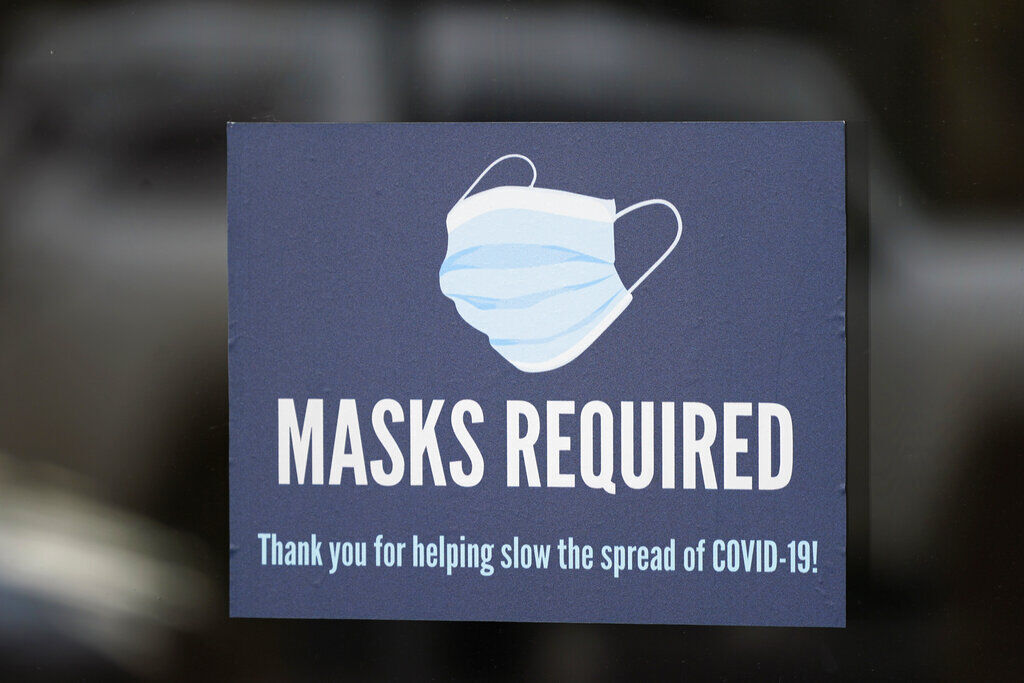 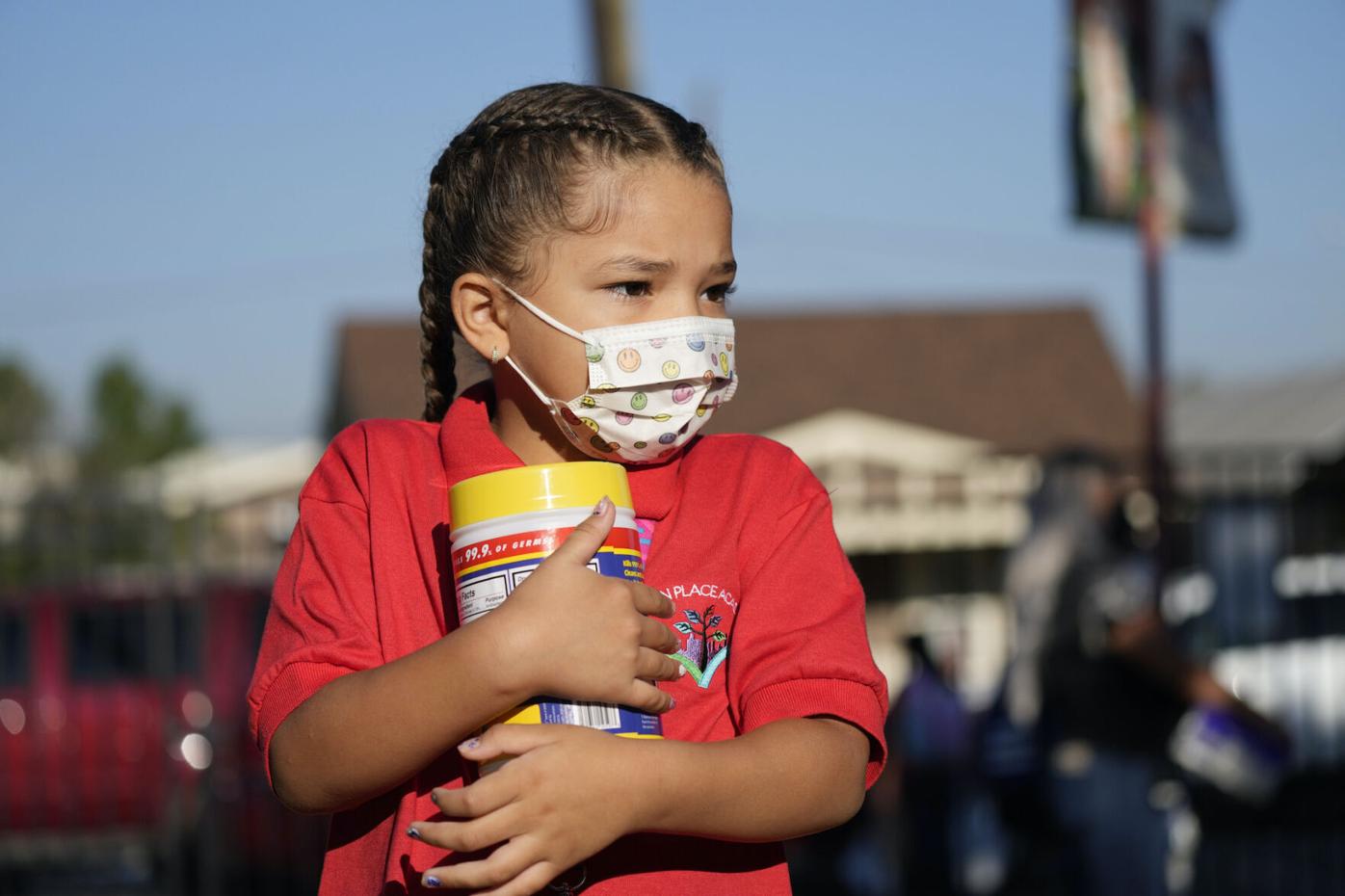 Dezirae Espinoza wears a face mask while cradling a tube of cleaning wipes as she waits to enter the building for the first day of in-class learning since the start of the pandemic at Garden Place Elementary School on Monday, Aug. 23, 2021, in north Denver. All students, visitors and staff are required to wear face coverings while in Denver Public Schools regardless of vaccination status with the start of the school year.

Dezirae Espinoza wears a face mask while cradling a tube of cleaning wipes as she waits to enter the building for the first day of in-class learning since the start of the pandemic at Garden Place Elementary School on Monday, Aug. 23, 2021, in north Denver. All students, visitors and staff are required to wear face coverings while in Denver Public Schools regardless of vaccination status with the start of the school year.

Most people in Adams, Arapahoe and Jefferson counties must wear a mask indoors beginning Wednesday, the boards of health for the counties voted Monday, and Denver officials say they will hold a press conference on their own mitigation measures Tuesday.

The votes, which took place within minutes of each other Monday night, reflect the sense of urgency felt by metro area health leaders as hospitals statewide fill up and Gov. Jared Polis continues to oppose a statewide mask order. Lane Dager, of the Jefferson County board, said Monday that he feared the mask order had already come too late.

Dager's board, which ran a seven-hour meeting that stretched into early Monday evening, voted 4-1 to require masks in indoor settings for people who are 3 years of age or older. It's a slight tweak from the initial draft, which included 2-year-olds.

Tri-County Health Department's Board of Health voted 5-1 on a similar order, which includes 2-year-olds.

Both orders begin Wednesday, and both allow businesses to exempt themselves from the masking requirement if they institute a vaccine passport system, which would include patrons showing proof of full vaccination before being allowed entry. Boulder and Larimer counties both have adopted such orders; a Boulder County official spoke in favor of the mandate at the Jefferson County meeting Monday night.

Dawn Comstock, the executive director of Jefferson County Public Health, told the board that she wanted the order to be effective as soon as possible so it would apply when Black Friday shopping begins later this week. The coming holiday season, beginning with Thanksgiving this week, along with the rise of flu season have accelerated officials' fears about statewide hospital capacity, which is being crushed by COVID-19, staffing shortages and a spike in more standard and trauma cases.

Denver, which this month has supported a statewide order, will announce its own measures Tuesday, the city's Department of Public Health and Environment said in an email to The Denver Gazette on Monday. Bob McDonald, the agency's executive director, said Friday that masks and vaccine passports are both on the table, but he declined to be more specific. In the past, metro counties have largely moved in lockstep with each other to ensure uniform uptake of policies.

In Jefferson County, where two hours of public comment was overwhelmingly against a mandate, public health officials said the order was an effort to blunt the spread of COVID-19 while not forcing capacity limits or lockdowns. As hospital beds fill up across the state to unprecedented degrees, local health officials across the state have asked Polis to institute a mask order, among other measures, though he has yet declined to do so.

Health officials from nearly every metro county — including those from Jefferson, Adams and Arapahoe counties — all sent Polis letters earlier this month asking him to institute public health orders including masking and vaccine passports. In its separate letter, the Jefferson County board urged Polis to show leadership and cited "extremely disturbing" fatality trends.

But Polis has not budged, and Comstock, the executive director of Jefferson County Public Health, said Monday it was "very unlikely the state will step in" and institute an order.

As the board weighed changing parts of their draft plan, Comstock stressed the need for the mask order to be put in place immediately, saying that each day "we're losing Jefferson County lives."

According to data presented in both meetings, the state has a 48% chance on its current trajectory to surpass 2,000 COVID-19 hospitalizations in the coming weeks. That would surpass last year's peak and would strain hospitals' capacity, if not overwhelm it. Polis has stepped in to clear the way for boosters and monoclonal antibody treatments to be more readily accessible, and he's asked hospitals and state leaders to surge 500 more beds by Dec. 15.

As of Monday evening, there were 1,565 Coloradans hospitalized with COVID-19, 83% of whom are unvaccinated. There haven't been that many people hospitalized with the virus in Colorado since the first week of December 2020. There were 81 intensive care beds — just 5% of total capacity — left, plus 635 acute-care beds, 7% of capacity.

In push to help hospitals, Polis eases path for people with COVID to get antibody treatment

Starting Monday, high-risk Coloradans infected with COVID-19 will be able to more easily access treatment to keep them out of the hospital, Go…