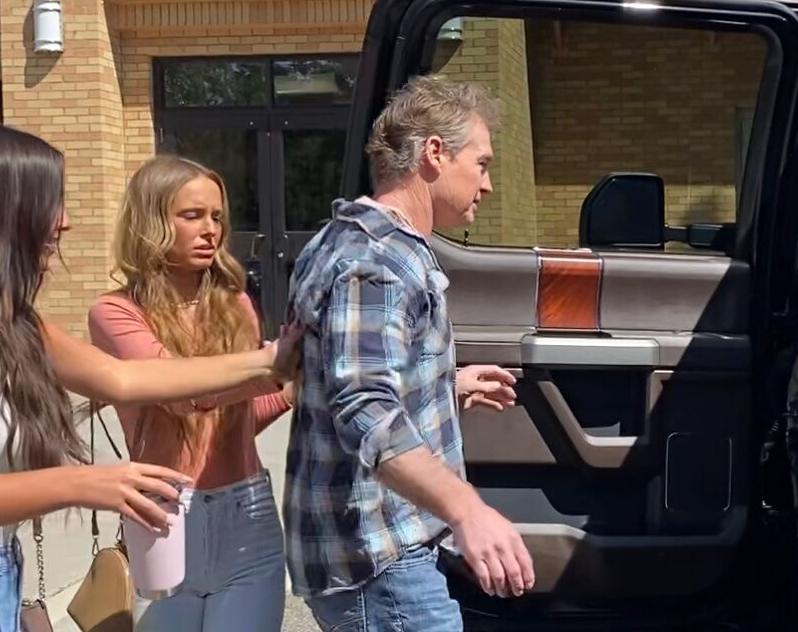 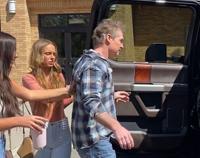 Barry Morphew leaves court Sept. 20, 2021, with his daughters. He is suspected of the alleged murder of his wife, Suzanne, last year. 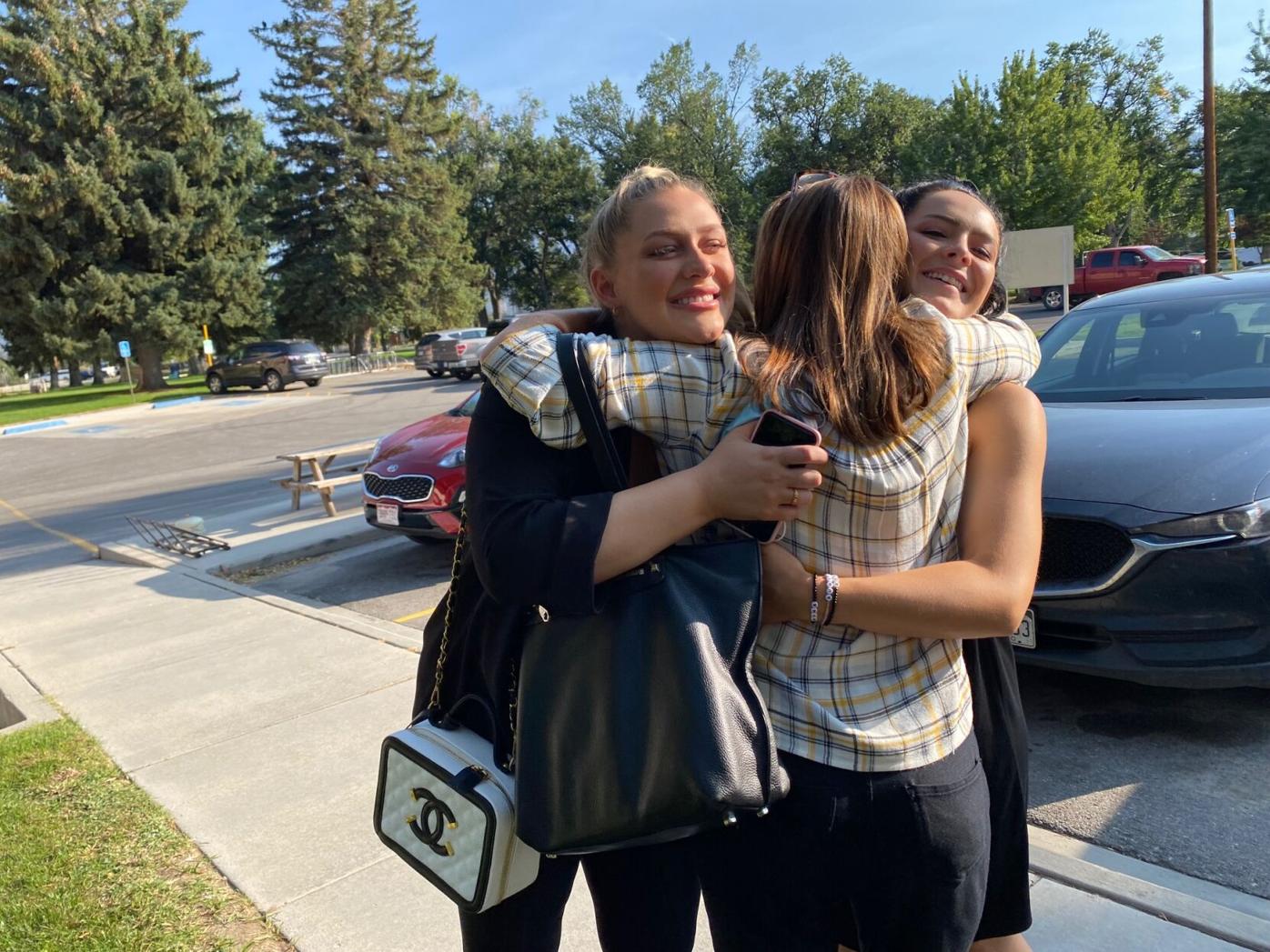 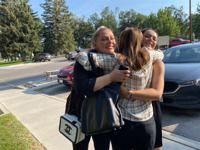 Tammy Skinner, one of Barry Morphew's friends who flew from Indiana to Salida to watch court proceedings, hugs two of his cousins after hearing he will go free on $500,000 cash bond. Morphew has been in jail since early May. 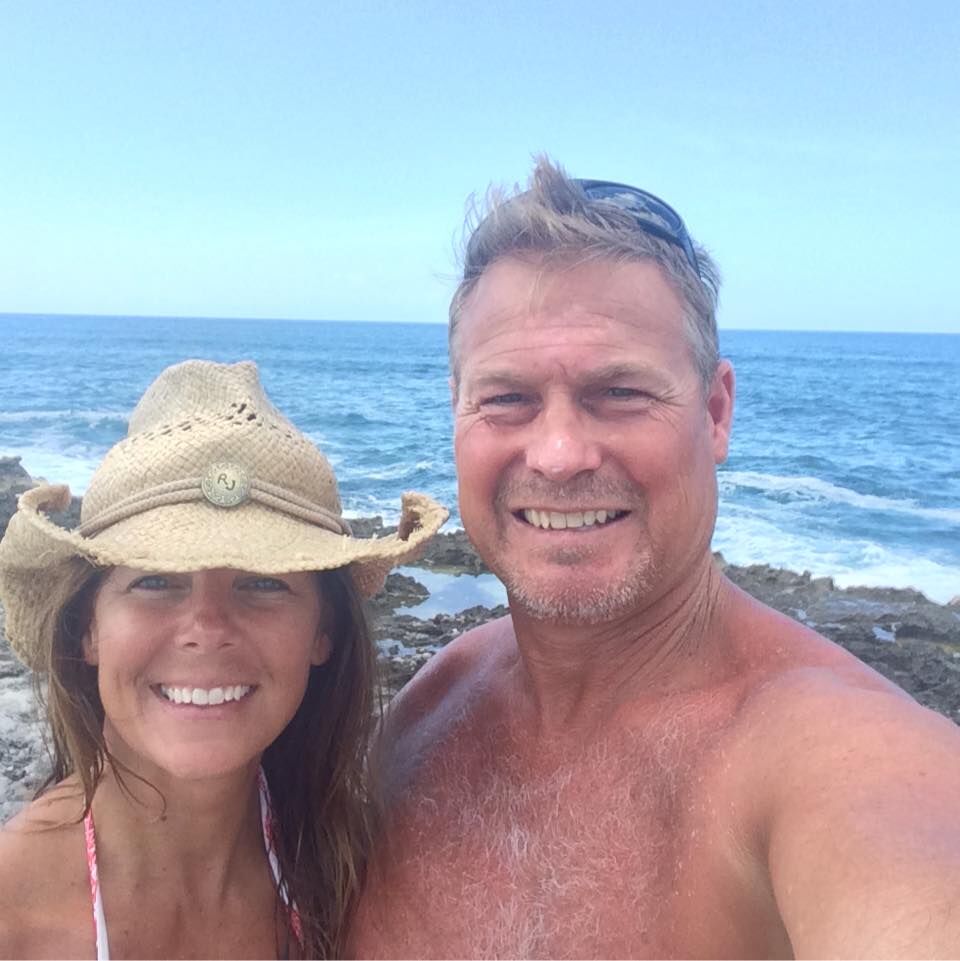 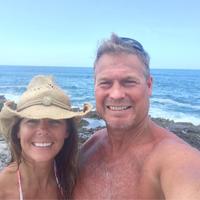 Barry and Suzanne Morphew moved to Colorado in 2018 from Indiana. Two years later, she went missing. Law enforcement says she's not alive and  has yet to find her remains. 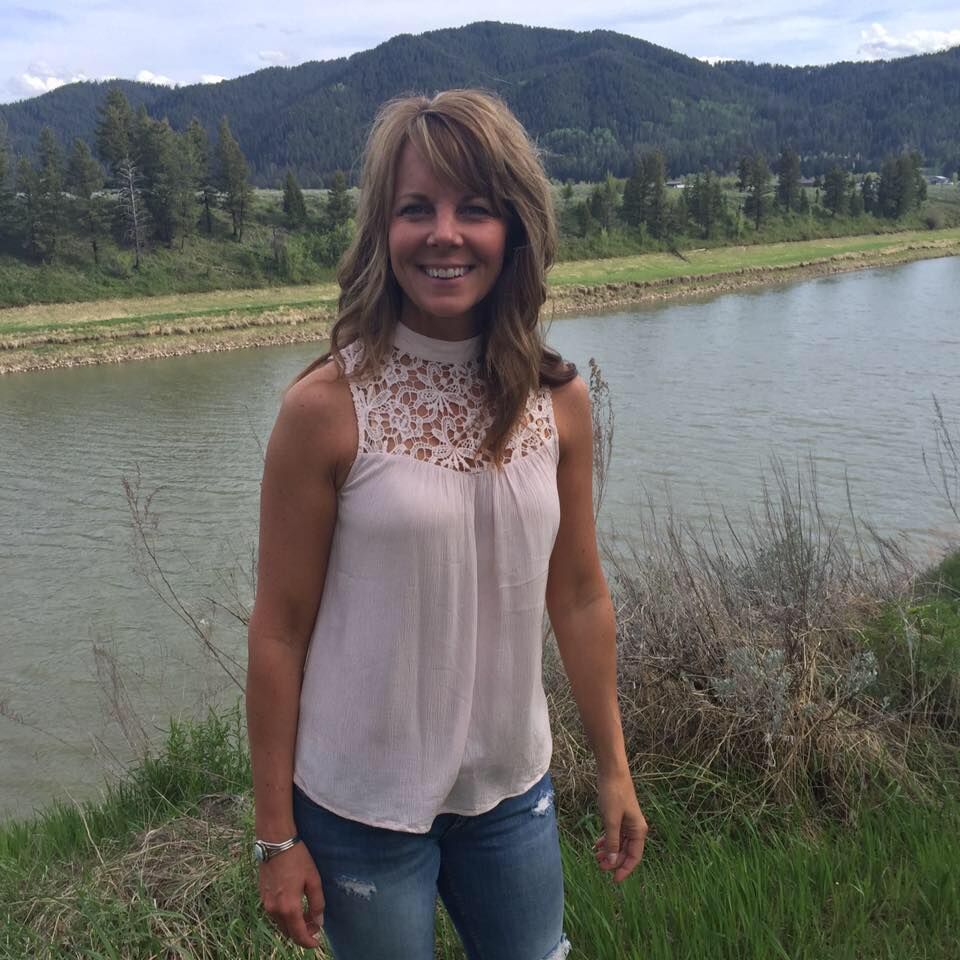 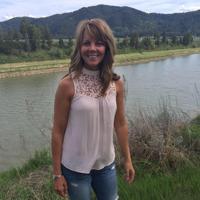 Suzanne Morphew's body has been missing since Mother's Day, 2020.

Barry Morphew leaves court Sept. 20, 2021, with his daughters. He is suspected of the alleged murder of his wife, Suzanne, last year.

Tammy Skinner, one of Barry Morphew's friends who flew from Indiana to Salida to watch court proceedings, hugs two of his cousins after hearing he will go free on $500,000 cash bond. Morphew has been in jail since early May.

Barry and Suzanne Morphew moved to Colorado in 2018 from Indiana. Two years later, she went missing. Law enforcement says she's not alive and  has yet to find her remains.

Suzanne Morphew's body has been missing since Mother's Day, 2020.

Minutes before Barry Morphew walked out of the Chaffee County jail, an ankle monitor on his leg and a daughter pushing him into a waiting vehicle, the 129-page court document explaining in great detail why he was arrested in his wife, Suzanne’s, murder was released to the public.

The document contained some new insight into the decline of 32-year marriage, but much of the case has already been revealed by prosecutors during last month’s four-day preliminary hearing.

Not revealed before in the voluminous document was the revelation one of the Morphews' daughters admitted to police the day after Mother’s Day 2020, when her mom disappeared, her parents were “not doing well” and that they were “both in an unsafe place emotionally.” It was the first time those words had come from the daughter herself, instead of being relayed through testimony thirdhand. Investigators read from Suzanne's texts while they were on the stand, as during such hearings, hearsay is admitted.

According to court documents, on May 10 at 3:50 p.m., one of the daughters texted the neighbor who reported Suzanne missing, "I'm just so sad. ... I texted mom for Mother's Day and she still hasn't answered and I'm scared her and dad probably got in a big fight. ... I might have to be home a lot more and it will probably be the worst summer of my life."

The couple’s two grown daughters were present at all four days of hearings, many times sobbing as, bit by bit, information about the possibility that their dad killed their mother trickled out through testimony. Barry's mother and sister have also been in the courtroom to support him, and a contingent of friends and family flew out from Indiana to support him during Friday’s hearing.

Hanna, a first cousin who would only give a first name for fear of retribution, told The Gazette, “I’ve known Barry my entire life. He and Suzanne hung out at my parents’ house a lot. He’s absolutely not capable of doing this.”

Hanna said she hopes Suzanne’s body is found because she thinks once that happens, her cousin will be cleared of murdering his wife.

The affidavit revealed some observations from Chaffee County sheriff's deputies who were first on the scene, including one note that Barry's Bobcat had barefoot marks inside the bucket and that the cutting blade had been recently replaced.

On May 23, while searches were being conducted on the Morphew family home, three bloodhounds trained to detect human decomposition alerted to the bed of a flatbed trailer parked in the west driveway. Then all three dogs alerted to Barry's Bobcat, according to court documents, which added that one of the animals "jumped into the Bobcat and even tried to lay down on the driver's seat."

Later prosecutors discounted the bobcat as being involved in Suzanne's disappearance.

The affidavit, released Monday, revealed a 50-item list of grievances about Barry and her marriage that Suzanne had written and saved in her cellphone on Friday, May 8, a day before her last known communication. Reasons for wanting to leave their 32-year marriage included, in her words, that her husband “chased me around resort and threatened,” “mental abuse while drinking NYE — name calling/said I only need for $,” “shame and guilt daily for not meeting expectations” and “wiring money from inv account without asking or discussing.”

Suzanne's cellphone was never found, but investigators were able to recover the notes from her iCloud account.

Law enforcement relied on text messages between Suzanne and her husband, friends and family to build their case. But it was a May 6 text that Barry had allegedly deleted from his phone that forensic cellphone experts recovered that prosecutors say is key to the murder case.

That day, the 49-year-old mother of two texted her husband that the marriage was over. “I’m done,” she wrote. “I could care less what you’ve been up to for years,” adding that they needed to "figure this out civilly.”

And it was the messages that Suzanne didn’t respond to that provide clues as to when she disappeared without a trace, they say. On the morning of May 10, the Morphew daughters, who were on a camping trip, wrote Mother’s Day messages to their mom that never received a response. Further, Barry said he texted his wife all day, including a morning Mother’s Day message that went ignored.

Suzanne's best friend from college, Sheila Oliver, told investigators she also tried to reach her that day, sending three Snapchat messages between 6:40 and 6:48 p.m. with no luck.

Just days before Suzanne had texted Oliver that Barry “prob doesn’t think I’m strong enough to do it. Given finances.” In the same conversation, she called her husband a “Jekyll and Hyde” and wrote that he was begging for another chance. “I’m so torn,” Morphew, 49, told her friend on text. “But in my heart, I know who he is.”

Suzanne’s last known communication, according to court documents, was a LinkedIn message on Saturday, May 9, to a high school friend with whom she had allegedly been having a two-year affair. At 2:11 p.m., she wrote to Jeff Libler, who was in Michigan at the time, “Hey, I’m on Wa," referring to a WhatsAp application they often used to speak to each other.

Telematix information from Barry's truck showed that he arrived at the home 30 minutes later. Around this time, tracking data from his phone showed Barry was moving around the house “quite a bit.” He explained the movement to investigators by telling them he was chasing a chipmunk with a .22 caliber rifle, saying, “When I’m home I just walk around and shoot ‘em. Just keep going around the house," court papers alleged.

Investigators did not know about Suzanne’s lover until six months after she disappeared, according to court documents. In November 2020, when Libler first interviewed with them, he gave them DNA, passwords to his social media accounts and credit card charges for May 9 and May 11, made at stores in Michigan. He is not considered a suspect in her death, according to prosecutors.

It’s unclear whether Barry knew about Libler, but court documents mention that on May 6, he accused her of having a boyfriend. And, according to Suzanne’s text messages, Barry was suspicious, even taking her phone away from her on a trip to Mexico.

Barry's insistence to investigators that he didn’t know about the physical affair was a central theme of his conversations with them. Still, even though Barry denied knowing about Libler, he said he suspected she may be having an emotional affair.

“I had some intuition, but I would never think it was a physical thing,” he told investigators in March 2020. “If you would've said she’s texting somebody and having an emotional conversational affair, maybe I could've — but physical? She loves the Lord. She knows God’s word. We, I mean, we gotta answer to the Lord when we do things like that.”

Barry was arrested last May 5, almost a year to the day that his wife went missing.

Barry's attorneys have maintained his innocence, bringing up several pieces of evidence, including touch DNA found on the glovebox of Suzanne’s Range Rover that matches at least one unknown sex offender, a couple of unexplained pings to her phone just after midnight on May 9 and the fact that Barry visited a hot tub dealer on that afternoon. They also say his truck never left their home that night and that he didn’t have enough time to dispose of a body in the dark while the ground was frozen.

“The DA’s office did this with a target audience that is not the judge. They wrote this to sway court of public opinion and taint a jury pool,” Nielsen said.  “It is imperative to preserve his right to a fair trial. Release of this will damage his ability to get a fair trial.”

The judge set the trial date for May 3 through June 4.

Suzanne Morphew’s older sister, Melinda Moorman, has been watching court proceedings over a live court feed created especially for her family. She tells The Gazette her most pressing concern is for the Morphew’s daughters and her nieces Mallory and Macy Morphew.

“Sometimes the pain of living in denial becomes greater than facing the truth,” Moorman said. “My heart is for Mallory and Macy and their future healing from this tragedy.”

Barry Morphew, who was charged with murder a year after his wife disappeared on Mother's Day 2020, could bail out of jail as soon as Monday ahead of a trial in her death, a judge in Salida ruled Friday.