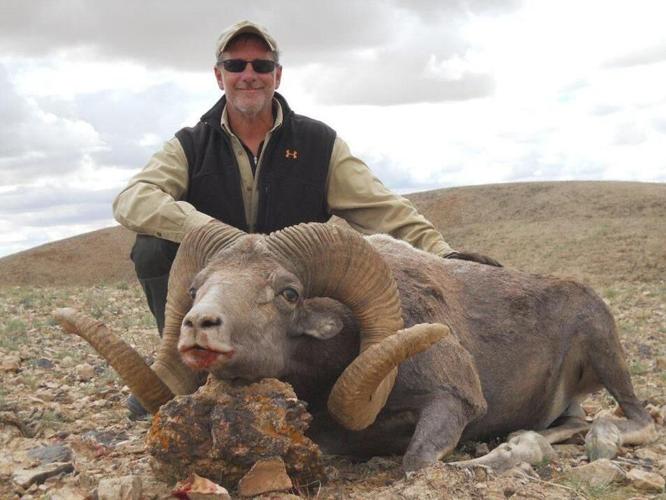 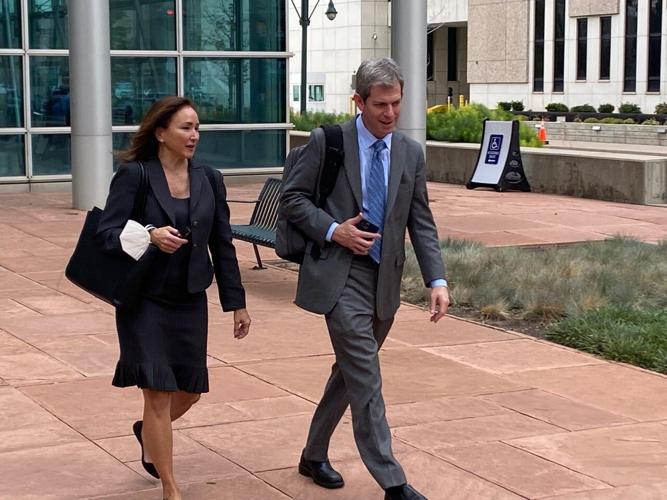 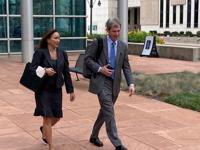 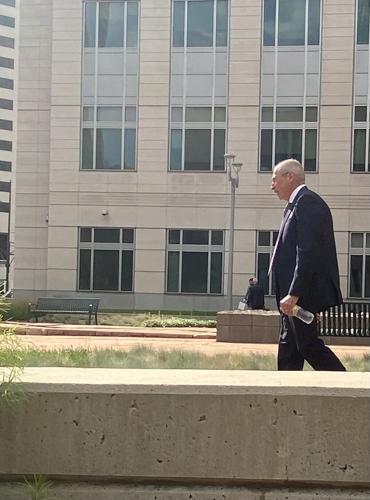 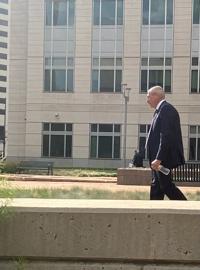 Ralph Finizio, brother of Bianca Rudolph who died during a safari in Zambia, walks out of the Alfred A. Arraj Courthouse after a long day of jury selection. Opening statements start Wednesday and Finizio is among the first witnesses scheduled to take the stand 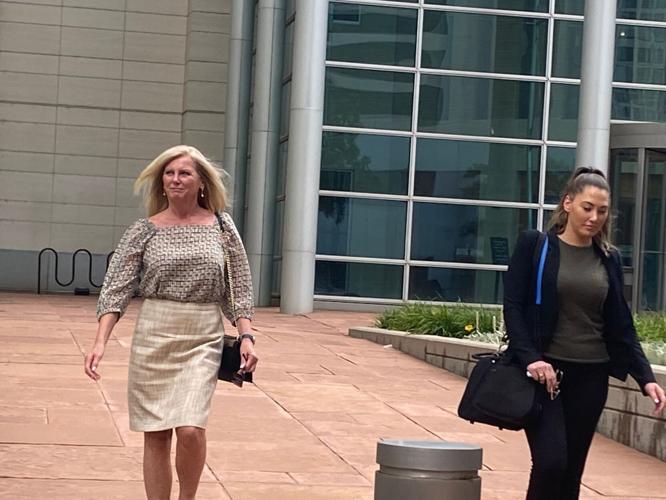 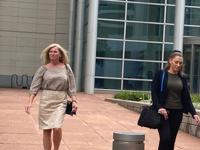 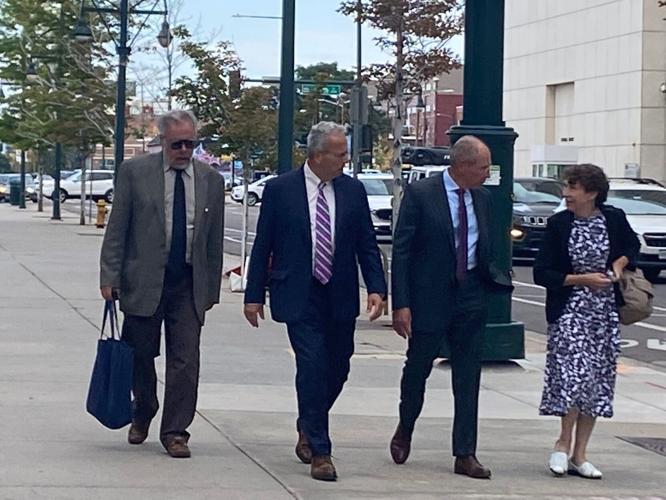 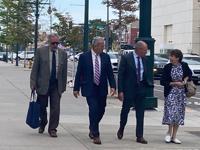 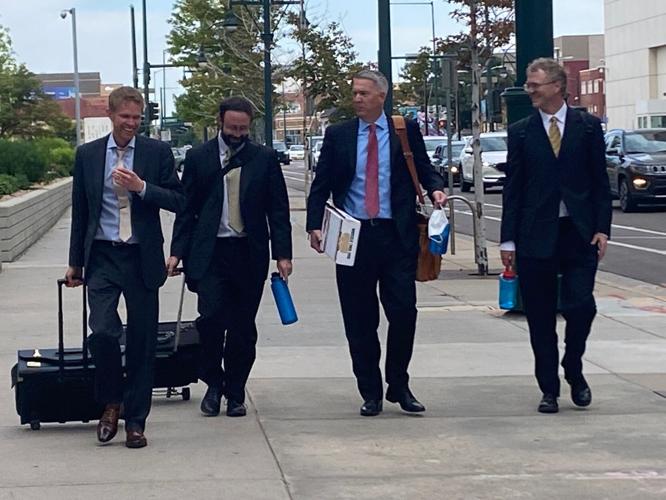 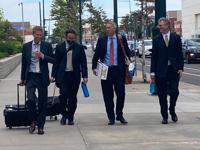 Ralph Finizio, brother of Bianca Rudolph who died during a safari in Zambia, walks out of the Alfred A. Arraj Courthouse after a long day of jury selection. Opening statements start Wednesday and Finizio is among the first witnesses scheduled to take the stand

After 14 days of exhaustive, riveting and salacious testimony, the fate of a former Pittsburgh dentist accused of killing his wife six years ago while on a leopard hunt in south-central Africa is in the hands of six men and six women. Two alternates were released and ordered to stay away from media reports in case one of the 12 either has a pressing personal commitment or comes down with COVID during deliberations.

The jurors deliberated briefly on Friday and will resume deliberations on Monday.

The three-week trial ended when the defendant Larry Rudolph, an avid big game hunter who built his wealth with a dental franchise and investments, took the stand in the final two days  of his murder trial. He is facing several counts including one count of murder of a U.S. national in a foreign country and one count of mail fraud.

His mistress, Lori Milliron, 64, is charged with nine counts including lying to a grand jury, with obstruction during that process and with being an accessory after the fact.

Milliron, who is not in jail, was given permission to remove her ankle monitor during trial and sat with her attorneys at a conference table adjacent to Larry Rudolph's team.

Her lover of at least 10 years was arrested in December 2021 on the heels of a trip the couple took to Cabo San Lucas.

The case was tried in Denver because one of the insurance companies which gave payouts is based in Colorado.

Depending on which side provided the descriptions, Bianca Rudolph was either an unknowing victim of a controlling husband, or an adulteress who, after fighting to save her marriage, was happily reuniting with him.

The trial was dotted with tales of ultimatums by Milliron for Larry Rudolph to leave his wife, orders by Bianca Rudolph for her husband to fire Milliron, and a sexless marriage described by the Rudolphs as a "don't ask don't tell" whenever one of the two strayed with other people.

Defense attorneys accused the prosecution of distracting jurors with the noise of gossip and cherry-picking facts to suit their narrative. But FBI agents spent three months in Zambia interviewing safari guides, a coroner and law enforcement.

Friday, closings from attorneys on three sides were so heartfelt that U.S. District Judge William Martinez thanked them for honoring their clients with such authenticity.

Assistant U.S. Attorney Bryan Fields’ voice shook in the final minutes of his rebuttal. One by one, he held his fingers up for the jury as he counted off how long it takes to sit through 15 seconds – the amount of time safari guide Mark Swanepoel testified that it took him to run 35 yards to the couple’s cabin after the sound of a gunshot blasted the peaceful early morning hours Oct. 11, 2016. Those seconds gave Larry Rudolph plenty of time to get in place in front of the bathroom door after he shot his wife, prosecutors said.

“Here is the truth beyond a reasonable doubt,” continued Fields. “Larry Rudolph was the only other person in that cabin, the shotgun was in perfect condition and the wound was not self-inflicted.”

Fields said that Bianca Rudolph was shot straight through the heart from an angle which tilted down, eliminating the theory that the gun went off accidentally when it dropped.

But Rudolph’s attorneys insist Bianca Rudolph’s death was a horrible accident which happened when she lost control of her husband’s rare Browning 12-gage shotgun as she was hurriedly packing their belongings before embarking on the 4-5 hour road trip to the airport.

Her 67 year-old husband said he woke up at 4:15 am and took his second cup of coffee to the bathroom. According to Larry Rudolph, his wife’s last words were a call for him to come and help her.

He said he heard the shot, pulled up his pants, and ran out of the bathroom to find his wife on the ground in a pool of blood, shot in the left chest.

But an iconic photo of the frantic scene, showed Larry Rudolph from behind, bending over his wife, who was wrapped in a zebra blanket. Fields pointed out that despite the fact that he testified that he was pulling his pants up in a rush to exit his morning toilet ritual, the photo showed his green polo shirt perfectly tucked into his pants, his belt snugly in place.

“There was no blood on Larry’s hands or body and he was hysterical. They tried to save her life,” Markus calmly told the jury.

That day, Rudolph and Swanepoel went to the police. The next day, they brought her body to the hospital. The autopsy was criticized by renowned forensic pathologist Michael Baden as being sloppy. The trajectory of the pellets were not tracked by a Zambian coroner with few resources and the wound was manipulated with a ruler.

Markus acknowledged that the case was not about whether his client was a likable person.

Indeed, the jury heard plenty of testimony about Rudolph, a dentist who owned Three Rivers Dental, a lucrative Pittsburgh franchise. Former employees talked about his affairs, and Oct. 18, a day after he got to the U.S., he started the ball rolling on an eventual $4.8 million insurance payout.

While on the stand he admitted that he lied under oath during deposition in a lawsuit which he brought himself on Safari Club International, that he flew to Las Vegas a day after Bianca Rudolph’s funeral. He was an avid hunter who owned countless game trophies including a polar bear, leopard rugs and a white rhino.

But none of that is evidence that he killed his wife, explained the defense, who said the government team relied on gossip and “noise” to build their case.

“There is no direct evidence,” said Markus, who said that if this were a case of likability, they would lose. “This isn’t about whether you like Larry or not. But I’m fighting with everything I have. I have an innocent man sitting next to me.”

Present in the courtroom with her own lawyer was Milliron, who met Rudolph in 2001 when she started as a hygienist at Three Rivers Dental and was described as “the love of his life.”

She eventually was promoted and ran the multi-million dollar practice. According to financial documents, Milliron received multiple thousands of dollars in cash payments from Rudolph, which he testified she retrieved from the company safe. Under oath with the grand jury she gave vague answers about the payments, first saying she didn’t know the reason for the cash, and then changing her mind.

“I did know why he gave me the money. But not specifically.”

Not long after Bianca Rudolph died, her husband supplied his mistress with a credit card and the two moved in together. Prosecutors said that with the $4.8 million in insurance money, Larry Rudolph bought two expensive vehicles and built a $3.5 million home in a posh Phoenix suburb.

During the federal prosecutors’ closing remarks, Milliron would occasionally shake her head “no” when she disagreed with their portrayal of her as a greedy second fiddle to Bianca Rudolph.

At times, Larry. Rudolph pinched the skin between his eyebrows and glared as Assistant U.S. Attorney Bryan Fields’ laid out the government’s murder case against him.

Dentist accused of murdering wife on safari will take the stand, attorney says

“He knew Zambia was the perfect place to commit the crime because he could control the narrative,” said Fields, in a high-energy delivery.

There was no love lost between Bianca Rudolph’s family and the husband she met 34 years ago in a college cafeteria. In the courtroom for the entire trial were her two brothers and a cousin, who groaned when Larry Rudolph testified that he “did the right thing” when he paid the hospital bill for a guide who was injured during a hunt.  Prosecutors mentioned that Vince and Ralph Finizio, asked Larry Rudolph for documents at their sister’s funeral and were refused.

During closings, Markus turned to the right side of the courtroom and addressed Bianca Rudolph’s row of supporters, “I’ve acknowledged all of you,” he said. “What? No!” exclaimed one of them.

On the opposite side of the gallery sat the Rudolphs’ two adult children, Julian and AnaBianca, who bent over shielding their view of a monitor which occasionally showed grisly photos of their mother’s body.

Once, Fields accidentally called for the photos without a warning to the courtroom. Markus implied that he did it on purpose.

Early Wednesday afternoon, once the jury was sent to deliberations, Larry Rudolph lingered, fist-bumped his lawyer, and turned to give a wave and a sign of the cross to his children before guards exited him through a side door.

With only a verdict in the balance, hostilities appeared to be replaced with understanding. In the hallway outside of courtroom on the 8th floor, Bianca’s entire immediate family embraced one another, some wiping tears.

A federal judge will extend his temporary restraining order that prevents certain new gun safety regulations in the town of Superior from taking effect, while the parties to the legal challenge prepare to make arguments on recently-issued precedent from the U.S. Supreme Court.