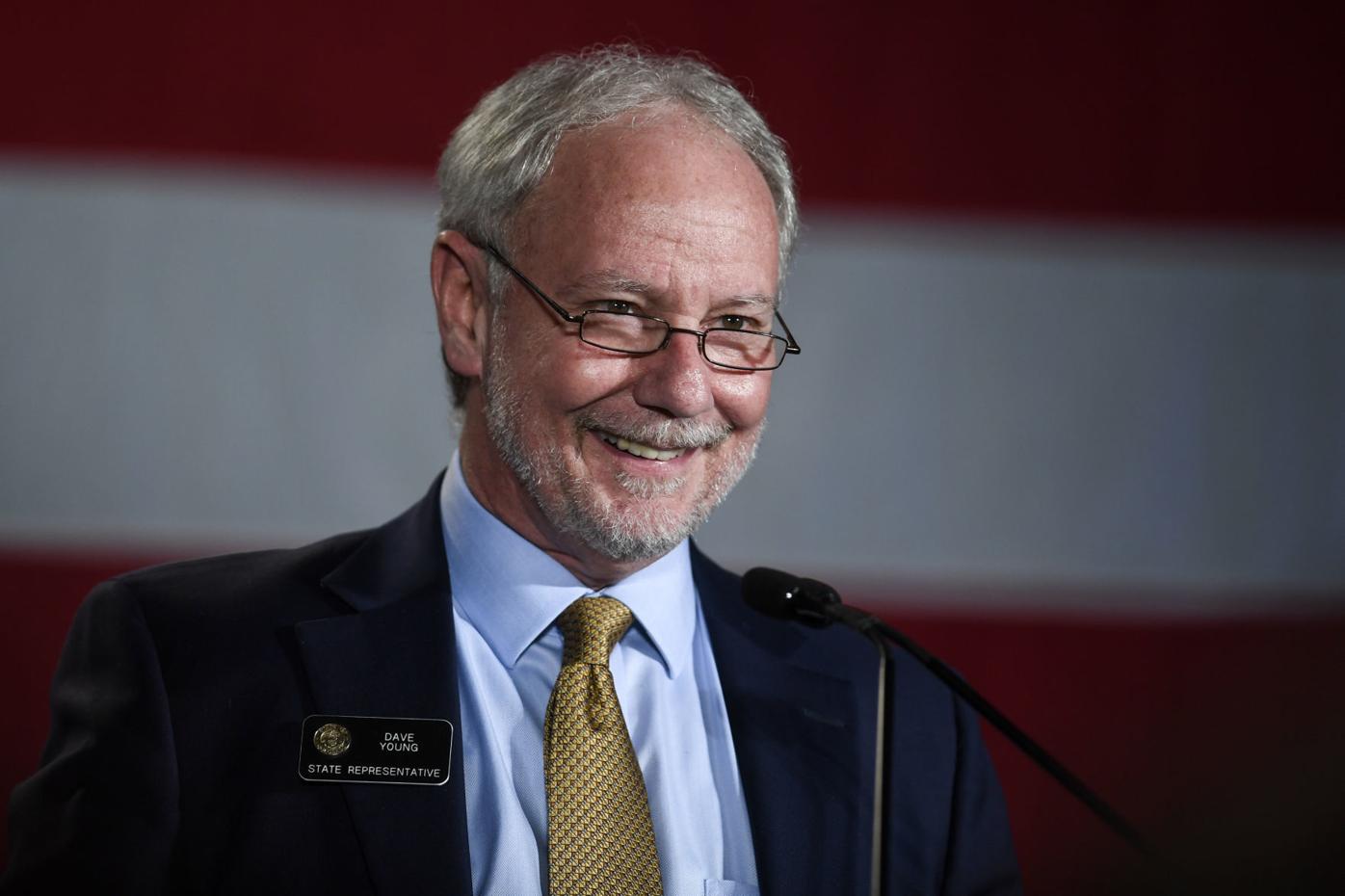 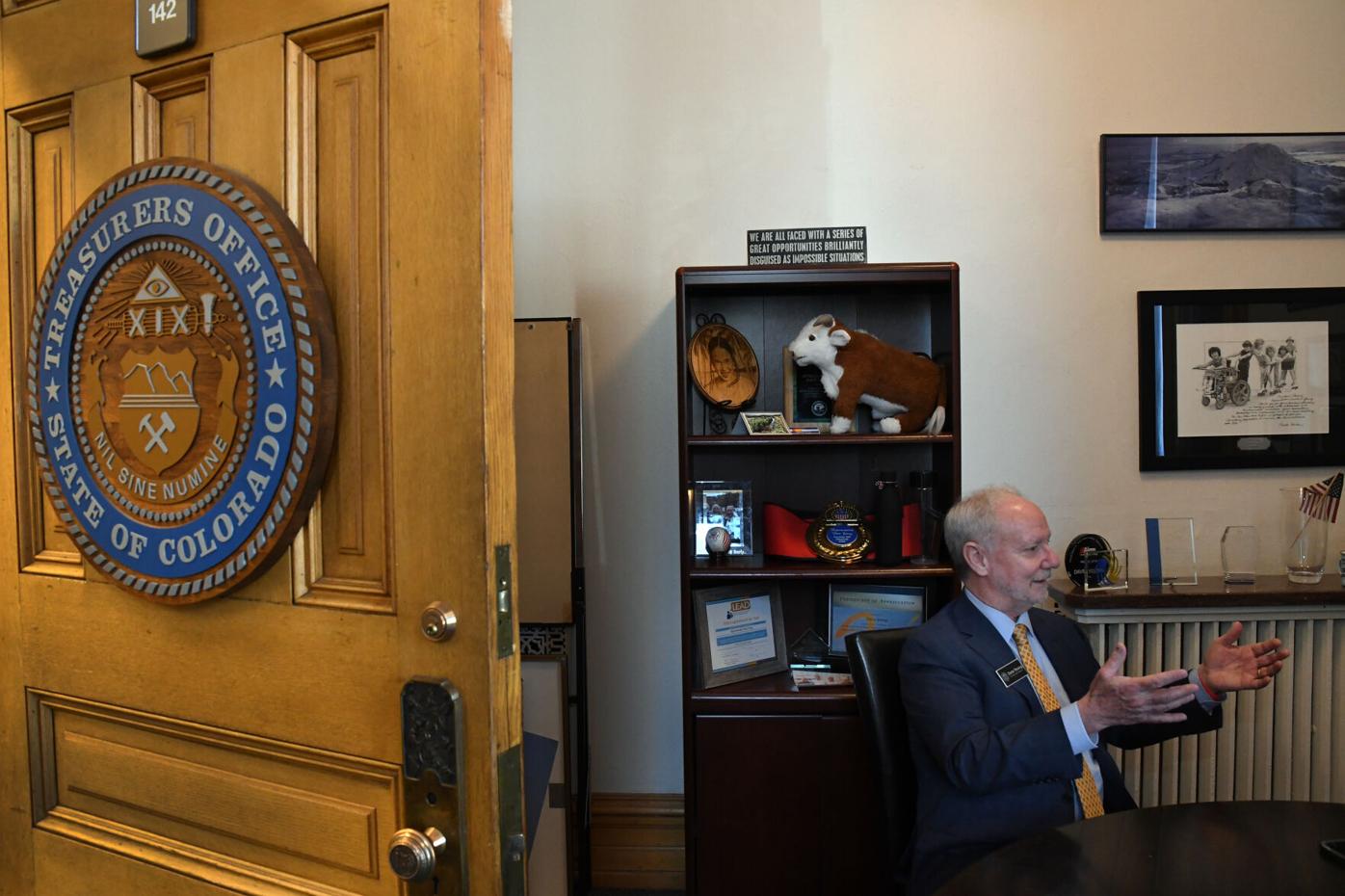 State Treasurer Dave Young has a discussion inside his office at the Colorado state Capitol on May 6, 2021, in Denver.

State Treasurer Dave Young has a discussion inside his office at the Colorado state Capitol on May 6, 2021, in Denver.

If Dave Young doesn't do his job, everybody in Colorado pays, one way or another.

He will make the case that he's been a good guardian of state's purse as the Democrat, elected state treasurer three years ago, seeks a second term against a Republican yet to be identified.

Young makes sure payments for state agencies don't lag behind, which would tank the state's credit rating, read: the cost to taxpayers of borrowing money. Then it's his job to invest money that's sitting around, so it yields a nice profit to help fund important state programs. That's not chump change. Try $6.5 billion in more than 750 funds. And if we can’t get our dang stuff back from the state, then the dang state should answer for that. It’s our stuff.

Politically speaking, the treasurer’s office has been a springboard to the governor’s office. Republican Walker Stapleton took that bounce in vain in 2018, falling to the charisma and checkbook of Democrat Jared Polis. The last Republican governor, Bill Owens, was a treasurer, and so was Democrat Roy Romer.

We’re getting pretty late in the game, and I couldn’t tell you with any certainty who Republicans are going to run for the office. The two most prominent names batted around are former state Senate President Kevin Grantham and former Stapleton running mate Lang Sias, a former state representative.

Grantham tells me he's still somewhere in between a yes and a no. He has no burning desire to run statewide and work in Denver again. He was seated as one of three Fremont County commissioners in January. He's a viable, loyal Republican for a party in need, though.

Sias didn’t call me back, but after we talked last year, Insights reported, "Sias marks his name off GOP wish list."

Jon Caldara: "Mission and statements are important for any organization because they lead to measurements."

Don't expect them to go head to head. I predict if one viable Republican gets in the race, another won't. The Colorado GOP can't afford a divisive, costly primary.

Any viable Republican who announces has a standing invitation to lay out their agenda in Insights. Call me. If I don't call you back, you're not viable.

Young and I had a long, detailed chat late on a Friday afternoon about what he has to show for three years in office. He can point to helping small businesses, retirement savers and the general financial health of the state.

Columnist Eric Sondermann analyzes the slate of Colorado's up and comers. Here's the road ahead for Democrats.

With the state budget in a free fall last year, Young looked elsewhere to raise the state's $50 million in seed money. He sold tax credits. The remaining $200 million came from the private sector eager to make loans, with the government recouping part of the profit margin.

“This CLIMBER program will be one I think will restore our economy,” Young boasted.

Insights also told you last. year about the secure savings program, a scheme to jumpstart retirement savings that had languished in the General Assembly until Young and fellow Democrats passed Senate Bill 200 on a party-line vote last year.

Between 900,000 and 1 million Coloradans didn't have access to a retirement savings plan through work, largely because it's too expensive for a small business to administrate and too intellectually daunting for a lot of workers to seek out. The state-backed plan must be offered by any business that's been around two years or longer with five or more employees.

In the summer between election years, the dog days are the lull when the political world tends to recline in anticipation of the busy months ahead, between legislative sessions and typically before campaigns are in full swing. This year, the pace hasn’t slowed a bit in the U.S. Senate, with lawmakers scrambling to reach a vote on a massive infrastructure bill as the weeks-long August recess looms, but back in Colorado the political world appears to be taking a breather.

Here's where it gets a little sticky, which drove off Republican votes: Employees are automatically enrolled in a state-sponsored Roth IRA, unless they opt out. Studies show most won't, and those are people less likely to wind up dependent on the public dime when they get old. The silver tsunami of Baby Boomers will soak future taxpayers, Young said.

Government operates a lot like my previous employers in the newspaper business.

I’ve seen hard times come, and it never fails that the first people cut are those selling ads and subscriptions.

Cutting your way to profitability is a sugar high that wrecks your long-term health; true for people, true for an industry.

The state legislature is a junk food junkie, habitually shortchanging the treasurer’s office. Each year for the last two decades, the treasury has been the least funded of all the stand-alone agencies.

The office has 35 employees, give or take, to handle paying the daily bills of state government, safely investing cash that's sitting around and, not the least, returning money and property to owners or heirs that somehow wound up the state’s custody.

Young said he inherited a backlog of about 13,000 claims. In his first full fiscal year in office, his office processed 28,835 claims worth $47.3 million.

Ernest Luning: "In conversations with political insiders lately, it's become nearly as common as remarking on the weather to ask if there's news about a Republican running for any number of top-ticket offices, and the answers are usually the same."

He updated and automated procedures. For one, he routinely publicized and closely managed the program year round, instead of an annual major publicity campaign for the Great Colorado Payback that brought in a deluge of requests that overburdened the system and the small staff.

If the job is paying bills, making smart investments and taking care of people's money and stuff, the understaffed, underfunded state treasurer's office is getting it done.

The former Greeley math teacher, Democratic state representative and member of the legislature's Joint Budget Committee doesn’t count success in media hits, unlike the others elected from border to border.