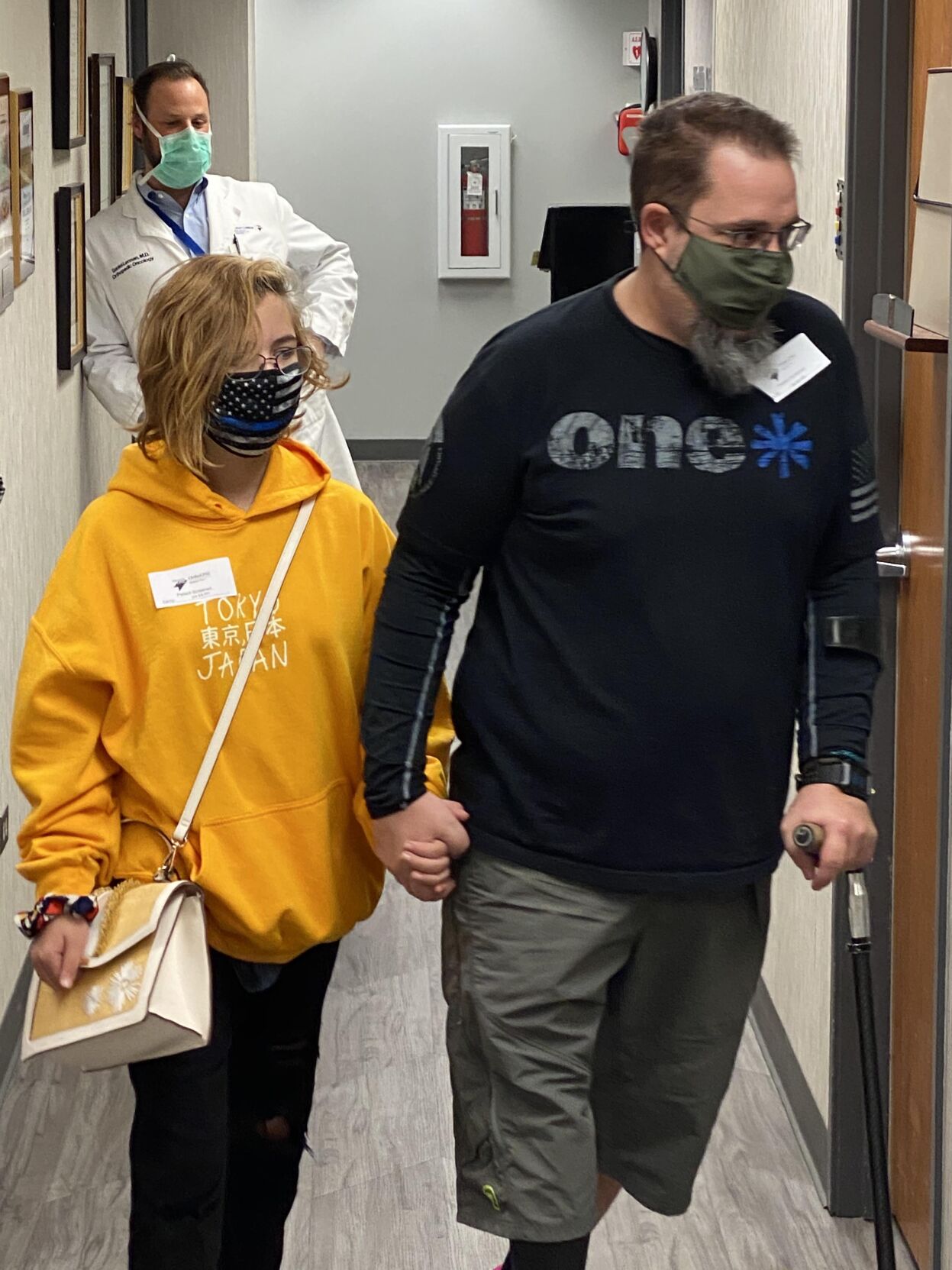 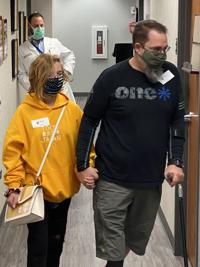 Assaf Dory and his daughter Mechal walk together as one of Assaf's providers looks on. After receiving a cutting-edge prosthetic, Assaf wanted to walk hand in hand with his daughter. 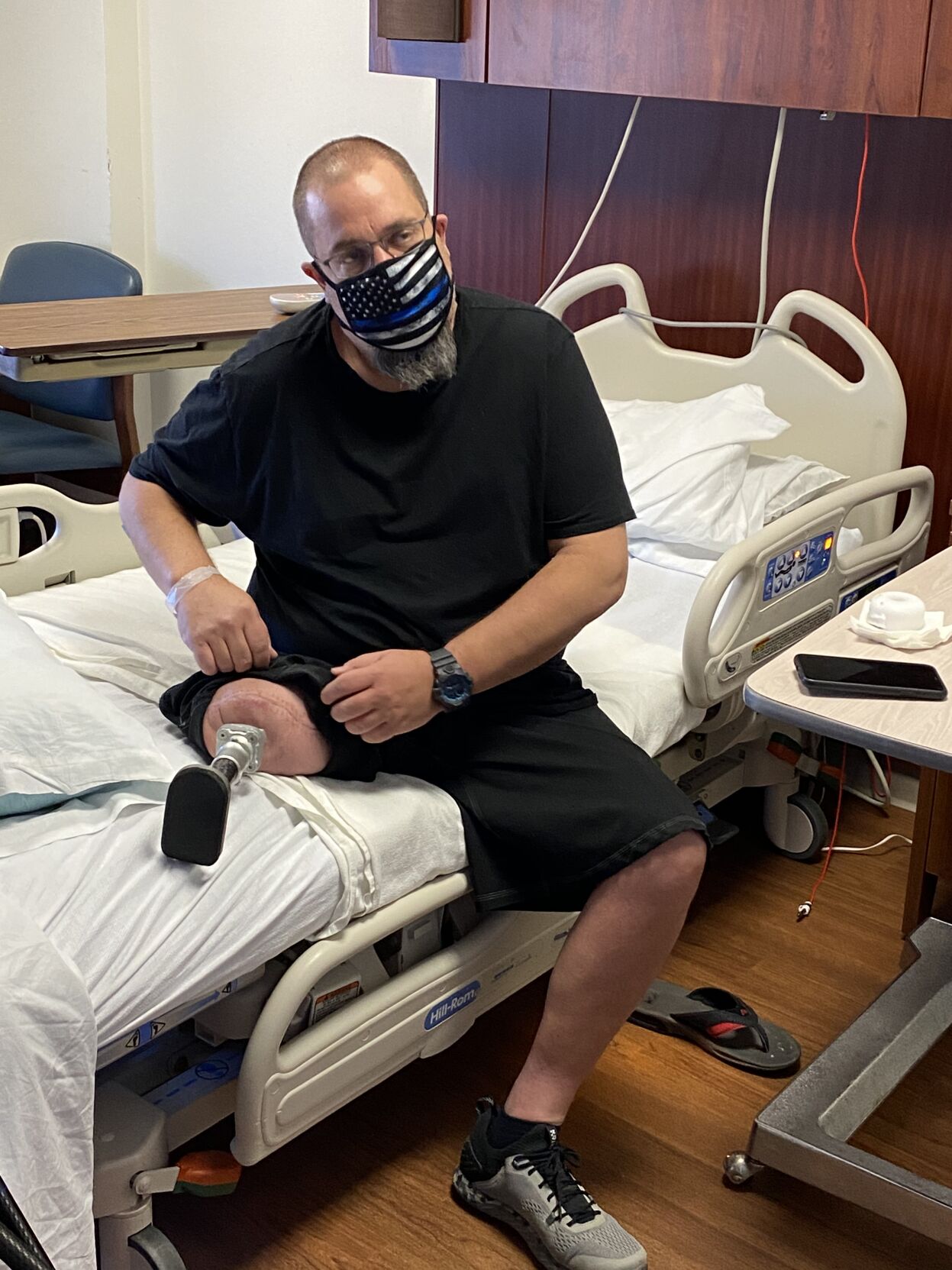 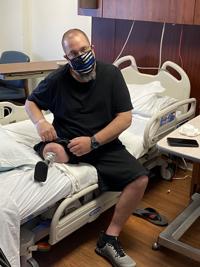 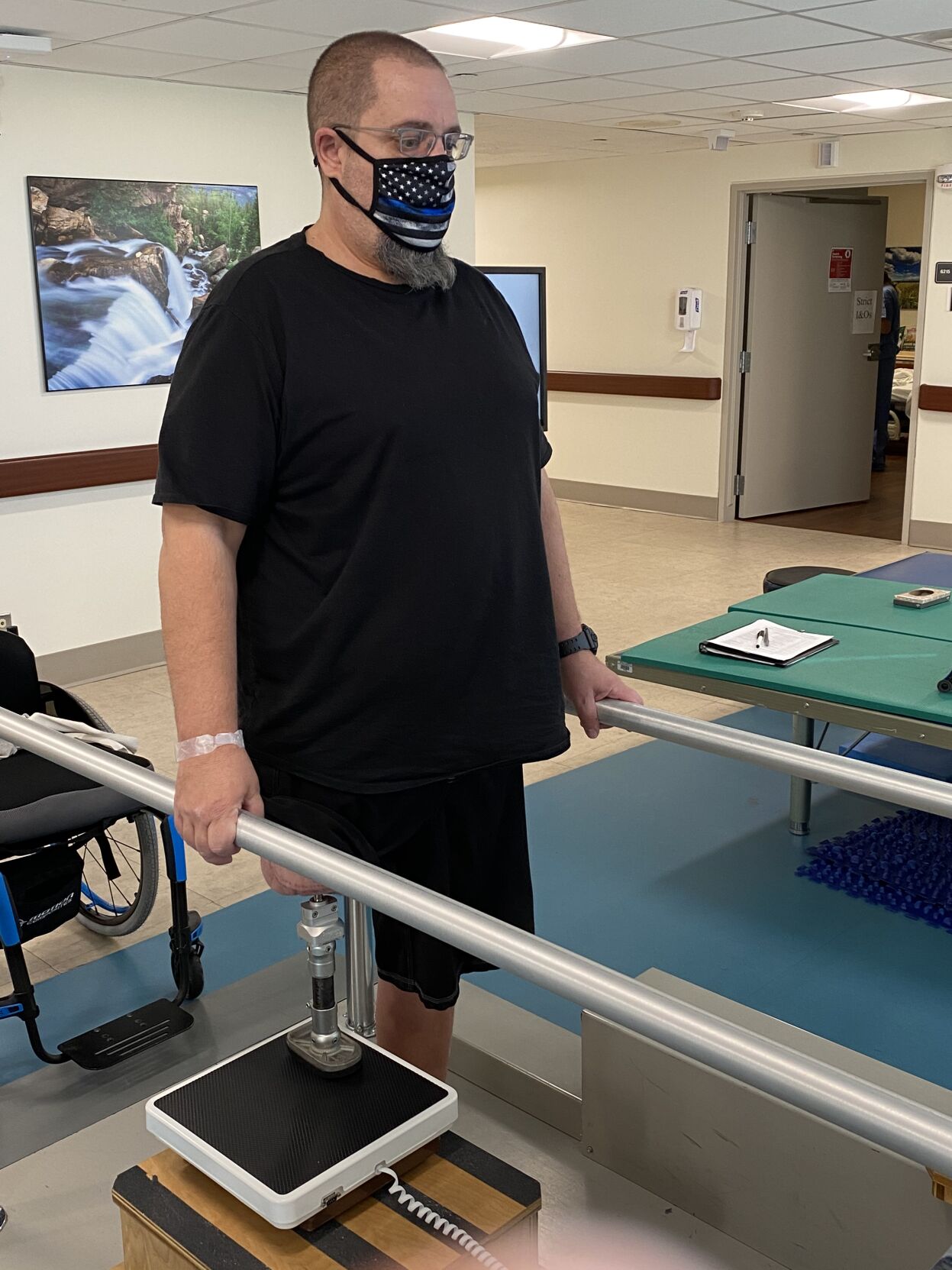 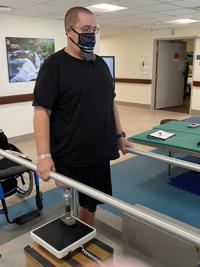 Assaf Dory tests how much weight he can hold on his new prosthetic. Doctors have kept him on a strict rehab regimen to ensure he recovers properly. 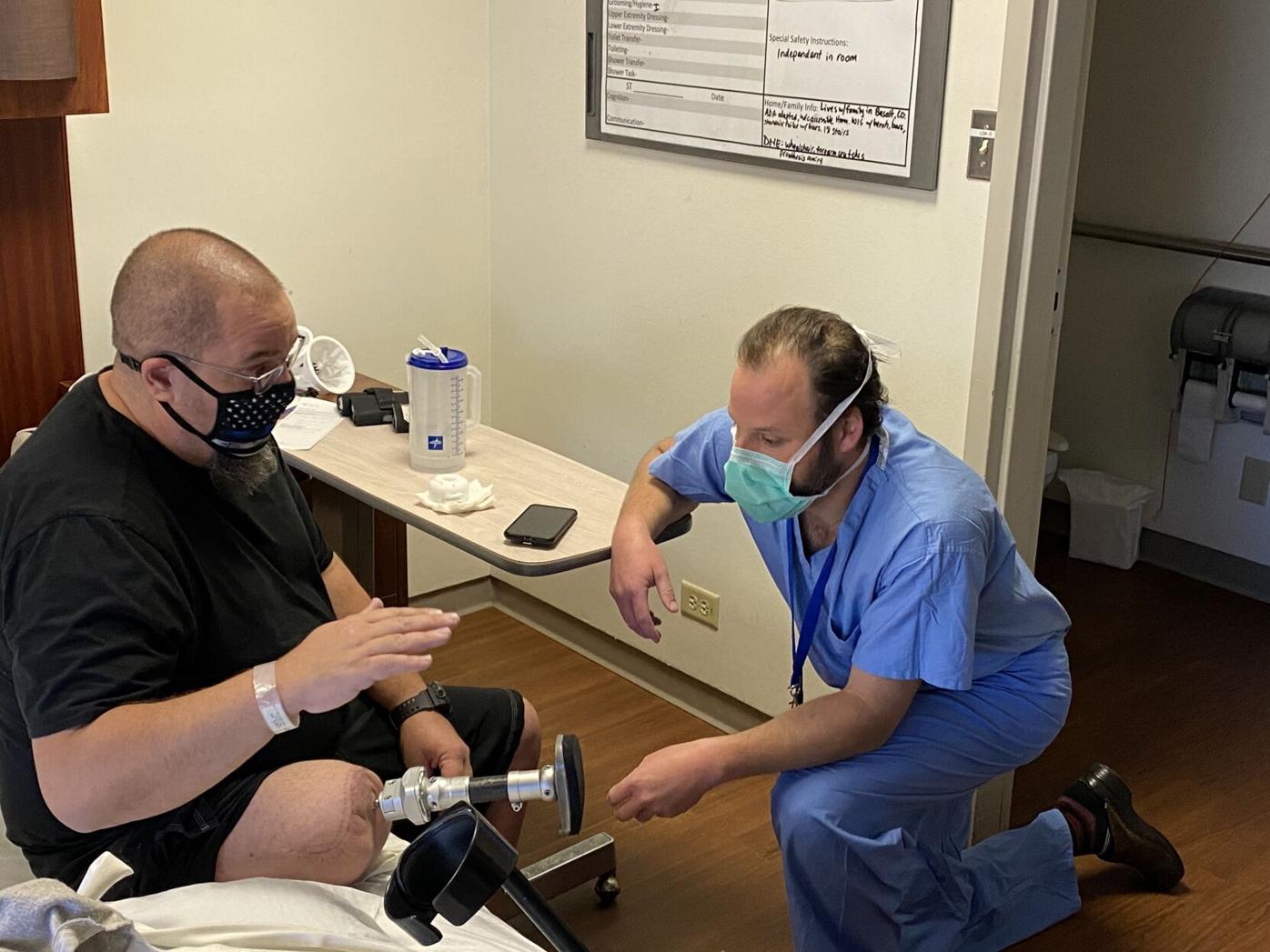 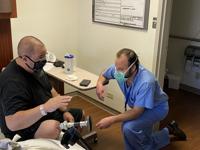 Assaf Dory and one of his doctors, Daniel Lerman, talk after Lerman and a plastic surgeon successfully placed a cutting-edge prosthetic in his thigh. 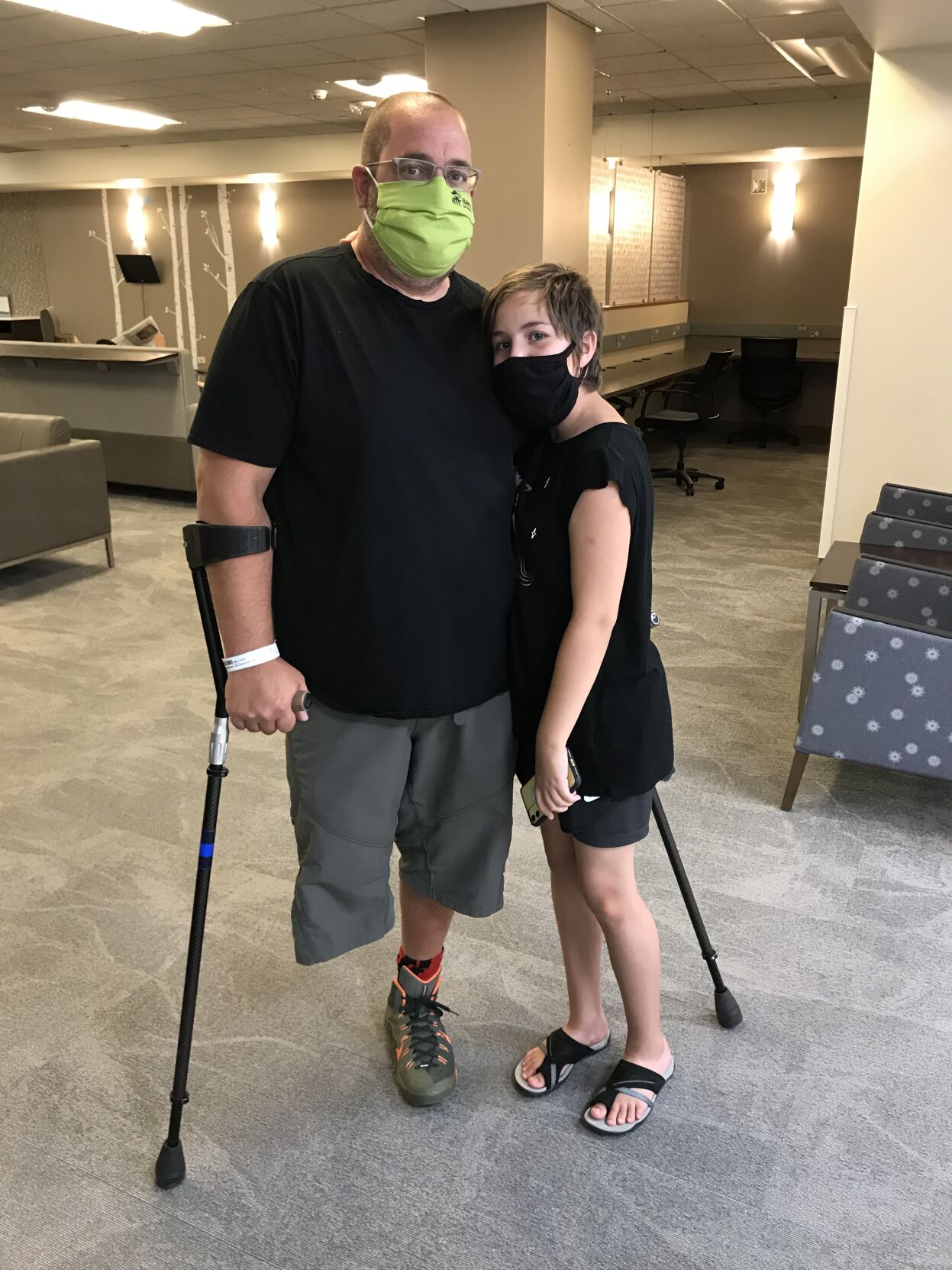 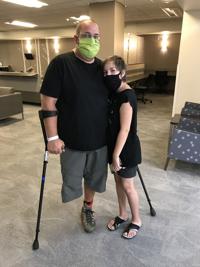 Assaf and Mechal Dory pose during a trip to Presbyterian St. Luke's, where a team of surgeons and providers have placed a cutting-edge prosthetic into Assaf's thigh.

Assaf Dory and his daughter Mechal walk together as one of Assaf's providers looks on. After receiving a cutting-edge prosthetic, Assaf wanted to walk hand in hand with his daughter.

Assaf Dory tests how much weight he can hold on his new prosthetic. Doctors have kept him on a strict rehab regimen to ensure he recovers properly.

Assaf Dory and one of his doctors, Daniel Lerman, talk after Lerman and a plastic surgeon successfully placed a cutting-edge prosthetic in his thigh.

Assaf and Mechal Dory pose during a trip to Presbyterian St. Luke's, where a team of surgeons and providers have placed a cutting-edge prosthetic into Assaf's thigh.

There's Scott Gilbert, whose local Habitat For Humanity chapter built Assaf's house. The toilets are raised, the steps are closer together, Assaf can get around in his wheelchair, the shower has a bench. Once the place was done, Assaf sat in there for 45 minutes, the longest shower since at least his accident.

Then there's Steven Fotion, the gym owner and champion strongman who's trained Assaf to participate in those strength competitions. Mechal, Assaf's daughter, calls Steven her second dad. Despite the indescribable pain radiating from his back and the spot above his right knee where his leg ends, Assaf's found the weights motivate him to keep going, even if he can't move for days afterward. He'll tell himself that he can quit, that he can give it up, but only tomorrow. And every day has a new tomorrow.

Of course, there are the physicians -- plastic surgeon David Schnur, neurosurgeon Giancarlo Barolat-Romana and orthopedic oncologist Daniel Lerman, to name a few -- who gave him the closest thing to a replacement leg that medicine has to offer. He was among of the first handful of civilians in America to face the months-long process of sewing together body and prosthetic, a procedure given the appropriately sci-fi name of osseointegration.

Assaf even finds a way to be grateful for the worker's compensation provider back in Florida, from his days as a sheriff's deputy in the St. Petersburg area. They'd fought bitterly to block the treatment, but Assaf and his providers eventually won out.

The prosthetic has changed his life. He's been hobbled to varying degrees since he broke his leg as a deputy almost 20 years ago. The trauma he suffered, and the repeated attempts to address it, then led to the development of a rare, and exceedingly painful, nerve condition. It's so painful and treatment so limited that the illness, complex regional pain syndrome, has been nicknamed the "suicide disease," Assaf said. Lerman said he's never seen Assaf in pants because it hurts too much. When Assaf hikes his shorts over his thigh, you can see the muscle twitching and rolling beneath the skin.

At one point, before his first amputation in 2010, Assaf had even asked to have the lower half of his right leg removed because of the pain and the continued complications mending it. The providers he saw previously hung on until 2010, when they amputated starting above the knee. A complication from that led to another surgery and further amputation.

Assaf is a fighter and an optimist, a veteran of the Israeli Defense Forces who emigrated to the U.S. and became an EMT after serving in the First Gulf War. He has two mantras: Be the reason people believe there's good in the world, and do good without expecting a reward.

Being an EMT in Miami was overwhelming, 23 trauma responses in 24 hour periods, and he felt he wasn't doing anything to change the violence. So he became a sheriff's deputy, and his goal was to see more neighborhood kids playing outside.

After his injury, he was told he wouldn't walk again. Six months later and he was back at full duty in the sheriff's office. But the surgeries kept coming -- more than 40 as of Wednesday -- culminating in the amputation. His family planned to move to southern Oregon, but got flagged down by friends in the Roaring Fork area, on Colorado's western slope.

The family went shopping for groceries and were so financially strapped that they were counting pennies for their food. A man approached Assaf, who was in his wheelchair, and asked how he got hurt. Assaf told him, and the man shook his hand and thanked him. When the family went to pay, they were told someone had already covered their bill.

Back in Florida, a man had walked up to Assaf and asked him the same question. But when Assaf told him, the stranger said, "Good."

Assaf didn't want to go back to Florida, and now he didn't want to go to Oregon. He wanted to stay here, in Basalt and in Colorado, where neighbors shovel his driveway when he's in surgery, where he's developed more friendships than at any point in Florida, where a handful of doctors gave him his life back.

He was initially hesitant about the procedure. Two things swayed him. First, his success at strongman competitions drove him forward and fed his motivation. The second reason is a natural, if largely unknown, byproduct of chronic, relentless pain and the medicinal merry-go-round that tries in vain to abate it: It wears you down, body and spirit. His relationship with his daughter, whom he calls popcake, suffered; he "was so frustrated with myself" that he yelled at her, an altercation that ended with both of them crying.

He went under first in June, when Lerman and Schnur teamed up to insert a metal rod up into Assaf's femur. On the x-ray, it looks like a long pipe in a thin sock.

The "real magic," Lerman said, is what Schnur, the plastic surgeon, is able to do. The end of the rod juts directly out of the end of Assaf's thigh, where the prosthetic attaches. Schnur successfully maneuvered the tissue so that it would heal safely and not get infected.

There are overall benefits and Assaf-specific benefits. Overall, patients with this type of device can feel the earth beneath them. Rather than feel like their leg is asleep or floating, which affects how amputees walk, Assaf can feel the earth because the rod is attached directly into his leg. It's not a sleeve pulled over his stump (he has a tattoo on his left leg that says "I'm with stumpy," with an arrow pointing to the right), which gives less maneuverability and less sensation.

That's the general reason. For Assaf, he couldn't tolerate the alternatives; his pain condition made it agonizing for him to slip on the sleeve over his leg and fit his more primitive prosthetic. He had to use crutches or a wheelchair, "out of the game," he said.

In September, the doctors placed the small connecting piece that would attach the prosthetic to the rod. When he stood up for the first time, the pain was immense. But that's not why he cried. He was standing upright and could feel the world beneath him.

Now Assaf's working on building the muscle and bone back up, under the watchful eye of his battery of doctors, a physical therapist and a prosthetics specialist.

Sometimes he widens that watchful eye. He posted a video to his instagram (his account is iamstumpy) of him powering through a workout on one of those exercise bikes with the tall, bobbing handles. Someone with the prosthetic company got nervous and asked Lerman if Assaf was overdoing it.

He shouts-out the doctors and the hospital -- Presbyterian St. Luke's -- as having saved his life. He's in some amputee support groups, and he's been telling all of them they should get this procedure done.

As he gets used to the prosthetic and the doctors work to limit the nerve pain, Assaf's got some plans. He and Mechal will go to Israel this summer for her bat mitzvah, then they'll take a road trip in the States. Now that he's got mobility, he plans to use it.

He wants to volunteer more. Somehow, he's already active on that front. He's teamed up with a local doctor to help combat loneliness in rural Colorado. He works with disabled American veterans, taking one bunch to Israel to talk to soldiers there.

But his first immediate goal was to walk by Mechal and hold her hand. She was born around the time when he lost his leg. They spent the first 18 months of her life on the floor together, and he found purpose.

"Just be a father, a better father," he said of his goals. "A caretaker."

When was the last time he yelled at her, he asked. Mechal looked up from her phone, up at the ceiling and thought.

Crutches or the wheelchair have stopped him from holding her hand as they walked. But on Wednesday, as a TV camera and hospital PR people watched, he took Mechal's hand and they walked into the elevator and then into a doctor's office.

As they left his last appointment of the day, the TV reporters wanted a shot of Mechal and Assaf walking. Mechal had been reticent of the media who'd followed them through their day, but he wanted her to join him.