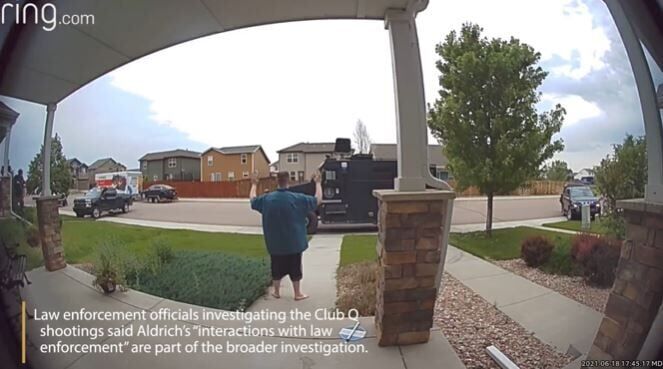 Anderson Lee Aldrich is believed to have live-streamed a 2021 bomb threat incident on Facebook. The owner of the home provided a recording of the video. She said Laura Voepel, Aldrich's mom, had rented a spare room from her for “a little over a year” before the bomb threat occurred. 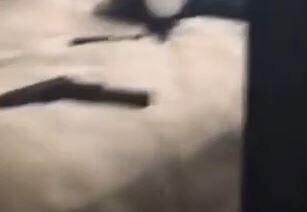 Anderson Lee Aldrich is believed to have live-streamed a 2021 bomb threat incident on Facebook, capturing what appears to be multiple weapons within the home. Here, a screenshot of the video shows what appears to be a handgun laying on the bed.

Video footage obtained by The Gazette Monday sheds more light on the circumstances surrounding a June 2021 bomb threat incident in which Anderson Lee Aldrich, identified by police as the Club Q shooting suspect, captures himself possessing multiple weapons while threatening to blow a home “to holy hell.”

The man’s mother, Laura Voepel, reported the bomb threat to law enforcement, saying her son had made threats from within the house shown in the video with a homemade bomb, several weapons and ammunition, El Paso County Sheriff’s Office spokeswoman Deborah Mynatt said in a press release at the time.

Deputies arrested Aldrich after a multi-hour standoff that forced residents in a Lorson Ranch neighborhood in southeast Colorado Springs to evacuate from their homes for about three hours, the press release said.

The Sheriff's Office said the then-21-year-old man was accused of two counts of felony menacing and three counts of first-degree kidnapping. But no formal charges were pursued in the case, which has since been sealed, the 4th Judicial District Attorney's Office told The Gazette.

Howard Black, spokesman for the District Attorney's Office, said last year's incident will be part of the investigation of Saturday’s mass shooting.

In the video, a man believed to be Aldrich is seen wearing body armor and a helmet while toting what appears to be a rifle between rooms. What appears to be a handgun on the bed comes into view as Aldrich directs expletives at deputies outside the home.

“If they breach, I’ma f***ing blow it to holy hell,” Aldrich can be heard saying about law enforcement. “Go ahead and come on in, boys. Let’s f***ing see it.”

The owner of the home provided a recording of the video, which Aldrich seems to have livestreamed from his mother's Facebook account. She said Voepel had rented a spare room from her for “a little over a year” before the bomb threat occurred. Public records show that the homeowner’s address is consistent with the address provided by the Sheriff’s Office last year.

Relatives who wished not to be identified said that the incident started when Aldrich found out that his maternal grandparents, with whom Aldrich lived at a nearby address, were going to move from Colorado to Florida. In a separate neighborhood doorbell surveillance video, Aldrich can be seen carrying a black suitcase into the home just hours before Voepel reported the threat.

"This is the day I die," he can be heard telling his mother. "They don't give a f*** about me anymore. Clearly."

The relative also confirmed Voepel to be the woman shown in the surveillance video.

What is Colorado’s red flag law?

The bomb threat has re-emerged as a point of contention in the aftermath of Saturday’s shooting, and the video could amplify questions about why no charges were filed and why Colorado's "red-flag" law didn't come into play in Aldrich's case. The statute allows law enforcement officers or private citizens to petition a county court to confiscate firearms temporarily from people who pose an imminent threat to themselves or others.

Though the June 2021 press release said an explosives unit cleared the home and “did not find any explosive devices,” the video appears to confirm that firearms were present during the incident and indicates that Aldrich was threatening other people as well as law enforcement officers.

In a press conference Monday, law enforcement officials cautioned media against assuming that Colorado's red-flag law would have applied in any previous encounters Aldrich may have had with authorities.

On Monday, a joint operation between police and the city of Colorado Springs confirmed five fatalities, and 17 people sustained gunshot wounds, another person injured in another manner and one victim with no visible injuries but considered a victim, city spokesman Max D'Onofrio said.

The charges filed against Aldrich are subject to change, and additional charges may be added, prior to his first appearance in Colorado's 4th Judicial District Court. Aldrich is currently hospitalized and thus, no court dates have been set.

Club Q suspect's mother had a past of her own

The mother of Anderson Lee Aldrich, the suspect in the Club Q shooting, has three outstanding warrants for her arrest out of California and an…