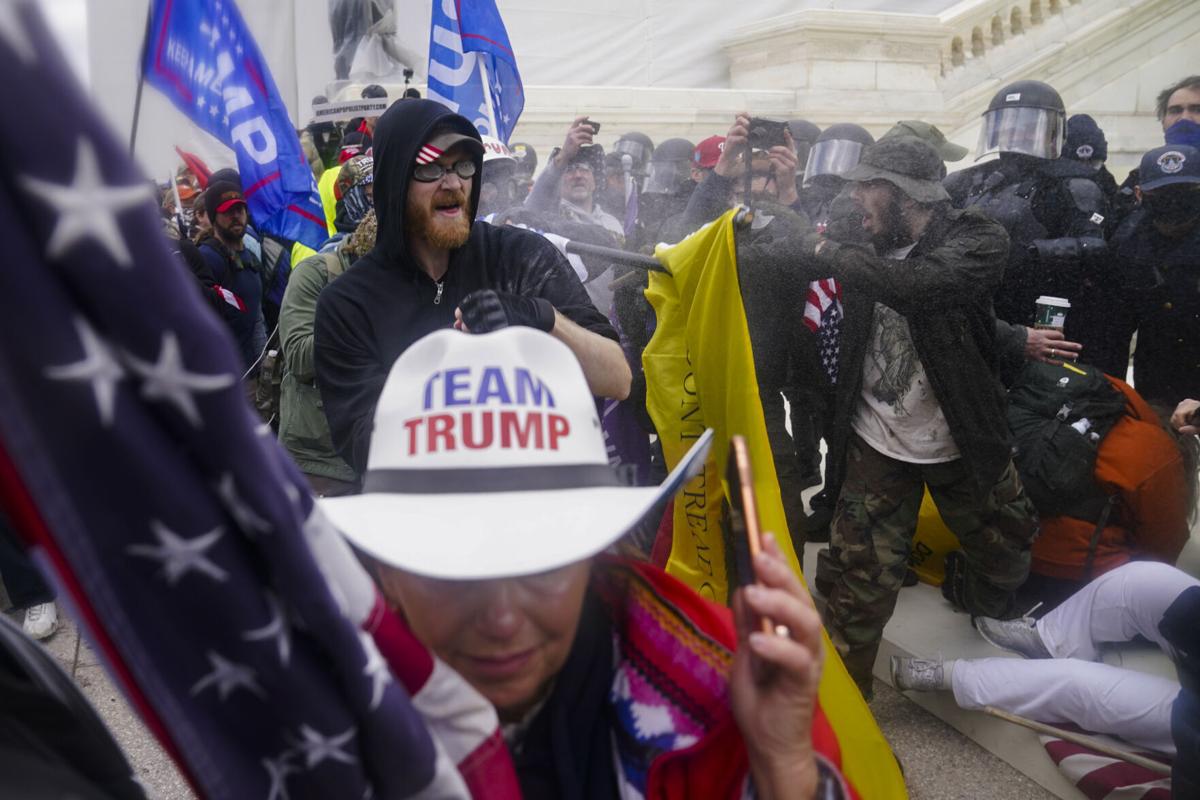 Trump supporters try to break through a police barrier, Wednesday, Jan. 6, 2021, at the Capitol in Washington. As Congress prepared to affirm President-elect Joe Biden's victory, thousands of people gathered to show their support for President Donald Trump and his claims of election fraud. 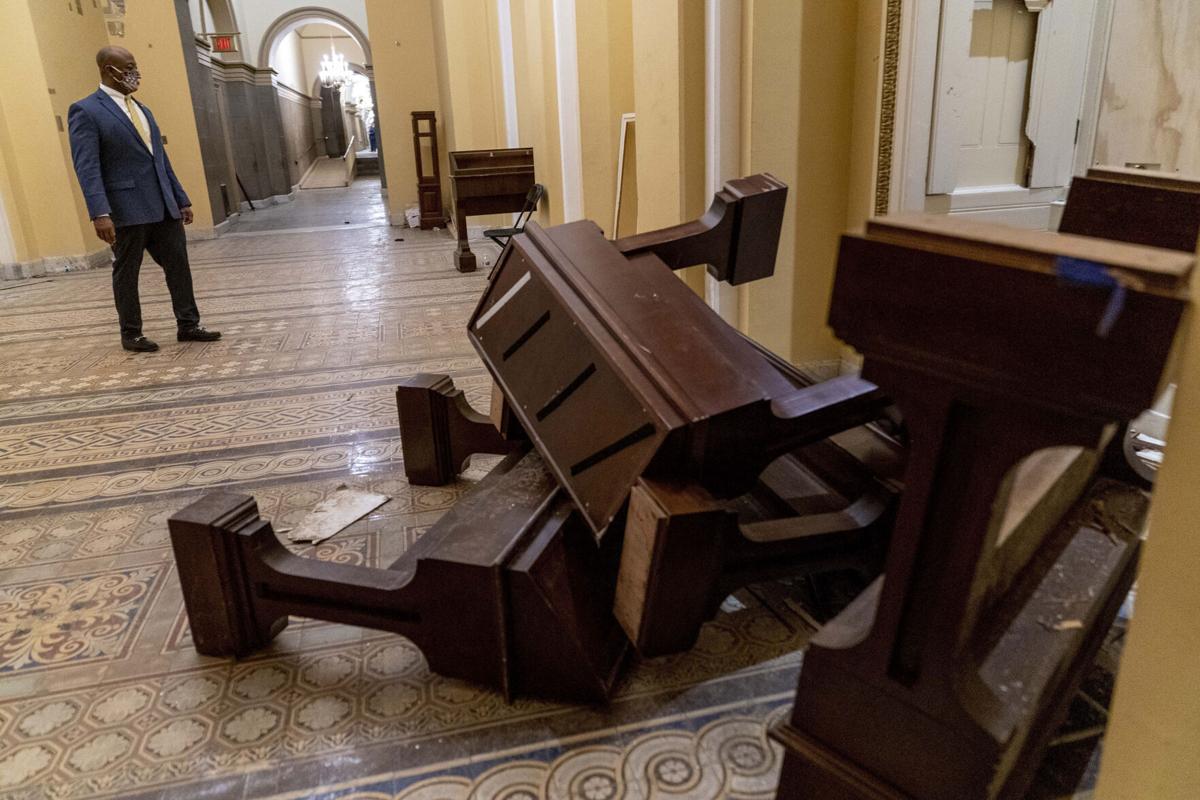 Sen. Tim Scott, R-S.C., stops to look at damage in the early morning hours of Thursday, Jan. 7, 2021, after protesters stormed the Capitol in Washington, on Wednesday.

Trump supporters try to break through a police barrier, Wednesday, Jan. 6, 2021, at the Capitol in Washington. As Congress prepared to affirm President-elect Joe Biden's victory, thousands of people gathered to show their support for President Donald Trump and his claims of election fraud.

Sen. Tim Scott, R-S.C., stops to look at damage in the early morning hours of Thursday, Jan. 7, 2021, after protesters stormed the Capitol in Washington, on Wednesday.

Tyler Ethridge, a 2017 graduate of the Practical Government School at Andrew Wommack's Charis Bible College, was among the crowd of Trump supporters who illegally entered the Capitol, filming himself amid the chaos and posting his video on Parler.

“Just to let you know, I’m not involved in this,” he says in a video  he shot from inside the Capitol. “I’m just observing … I don’t want to say that what we’re doing is right. But if the election is being stolen, what is it going to take?”

In his video, Ethridge, who worked as a youth pastor at a Florida church led by a fellow former Charis student, said, “I’m probably going to lose my job as a pastor after this.”

🎥 In Parler video, this Capitol terrorist declared, “I’m probably going to lose my job as a pastor after this.”#PastorParler pic.twitter.com/SqOzuE9kCs

He was right. Christ-Centered Church of Tampa, a congregation in Dover, Fla., announced on Jan. 19 that Ethridge no longer worked there.

In a Jan. 21 statement, Charis said it had “become aware that an alumnus was present in Washington D.C. on January 6th to attend the Trump Rally,” but did not name Ethridge or acknowledge that he was inside the Capitol.

“Although the Ministry vigorously supports every citizen’s right to free speech and peaceful assembly, we adamantly oppose the violence or other violations of the law that occurred. In addition, we do not condone or teach insurrectionist practices in our School of Practical Government, but instead we encourage graduates to live out their faith as active and responsible citizens.”

Another Coloradan arrested in connection with Jan. 6 Capitol riot

Wommack, a health-and-wealth preacher who oversees a broadcast ministry and related entities that raised $68 million in 2019, has described liberals as crazy, malicious, evil, and demon-possessed.

Both Truth & Liberty Coalition and Wommack’s Practical Government School were co-founded by GOP consultant and Christian nationalist David Barton. In a Jan. 7 broadcast produced by his ministry, Wallbuilders, Barton blamed the Capitol attack on members of Antifa and Black Lives Matter, and said Capitol Police were mysteriously ordered to stand down, allowing the attackers to enter the Capitol.

“There’s no question that a lot of naïve kind of lambs followed them in once they got there,” said Barton. “And there’s also no question there’s a video of the Capitol Police actually opening doors, pulling down barricades and then letting people come in. Now, that is the craziest thing ever … somebody told them to stand down somewhere. Because there’s no way you get into that federal building with the ease with which that group broke into it.”

Ethridge was a star football player for the Coyotes of Richland Springs High School in central Texas, where his 10,000 yards passing yards in the 2008 season set a record that still stands for six-man teams.

In a Twitter post, Ethridge doubled down on his innocence, and issued a warning to any tempted to go after him.

“I reported myself to the FBI to prove I have nothing to hide. ... I will use every source out there as evidence if anyone incites violence against me and my family.” Ethridge posted to Twitter.

Other pastors from across the U.S. participated in Trump’s rally that preceded the Capitol attack, but none other than Ethridge appear to have illegally entered the Capitol.

Tommy Ferrell, who served as lead pastor of Briarlake Church in Decatur, Georgia, announced he would be moving on from that 2,300-member Southern Baptist congregation. In a sermon, Ferrell said of the Capitol attackers, “There’s some good people in there. There’s some bad people in there.” Ferrell’s claims that Joe Biden’s election was fraudulent raised consternation in predominantly-blue DeKalb County, where Briarlake Church serves as a polling location.

Steve Berger, founder of Grace Chapel in Franklin, Tenn., attended the Jan. 6 rally in D.C. and on Jan. 17 he announced he is stepping away as senior pastor of the church, which is attended by the state's governor Bill Lee.

Brian Gibson, pastor of HIS Church, a multi-campus church in Owensboro, Ken., who has preached about election fraud and posted a picture on his Facebook feed with the “QAnon Shaman,” attended the Jan. 6 rally. In an article published in Newsweek, which is now owned by associates of controversial Korean Christian leader David Jang, Gibson said liberals would use false reports of Christian insurrectionists to persecute believers.

"Absolutely, 100 percent, they'll go after Christians for this," said Gibson in the article, which also quoted Jeff Myers, president of Summit Ministries in Manitou Springs.

“It's very easy to find the worst of your opponents and position them as if they characterize the whole group,” Myers said. “I'll be very curious to see when the FBI starts indicting people how many are chosen for their Christian convictions."

Evangelical leaders nationwide disagree about who or what caused the Capitol attack. James Dobson launched his pro-family career with his 1970 book, Dare to Discipline, which railed against “cataclysmic social upheaval” caused by people who lack respect for authority, law and order. He hasn’t publicly commented on the Jan. 6 attack.

Dobson, who founded Focus on the Family in 1977, and now leads the James Dobson Family Institute, told his supporters in recent letters that the outcome of presidential election remains “unresolved” because of the Supreme Court’s “failure to do its duty” concerning “the overwhelming volume of evidence” supporting claims of election fraud. Dobson, a Trump advisor, also told supporters that President Joe Biden is orchestrating a “coup” through his “radical executive orders.”

Colorado hits goal of vaccinating 70% of residents 70 and up

DENVER (AP) — Colorado has hit its goal to vaccinate 70% of residents 70 and older by the end of February, Gov. Jared Polis announced Tuesday.

DENVER (AP) — Colorado lawmakers heard from Second Amendment advocates and gun violence activists on a bill that would require firearms to be safely stored when they are not in use to keep them away from children and others who shouldn't have access.

DENVER (AP) _ Intrepid Potash Inc. (IPI) on Monday reported a fourth-quarter loss of $711,000, after reporting a profit in the same period a year earlier.