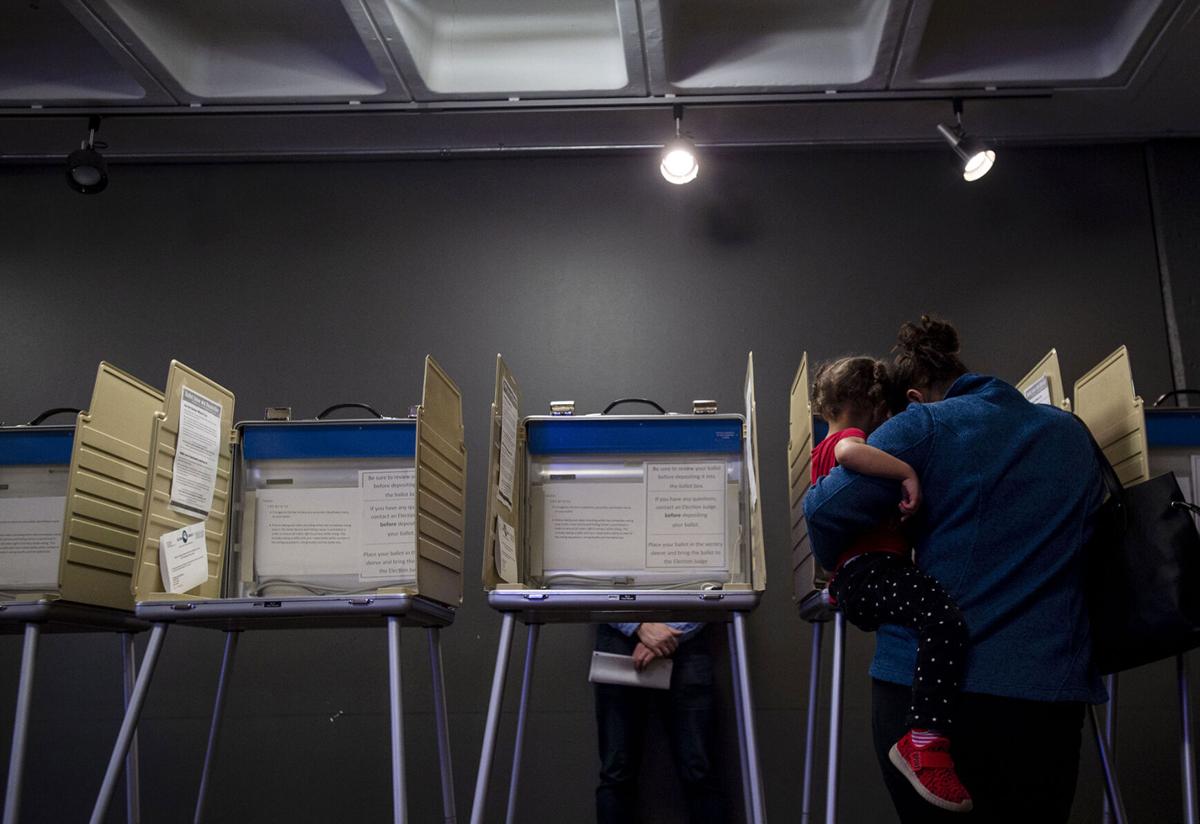 Cristina Bundukamara holds her daughter Eridanus, 2, as she marks her ballot for the 2020 Presidential Primary Election at a voting station at the El Paso County Clerk's Office downtown branch in Colorado Springs, Colo., on Tuesday, March 3, 2020. (Chancey Bush/ The Gazette)

Colorado voters support a statewide ballot question to create a paid family and medical leave program but are evenly split on two measures to outlaw abortions after 22 weeks and to award the state's electoral votes to the winner of the national popular vote, a poll released Thursday by Colorado Politics and 9News shows.

The poll, conducted Oct. 1-6 by Survey USA, also found a vast majority of likely voters remain undecided just days before ballots go out about a measure to repeal the Gallagher Amendment, which would change the way property taxes are calculated.

The pollsters interviewed 1,021 likely Colorado voters and weighted responses by demographics according to U.S. Census data. The questions have a credibility interval of plus-or-minus 3.9 percentage points.

Proposition 118, which would establish a payroll tax-funded insurance program offering up to 12 weeks of paid leave for medical or family reasons, appears positioned to pass in November, with 57% of respondents saying they'll vote for it and just 21% saying they're opposed. Another 22% aren't certain.

The measure, which has repeatedly failed to garner sufficient support from legislators, is backed by double-digit margins by men and women of all ages, income groups and education levels in every region of the state, the poll found. Even Republicans are evenly split on the question with 38% in support and 37% opposed.

Voters are narrowly divided, however, on Proposition 115, which would ban abortion after 22 weeks gestation except to save the life of the pregnant woman.

For decades, Colorado voters have rejected ballot measures seeking to restrict access to abortion, but 42% of likely voters support this year's attempt and 45% are opposed, with 13% unsure. Republicans support the measure by a 40-percentage-point margin, 63% to 23%, while Democrats oppose it 60% to 28% and independent voters say they'll vote no, 51% to 35%.

The survey found a mirror-image gender gap among suburban voters, with 47% of suburban men supporting the measure and 38% opposed, while 47% of suburban women oppose it and 39% support the ban.

Voters are also split over Proposition 113, which would join Colorado to an interstate compact that agrees to award the states' electoral votes for president to the winner of the national popular vote. It wouldn't take effect until enough states sign on to total the number of electoral votes required to elect a president.

Amendment B, which would repeal the Gallagher Amendment and its requirement that residential property makes up 45% of property tax collections, appears to be a mystery to voters, with 61% saying they aren't certain how they'll vote. Of those who have made up their minds, 22% would vote yes and 17% would vote no.

"Any outcome is possible," the pollsters said. 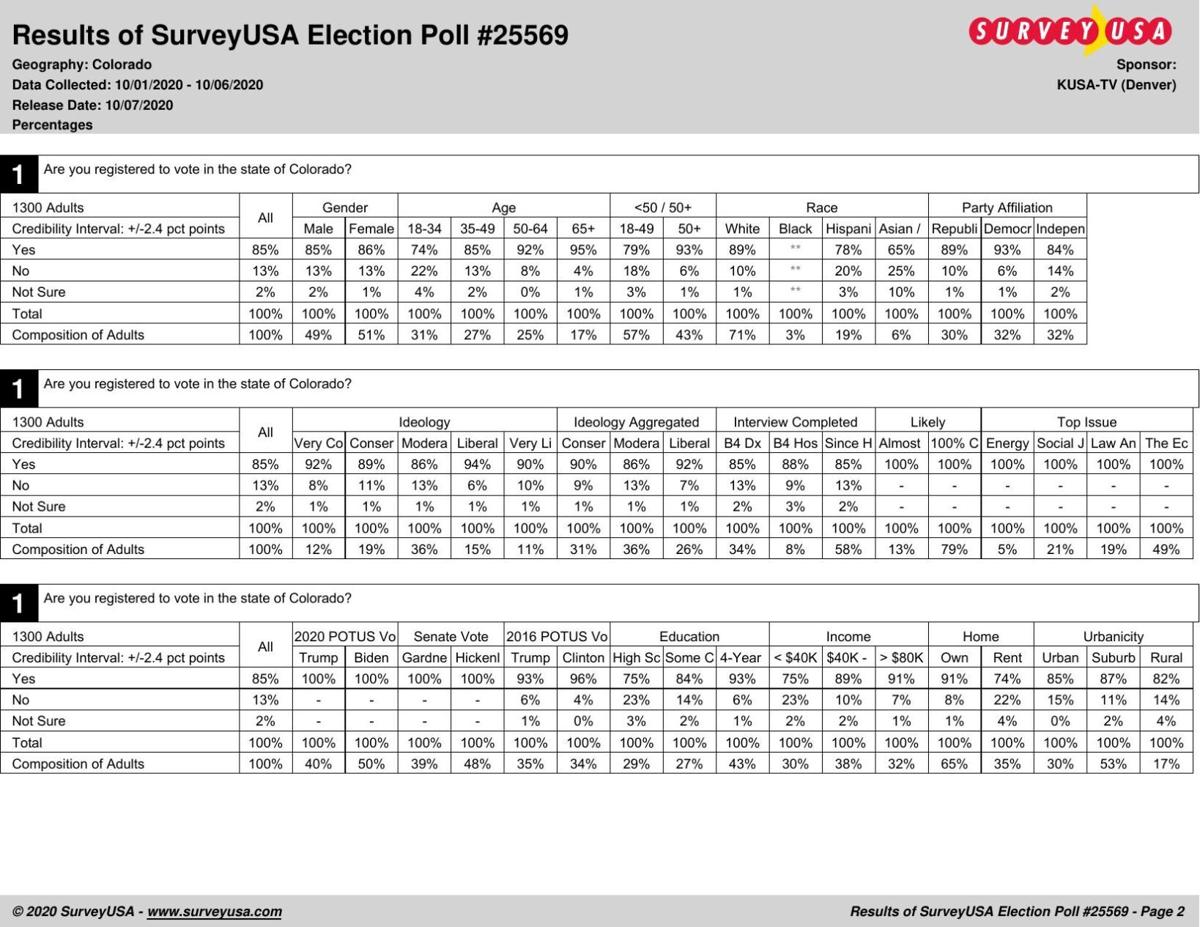 "Every Coloradan deserves to be heard when we elect a president," the Democratic governor said in a statement released by the committee backing the measure.

A Colorado jury on Thursday convicted a man in the killing of a sheriff's deputy in 2018.

DENVER (AP) _ SM Energy Co. (SM) on Thursday reported a third-quarter loss of $98.3 million, after reporting a profit in the same period a year earlier.

DENVER (AP) — A small portion of the newest state park in Colorado is scheduled to open beginning this weekend.

No reduced bond for TV station guard charged with murder

DENVER (AP) — A judge has declined to lower bond for a television station security guard charged with second-degree murder in the shooting of a pro-police demonstrator following opposing protests this month in downtown Denver.

DENVER (AP) — A coalition of anti-hunger groups in Denver have been removing letters from President Donald Trump from inside federal food assistance boxes that address recipient families.