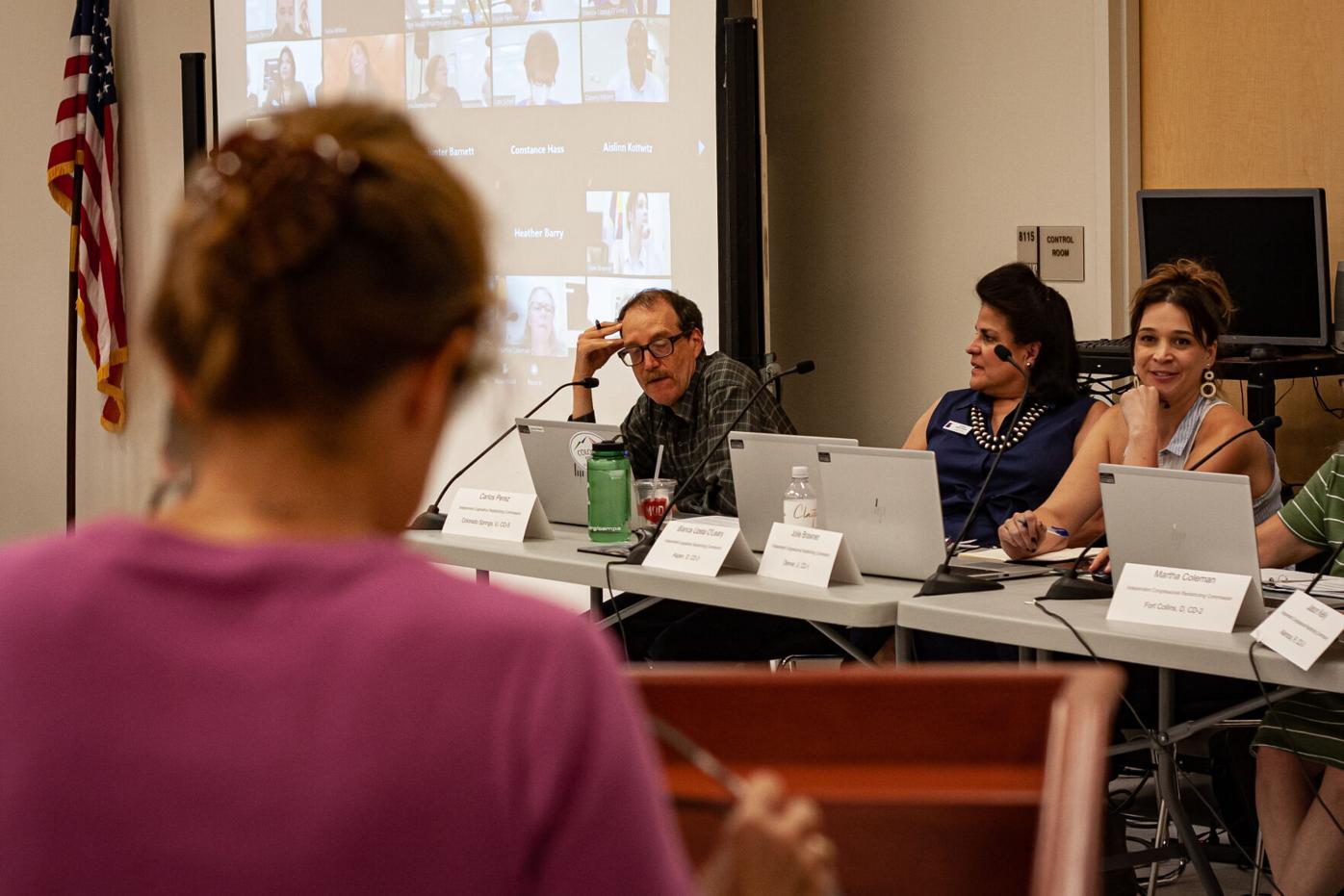 Gazette file Redistricting commissioners discuss suggested changes to preliminary draft maps with members from the public in July in Arvada. 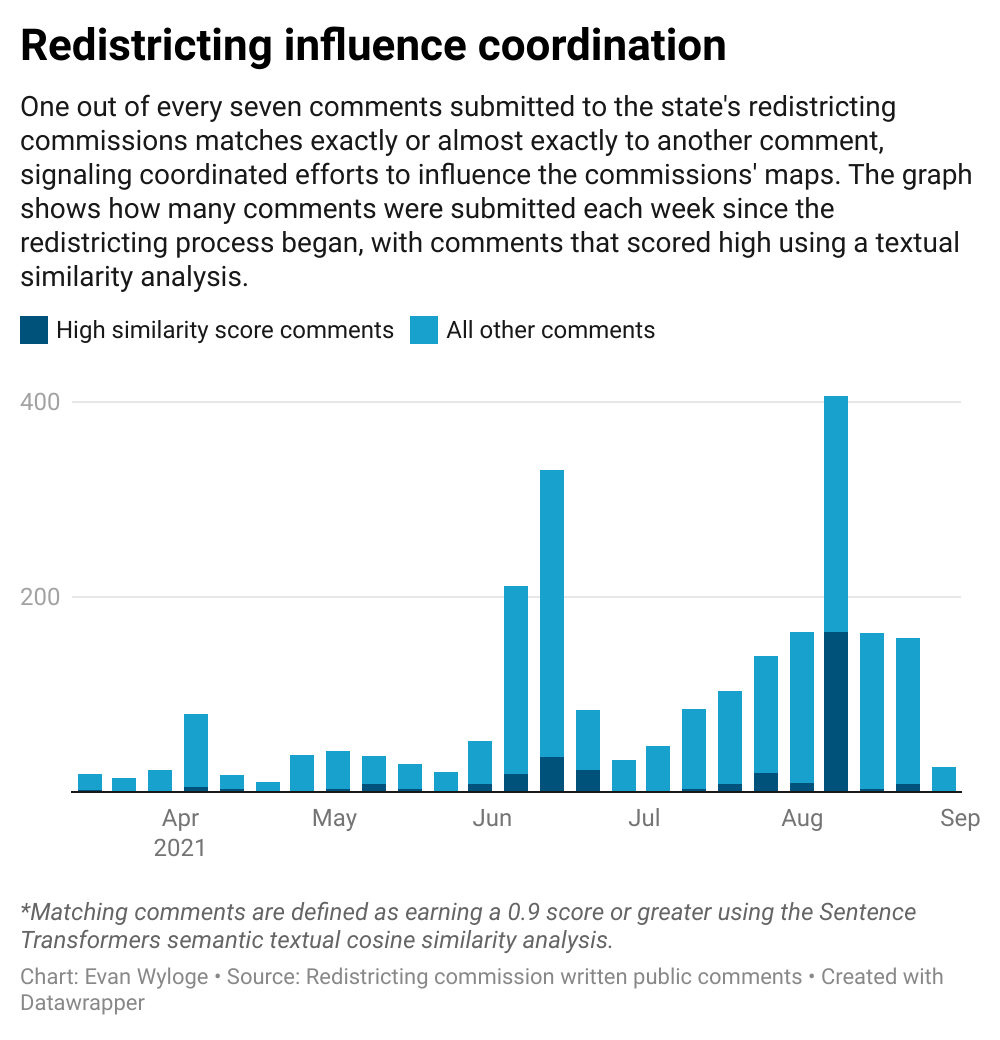 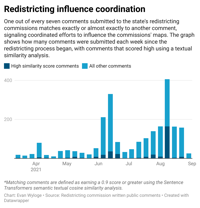 Gazette file Redistricting commissioners discuss suggested changes to preliminary draft maps with members from the public in July in Arvada.

Around 2,400 Coloradans have used the redistricting commissions' online comment submission portal, some to advocate for keeping apart areas of the state because of diverging interests. Others have argued that specific areas need to be kept whole in order to ensure their shared interests aren’t splintered.

The comments also come with a presumption that they represent the individual thoughts of those who clicked the “submit” button. But a Gazette analysis shows that about one out of every seven comments — more than 300 — share identical or nearly identical language with other comments.

The closely matching comments reveal efforts to sway the commissions by the volume of recommendations for the same action, without mention of the coordination that led to them. This echoes other examples unearthed by The Gazette to influence the commission without fully disclosing where recommendations are originating.

In June, a prominent Democratic political consulting firm retroactively registered their efforts to lobby the commissioners after an employee coached public testimony from someone claiming to represent only themselves. In July an incumbent lawmaker instructed supporters how to recommend favorable maps for him and other incumbent Republicans, but without specifically telling commissioners that was the goal.

In August, the Colorado Farm Bureau suggested legislative maps to the commissioners, saying that only their staff had worked on the maps, despite having help from a secretly funded nonprofit organization that pays longtime Republican operatives to work on redistricting issues.

The Gazette analysis of public comment submissions relied on emerging machine learning technology designed to identify semantic and textual trends within large sets of text, like what some schools now use to check student work for plagiarism.

Here’s a look at the eight clusters of comments submitted between March and August, where the individual comments share language beyond what is possible by chance:

Danny Moore served briefly as the chairman of the congressional redistricting commission, before his fellow commissioners removed him after media reports highlighted social media posts made by Moore touting election conspiracy theories. But before Moore was removed from his chairman position, several nearly identical comments were submitted, urging for him to be retained as the chairman, hailing his military and civic service.

• First week of May: Keep Larimer and Boulder counties in the same congressional district

Several comments with matching language were submitted to the commission, urging them to keep Boulder and Larimer counties in a single congressional district.

The comments all included a reference to a population of approximately 722,000 people in the two counties combined, which is close to the target number for congressional districts.

• Second week of May: Keep Berthoud in Congressional District 2

Several nearly identical comments were submitted about the town of Berthoud, between Longmont and Loveland.

“I am writing to strongly encourage the committee to keep Berthoud in Joe Neguse’s congressional district,” nearly all of them wrote. The comments argued that the area “is no longer a rural outpost and aligns more closely with Joe’s current constituency.”

The commissions are prohibited from making map decisions based on incumbent elected officials.

Berthoud’s mayor pro tem, Maureen Dower, said she wrote the comment and sent it to friends to show them what she was submitting, but that she didn’t know her friends would use her language verbatim.

“It was spontaneous and not coordinated at all,” Dower said.

Nearly exactly matching comments were submitted to the commission, all from people who said they are Steamboat Springs residents, arguing that Eagle County and Routt County should remain together, but moreover that the existing House district be left as similar as possible to how it has appeared for the past decade.

“Resort communities are facing similar problems around affordability for essential workers and low-wage earners as well as the impact of climate change and environmental issues on our wonderful community,” they all wrote.

On June 16, a group of comments were submitted to the commission, all using nearly identical language, arguing that “Lakewood shares little in common with Douglas County, and should stay in a district with Arvada and Wheat Ridge.”

The move to keep these areas together has been widely seen as a benefit for Democrats looking to keep the current Democratic lean of the Seventh Congressional District.

Dozens of nearly identical comments came into the commission’s online submission portal, each repeating several ideas, most matching verbatim to the following passage: “... the Rockies have become a natural buffer between rural and urban areas of the state. Recent happenings across the state from immunizations to voter integrity have revealed that there is a definite split in opinions on many fronts between several counties in Colorado. I recently learned about talks of trying to change the third district, by redrawing districting lines to exclude Pueblo county (sic), replacing it with Boulder, and or Breckenridge, and Vail counties. I do not have to point out the political leanings of said counties, and that this would be a disservice to each of the counties for obvious reasons.”

Breckenridge and Vail are municipalities in Summit and Eagle Counties.

One of the commenters, when reached by The Gazette, said her comment was written by someone else and sent to multiple other people to use as their own comment submission.

“I have a friend who is very active and she sent out a suggested type thing to send in, but I didn’t really like what she had, so I modified it a little bit,” she said. Her comment matched almost exactly to the others, except for an additional part near the end: “If your intent as a committee is to change the ‘color’ of the 3rd district, then you as a committee are usurping the power of the people of the 3rd district in a fascist manner and against your MANDATE to ‘preserve whole communities of interest and whole political subdivisions.’”

During the last week of July and the first week of August, several nearly identical comments came into the commissions, asking that the Wind Crest Senior Living Community in northern Douglas County be kept whole in a single legislative district, as opposed to being split as they were in the first preliminary draft legislative maps.

The largest group of matching public comments came from a form letter provided by Colorado Common Cause, a Democratic-leaning nonprofit advocacy organization, asking the commission to hold more public hearings. Around 150 of the nearly identical comments came into the commission that day.

“When Colorado voters approved Amendments Y & Z, creating the Independent Commissions, voters took redistricting out of the hands of partisan politicians and established robust public input requirements for the entire redistricting process. Public participation is a critical component to ensuring that the maps you draw are fair, equitable and prioritize communities of interest,” they all wrote.

Amanda Gonzalez, the organization’s local executive director, said that she and the organization have been careful not to organize a comment submission form around any particular mapping concepts or approaches, because the organization is registered as a redistricting lobbying organization, and doing so could run afoul of the state’s lobbying rules.

“We have very intentionally not scripted for people, telling them to go say they want the map to look like X or Y. We didn’t organize around that. Where we did feel like we could be involved is advocating for the most public input possible,” she said. “So we showed them a template and we emphasized that the commissions were doing good work by holding these meetings, and that getting more public input is better.”

The commissions’ staff said they are not doing programmatic analysis of the comments or trying to quantify where they find duplicate messages that seem to be copied-and-pasted in a coordinated way. But they’ve also said that the duplicate messages are noticeable and that they try to factor into their consideration when the comments exactly match others.

Accusations of unregistered lobbying and unreported lobbying spending have been leveled against a group of secretly-funded political operatives.

The map coming Thursday could be the state's final congressional map for a decade.

Colorado's congressional redistricting commission has released the latest in a series of new eight-district congressional map proposals, but this one could end up being the map used for the next decade.

Colorado’s inaugural independent congressional redistricting commission wrapped up its work Tuesday night and selected a final congressional map plan to use for the next decade.