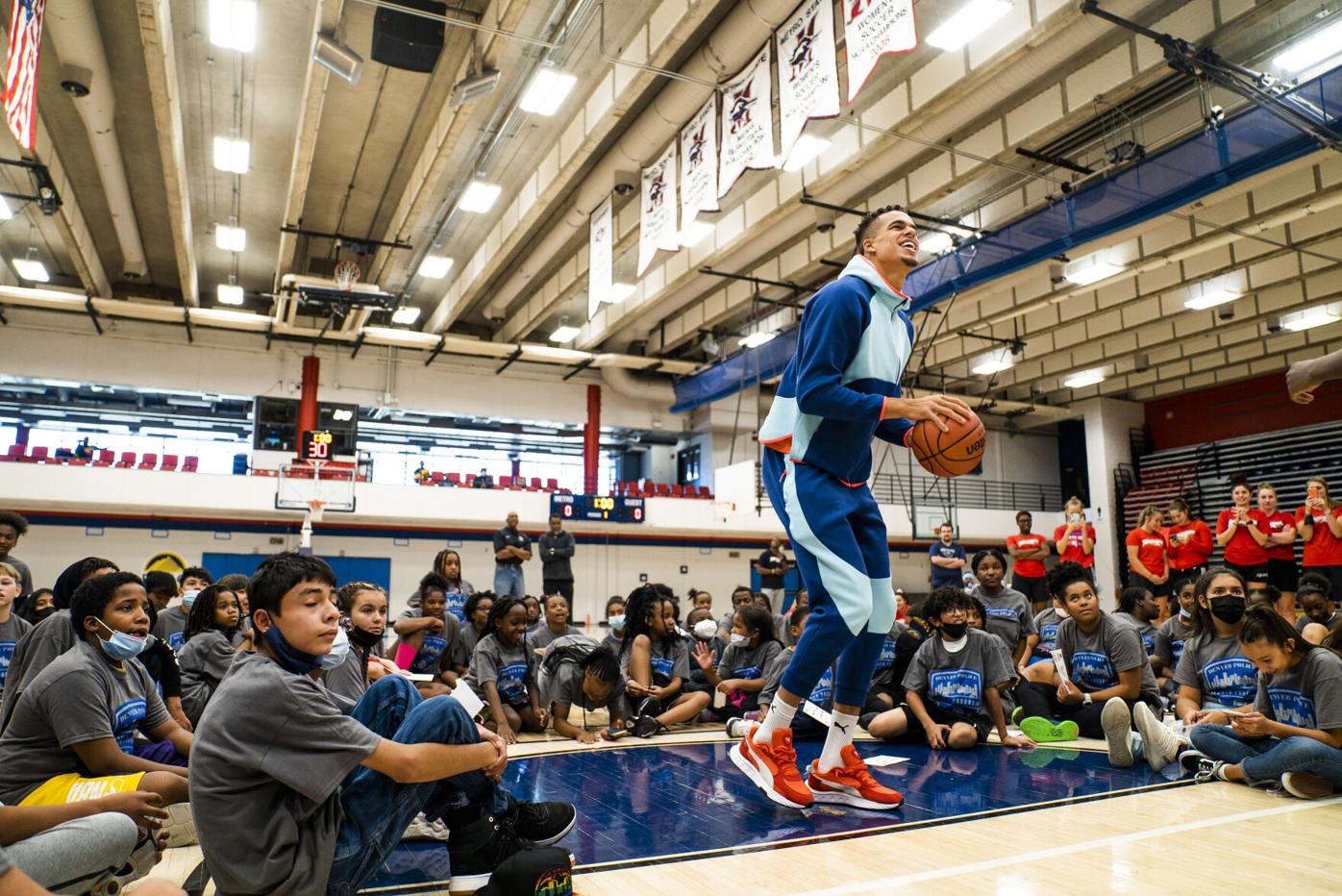 Michael Porter Jr. of the Denver Nuggets plays a game of ‘knock out’ with Denver youth during the ‘Hoop 4 Safety’ basketball clinic at Metropolitan State University of Denver on Saturday, September 25, 2021. Members of the Metropolitan State University of Denver women’s and men’s basketball teams helped kids with their basketball skills. The Denver Police Department hosted the event. (Photo by Katie Klann/Denver Gazette) 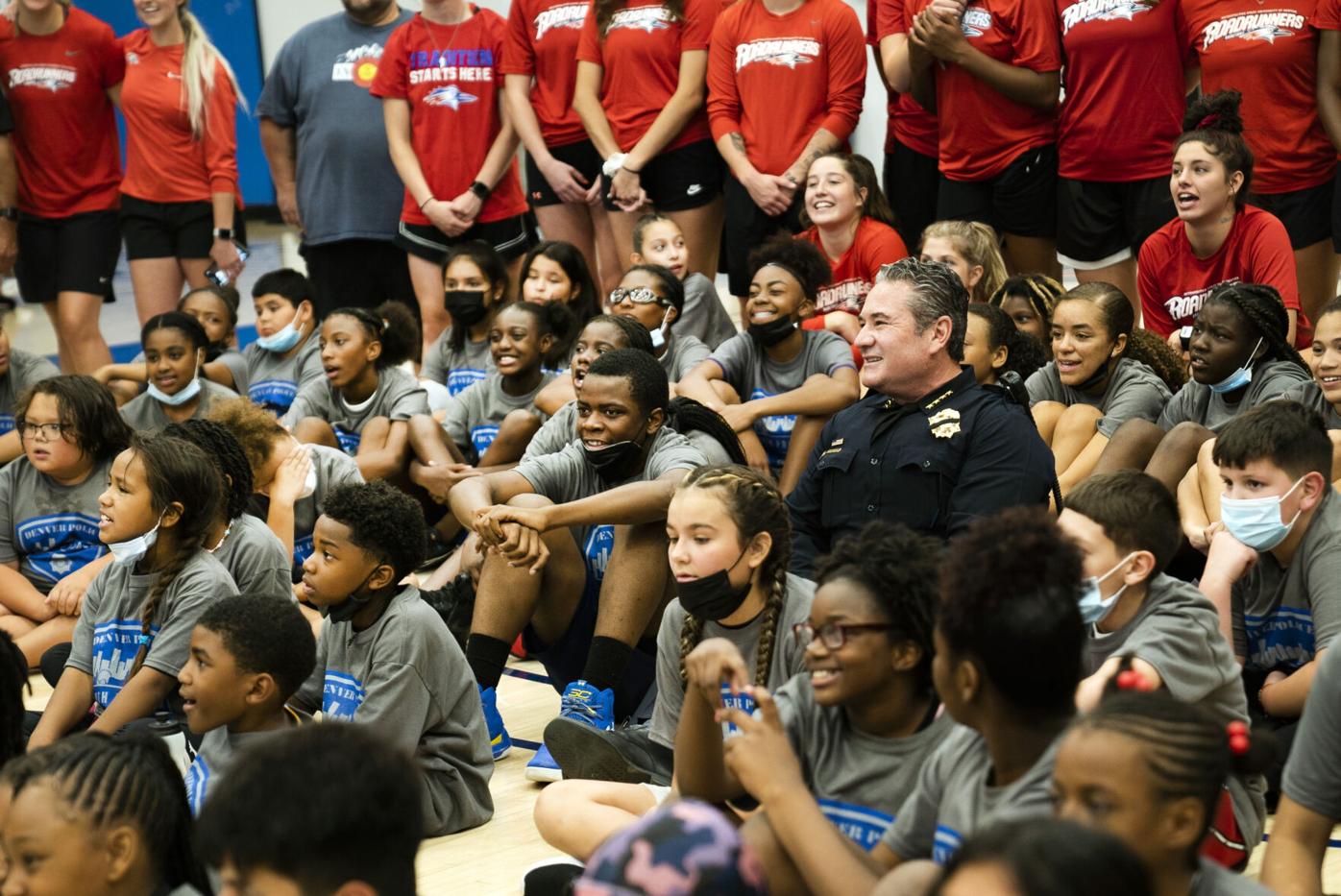 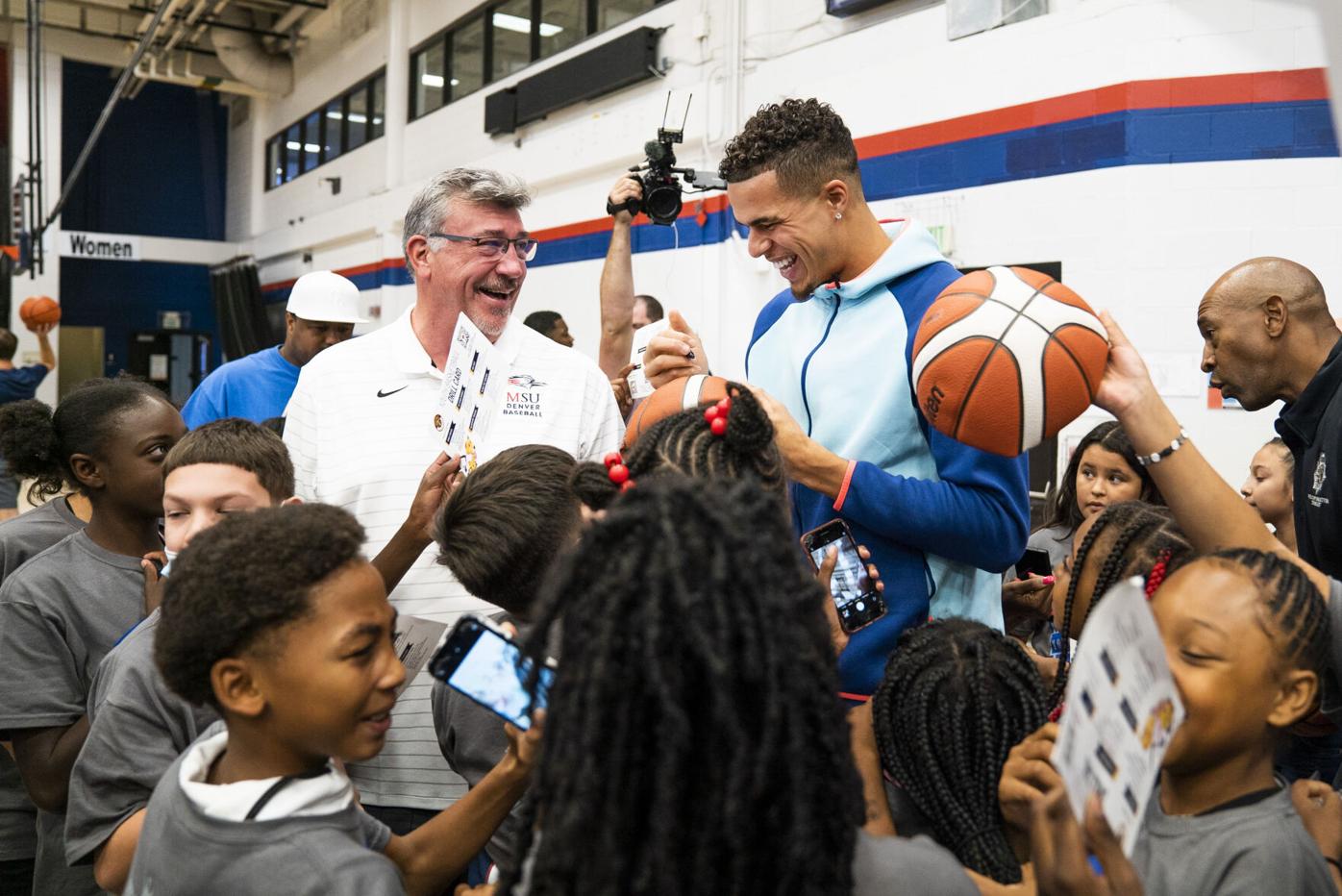 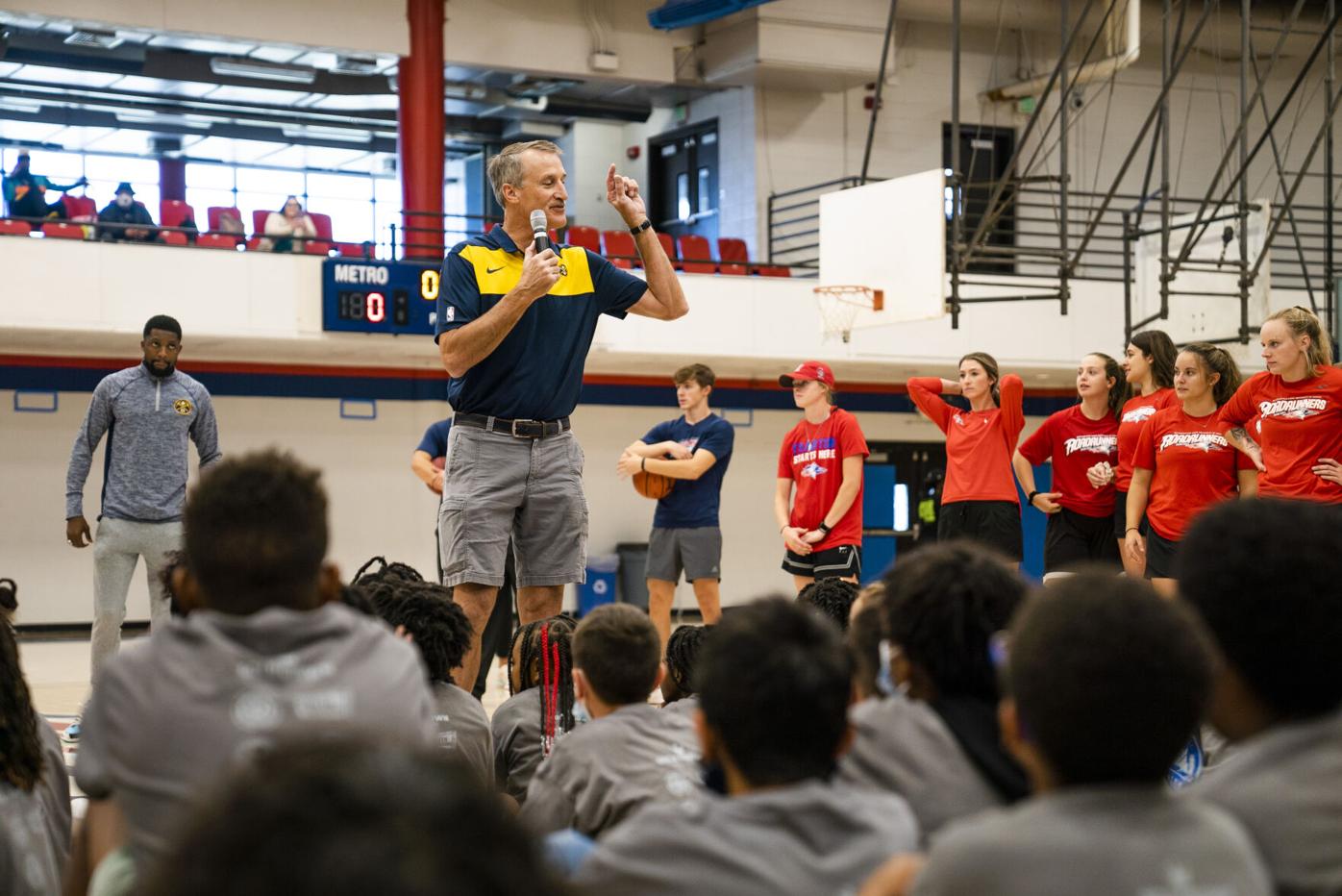 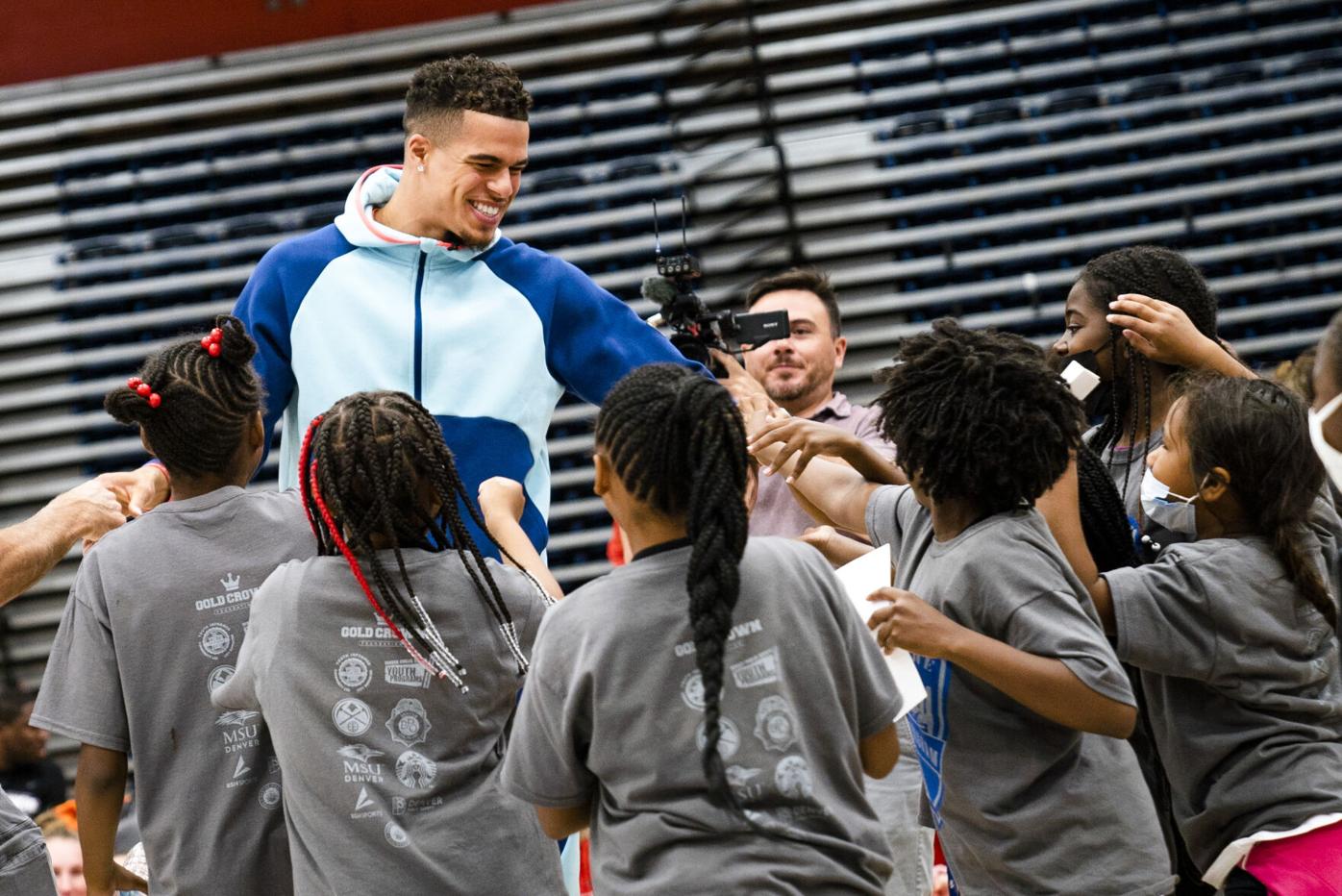 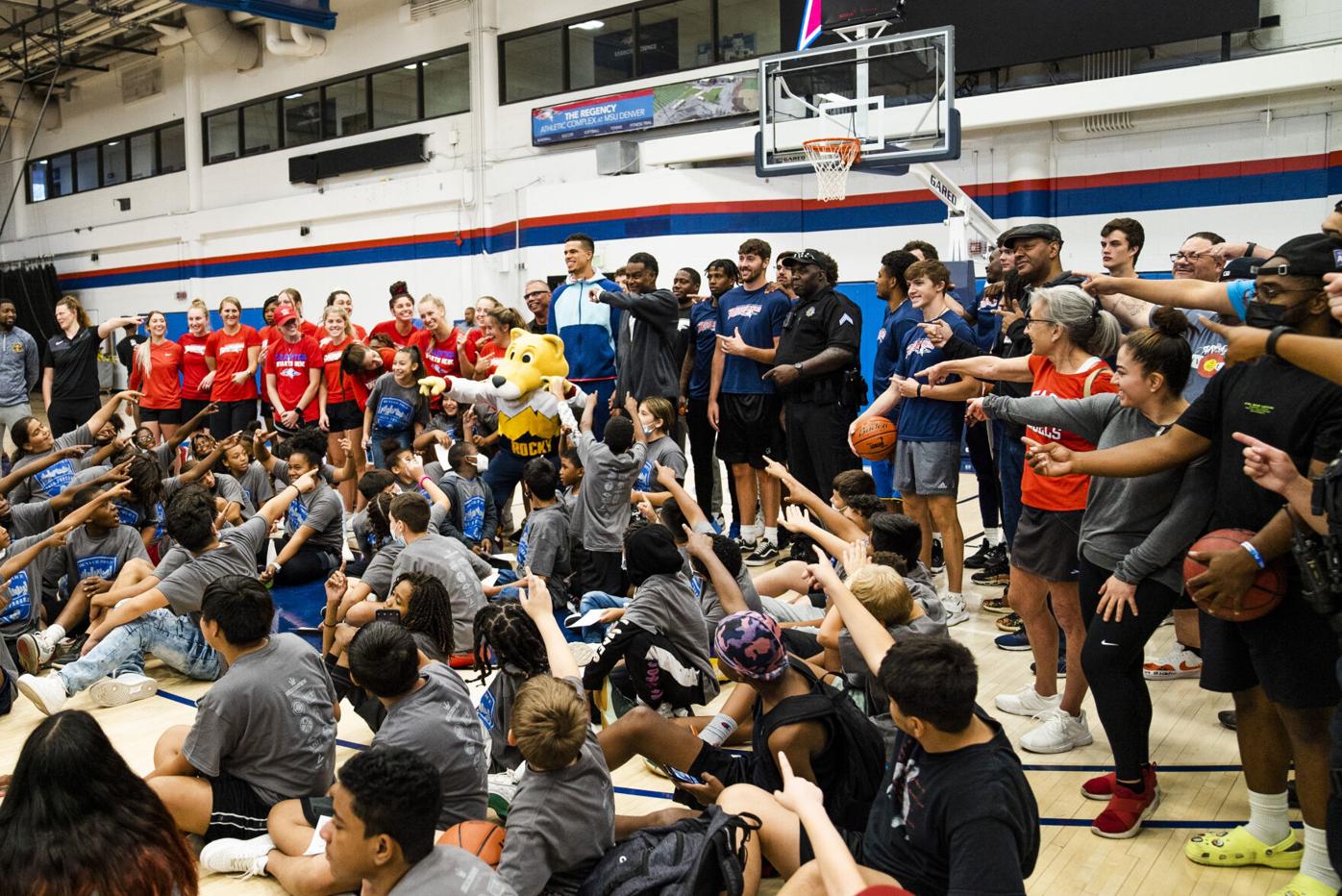 Michael Porter Jr. of the Denver Nuggets plays a game of ‘knock out’ with Denver youth during the ‘Hoop 4 Safety’ basketball clinic at Metropolitan State University of Denver on Saturday, September 25, 2021. Members of the Metropolitan State University of Denver women’s and men’s basketball teams helped kids with their basketball skills. The Denver Police Department hosted the event. (Photo by Katie Klann/Denver Gazette)

The sounds filled the Auraria Event Center on Metropolitan State University Denver's campus on Saturday morning as around 100 children from across Denver gathered for a basketball camp run by the Denver Police Department.

High-fives all around for the young athletes, officers and community partners who made our Hoop 4 Safety basketball clinic a huge success!! @MSUDenverSports @nuggets @Starbucks @GoldCrownCO & Denver Police Foundation pic.twitter.com/XcUzVpZMFj

Several Metro State student-athletes joined in the fun on Saturday morning to try and improve the children's dribbling, shooting and passing skills.

"It's so nice to see kids come in and do the things we love to do," said Metro senior Forward Allie Navarette. "I remember being that young and going to camps and learning a lot, so it's nice to be able to give back."

Denver police Chief Paul said the "Hoops 4 Safety" camp offered an opportunity to give children from some of the "most vulnerable communities" a chance to have fun.

"These are young people that unfortunately because of the violence that has taken place have been exposed to trauma, and we want to break that cycle," Pazen said. "The greatest predictor of future challenges for young people is that trauma side of things, so to be able to have a great day like this, gives these young people hope."

What an awesome day working with the @DenverPolice Youth Program! 💙 Thank you for all you do for our community! We also got to meet the best Mascot in the league! #ROCKY #GoRoadies #GoNuggets pic.twitter.com/iwYK6O1hfn

The children came to the camp from Denver's "five hotspots," neighborhoods that house for 1.56% of Denver's account for more than a quarter of the city's homicides and nearly half of its shootings, Pazen said.

"We want to build more, just so we can be there and help support these young people moving forward and completely break this cycle of violence to give these young folks the greatest opportunity for success," Pazen said.

After over an hour of drills, games and competitions, the participants were gathered on the hardwood floor and surprised by Nuggets Forward Michael Porter Jr. and the NBA team's mascot, Rocky.

Porter Jr. answered questions about how his journey from to the National Basketball Association and also joined in a free-throw competition

Porter Jr. was topped by by 12-year-old Savon Greenwood.

Kurt Barnes, a public information officer for the police department, said the games gave police a chance for children to see them off-duty to build trust and understanding.

"We targeted specific areas of our community that we want to establish a partnership and also a mentorship, so that we can start to move into the community and they can see us and we can see them," Barnes said. "It establishes that positive role."

Pazen called the day a beginning.

"We want to build on this," Pazen said. "We want to continue to uplift these young people and give them the greatest chance for success."

Police look to build positive relationships in Denver's Westwood, a neighborhood that has a complicated history with policing

Driving on the main commercial corridors through Westwood reveals a lot about the southwest Denver neighborhood. On Federal Boulevard, check-c…