A photo from Denver's 2021 Transgender Day of Remembrance. 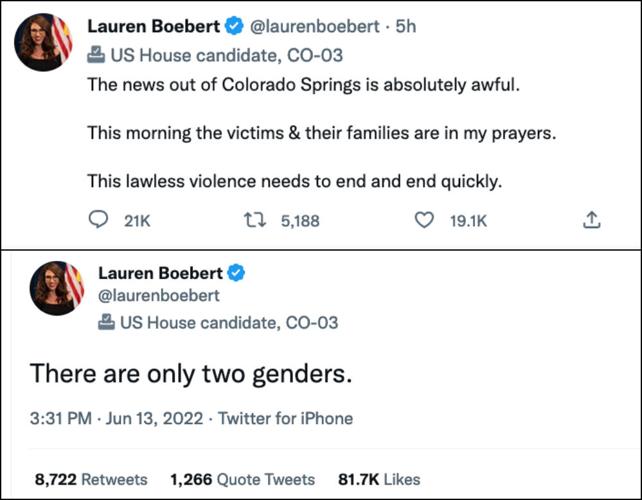 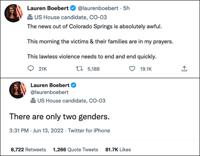 Rep. Lauren Boebert tweeting her thoughts on the trans community in June, below, and her response to the shooting spree in Colorado Springs, above.

On Friday, The Center on Colfax held its annual Transgender Day of Remembrance to acknowledge at least 70 known deaths of trans people from violence or suicide over the past year.

And on Sunday, Rex Fuller, Chief Executive Officer of the largest LGBTQ community center in the Rocky Mountain region, woke up to the horrifying news that a gunman had killed five people and injured at least 18 at a popular gay nightclub in Colorado Springs.

“I’m really angry,” said Fuller. “This might be an overused word, but I’m also kind of triggered.” And he wasn’t alone.

Denver actor and activist Jamie Grayson was more than sad at Sunday’s news.

“I am furious,” he said. “I am sick to my stomach. This is what happens when hate speech and actions against the LGBTQ+ community are amplified and embraced. We must do better.”

The Parasol Patrol, which was formed to shield children from hate speech at drag-queen storytime events, called the killing spree an act of terrorism.

“Unfortunately, we are not shocked,” it said in a statement. “In the last six months, we have seen a rise in groups intent on harming our community, groups fighting to take away our rights and our very lives. Now is the time we will focus our support and energies here, close to home, but with our long-term goal of obliterating hate crimes."

Sarah Kate Ellis, president and CEO of the Gay and Lesbian Alliance Against Discrimination (GLAAD), called the attack unspeakable.

"You can draw a straight line from the false and vile rhetoric about LGBTQ people spread by extremists and amplified across social media, to the nearly 300 anti-LGBTQ bills introduced this year, to the dozens of attacks on our community like this one," Ellis said. "That this mass shooting took place on the (weekend of) the Transgender Day of Remembrance deepens the trauma and tragedy for all in the LGBTQ community.”

The Transgender Day of Remembrance was started in 1999 as a vigil to honor the memory of Rita Hester, a transgender woman who was killed in 1998. The actual number of trans people who have died in the U.S. over the past year is believed to be much higher than 70, Fuller said, because when trans people die, their genders are often reported wrong in official death reports.

“It’s just a very hard day,” Fuller said of Friday’s solemn service. “We put their pictures out and we read out every name and how they died — and that gets to be really emotionally overwhelming for a lot of people. This is just a sensitive, tender time of the year, so then to wake up to this just makes it all the more difficult.”

The Center on Colfax has been through this before. When a man killed 49 people and wounded 53 more in a 2016 mass shooting at a gay nightclub in Orlando, Fla., it was just one day after The Center celebrated its 40th anniversary.

“But this happened right in our backyard,” Fuller said. “We consider the Colorado Springs community to be an extension of our own, and it is just infuriating. And what makes me really angry is that this will be news for a few days, and then it will just go away.”

The Center regularly tailors support groups, special events and other resources to the gender-diverse community. Fuller and his team are now coordinating additional immediate and practical services in response to the shooting, including assembling a wide cohort of counselors in Denver and Colorado Springs.

“I don’t know that there is all that much we can do, frankly, because we seem to have decided that the Second Amendment is sacrosanct, which means this is a problem we are just going to have to live with," Fuller said. “But in my personal opinion, when you live in a country where there are more guns than people, and lax regulations, and a general willingness to accept things as they are, well, that can get you pretty down.”

Fuller said one thing Colorado’s trans and gay communities do not need is Colorado Rep. Lauren Boebert tweeting out her thoughts and prayers, as she did on Sunday morning.

On June 13, Boebert stoked the ire of the gender-diverse community by tweeting, "There are only two genders." This morning, she reacted to the shooting by saying: "The news out of Colorado Springs is absolutely awful. This morning the victims & their families are in my prayers. This lawless violence needs to end and end quickly."

“That made me feel like throwing up,” said Fuller. “For someone who has engaged in ongoing anti-trans rhetoric as part of her campaign and is obviously very into the gun culture herself, I think this would have been a nice time for her to shut up.”

Fuller would rather focus on the dead, the injured, and the dozens of family members whose lives have been upended just as the holiday season begins.

“I found myself thinking that it’s just a few days before Thanksgiving, and there are people who aren’t going to have loved ones at their table,” Fuller said. “That makes me just so very sad, and our thoughts are with them.”

EDITOR'S NOTE: Colorado Springs police initially reported early Sunday that five people had died and 18 were wounded, then changed it to five dead and another 25 wounded. On Monday, a joint operation between police and the city of Colorado Springs corrected the totals to five fatalities, and 17 people sustained gunshot wounds, another person injured in another manner and one victim with no visible injuries but considered a victim, according to city spokesman Max D'Onofrio. The situation was very chaotic on Sunday, D'Onofrio said, which led to the change in numbers. The suspect also was wounded and remains in police custody in a local hospital. He brings the total to 25 people impacted.