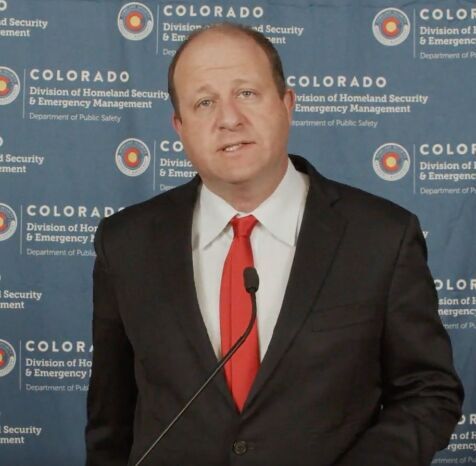 Gov. Jared Polis reiterated his desire recently for local authorities, not the state, to institute masking and other public responses.

Colorado paid more than $630,000 last year to a group of personal and business associates of Gov. Jared Polis that had ostensibly volunteered to help the state manage its way through the COVID-19 pandemic by tracking people’s movements, records show.

Then, when that group’s work was done in late 2020, the state began paying another $1 million in a deal it gave to a startup company created by two people tied to the first group’s work.

Neither of the contracts was publicly bid, but rather were the result of an executive order Polis issued in April 2020 declaring a disaster emergency that suspended state laws requiring bids on purchases relating to the pandemic, no matter the size of the contract. The state normally requires public bids for any contract of more than $150,000.

State health officials defended the deals as valuable to their work battling the raging pandemic, but none offered an explanation for how they went from a public service to a public expense.

Gov. Polis' office said it "had no prior knowledge or involvement in this procurement decision and therefore has no comment."

When Citizen Software Engineers’ cellphone-tracking work became public — it was largely using the information to check whether Coloradans were social distancing at the outset of the pandemic — the nonprofit group was clear about its mission: To help deal with the crisis at little or no cost to taxpayers.

The idea was for the company to assist Polis “combat COVID-19 threats in Colorado,” according to incorporation papers filed by its controlling entity, Innovation Response Volunteers Inc.

“It’s a volunteer organization that is doing work for free,” is what IRV board member Brad Feld told The Denver Post in April 2020. Polis had named Feld, a former business associate, to his Innovation Response Team and his Economic Stabilization and Growth Council to tackle the crisis when it exploded in March of last year.

IRV was purposely set up as a nonprofit, Feld had said, so it could “raise philanthropic funding” of its own to meet its expenses.

Those expenses, however — more than $632,000 including salaries — were covered by the state instead, according to payment records obtained by The Denver Gazette through open records requests.

Even though CSE had no official agreement with the state when the pandemic began, a purchase order for $811,000 showed up at the Colorado Department of Public Health and Environment in July 2020 with guaranteed payments reaching back to March, the records show.

The records don’t indicate how the deal was approved or who approved it.

The purchase order and payments were made out to Citizen Engineers for COVID-19, but the scope of the group’s work came from Citizen Software Engineers, records show.

“These engineers were part of IRV, a private volunteer non-profit corporation that the volunteers created to help the Innovation Response Team respond quickly to technical needs in the face of the beginning of the COVID-19 pandemic,” CDPHE spokeswoman Gabi Johnston told The Gazette in an email. “The civil servants at CDPHE authorized this procurement.”

Johnston did not name those civil servants.

State epidemiologist Rachel Herlihy, with whom the group worked most closely and Colorado’s leading authority on the pandemic, on Thursday told The Gazette that its work has been invaluable in dealing with the crisis, but that she didn’t know how the deal went from a free one to one costing taxpayers more than $1.6 million.

“I was focused on the work they were doing,” Herlihy said. “I’m not the one who handles contracts. From my team’s perspective, the service they were providing to us was incredibly valuable and I’m not sure it was reasonable to think they were going to offer their services for two years into a pandemic.”

The items the state has paid CSE for included aggregate data from a handful of companies that cull information from cellphones. The data comes from a variety of cellphone applications that often ask a user to allow it to track their location. Marketing companies purchase the information and bundle it for resale.

CSE initially used the data to track Coloradans to see whether they were complying with state orders to shelter in place or social distance. The information can track someone to within 10 feet of their position. How else it was used has not been revealed and creators of the company have refused to discuss it.

It’s founder, Tim Miller of Boulder, a long-time technology entrepreneur and financier with close ties to Polis, said its policy was not to speak to the press. He has not responded to efforts by The Gazette to reach him.

CSE’s website has been removed, but details culled from Internet archives show that Miller attracted more than 120 volunteers to help with the project in just its first week. Feld recruited Miller, who in turn recruited the others. Polis named Miller to the IRT group just a week after the pandemic exploded in mid-March 2020.

Feld and Polis in 2006 co-founded Techstars, a firm that offered mentorship to entrepreneurs and looked to speed up investment in startups. Feld and Miller are professionally and personally connected via their days at Avitek, which Miller established.

Miller was former CEO at Rally Software, a Boulder tech company that sold in 2015 for $480 million. Miller helps run Barchetta Pizza, which he founded in Boulder.

The state’s procurement rules require bids for any work exceeding $150,000 unless a department official approves the bypass. Polis’ executive orders did away with that and the government was free to bring on anyone it wanted to help with the crisis and pay them whatever they asked.

Billing records show CSE racked up more than $200,000 in data expenses from several sources in the months before Colorado ever agreed to pay for them, according to receipts submitted to the state.

And CSE was already paying two people — David Jacobson and Parker Jackson — more than $12,000 a month each to analyze the data, records show.

The payments continued without pause through December 2020, records show, with salaries and data expenses racking up thousands of dollars in bills.

But it didn’t end there.

The two main data analysts for CSE, Jackson and Jacobson, started their own company and continued the work at substantially higher cost to taxpayers, records show.

At the end of December 2020, CDPHE handed the one-month-old company based in Ward, Colo. — Vanadata — a no-bid contract for $361,000 to do essentially the same work the two had been doing at CSE.

Within four months, the cost of the purchase-order contract exploded to nearly $1.1 million, records show.

“We saw their value as data scientists,” Herlihy said. “We were very familiar with analyzing epidemiologic data, but not with data science, and theirs is in analyzing and interpreting all data sets of all different types.”

That includes survey data from Facebook about mask use, vaccine data, as well as weather and humidity data to distinguish any discernable patterns about virus transmission.

Among Vanadata’s expenses are $274,000 in software subscriptions from five companies, $272,000 in data subscriptions — such as are tracked by cell phone apps —  from three companies, $120,000 in space to store it all in the Amazon cloud, and $442,000 in salaries, mostly for Jackson and Jacobson.

“Given the value of the information as well as the provided analytic expertise and tools, the work became an integral part of the response and CDPHE’s epidemiologists opted to continue the contract,” Johnston said. “As mobility patterns have returned to near normal levels, the importance of mobility data is not as great as it was earlier in the pandemic, but it continues to help us address questions.”

The company is doing so well now that its principal, Parker Jackson, is advertising three full-time positions — “all 6-figure salaries and 100% remote,” according to its LinkedIn advertisement — working on “cutting-edge predictive modeling” for the state’s COVID response.

“We are among the state’s top experts in the pandemic,” Jackson’s ad declares.

Gazette efforts to reach Jackson and Jacobson were unsuccessful.