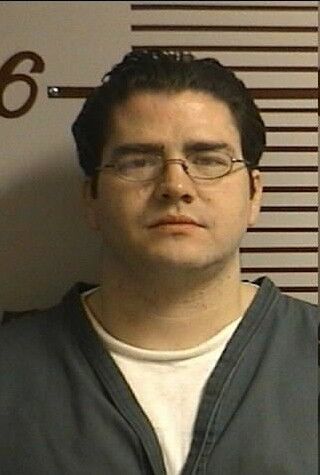 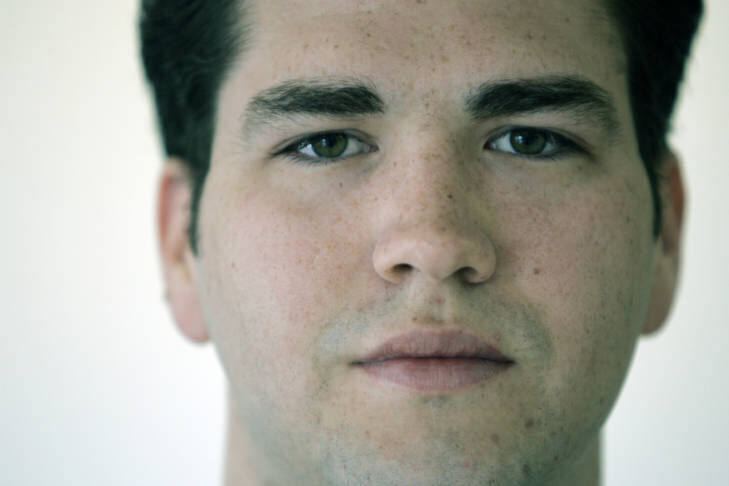 Raymond Gone speaks to a reporter during an interview at the Buena Vista Correctional Facility in Buena Vista, Colo., on June 14, 2005. Sentenced at 16 as an adult, he is serving life without parole for the murder of Denver policeman Shawn Leinen. 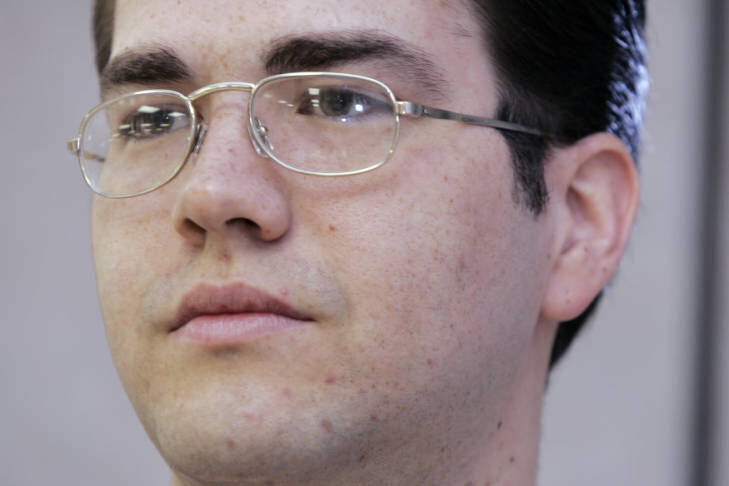 Raymond Gone speaks to a reporter during an interview at the Buena Vista Correctional Facility in Buena Vista, Colorado June 14, 2005. Sentenced as an adult as a minor, he is serving life without parole for the murder of Denver policeman Shawn Leinen in February 1995. 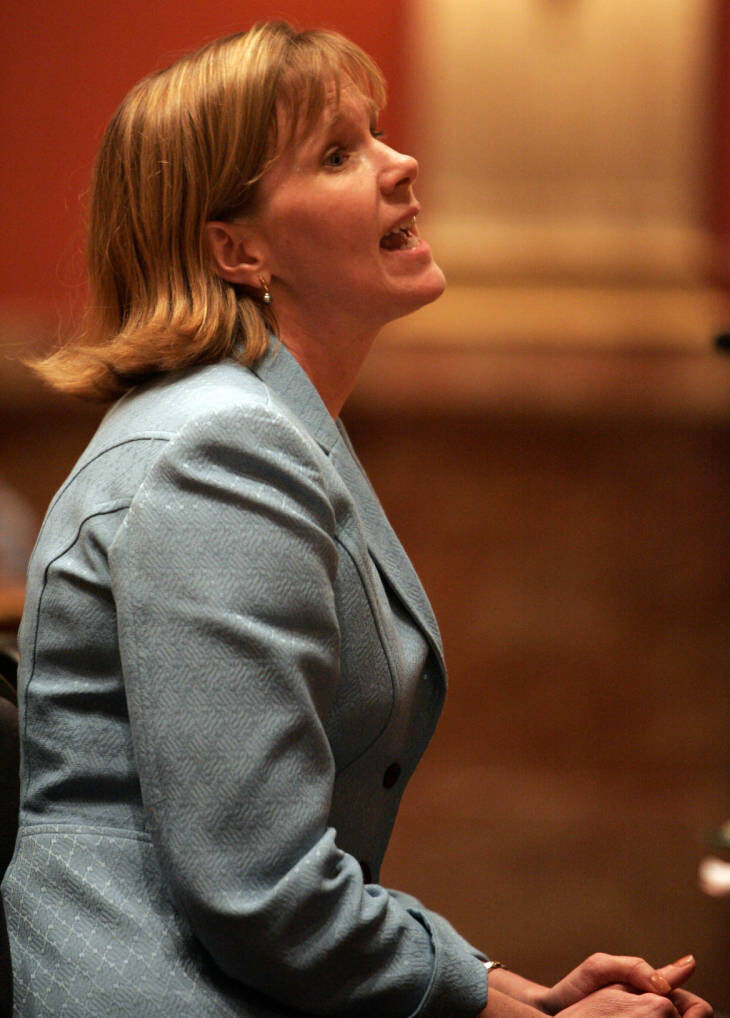 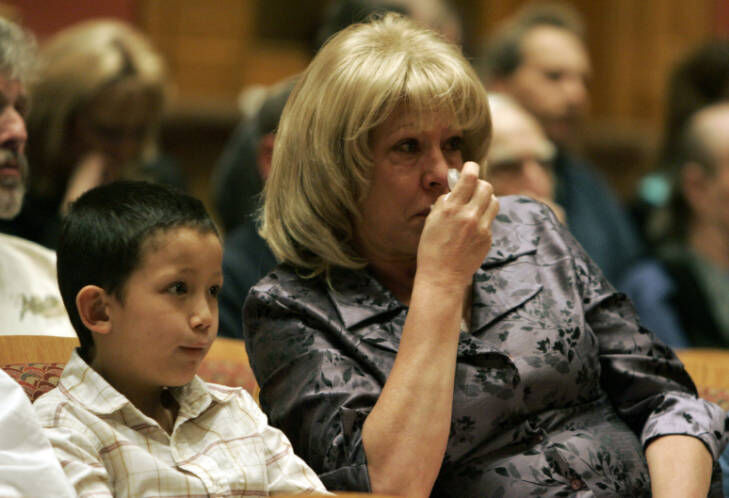 Monica Goetsch wipes tears from her eyes as Susan Moran, widow of murdered Denver Police Officer Shawn Leinen testifies against bill 1315, at a committee hearing on proposed HB 1315 at the State Capitol on March 16, 2006.

Raymond Gone speaks to a reporter during an interview at the Buena Vista Correctional Facility in Buena Vista, Colo., on June 14, 2005. Sentenced at 16 as an adult, he is serving life without parole for the murder of Denver policeman Shawn Leinen.

Raymond Gone speaks to a reporter during an interview at the Buena Vista Correctional Facility in Buena Vista, Colorado June 14, 2005. Sentenced as an adult as a minor, he is serving life without parole for the murder of Denver policeman Shawn Leinen in February 1995.

Monica Goetsch wipes tears from her eyes as Susan Moran, widow of murdered Denver Police Officer Shawn Leinen testifies against bill 1315, at a committee hearing on proposed HB 1315 at the State Capitol on March 16, 2006.

Denver District Attorney Beth McCann decided “extraordinary mitigating circumstances” warranted the reduction in the sentence — and eventual release from prison — of a man sentenced as a juvenile to life in prison without the possibility of parole for the fatal shooting of a Denver police officer.

McCann on Monday filed a notice of agreement notifying the court that she and the lawyer for Raymond Gone, now 42, had agreed to vacate Gone’s convictions of first-degree murder and attempted aggravated motor vehicle theft.

Life without parole for youths debated by Colorado lawmakers

Under that court filing, the prosecution and defense also agreed that Gone should face a new sentence of between 40 to 48 years in prison with the possibility of parole. McCann further agreed to not request restitution.

Gone was convicted in the Feb. 25, 1995, killing of Denver police officer Shawn Leinen.

Friends and relatives of Leinen wrote letters strenuously opposing a reduction in Gone’s life prison sentence, though Gone’s lawyer, Ann Roan of Boulder, said in an interview said a lesser sentence was warranted because her client was a juvenile at the time of the killing with an unstable childhood.

She also stressed that her client had rehabilitated himself in prison.

In response to the notice of agreement filed by the defense and the prosecution, Denver District Court Judge Karen Brody on Monday resentenced Raymond Gone to 44 years in prison after he pleaded guilty to an amended charge of felony murder committed without deliberation during the felony charge of escape.

The new prison sentence will be imposed retroactively to the original Sept. 1, 1995, sentencing hearing. When Gone will be eligible for parole could not be immediately determined.

Court records show the 28-year-old Leinen chased Gone, then 16, by foot, attempting to question him for an aggravated misdemeanor motor vehicle theft.

McCann agreed to stipulate to the court that the following “extraordinary mitigating circumstances” warranted the resentencing: Gone’s age at the time of the offense; the unstable environment in which he was raised, including his family’s history of mental illness and addiction; and commendable behavior by Gone while in prison.

“The people who had the power, the District Attorney’s Office and the court, did justice, and I am incredibly grateful to them,” said Roan. “There is no dispute that Mr. Gone caused officer Leinen's death, but it was not with deliberation and was not a cold blooded, calculated act.

"It was the hasty impulsive panicked act of a 16-year-old boy who had been in more of a war in those 16 years than most of us will ever be able to understand. At every point in his young life, the systems that are supposed to be in place to save children that are abused and neglected or horribly mistreated failed."

Leinen’s widow, Susan Moran, was six months pregnant with their child, Maxwell, at the time of Leinen’s killing. Moran did not return telephone messages seeking comment.

Susan Moran’s brother, Steven Laughrey, wrote the judge, stating the 25 years that Gone has spent in prison are not nearly enough, especially considering that the people who knew Leinen only have memories left.

“He took the life of a son, brother, husband, dad, police officer, Shawn Leinen,” Laughrey wrote. “This man is still living and breathing and Shawn is not. He should not be allowed to be a member of the outside society. He knowingly pulled that trigger that night that took Shawn’s life. He consciously knew what he was doing.”

Laughrey said that when he sees Maxwell, he still sees his father.

“He looks like Shawn,” he wrote. “He acts like Shawn. I know they would have been best friends. No child should have to grow up without a father.”

A letter to the judge from Leann Webb Hvizd, a longtime friend of Susan Moran, stated that releasing Gone from prison would amount to a “roll of the dice.”

“If Gone is set free, this will set a horrible (precedent)for anyone in jail for killing an officer of the law,” Hvizd wrote. “I hope all Denver Police Department officers are aware of this case and this hearing.”

The resentencing came under the auspices of a change in state law enacted in 2016 to address the issue of 48 juveniles sentenced to life in prison without parole in Colorado for murders they committed when they were teens.

The Legislature was forced to grapple with that issue after the U.S. Supreme Court in 2012 found such punishments unconstitutional.

Testimony during the trial indicated that a witness stated she heard Leinen shout moments before he was killed, “Don’t do it man!”

Roan said that the original defense lawyers had not conducted a proper investigation, which would have shown the teen who testified that she had heard Leinen cry out had been drinking much of the night and was inside a house when the shooting occurred.

“His trial counsel did not do an investigation to effectively cross-examine her at trial,” Roan said.

In a court filing, the defense lawyer said Gone’s prison disciplinary record showed Gone had committed only seven minor violations of prison rules between the ages of 17 and 22, and that three of those violations had warranted only verbal reprimands.

For the past 20 year, he has not violated any prison rules, she said.

During his time in prison, Gone enrolled in a small business college education program and has completed courses in basic offset printing, custodial services, small business management, industrial technology and garment manufacturing, according to her filing.

He also has enrolled in distance courses at Adams State College, with a GPA ranging from 3.50 to 3.67.

She added that when he was a child, Gone was raised by a “terrifyingly amoral, abusive, addicted woman, who neglected the fundamental duty every person who decides to bring a baby into this world carries.”

Gone’s parents met in an alcohol and drug rehabilitation facility, according to the court filing.

The mother eventually left the father. Gone’s sister was subjected to sexual abuse from men their mother brought home, the defense stated in the filing.

Gone’s childhood was spent in and out of foster care. He returned to the abusive environment of his family home to protect his sister, the filing further stated. His mother died when she drunkenly stumbled off a bridge, according to his lawyer.

“Ray has become the man he is not because of the guardrails our system wants to believe function to protect vulnerable children, but because, when he was sent to prison, he decided that the only way to atone for the life he had taken was to make himself a person who would — finally — break the cycle of privation, immorality and callousness that have dogged both sides of his family for generations,” according to the defense filing seeking a reduced sentence.

Colorado man, 60, charged with multiple counts of sexual exploitation of a child

A 60-year-old has been charged with several counts related to sexually exploiting a child earlier this year, the Mesa County Sheriff's Office …

WESTMINSTER, Colo. (AP) _ Maxar Technologies Inc. (MAXR) on Wednesday reported a fourth-quarter loss of $40 million, after reporting a profit in the same period a year earlier.

DENVER (AP) — Colorado has reported a substantial decrease in deaths and hospitalizations from the influenza amid public health measures meant to prevent the spread of the coronavirus.

DENVER (AP) _ Ping Identity Holding Corp. (PING) on Wednesday reported a fourth-quarter loss of $3.4 million, after reporting a profit in the same period a year earlier.

DENVER (AP) — Some wildlife advocates are urging Colorado officials to streamline planning for reintroducing the gray wolf, arguing the launch of an overly bureaucratic process will frustrate the intent of voters who approved reintroduction by the end of 2023.

DENVER (AP) — Colorado families pleaded with state lawmakers on Wednesday to pass a bill to expand cannabis-based medicine at school.