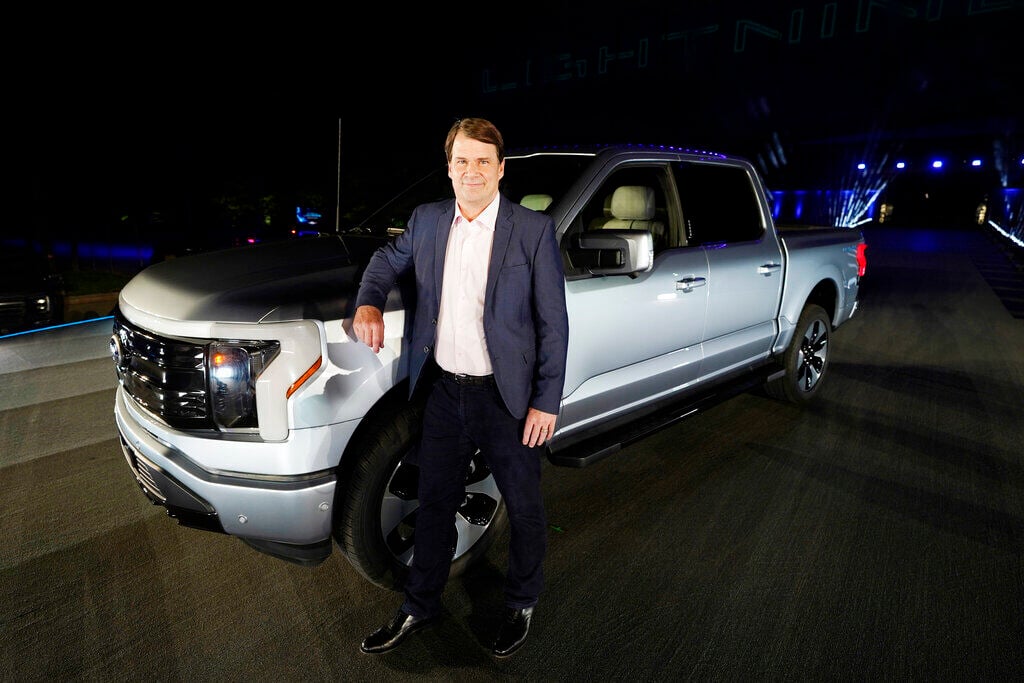 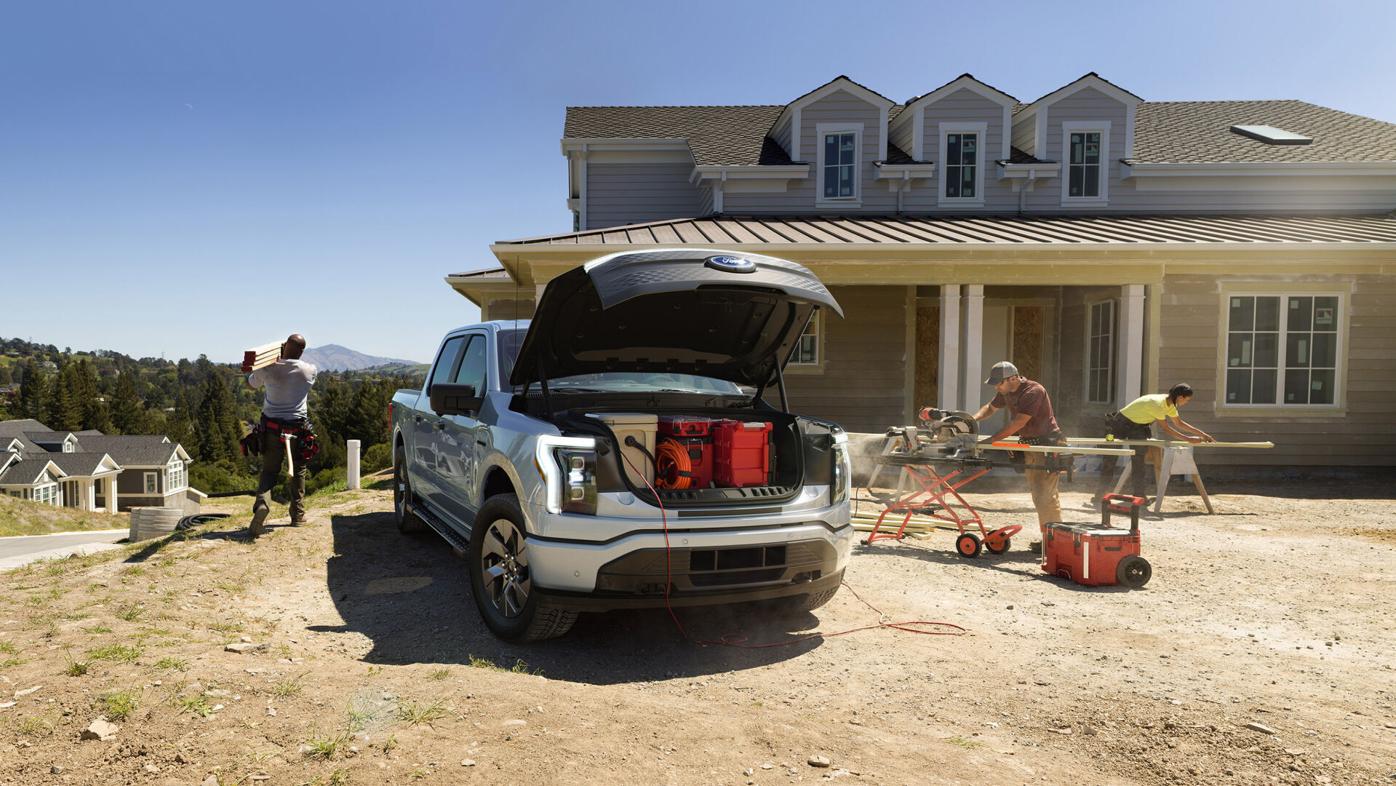 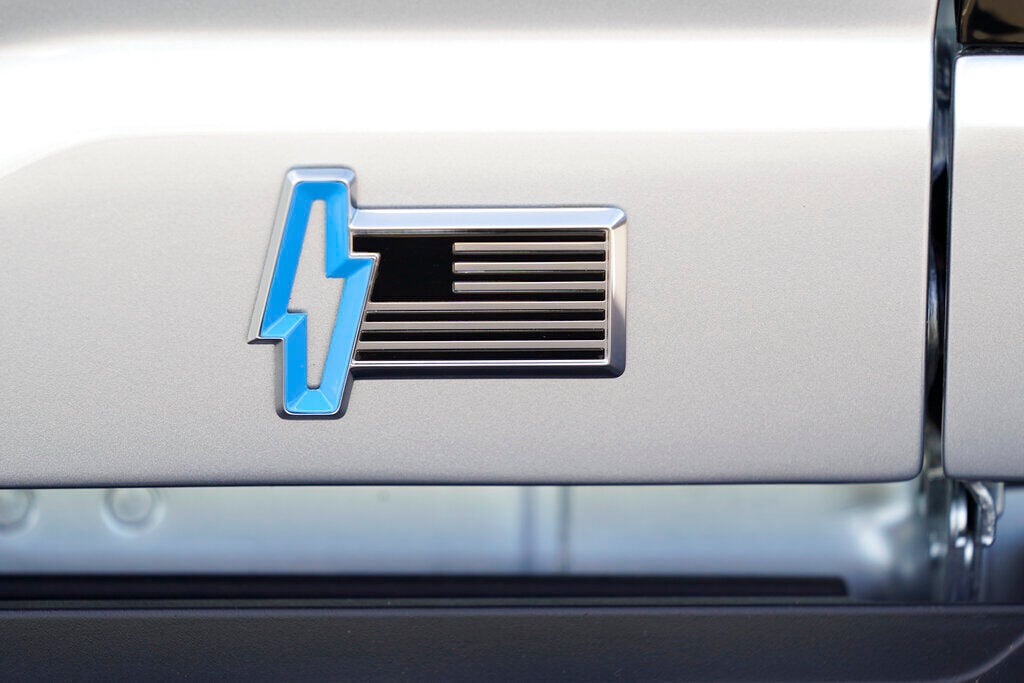 A pre-production Ford F-150 Lightning. The electric truck is

a deliberate effort by Ford to move electric vehicles from specialized niche products to the mainstream.

“It’s all about torque off the line.”

Let me admit right away that I have no idea what that means, but it’s one of those cool automotive phrases, like “throw a rod” or “blow a gasket,” that us guys love to throw around in a macho moment.

I’m talking about the new all-electric Ford F-150 Lightning pickup, which I got to experience in a test drive last week.

The thing went from zero to 60 in a little over 4 seconds and I haven’t felt that woozy since I upchucked my Cherry Coke on a Tilt-A-Whirl in fifth grade. When I asked a Ford guy about all that vroom, that’s when he said, “It’s all about torque off the line.”

Fact: An electric F-150 can accelerate MUCH faster than a gas one. Why?

The more torque, the greater your acceleration. The reason electric motors are better at torque is that they are much simpler, and the power doesn’t have to go through a bunch of moving parts, like the gearbox, before it gets to the wheels.

Why is this important?

Here’s why. The whole day I was checking out the new F-150 at a cone-filled parking lot in Commerce City with hundreds of other gearheads, nobody said a word about going green, cutting emissions, reducing carbon footprints or any enviro-talk like that.

No, the conversations were about torque. And the cool Antimatter Blue paint job. And the low-center of gravity because there’s not a big motor, which makes the Lightning corner real nice.

On each Lightning, there are eight outlets to plug stuff into.

The truck is basically a rolling battery that can power three bedrooms of your house during a power outage. Or more importantly, the Lightning could power a food trailer, portable hot tub, two air compressors, an electric grill and a popcorn maker all at once. I’m talking tailgate party to beat all tailgates.

Here’s why I think this is all kind of revolutionary.

The F-150 is America’s most popular motor vehicle of all time, hands down. Ford’s F-series pickups have outsold every other car or truck for 39 years running.

If Americans start buying an electric version of their favorite pickup just because they like it better than their internal combustion unit, just because they think it’s cooler, faster, more useful or even more macho, then suddenly we got a four-on-the-floor paradigm shift on our hands.

“For the typical truck customers, it’s the same body, same bed, it can still haul a bunch of weight, up to 10,000 pounds,” Ford guy Max Poirier told me. “It’s built at the Dearborn assembly plant where we build all of our great gas trucks. There’s just more functionality with comparable capability, and it’s the best-driving truck that we’ve ever had.”

That’s when a dude next to me said. “It’s all about the torque off the line … I hate going back to gas cars. It doesn’t feel right any more.”

Right now, you think about electric cars and you think about those frilly, costly, California Teslas. Or The Leaf, for God's sake, or the Prius, which sounds suspiciously like Priss if you ask me.

But if people start thinking about electric cars as red-blooded, hard-working pickup trucks that can fire up the power tools on a construction site without a generator, then I think a whole lot of people are going to start buying these suckers.

The Ford guys told me about 150,000 have been preordered, and Ford just announced they are investing $250 million more and creating 450 more jobs at three Michigan plants to make more of them. And they don’t go on sale until next summer.

And the less expensive thing.

You heard that right. With the $7,500 federal rebate, and the $2,500 state rebate, the Lightning is gonna cost less to buy than the F-150 internal combustion unit. And then you save all that money on gas and repairs because they got so many fewer moving parts, and suddenly you got every business person who owns a fleet of trucks of some sort buying ‘lectric because he’s cutting costs and making his CFO smile.

Suddenly, electrification is all about the bottom line, not some hazy green future.

“I think it’s the future of our industry and our company for sure,” said Kevin Shaughnessy, partner in Phil Long Dealerships here in Colorado.

That means the Lightning could revolutionize America’s car culture and, given that transportation is the biggest contributor to greenhouse gases in the world, one pickup truck could elevate electrics in a way that might seriously start to address climate change in this country.

Who said reducing carbon emissions couldn’t be fun? And fast?