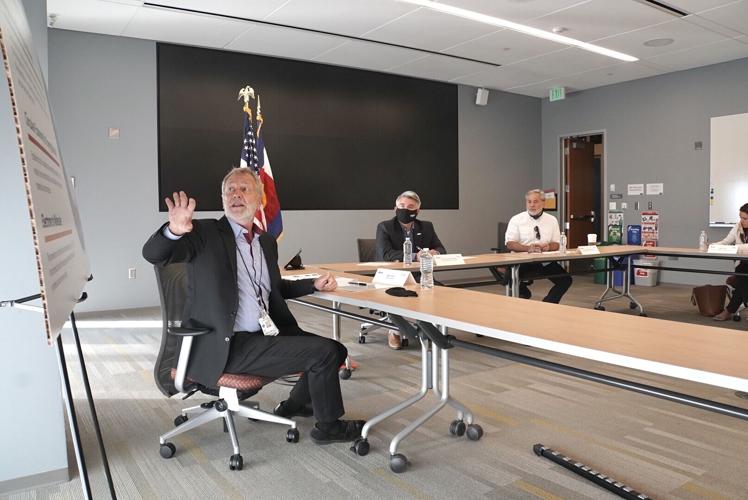 Martin Keller, director of the National Renewable Energy Laboratory in Golden, makes a presentation to U.S. Sen. Cory Gardner, center, and Dan Brouillette, secretary of the U.S. Department of Energy on Wednesday, Aug. 12, 2020. 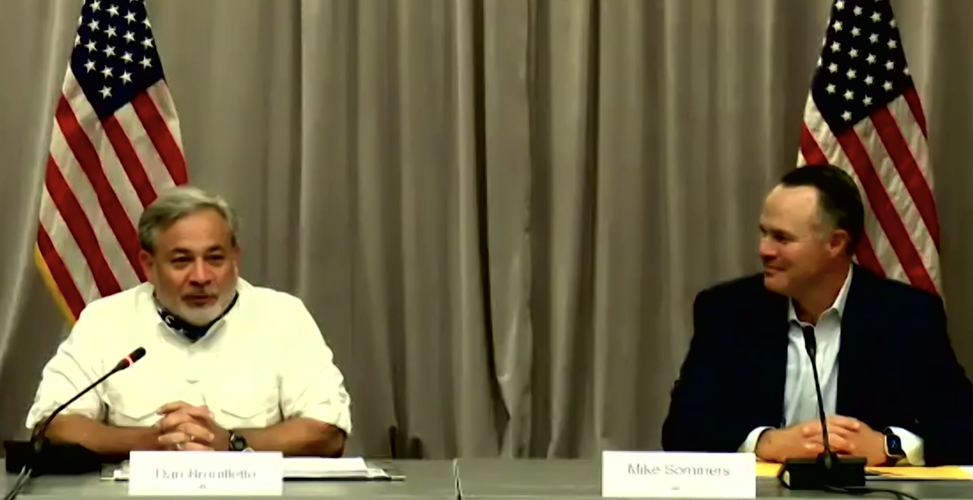 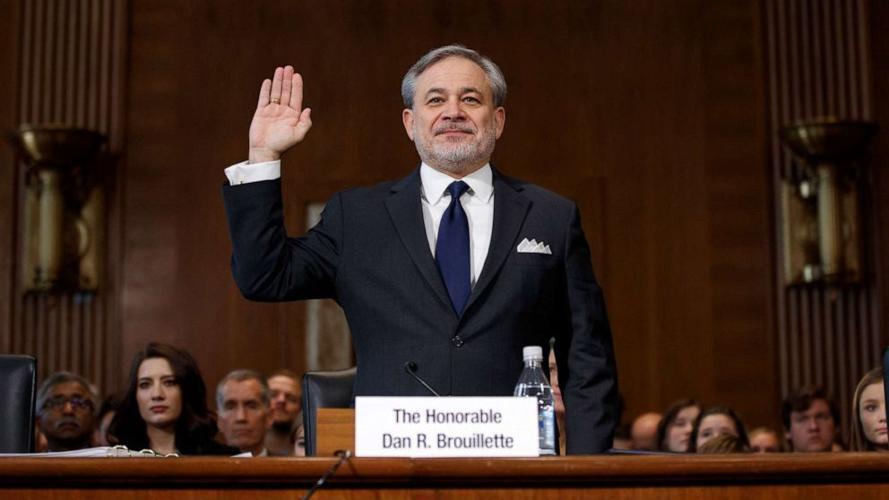 Dan Brouillette is sworn in for his confirmation hearing before the U.S. Senate Energy and Natural Resources Committee on Nov. 14, 2019.

Martin Keller, director of the National Renewable Energy Laboratory in Golden, makes a presentation to U.S. Sen. Cory Gardner, center, and Dan Brouillette, secretary of the U.S. Department of Energy on Wednesday, Aug. 12, 2020.

Dan Brouillette is sworn in for his confirmation hearing before the U.S. Senate Energy and Natural Resources Committee on Nov. 14, 2019.

President Trump's Secretary of Energy Dan Brouillette visited Colorado on Wednesday to see and hear about the state's portfolio, from emerging renewable technology to sustaining oil and gas development in the meantime.

Brouillette spoke to a roundtable of Colorado business and policy leaders about the latter after visiting the National Renewable Energy Laboratory in Golden with U.S. Sen. Cory Gardner to see advancement on the former.

The federal leaders helped break ground on a Research and Innovation Lab.

Q&A with Lynn Granger | 'We are part of the solution'

She's the new face and voice of the Colorado Petroleum Council — a fresh recruit on the front line in the battle over oil and gas development.

After the tour, Gardner said it was an honor to join Brouillette to break ground on the new facility in Golden, which he helped get funding for.

“I’m proud to have helped increase NREL’s funding by nearly 50% during my time in the U.S. Senate,"  said the incumbent Republican, facing a stiff election this year. "NREL is instrumental in advancing our nation’s renewable energy technology and provides a sizable economic impact for Colorado. Its cutting-edge research ensures the United States remains a global leader in clean energy technology, and I will continue to be a strong advocate for NREL’s work in the U.S. Senate.”

"We're committed to using all our energy sources here in the United States," Brouillette told reporters after the roundtable.

The United States produced 13% of the world's oil supply and has emerged as a reliable energy leader during the pandemic. Colorado is the seventh-leading state for energy production.

Brouillette spoke about developing infrastructure to move oil and gas to the coasts and sell the product abroad, such as the Jordan Cove pipeline project that would directly benefit Western Colorado's natural gas market.

"Imagine the place we would be in if we were still dependent on foreign energy during this pandemic," Sommers said during the roundtable. "It would have made this so much — so much — worse. The problem we have now is that while America can supply the world with energy, there are activists trying to cut off that supply."

The Trump administration is preparing to release new methane rules, easing those adopted by the Obama administration based on Colorado's nation-leading regulation of the potent greenhouse gas.

Brouillette characterized the existing rules as doing more harm than good for its aim to clean up emissions.

"This industry is one of the most innovative in the world, and they're coming up with solutions to things such as things like methane emissions that, frankly, go well beyond anything any governmental rule or regulation," the secretary said. "What we've seen in the past is a top-down approach where Washington, D.C., imposes on the industry what it thinks the right answer should be."

He said the Trump administration wants to get out of the way and let the "companies do things we couldn't have imagined three, four, five, eight, 10 years ago."

Sommers said the data shows the producers are driving down methane emissions even as they've ramped up production through technology, partnerships and techniques across the industry to reduce methane emissions,

Brouillette said energy is key to the nation's future in the recovery and in national security, something unfathomable just a decade ago.

The energy secretary said the notion that oil and gas is "dirty energy," with a clean and complete alternative waiting by. Not so, he said. The nation's renewable energy tomorrow depends on natural gas production today.

"These two industries go hand in glove." Brouilette said. "Until we reach a day in America that we have battery technologies that have grid-scale storage — and that's not near-term; we still have a ways to go — the renewable industry will continue to depend on this industry.

"We can't lose sight of that."

His budget this year sought to amp up the development of energy storage technology to hold more wind and solar energy to use when the sun isn't shining or wind isn't blowing.

"It's the cornerstone of our state's economy," she told Brouillette.

"We really believe business is a force for good and that we're all interconnected," she said. "The reason business is good is because at the end of the day we're employing people, providing products to people and the supply chains that help people and help them achieve their American dream."

Brouillette grew up in Louisiana the son of an oil field worker, and he once worked as a pipeline welder. He was deputy secretary of energy until he replaced former Texas Gov. Rick Perry last December. Perry was implicated in the pending impeachment case against President Trump related to dealings with Ukraine.

Brouillette previously was senior vice president and head of public policy for USAA, the financial services to the military community, and was a vice president for Ford Motor Co.

While Gardner backed the nomination, Colorado's senior senator, Michael Bennet, was listed as "not voting" on Dec. 2 when Brouillette was confirmed 75-15. At the time Bennet was running for president and was one of seven senators seeking higher office who missed the vote.

Brouillette has been a renewable energy supporter. In February, during a congressional budget hearing, he appeared to break with the Trump administration's efforts to spur on development of fossil fuels.

"That allows people to move even further, perhaps even to one day where we achieve a goal of 100% renewables," he told the energy subcommittee of the House Appropriations Committee. "Who knows. We can’t do it today. We are going to be fully committed to this."

The utility announced Wednesday it would support electric vehicle initiatives that could save customers up to $1 billion worth of traditional fuel each year by 2030 and cut nearly 5 million tons of carbon emissions.

The National Renewable Energy Laboratory will play a key role.

"Electrification of the transportation sector is a critical priority in Colorado and other states that Xcel Energy serves," Martin Keller, NREL's director, said in a statement. "Partnerships are a vital part of NREL’s mission, and we value our growing collaboration with Xcel Energy. This partnership allows NREL to further leverage our world-class capabilities in transportation and help bring critical technology and infrastructure to the marketplace."

Boulder-based Western Resource Advocates has long pushed in that direction.

State Sen. Ray Scott, a Republican from Grand Junction who is perhaps the statehouse's leading authority on traditional energy development, said the question is between traditional sources and unreliable emerging supplies. He said exporting Colorado's gas improves the environment in a much larger sense.

"It's important to the world, and I think that's something that not a lot of people understand," he said of natural gas that burns cleaner than other sources. "There's a world demand that's much different than what people believe it is on a local basis. We can really make a huge difference in China, India and other places we need to get the gas to."

He said some of those countries are turning to Russia, instead, for energy.

"That becomes an international security issue we need to talk about," Scott said. "As we talk about this narrative going forward, I think it's going to be very important that the United States understands that. During this pandemic, if we had been depending on somebody else for what our energy needs were, I can't even imagine where we would have been today."

Producers are concerned about the regulatory burdens that are growing in Colorado, the seventh-best producing state in the country.

The American Petroleum Institute released its annual “State of American Energy” report on Tuesday, highlighting Aurora specifically as benefiting from the industry that is responsible for roughly 89,000 jobs in the state.

She succeeds Tracee Bentley, who stepped down in March to become CEO of a consortium of fossil fuel producers.

Colorado's transportation system has been idling at the crossroads of growth and politics for a long time. The solutions won't be easier or cheaper post-pandemic, but critical to the state's recovery and its prosperity, according to a new paper from two of the state's best-informed sources published Thursday by the Common Sense Institution policy think tank.

Compared to the first six months of 2019, new car registrations from January through June dropped by more than one-third in 2020.

The Colorado Energy Office moved on its plans for the future of transportation when it released the Colorado Electric Vehicle Education and Awareness Roadmap earlier this week.

Colorado is part of a new deal involving several states to advance electric trucks and buses, the latest step in Gov. Jared Polis' campaign promise to clean the air and move the state toward renewable energy.

COVER STORY | CLEARING THE AIR: Decades after the 'brown cloud' was part of life in Denver, the stay-at-home orders may have shown a way out

Under stay-at-home orders for about a month and a half, the city’s sudden shift to stiller life led to some unexpected consequences: cleaner air from falling car emissions, streets turned over to walkers and cyclists, more time to consider the connection between public health and the environment.