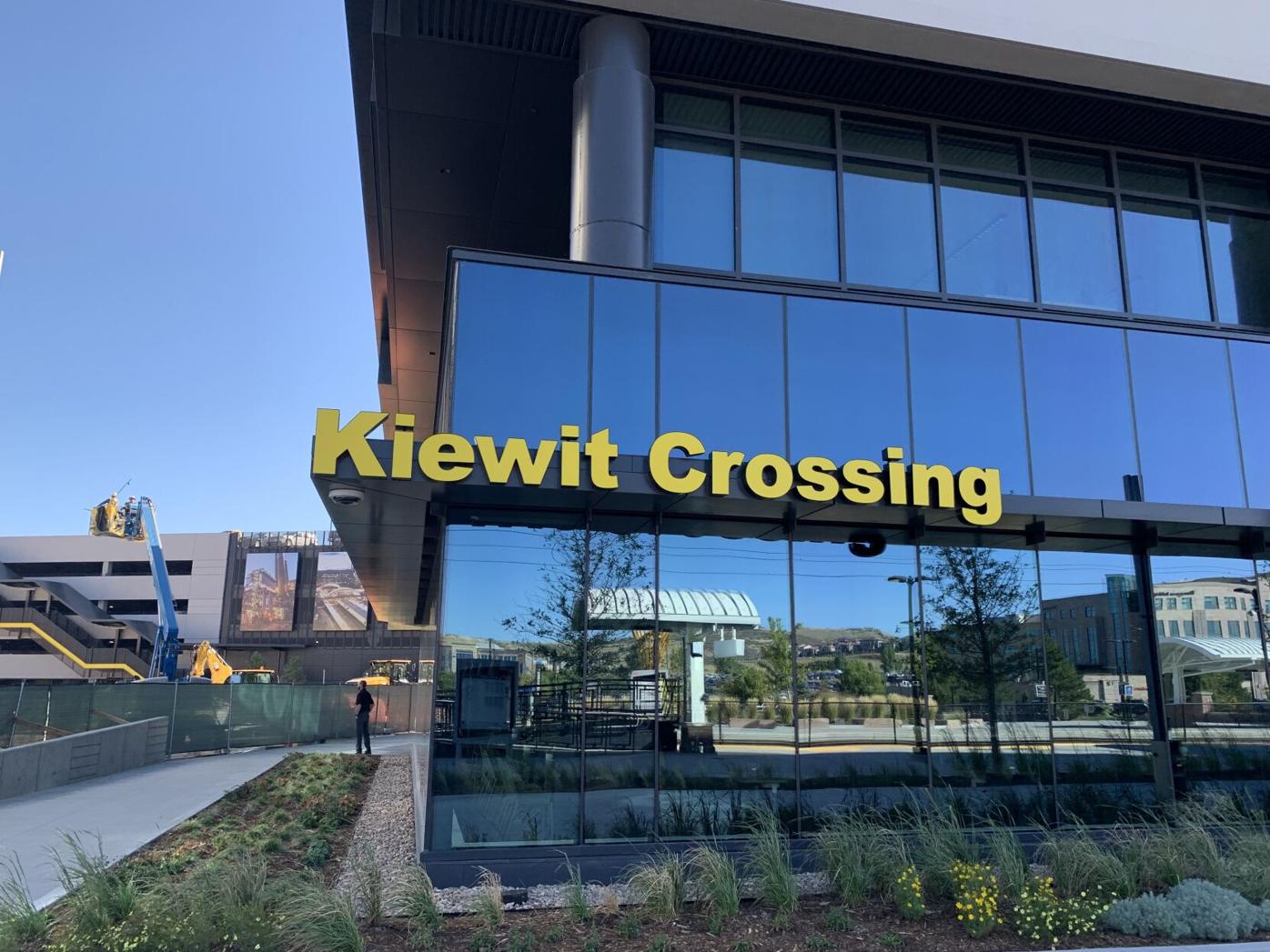 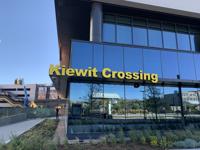 The new headquarters building of Kiewit. The reflection of the RTD Sky Ridge light rail station is visible. 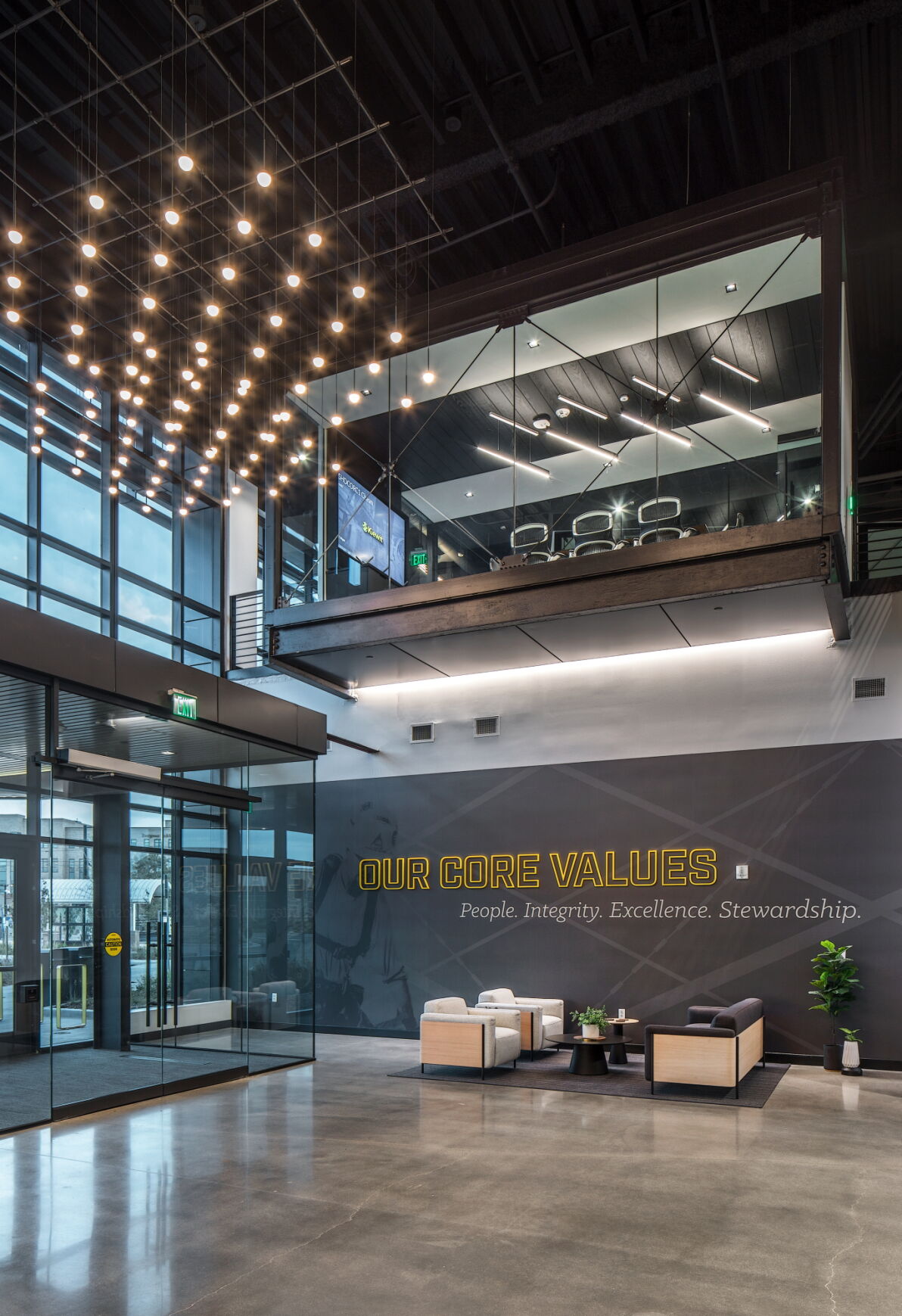 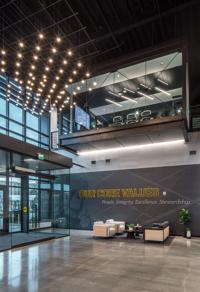 The lobby of Kiewit headquarters building (K1) in Lone Tree. 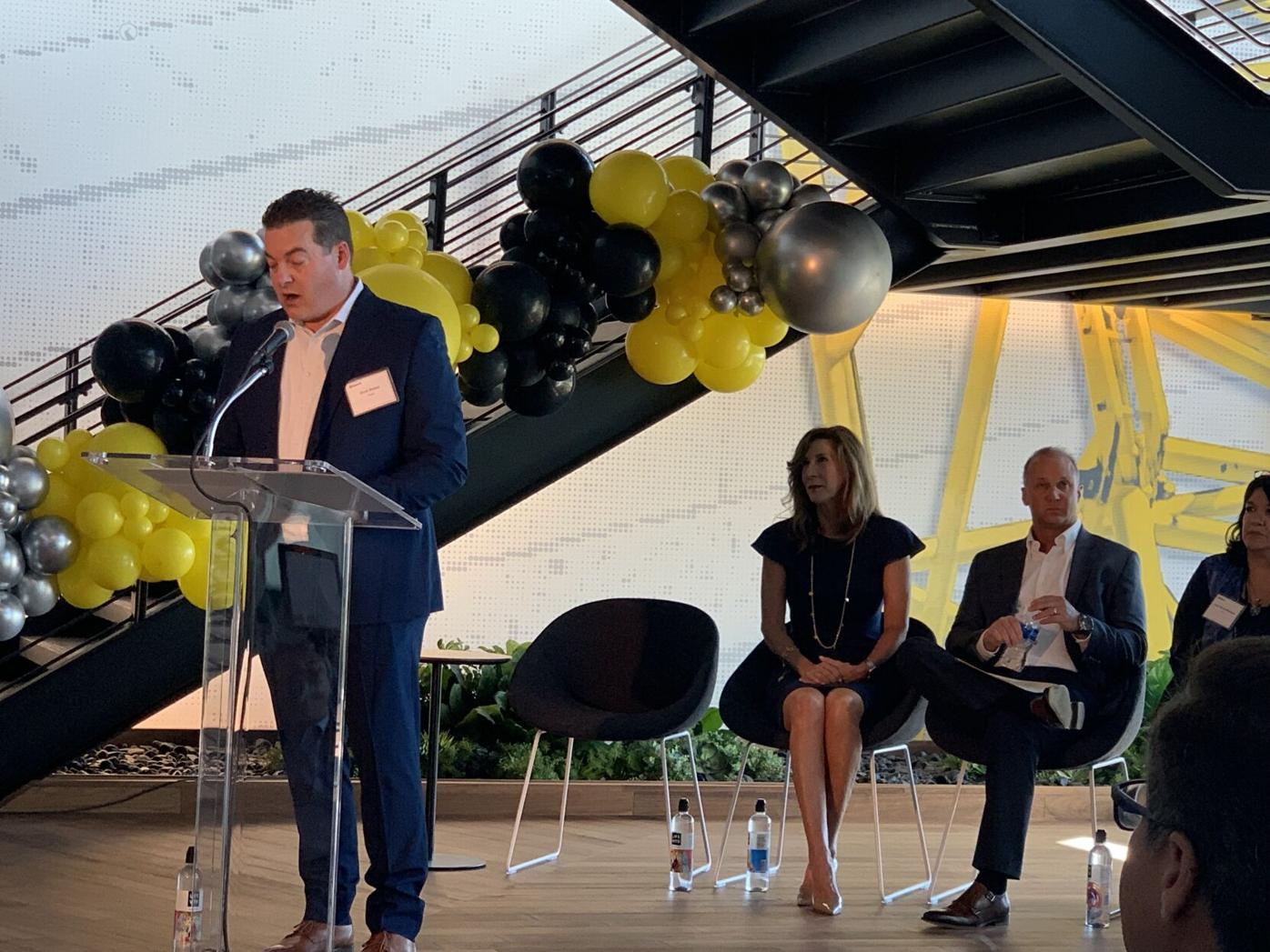 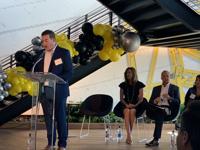 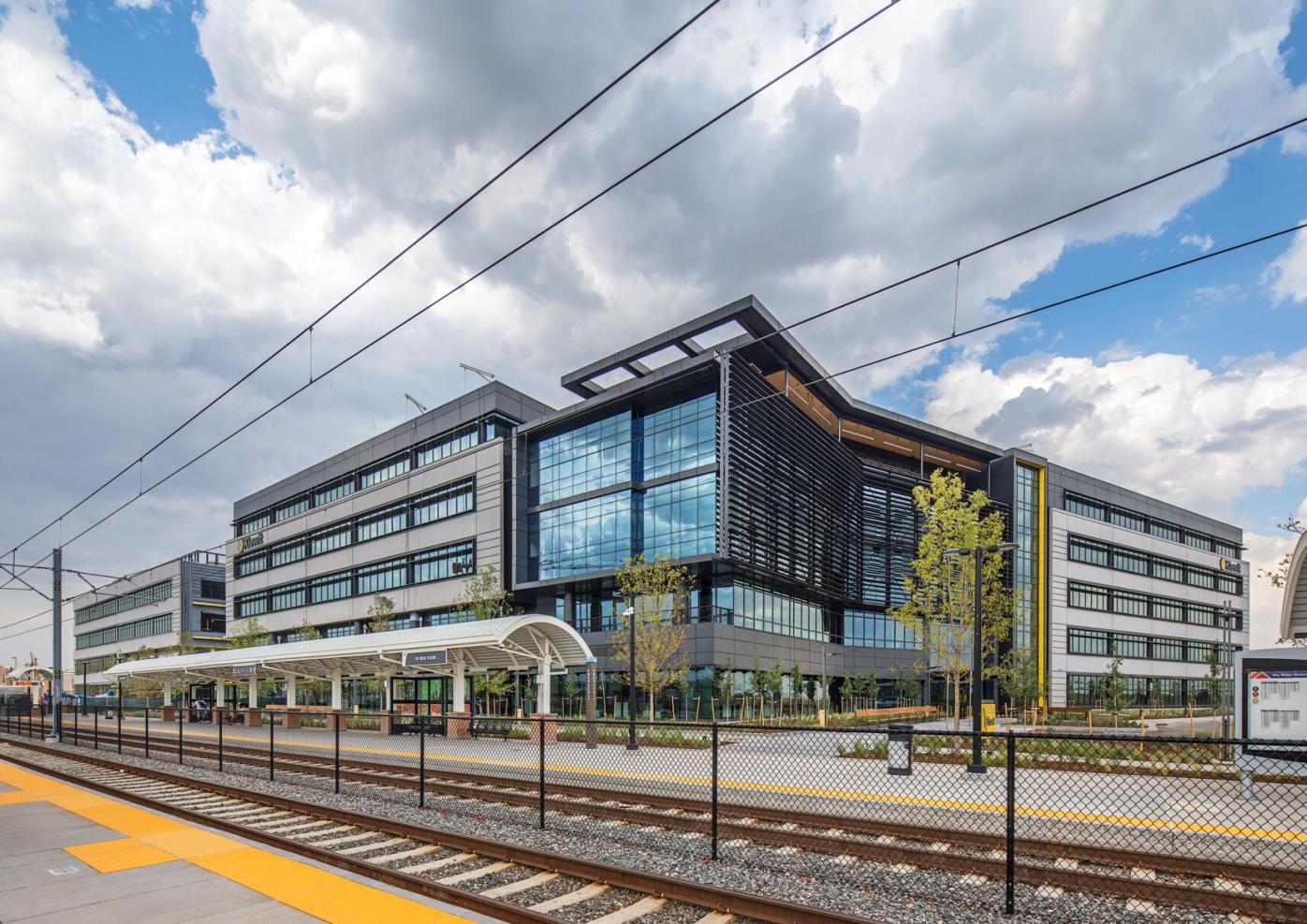 Rendering of the completed, two-building, 400,000-square-foot office campus for Kiewit in Lone Tree. 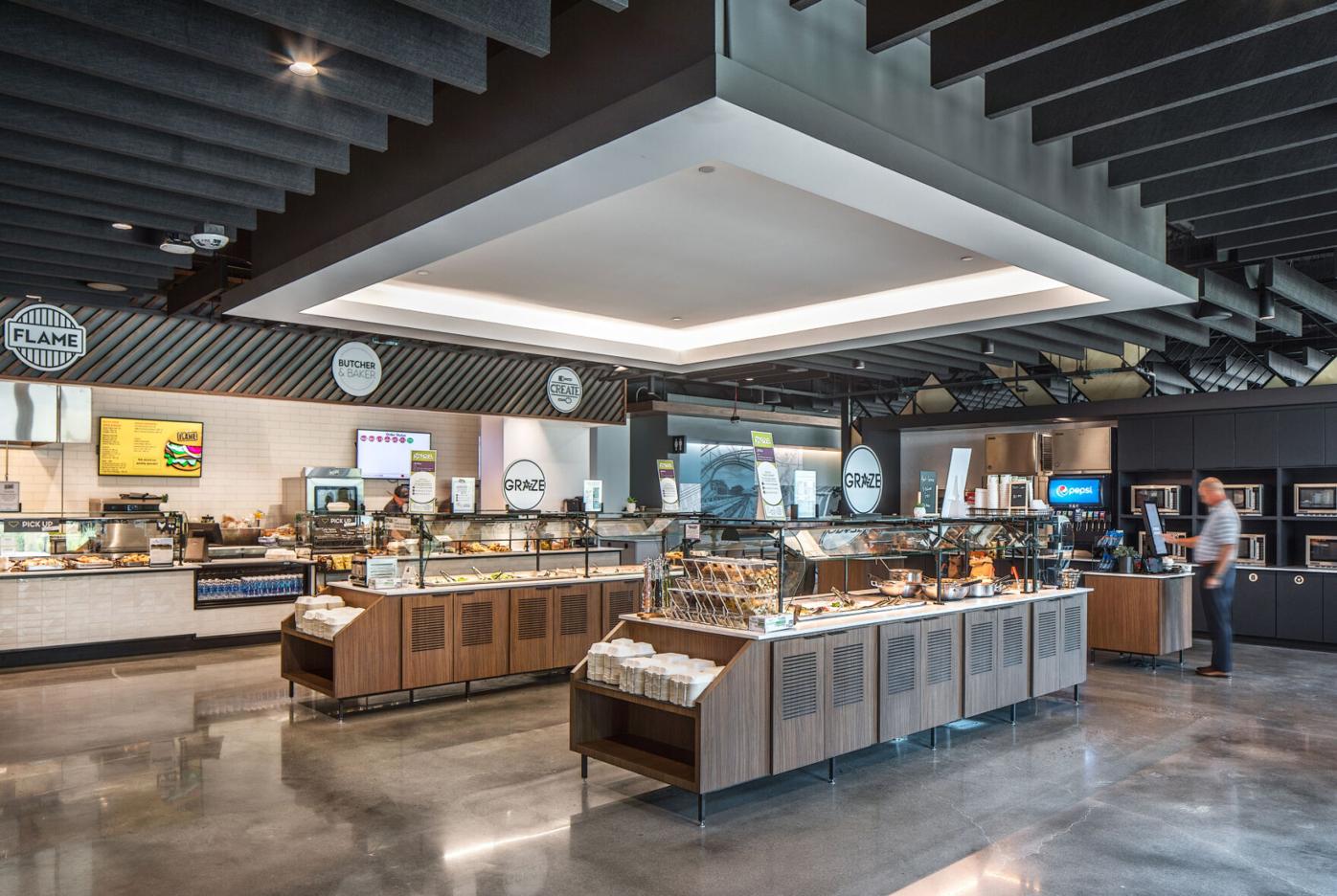 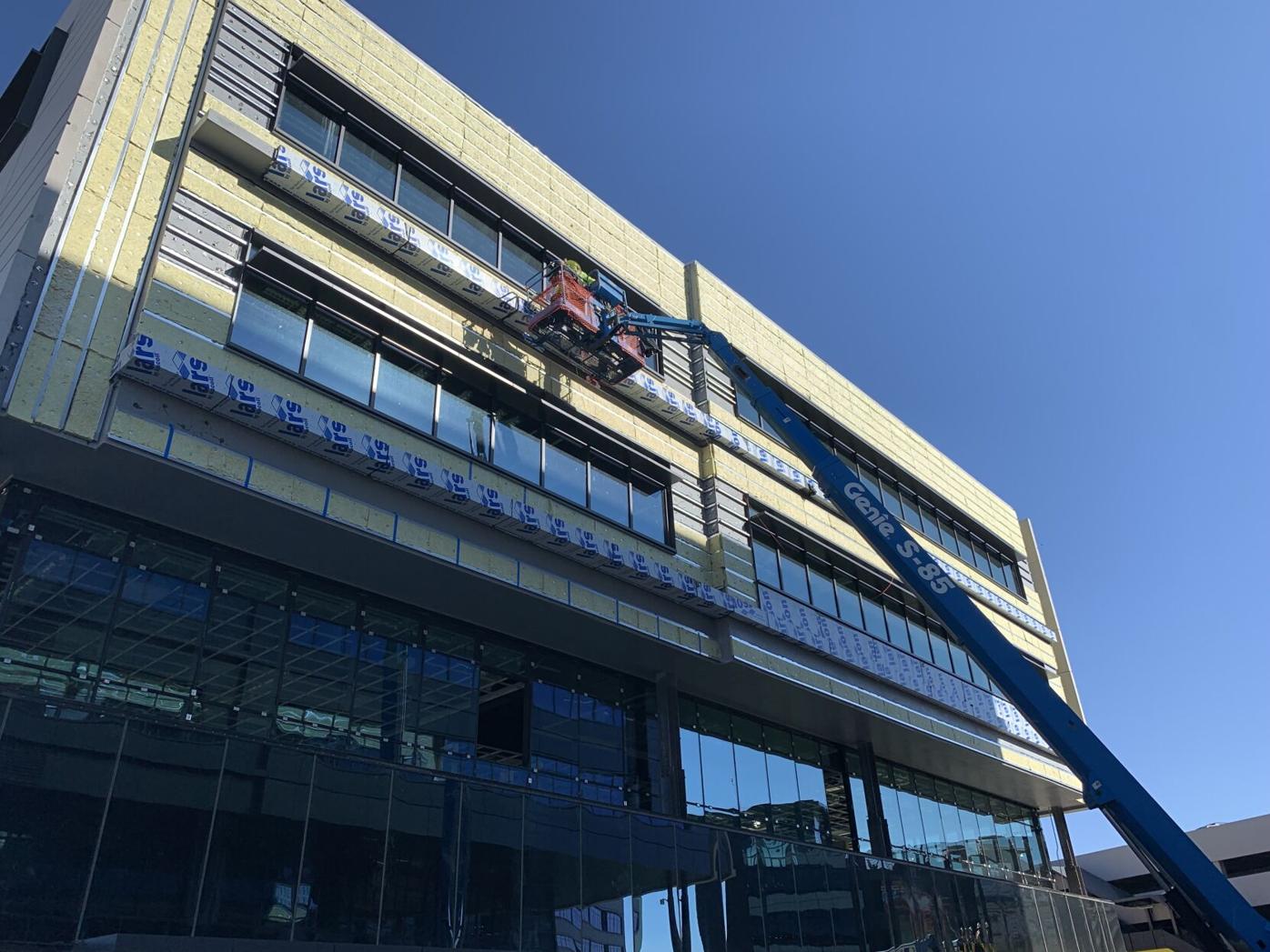 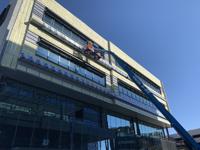 The under-construction second Kiewit headquarters at RTD's Sky Ridge light rail station. It's expected to be finished by Q2 2022. 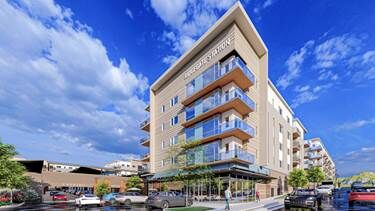 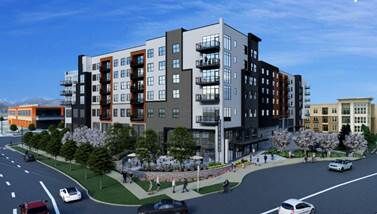 Rendering of the Novus and RidgeGate apartment complex, under construction near the RTD Sky Ridge light rail station.

The new headquarters building of Kiewit. The reflection of the RTD Sky Ridge light rail station is visible.

The lobby of Kiewit headquarters building (K1) in Lone Tree.

Rendering of the completed, two-building, 400,000-square-foot office campus for Kiewit in Lone Tree.

The under-construction second Kiewit headquarters at RTD's Sky Ridge light rail station. It's expected to be finished by Q2 2022.

Rendering of the Novus and RidgeGate apartment complex, under construction near the RTD Sky Ridge light rail station.

There’s more than 10,000 employees working within a half mile of the Sky Ridge Regional Transportation District light rail station off I-25 and Lincoln Avenue, according to city officials.

While it was always the plan for Lone Tree, it took years and a light rail extension to RidgeGate Parkway before the development spurt began in earnest.

That area now houses Sky Ridge Medical Center, a large Charles Schwab campus and, as of Wednesday, the Colorado headquarters of construction giant Kiewit. Apartment buildings are also springing up, as new ones are under construction near both the Sky Ridge and RidgeGate Parkway RTD stations.

“This is the vision we had planned for the community when we annexed the land in 1999,” said Lone Tree Mayor Jackie Millet. “A lot had to happen since then.”

“RidgeGate’s and Lone Tree’s work to get the Southeast Extension done with the Sky Ridge Station was the key to create a great corporate campus site,” said Keith Simon, executive vice president and director of development for Coventry Development Corp., the master community developer for Ridgegate. “And we at RidgeGate then decided to hold the site out of development until we could find the right company. Kiewit was the perfect fit and we were so fortunate to be able to make a deal with them to sell the 12-acre site.”

Kiewit officials agree the site is perfect for its 400,000-square-foot, two-building campus that will eventually house 1,700 employees. Its front door is less than 100 steps from the light rail train platform.

“Most important to us was that access to the RTD light rail, with the ability to get straight to DIA, and located centrally off I-25,” said Chris Stolzer, Kiewit senior vice president, in an interview with the Denver Gazette before a grand opening ceremony Wednesday. “We did a survey and found about 90% of all our employees live within a 15-20 minute commute from here. That was a big driver — we’re close to our employees’ homes.”

Many employees have enjoyed a “reverse commute,” he said. They live downtown, but take the light rail to their place of employment in the suburbs.

“To have an engineering and construction company of this size in our community is remarkable,” Millet said. “They were a part of the community even before this building opened. I know many of them on a first-name basis.”

The campus will allow Kiewit to move most all its metro Denver employees to one location. It currently rents office space in Inverness, Meridian and Centennial.

The $200 million campus might be bigger than the huge construction and engineering organization’s Omaha, Neb. headquarters, Stolzer said. The project broke ground in May 2019 and the first round of employees moved there in July.

“We're always thrilled to welcome new investment and new businesses into our city,” Millet said during the opening ceremony. “But boy, we again punched above our weight with the ability to have Kiewit’s campus here.”

Kiewit has built some of the most iconic projects in Colorado, including “Camp Carson” in Colorado Springs during World War II, which is now Fort Carson, the eastbound Dwight D. Eisenhower tunnel on I-70 in the late 1970s, Union Station and many others worth about $13 billion of Colorado construction, according to Mike Colpack, president of Kiewit’s Design Build Operations.

“This building has truly elevated the work experience for employees and enables us to collaborate, connect and work at a high level,” Colpack said. “I've been with the company 30 years and I've never been in a work environment this good.

“I also think it’s a reinforcement of a long standing commitment we’ve had to the state of Colorado.”

Employees and potential employees will have access to close housing.

Regency Partners is mid-construction on Novus at RidgeGate, a class A 240-apartment development immediately west of the Sky Ridge station.

Across I-25 at the RidgeGate station, Koelbel and Company, and Coventry recently broke ground on a 67-unit multifamily property that will be the first affordable-rent housing project in Lone Tree.

Fansescon said just last week, Regency broke ground on phase I of the RidgeGate Station project on the east side of I-25, which calls for 269 units. It will eventually house 540 apartments.

“We were excited to partner with Coventry on (Novus) as we think it is a fantastic location and we believe the development will create a new standard in the market.”

Colorado’s unemployment rate fell to 5.9% in August, the lowest level since just before the COVID-19 pandemic triggered a stay-at-home order that resulted in massive job cuts.