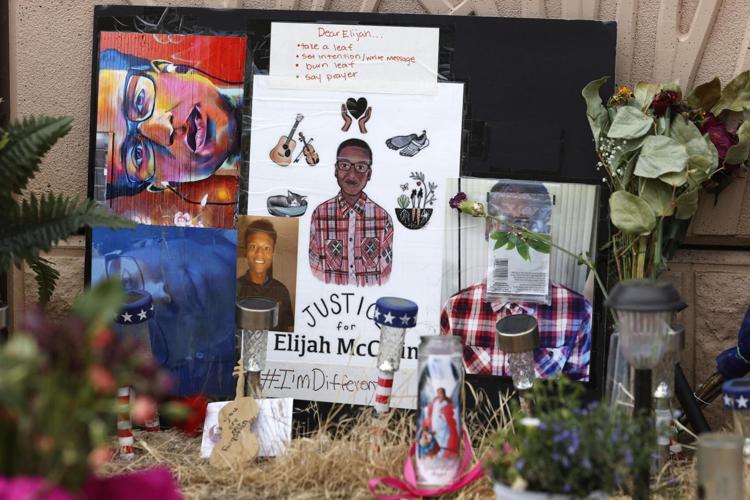 A makeshift memorial stands at a site across the street from where Elijah McClain was stopped by Aurora Police Department officers while walking home on, Aug. 24, 2019. 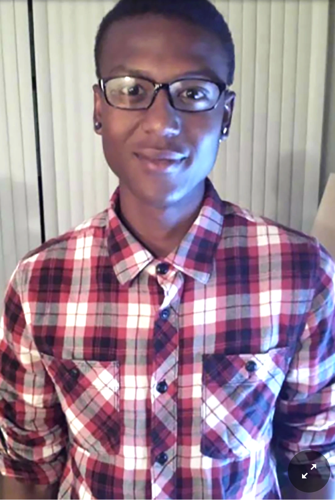 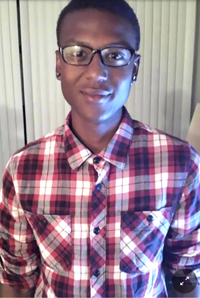 Elijah McClain is shown in a family photo. He died days later after a struggle with Aurora police on Aug. 24, 2019. 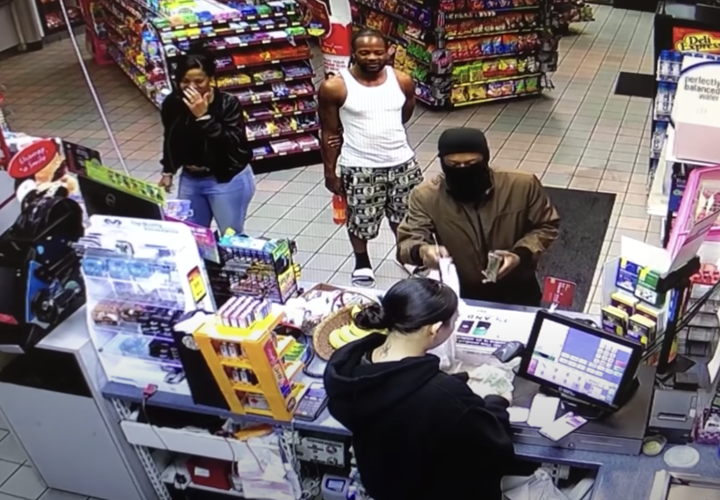 Elijan McClain in a ski mask pays for cans of tea before he left the convenience store and encountered Aurora police nearby on Aug. 24, 2020. 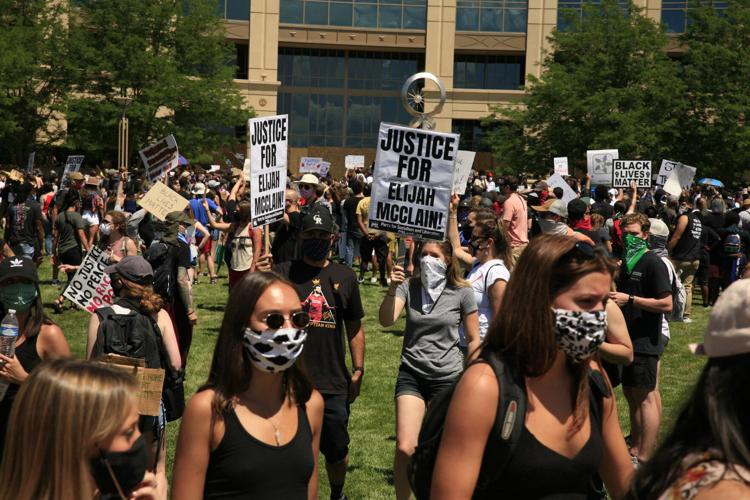 Protesters raise signs as they leave the rally and join a march for Elijah McClain in Aurora, on June 27. 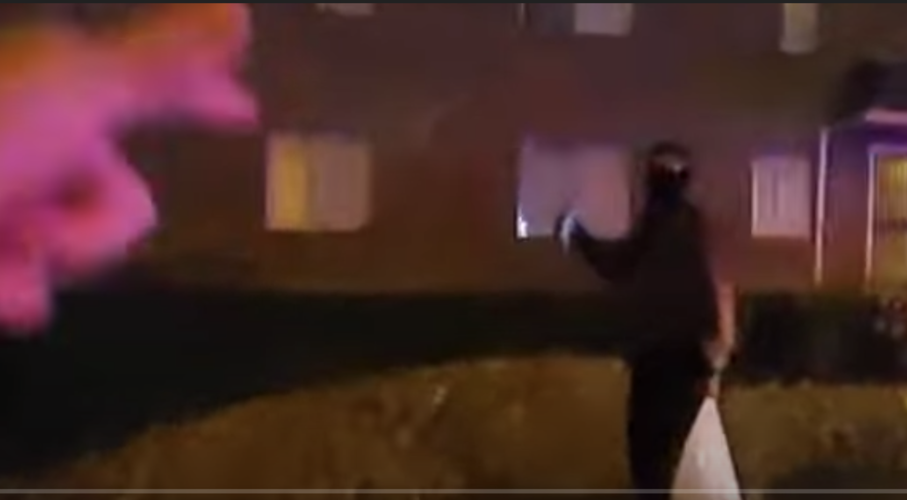 A makeshift memorial stands at a site across the street from where Elijah McClain was stopped by Aurora Police Department officers while walking home on, Aug. 24, 2019.

Elijah McClain is shown in a family photo. He died days later after a struggle with Aurora police on Aug. 24, 2019.

Elijan McClain in a ski mask pays for cans of tea before he left the convenience store and encountered Aurora police nearby on Aug. 24, 2020.

Protesters raise signs as they leave the rally and join a march for Elijah McClain in Aurora, on June 27.

A year ago today, Elijah McClain gathered his three large cans of iced tea from the convenience store counter, the surveillance video showed. Despite the dead summer heat, he wore a brown knit mask that covered nearly his entire head.

He turned and bowed at the waist to the man in dreadlocks and board shorts waiting behind him, as he headed into the Aurora night, the last normal moments in a quirky life.

Officials today are recognizing the one-year anniversary of McClain's encounter with Aurora officers that set in motion his death from the complications of a heart attack a few days later. He was 23.

"To lose a young life is always a tragedy, no matter the circumstances, but how we lost Elijah makes it more than a tragedy, it is an injustice," U.S. Rep. Jason Crow, a freshman Democrat from Aurora, said in a statement Sunday afternoon. "Our community will never be the same, nor should it be. Because the fact is, we failed him. That failure is something that we must reckon with."

In June Crow introduced a bill to improve policing standards and integrity called the George Floyd Law Enforcement Trust and Integrity Act, and he has spoken of McClain's case in debates on the U.S. House.

The walk home for McClain should have been short, but the journey into America's long night of race, justice and police brutality stretches on still.

He was a massage therapist with asthma, who played his violin to soothe the stray cats he loved. He was never known to pose a threat to anyone.

On his walk home that night as he listened to music from his ear buds, someone called 9/11 to say McClain was acting "sketchy," wearing the summertime ski mask, and waving his arms. His family explained later he has anemia and wore the ski mask for warmth. He also wore a jacket zipped up that night.

A struggle ensued and the officers used a since-banned "carotid pressure hold," to restrain the young man who threw up and lost consciousness from the pressure on the neck artery that stems the flow of blood to the brain.

As he struggled, McClain can be heard on body cam audio sobbing and bargaining with the officers:

"I can’t breathe. I have my ID right here... . My name is Elijah McClain. That’s my house. I was just going home. I’m an introvert. I’m just different. That’s all. I’m so sorry. I have no gun. I don’t do that stuff. I don’t do any fighting. Why are you attacking me? I don’t even kill flies. I don’t eat meat."

When paramedics arrived, they administered a 500-milligram dose of ketamine to sedate him. Body camera footage shows McClain go limp before he was put on a gurney and taken away by ambulance.

The autopsy report released in November showed a combination of factors contributed to his heart failure, including his struggle with officers.

As a result, Adams County District Attorney Dave Young decided later that month that criminal charges would not be proven, because there wasn't enough evidence to show officers acted unlawfully in using force on McClain.

Rosenblatt was fired in July over a picture he was sent from the scene where three other officers reenacted the chokehold on McClain. "Ha, ha," he responded.

Two officers who appeared in the photos also were fired and a third resigned before he was fired. Two of the officers in the pictures were at the scene the night police restrained McClain.

All three officers were serving duties that do not allow them to have direct interaction with the public.

The case is the subject of four other pending investigations.

Two weeks ago, state Attorney General Phil Weiser said his office is investigating separate from the Aurora inquiry, after he was tapped to be a special prosecutor by Gov. Jared Polis in June to determine if criminal charges should be filed.

The family is suing the three officers and 10 police department members, a paramedic, the doctor in charge of Aurora Fire Rescue’s ketamine program and the city of Aurora.

“We have filed this civil rights lawsuit to demand justice for Elijah McClain, to hold accountable the Aurora officials, police officers, and paramedics responsible for his murder, and to force the City of Aurora to change its longstanding pattern of brutal and racist policing,” his family said in a statement.

The lawsuit states, “In a span of 18 minutes, defendants subjected Elijah to a procession of needless and brutal force techniques and unnecessary, recklessly administered medication, the combined effects of which he could not survive.”

The civil suit goes on the allege: "For decades, Aurora police have persistently brutalized people of color, and especially Black people, at a rate significantly greater than their proportion in the Aurora community," a theme echoing across the country after the death of George Floyd in Minneapolis and other cases that suggest a systemic pattern of racism.

The city police chief and Mayor Mike Coffman have pledged their full cooperation with the investigations.

“The community deserves answers and Elijah McClain's family deserves closure and none of this will occur until we have a credible independent investigation into the tragic incident of August 24th, 2019,” Coffman told Colorado Politics in an email last month.

Michelle Obama made reference to McClain during last week's Democratic National Convention, and scores of celebrities have spoken out about the case on social media, including Arnold Schwarzenegger, Viola Davis, Padma Lakshmi, Ellen Degeneres and Kevin Bacon.

“The question now, one year later, is how can we bring some solace to those who loved and cared for Elijah," he said. "There are no easy answers, but one thing is clear: we must work to reform the broken system that has allowed racial injustice, police brutality, and widespread inequality to go unchecked for far too long. We must also continue to lift up and tell the story of Elijah’s life, because he was far more than his death and dying words.

"He was a young man who loved animals and helping others, a man who played the violin and was sensitive to the emotions and needs of those around him. Today and in the future, I hope we continue to recognize the man behind the name, Elijah McClain.”

Aurora moves closer to another review of the Elijah McClain case

The city of Aurora on Thursday moved closer to an independent investigation into the police-involved death of an unarmed 23-year-old Black man last August.

Attorney General Phil Weiser on Tuesday acknowledged that his office has opened a separate civil rights investigation on the Aurora Police Department, authority he said comes from 2020 police accountability legislation.

Five community leaders have alleged that the city of Aurora and Interim Police Chief Vanessa Wilson violated the constitutional rights to free speech and assembly of those attending a violin vigil celebrating Elijah McClain on June 27.

The 10-person council on Monday gave the OK to hire Jonathan Smith to start work on the case right away. Smith is based in Washington, D.C., as the Executive Director of the Washington Lawyers’ Committee for Civil Rights and Urban Affairs.