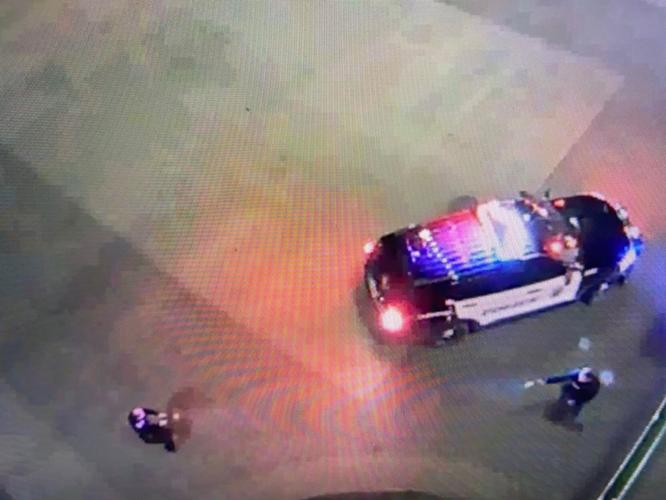 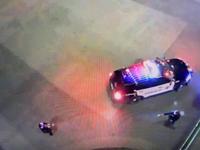 Screenshot from video shows the moment Lakewood police agent Ashley Ferris and gunman open fire on one another at the corner of West Alaska and South Vance the night of Dec. 27, 2021 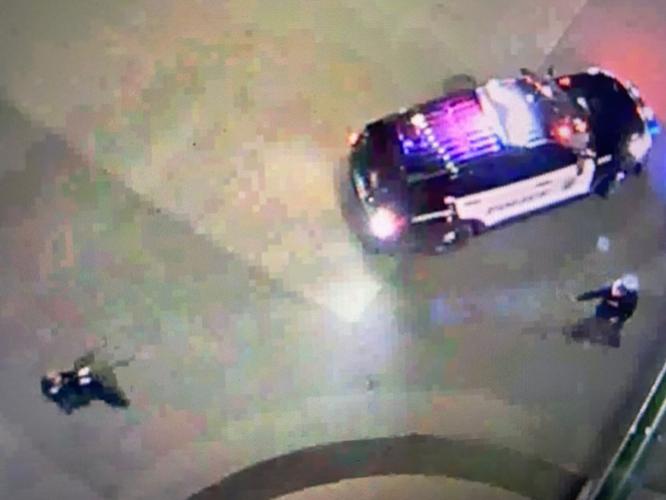 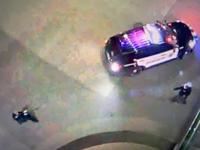 Screenshot from video shows the moment Lakewood police agent Ashley Ferris and gunman open fire on one another at the corner of West Alaska and South Vance the night of Dec. 27, 2021

Newly released video footage from the Dec. 27 murderous rampage shows a dramatic view from above as Lakewood police officer Ashley Ferris and the gunman exchange fire.

The video, which has no audio, shows Ferris exchanging words with a man dressed in black. As the two move closer to each another, they make contact.

Both Ferris and the shooter pull out their guns as the footage shows her backing away. According to a decision letter that cleared Ferris of any wrongdoing, Lyndon McLeod, who had just killed five people, including a Hyatt House hotel clerk, shoots first.

Ferris returns fire and falls backward. Lying on the ground and bleeding from her abdomen, she leans forward and continues to fire as the gunman runs around her police car and collapses. The incident lasts under 30 seconds from the moment he enters the screen and meets Ferris to when he hits the ground.

In the video, McLeod is lying on the opposite side of Ferris' vehicle as another Lakewood officer drags Ferris out of the picture, leaving a trail of blood spilling from her body.

Released along with several videos and 911 calls is nearly 900 pages of  discovery that reveals one of the last remaining mysteries of the bloody rampage — after four grudge murders, why did the gunman kill an innocent desk clerk at Belmar's Hyatt House hotel?

Managers showed police notes from their hotel records of a visit the killer made a month before. They indicated that he was upset when he was told he couldn't use a prepaid gift card for his stay. Police found a receipt from the Hyatt when they searched his van after the rampage.

Video surveillance showed the killer enter the hotel the night of Dec. 27 wearing dark tactical boots and a tactical vest with the word "police" in white on the front. He walked to the front desk and opened fire, killing 28-year-old Sarah Steck. An autopsy showed she died of gunshot wounds to her head and upper chest.

The discovery also reveals the details of a quick visit the gunman made to Ted's Montana Grill at 335 Teller. Witnesses said a man in black went behind the bar, broke a glass and poured himself a glass of whiskey. When the bartender asked if she could help him, he told her that he had just shot 12 people and asked, "Do you want to make it 13?" Before he left, he terrorized restaurant workers, holding a gun to the manager's head and shouting a racial slur to a person in the kitchen.

In the gunman's black Econoline van with Idaho plates, police found dozens of rounds of ammunition, a Sig Sauer handgun, a receipt from the Hyatt, and a handwritten letter and an envelope that appeared to be from a person who was "known to be a member of the Aryan Brotherhood," according to the search warrant.

In a decision letter released Monday, First Judicial District Attorney Alexis King wrote that Ferris and another officer, Brianna Hagan, will not face charges for their use of force against the gunman.