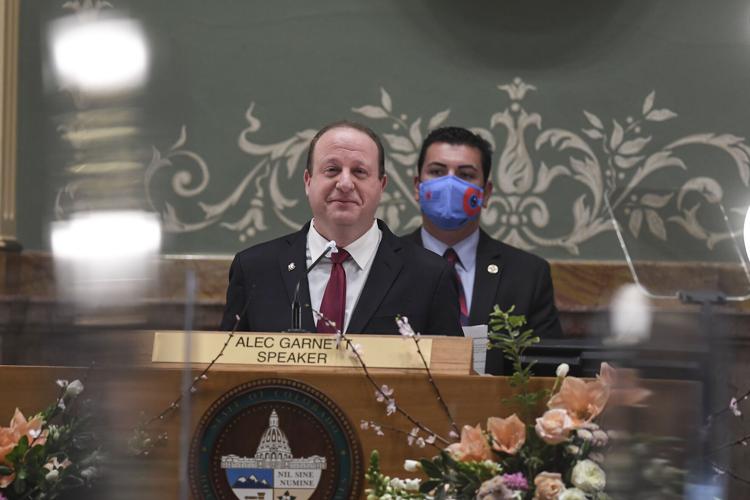 DENVER, CO - FEBRUARY 17: Gov. Jared Polis delivers his state of the state address in front of the House of Representatives at the Colorado State Capitol Building on Wednesday, February 17, 2021. Gov. Polis thanked medical professionals, educators and firefighters for their respective efforts in keeping Colorado moving forward despite the covid pandemic that has affected much of American life. 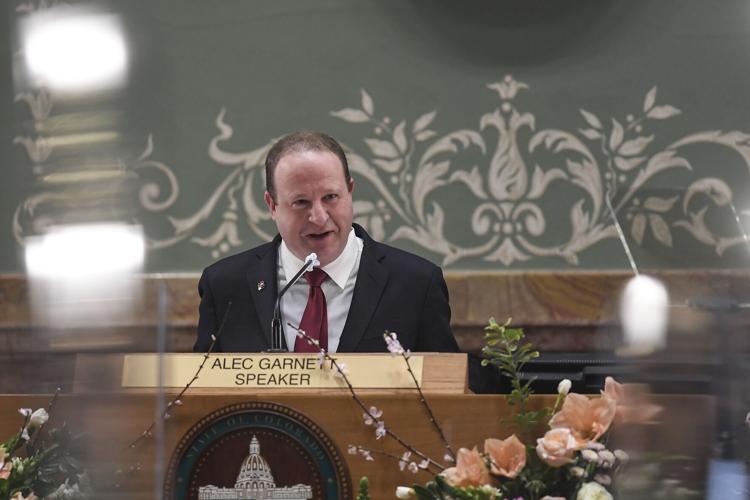 Gov. Jared Polis delivers his State of the State address in front of the House of Representatives at the Colorado State Capitol Building on Wednesday in Denver.

DENVER, CO - FEBRUARY 17: Gov. Jared Polis delivers his state of the state address in front of the House of Representatives at the Colorado State Capitol Building on Wednesday, February 17, 2021. Gov. Polis thanked medical professionals, educators and firefighters for their respective efforts in keeping Colorado moving forward despite the covid pandemic that has affected much of American life.

Gov. Jared Polis delivers his State of the State address in front of the House of Representatives at the Colorado State Capitol Building on Wednesday in Denver.

Colorado businesses and households need immediate relief to recover from the pandemic’s economic pitfalls. That’s what Gov. Jared Polis promised, mostly, during Wednesday’s State of the State address. He suggests:

“All of this, along with the voter-approved reduction in the state income tax, will deliver the most comprehensive tax relief in decades for hardworking Coloradans and small businesses,” Polis said during his address.

He said “relief now” is the top priority if we’re to have a sustainable economy and tax base far into the future. In other words, “relief now” so we can pay for anything later.

This is the proper approach. Pandemic regulations and shutdown orders have caused the temporary and permanent closures of precious businesses. Colorado’s unemployment rate ranks fourth-worst among the 50 states. Too many Coloradans are fighting to survive.

Nothing short of serious tax relief will get the economy off life support and back to producing wealth in the form of health care, education, conventional services, goods and commodities.

Based on his speech, Polis appears ready to make economic recovery his highest priority.

The troubling part of the governor’s otherwise on-the-mark address was his emphasis on climate change mitigation. He mentioned last year’s forest fires, which climate activists theoretically blame on global warming.

“Transitioning to renewable energy isn’t just the right thing for our health and safety — it’s the smart thing for jobs and our economy,” Polis said.

It is hard to see it that way, as more than 250,000 Colorado jobs rely directly or indirectly on the state’s massive oil and gas industry — even though relatively few Coloradans see it that way. Colorado is the country’s fifth-largest producer of oil and gas.

Developing renewable energy is a welcome and important long-term endeavor. We should want more competing options for Colorado and the rest of the country to power businesses, vehicles and homes. Climate change is real, and we must work to reduce humanity’s contributions to it.

Climate change is not, however, an imminent crisis on par with the lagging economic collapse threatened by COVID-19. In a genuine long-term recession or depression, we would lack the time, energy and luxury to entertain notions of controlling the climate from Denver and Washington.

“The private sector is already turning away from fossil fuels and looking forward to a clean energy future,” Polis said.

Exactly. Consumers want clean, affordable and sustainable energy. Polis, a successful business entrepreneur, knows better than most how the free market provides what consumers want and need without government mandates.

Early internet consumers wanted instant electronic greeting cards, and Polis delivered them. Consumers wanted more efficient and affordable delivery of fresh flowers, so Polis founded ProFlowers.com. Those innovations, like nearly all others, did not require the government to banish more traditional competing products and services.

As seen in Texas this week, consumers who heat with wind and solar also need oil and gas — traditional, tried-and-tested, reliable fuels that provide power in the summer and winter and whether the sun is shining or the wind is blowing.

In times of crisis, Polis understands the need to let consumers and small businesses breathe by easing their tax burdens. While restaurants, bars, resorts, and countless varieties of other businesses support our state, no industry is more important to our economy than traditional energy production. At this juncture, few if any businesses — including those producing alternative energy — could survive without traditional fuels.

Polis and the Legislature should set aside immediate plans to further regulate, tax, or otherwise impede the production of oil, natural gas, coal or other resources that support Colorado’s economy. They would do everyone a favor by reducing barriers to energy production until we are long past the pandemic.

If we could flip a switch and stop climate change tomorrow we would not eliminate forest fires, hurricanes, floods or tornadoes — all of which predate anthropogenic climate change by centuries. It would not create a public health and safety panacea or substantially boost “jobs and our economy.” Those are fine Democratic talking points but not part of “relief now” during a health crisis wreaking economic havoc.

Gov. Polis should keep his administration and the Legislature focused on the public’s physical health and the economy’s survival and recovery. Let the market provide clean, modern, affordable energy as demand and technology converge. In the meantime, allow conventional energy to help provide for Colorado’s traditional and enviable level of health, safety and security. And, by all means, enact the promised tax cuts.

The Gazette Editorial Board