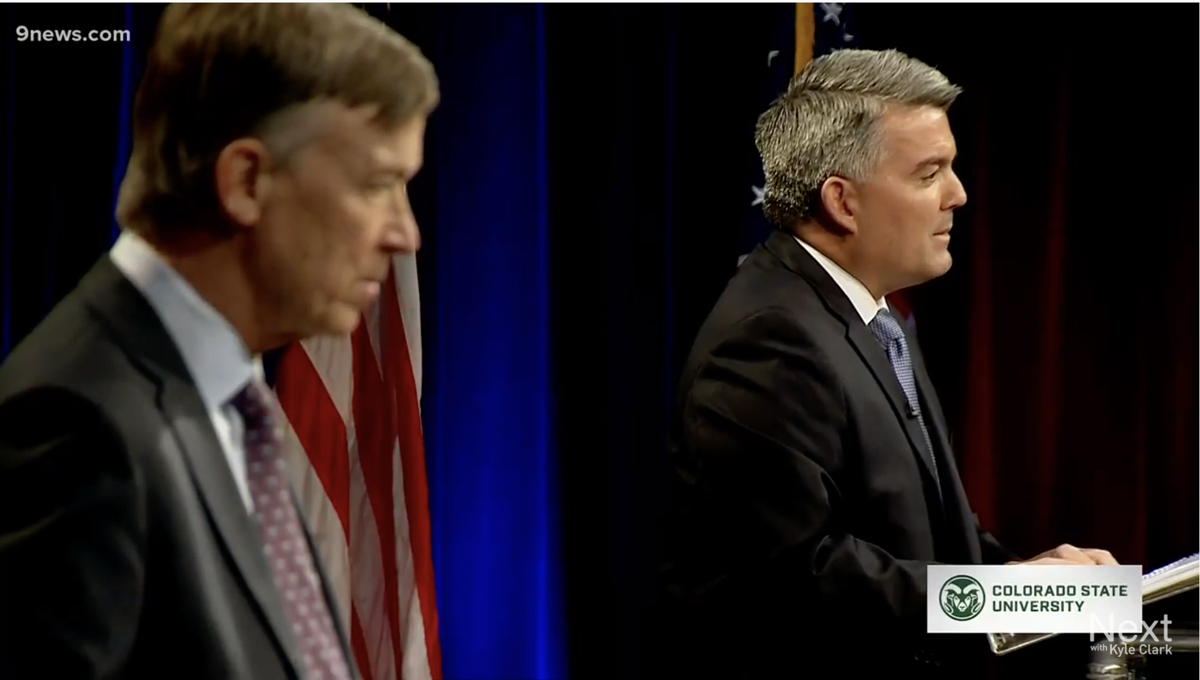 Former Gov. John Hickenlooper, left, debated U.S. Sen. Cory Gardner in Fort Collins on Tuesday night. It was the last meeting for the candidates before the Nov. 3 election.

Former Gov. John Hickenlooper, left, debated U.S. Sen. Cory Gardner in Fort Collins on Tuesday night. It was the last meeting for the candidates before the Nov. 3 election.

The drinks became a metaphor for a debate that exposed Hickenlooper for a campaign and career of saying one thing and doing another — for reliably wanting to have it both ways. It works for a person with unilateral control of an entity — one who can give an order and quickly reverse it — but not for someone in a job that requires constant collaboration and persuasion.

By drinking the metaphorical Kool-Aid, Gardner argued, the once moderate Hickenlooper became radically green. He wants environmental regulations more extreme than those proposed in the far-left Green New Deal.

The Kool-Aid jab came after a moderator asked Hickenlooper why environmentalists should trust him after he drank genuine fracking fluid, thumbing his nose at Coloradans who fear the fluid might contaminate water. Through strong and polite questions, Denver 9 News moderators Kyle Clark and Marshall Zelinger wanted to know which Hickenlooper voters would get.

They never received a straight answer. Hickenlooper’s refusal to directly answer several big questions about himself, and his self-conflicting behavior, showed the public again how he often wants to have it both ways.

Journalist Ernest Luning of Colorado Politics asked why Hickenlooper signed gun bills in 2013 and then told a group of sheriffs — in what he thought was a private setting — he only did so because of a staffer who made a commitment.

“Saying one thing publicly and then privately saying the opposite. That’s something you accuse Cory Gardner of doing. How are you any different?” Luning asked.

Hickenlooper used his time to talk about gun control and Gardner. Zelinger called him on it.

“He (Luning) asked an introspective question about yourself and you spent the entire time telling me about Cory Gardner. The question was about you,” Zelinger said.

The fracking fluid and trust question referred to then-Gov. Hickenlooper taking a gulp of fracking fluid, back in the days he thought Colorado energy jobs mattered and he defended oil and gas extraction.

“We sat down with executives from Halliburton. We did drink it around the table, almost ritual-like in a funny way,” Hickenlooper said during a Senate Energy and Natural Resources Committee hearing in 2014.

Gardner said Hickenlooper’s newfound environmental extremism would lay off 230,000 Coloradans by imposing rules that would devastate energy production, the state’s third-largest industry. Gardner explained Colorado has “two John Hickenloopers,” and no one knows which would serve in the Senate.

Hickenlooper didn’t help himself on that point. During the debate, he said members of Congress need to sit down together and negotiate. Legislative “Kumbaya” sounds good, but not coming from Hickenlooper. Just last year he said cordial collaboration was fine, but it wasn’t for him.

“Senators sit and debate in small groups, which is important, right? But I’m not sure that’s my — I’m a doer. That’s what gives me joy,” Hickenlooper said last year while running for president, right after saying “I’m not cut out to be a senator.”

Clark reminded Hickenlooper about saying he would not make a good senator. He wanted to know the last time Hickenlooper had a job in which he was not the boss, and “were you any good at it?” Good questions. A senator, unlike a governor or president, is not the boss of an institution. He is, as Hickenlooper said, someone who sits in small groups to negotiate.

Hickenlooper said his work as a geologist was his last job working for a boss, and he was good but not great. He found his professional stride as the top boss at the first brewery he founded in lower downtown Denver.

The whole thing only bolstered his case from last summer: Hickenlooper lacks legislative characteristics. He is an executive. Gardner pounced.

“He wants to go to Washington not realizing he works for the people,” not for himself, Gardner said. Gardner repeated his mantra that Hickenlooper is in it for himself.

Hickenlooper will go down as a governor with an eight-year record of mixed success and failure but, nevertheless, a man with skills suited for the job. He was a doer, with an ability to delegate tasks and make open-and-shut decisions.

Tuesday’s debate underscored the difference between executive work and legislative work. The former requires authority a senator does not have. The latter requires a framework of mostly consistent principles that drive policy goals. That’s why one Hickenlooper wants a Senate seat, and the other shows and tells us he’s not cut out for the job.

The Gazette Editorial Board