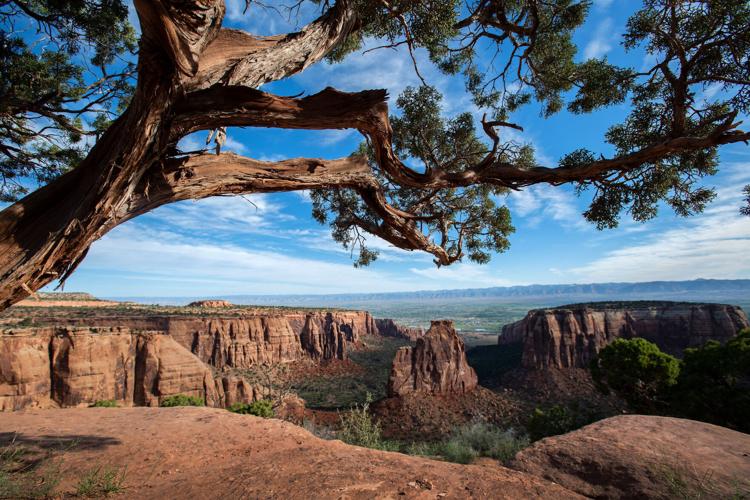 The Independence Monument is framed by a Utah juniper tree in Colorado National Monument. 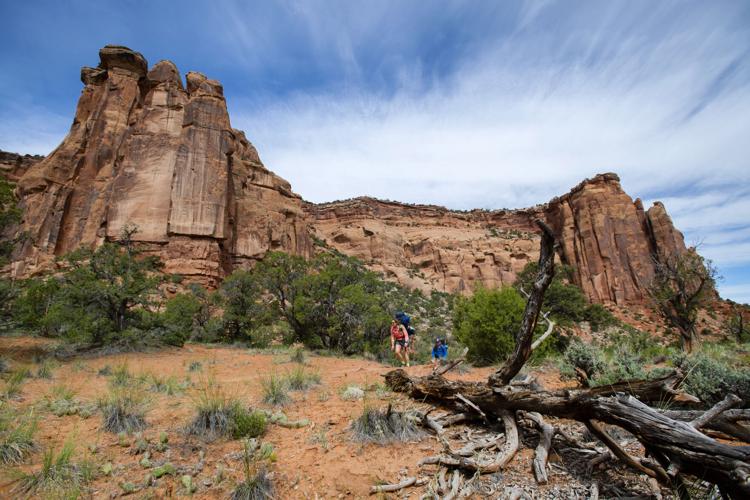 Hannah Grinblatas, left, and Ryan Rilinger of Boston hike the valley floor along the Monument Valley Trail in Colorado National Monument. The couple spent the night near Independence Monument. 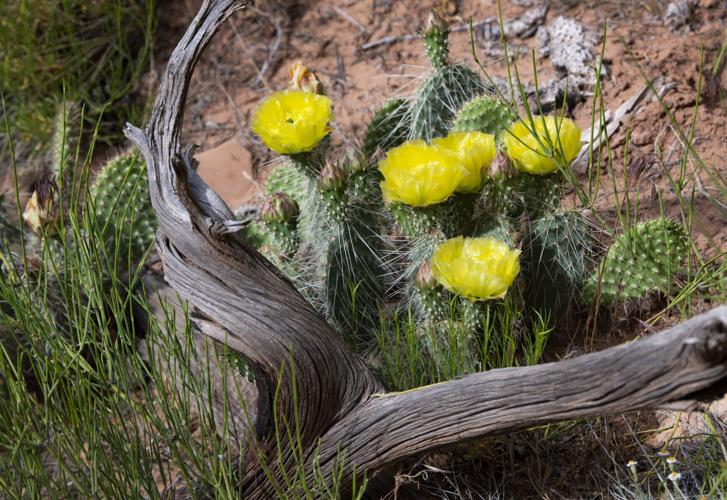 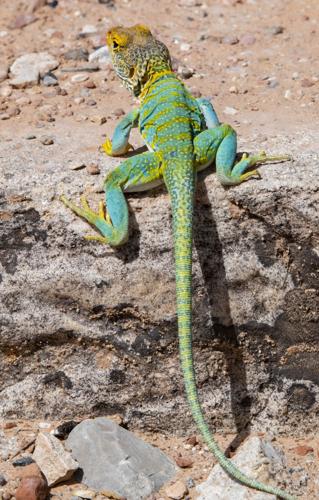 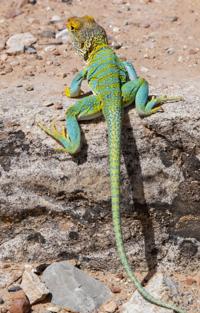 A collared lizard basks in the sun on the valley floor in Colorado National Monument. 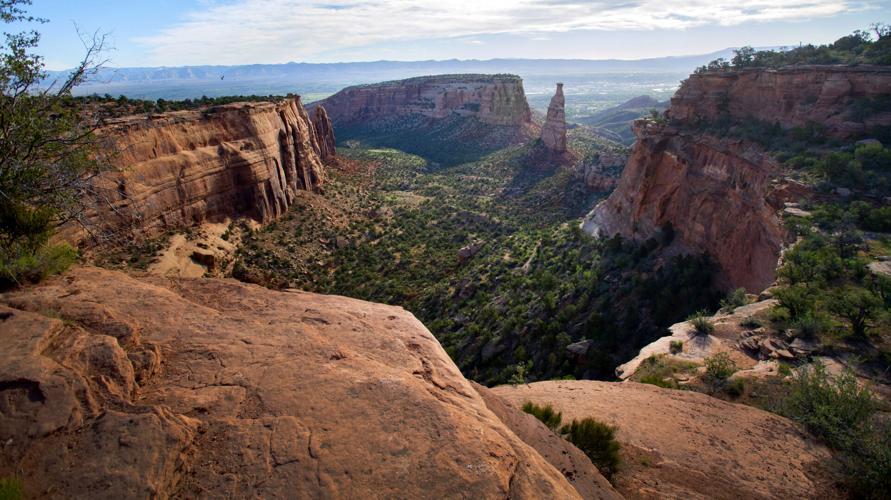 Independence Monument stands in the middle of the Monument Canyon with the Bookcliffs in the distance. 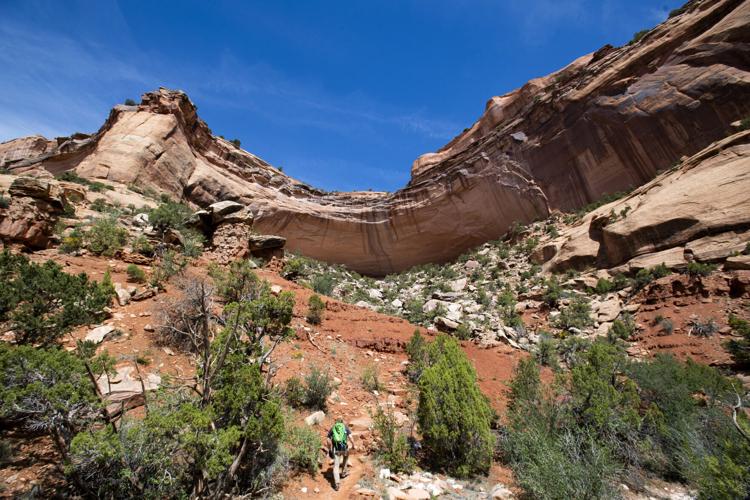 A hiker begins the 600-foot ascent from Monument Canyon to the plateau above in Colorado National Monument. 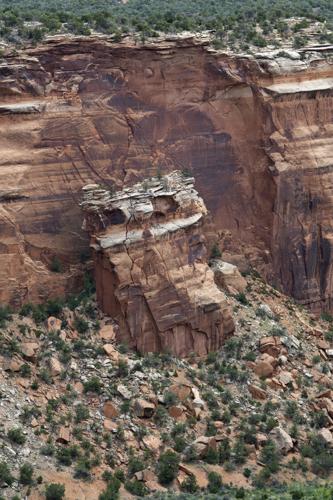 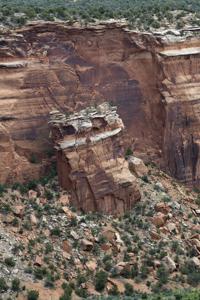 Fallen Rock on the side of Monument Canyon can be seen from the Fallen Rock Overlook along Rim Rock Drive in Colorado National Monument. 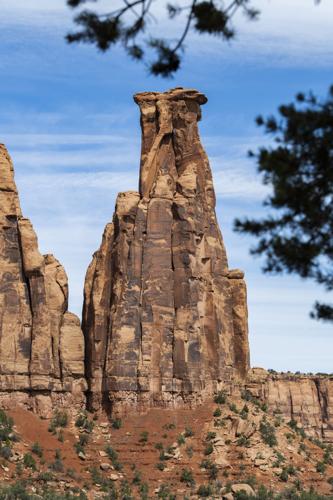 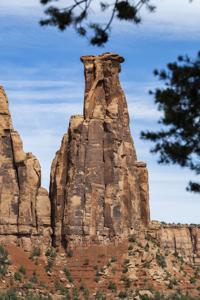 Kissing Couple as seen from the Monument Canyon Trail in Colorado National Monument. 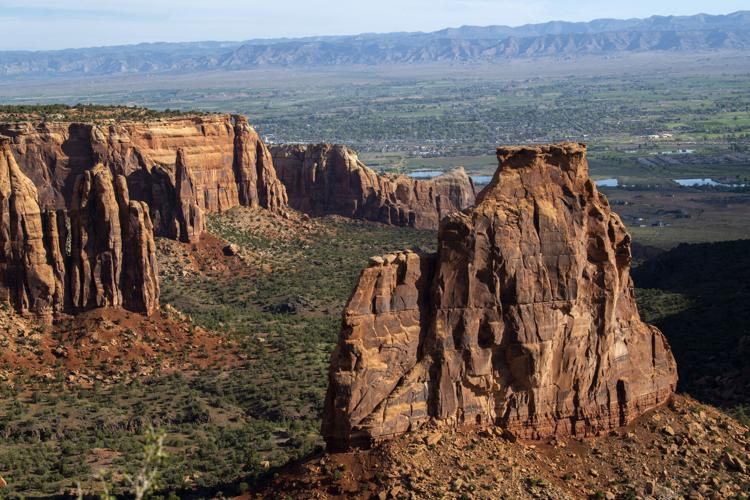 The Bookcliffs and the town of Fruita can be seen from the rim of the Colorado National Monument. 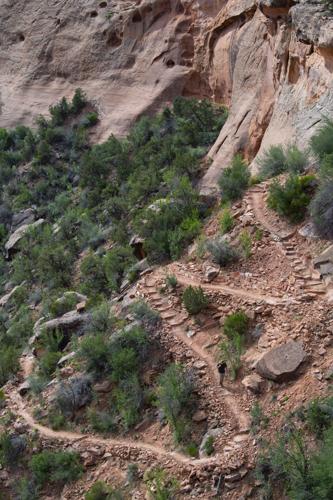 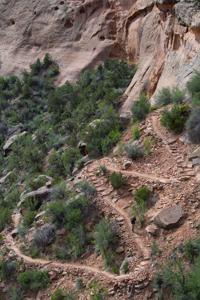 A hiker makes his way down the 600-foot descent on the Monument Canyon Trail into the canyon below. 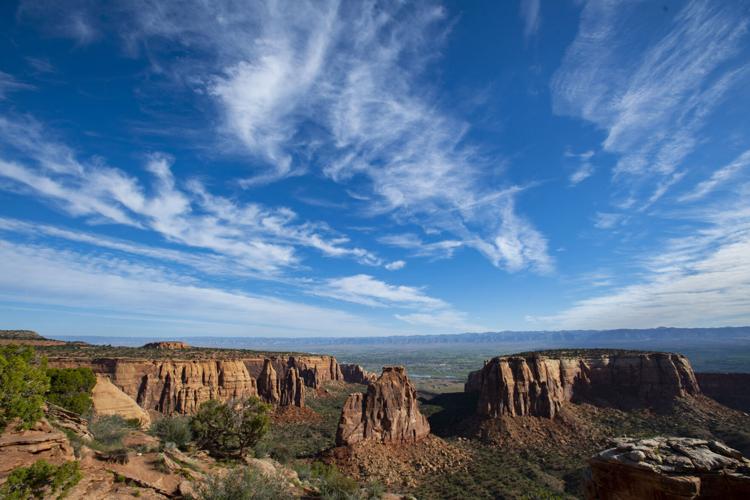 Independence Monument stands in the middle of the Monument Canyon with the Bookcilffs and the town of Fruita in the distance.

Hannah Grinblatas, left, and Ryan Rilinger of Boston hike the valley floor along the Monument Valley Trail in Colorado National Monument. The couple spent the night near Independence Monument.

A collared lizard basks in the sun on the valley floor in Colorado National Monument.

Fallen Rock on the side of Monument Canyon can be seen from the Fallen Rock Overlook along Rim Rock Drive in Colorado National Monument.

A hiker makes his way down the 600-foot descent on the Monument Canyon Trail into the canyon below.

Independence Monument stands in the middle of the Monument Canyon with the Bookcilffs and the town of Fruita in the distance.

FRUITA • When Arlene Jackson thinks of John Otto, she thinks of other people. She thinks of everyone else who followed the man to Colorado National Monument, this wonderland of rock spanning the state’s western edge.

Otto is regarded as the founding father of Colorado National Monument, which was added to the National Park Service in 1911. Visitors have him largely to thank — visitors like Cindy Engelman, whom we find admiring the view from one of the overlooks along Rim Rock Drive, the 23-mile road touring this dreamscape from above.

“Amazing, isn’t it?” the Palmer Lake woman remarks. “Never get tired of it.”

Of course she is amazed by Independence Monument, the most prominent monolith soaring some 500 feet above the valley floor. Independence is but one sandstone marvel here, rising in an ancient environment sculpted by forces over millions of years.

It is an environment of “hanging canyons,” as one overlook sign calls them — hanging, it seems, like the distant Book Cliffs. Another sign remarks on the “pallet of color” here: the red of the folding gorges, the green floor, the blue sky, the electric blue and yellow collared lizard, the Technicolor wildflowers that somehow burst despite the meager rains. When he first laid eyes on it, Otto swore he peered into “the heart of the world.”

Engelman never gets tired of it — while many often miss it.

A ranger in the visitor center reports knowing lifelong residents of the Grand Valley who’ve never ventured to the crags that are their home’s backdrop. As for the Front Range masses, perhaps they too often continue on Interstate 70 west toward more famous geology.

The monument “catches a lot of people by surprise,” Jackson says. That has to do with the name, she thinks. It seems people are expecting a single monument, “a statue or something,” Jackson says.

“Many people will say, ‘I drive up Interstate 70 all the time, and this time we had time to stop, and oh, my gosh, where has this been hiding the whole time?’”

It was hidden from most of the valley’s European settlers by the time the intrepid, scraggly Otto found it in 1906.

“I’m going to stay and promote this place,” he declared, “because it should be a national park.”

He admitted: “Some people think I’m crazy, but I want to see this scenery opened up to all people.”

They thought him crazy enough to be briefly incarcerated in an insane asylum once. His passion was known to border on harassment.

“To keep Otto out of the press, he was arrested three times as a threat to state governors,” writes Alan Kania in the monument’s “Images of America” history.

Going camping? Here’s what you need to know when it comes to fires

Otto, indeed, found his way into the press. He found his way with his own pen — he wrote lengthy, rambling pleas to join his cause — and by the pen of others.

From long, lonely, ax-swinging days of trail-building in the wilds thought to be untamable, Otto would venture down into town for provisions and promotions. He was said to be met by laughter and ridicule.

Eventually, the chamber of commerce appointed a committee to see what he was up to.

“(W)hen the committee returned,” Walker wrote, “the tales it told were like unto those related by the spies sent by the children of Israel to view the promised land of Canaan.”

The tales were enough to finally get the president’s attention. William Howard Taft proclaimed Colorado National Monument on May 24, 1911.

A month later, Otto married Beatrice Farnham at the base of Independence Monument, the tower that Otto scaled to wave an American flag (climbers continue the July 4 tradition).

It didn’t take Farnham long to leave Otto. “I tried hard to live his way, but I could not do it,” she said. “I could not live with a man to whom even a cabin was an encumbrance.”

Less ventured side of Pikes Peak opens for season

Otto maintained his hardscrabble lifestyle while serving as the monument’s custodian, a job that earned him $1 a month. His sights were set on expanding access beyond foot and horse only.

Roads were being built across national parks at the time — development that would ramp up with the Depression-era Civilian Conservation Corps. Up to 800 of those men would be employed for the precarious construction of Rim Rock Drive.

But Otto would not stay around to see the job done. He disagreed with the road’s alignment and with bureaucracy in general.

With Taft’s signature, “Otto got what he wished for,” Jackson says. “And then the government started to say, We’re going to do it this way and not your way, and all of a sudden, his vision started to diverge from what the federal government wanted to do.”

At least one part of his vision is being realized: People are coming for the scenery. While not nearly in the numbers of sister parks on the Colorado Plateau, visitation has been steadily increasing here. The count of nearly 500,000 last year is up from 391,075 tallied in 2016.

“Quite honestly, our road is a little two-lane, and we have small pull-outs,” she says. “We would have a lot of difficulty if we got a lot of additional visitors. ... I love having new people come here and experience this place, but I don’t want it to all of a sudden explode.”

Nor does a couple we come by on the trail, two of the few we spot this afternoon.

“We’re trying to find something not as popular,” says Steve Levy, visiting from Summit County.

The most popular way to visit Colorado National Monument is to drive the 23-mile Rim Rock Drive, between Grand Junction and Fruita. Overlooks along the way, as well as trailheads to descend to the valley floor. Vehicle entry $25. More tips and information at: www.nps.gov/colm/index.htm

For a video from Colorado National Monument, go to gazette.com.

Historic cabin near Colorado ghost town could be overnight destination

Near one of Colorado's most-visited ghost towns, land managers are looking to make a historic cabin available for group overnights.