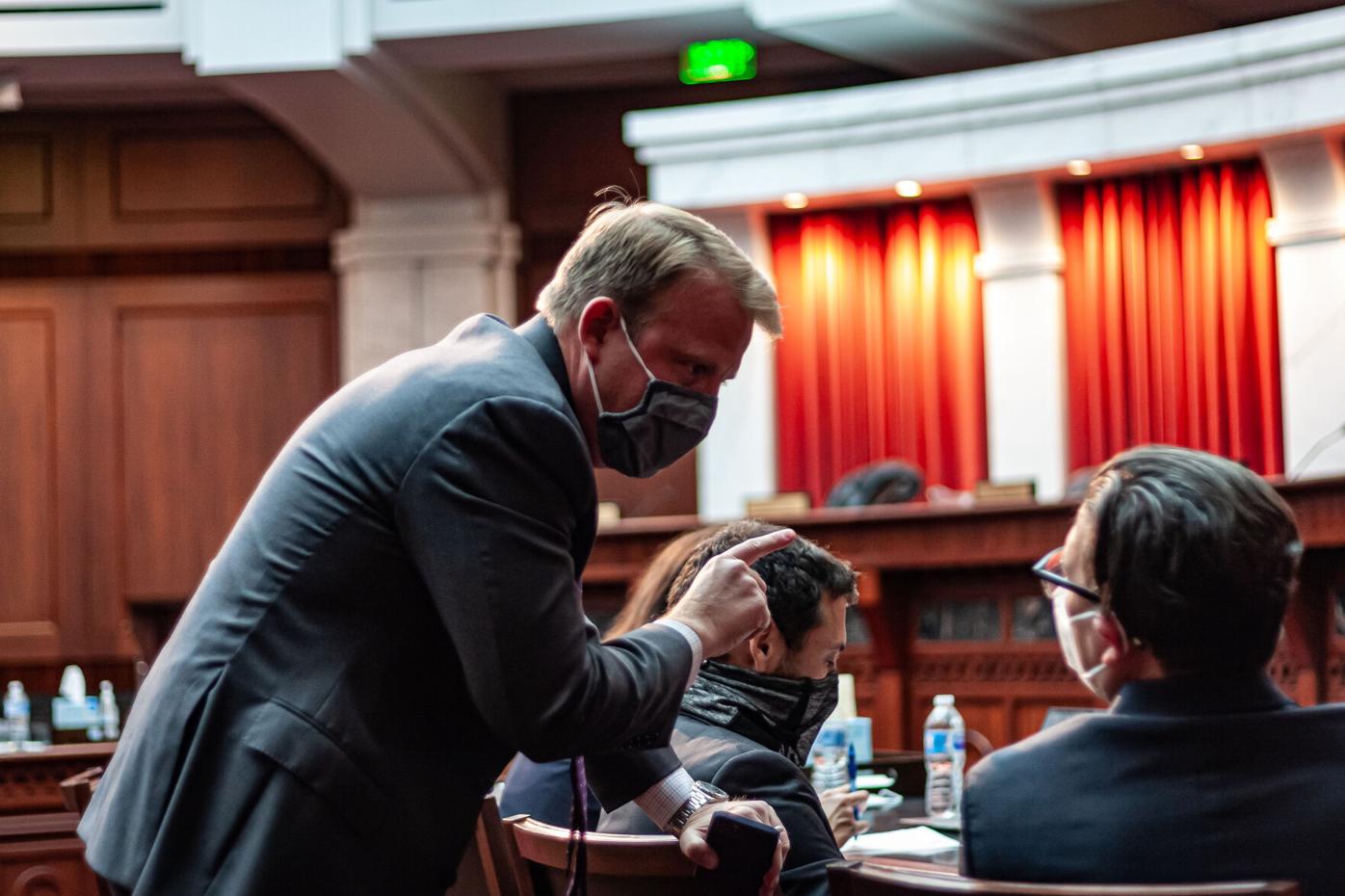 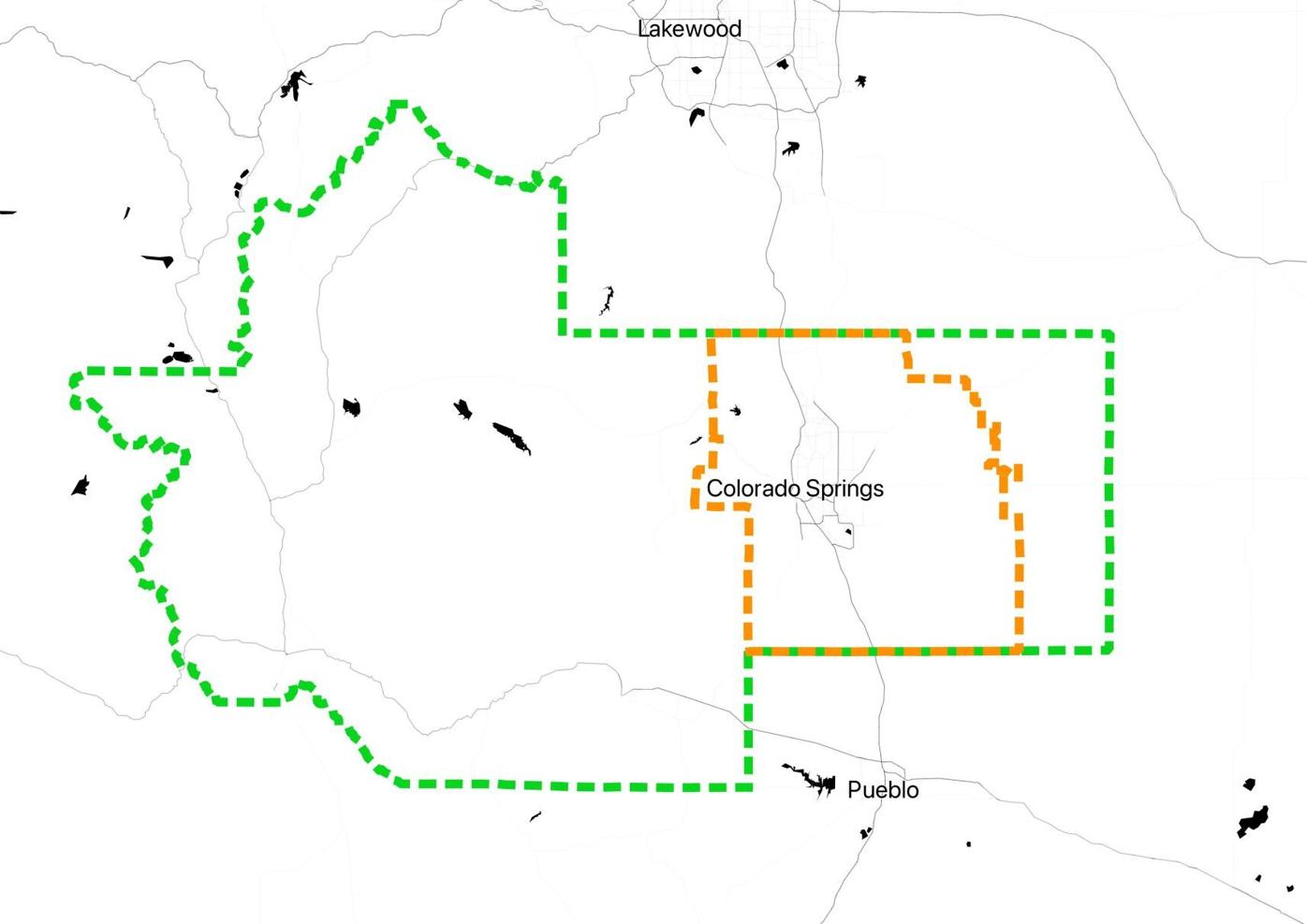 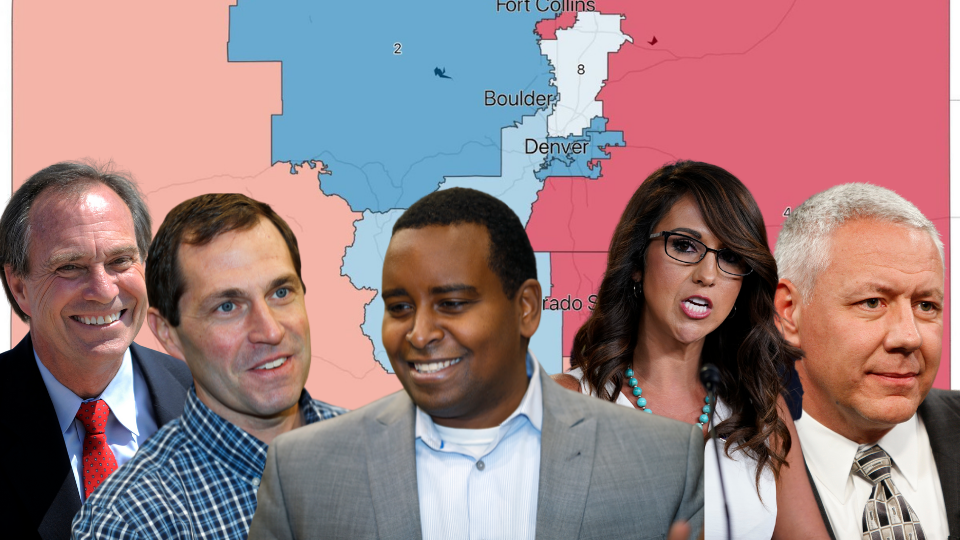 photo illustration by Emily Ferguson, Colorado Politics Democratic U.S. Reps. Ed Perlmutter, Jason Crow and Joe Neguse and Republican U.S. Reps. Lauren Boebert and Ken Buck, left to right, are among the seven Colorado House incumbents with reason to celebrate after the state’s independent redistricting commission finalized a congressional map on Sept. 28, 2021, ahead of the 2022 election. 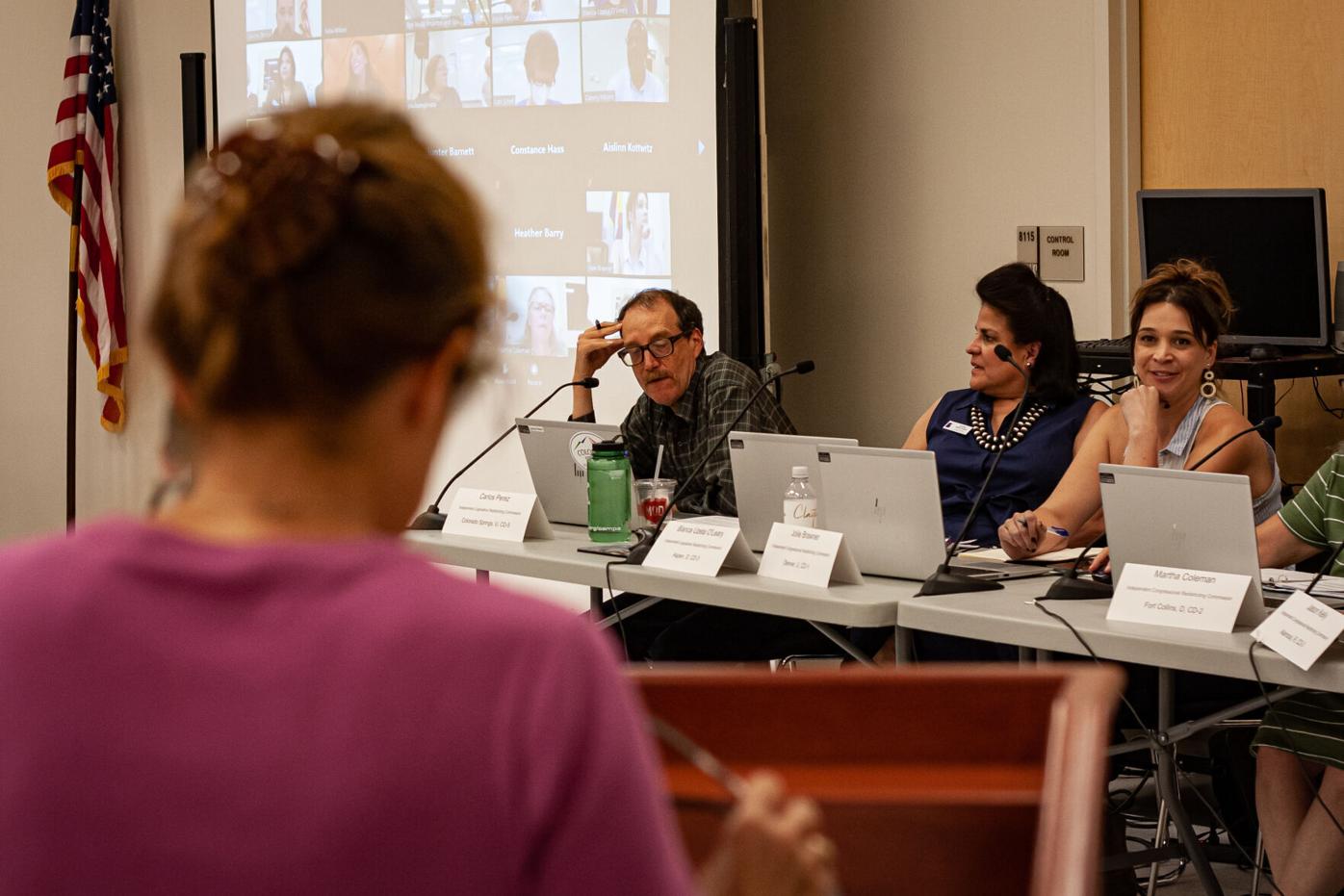 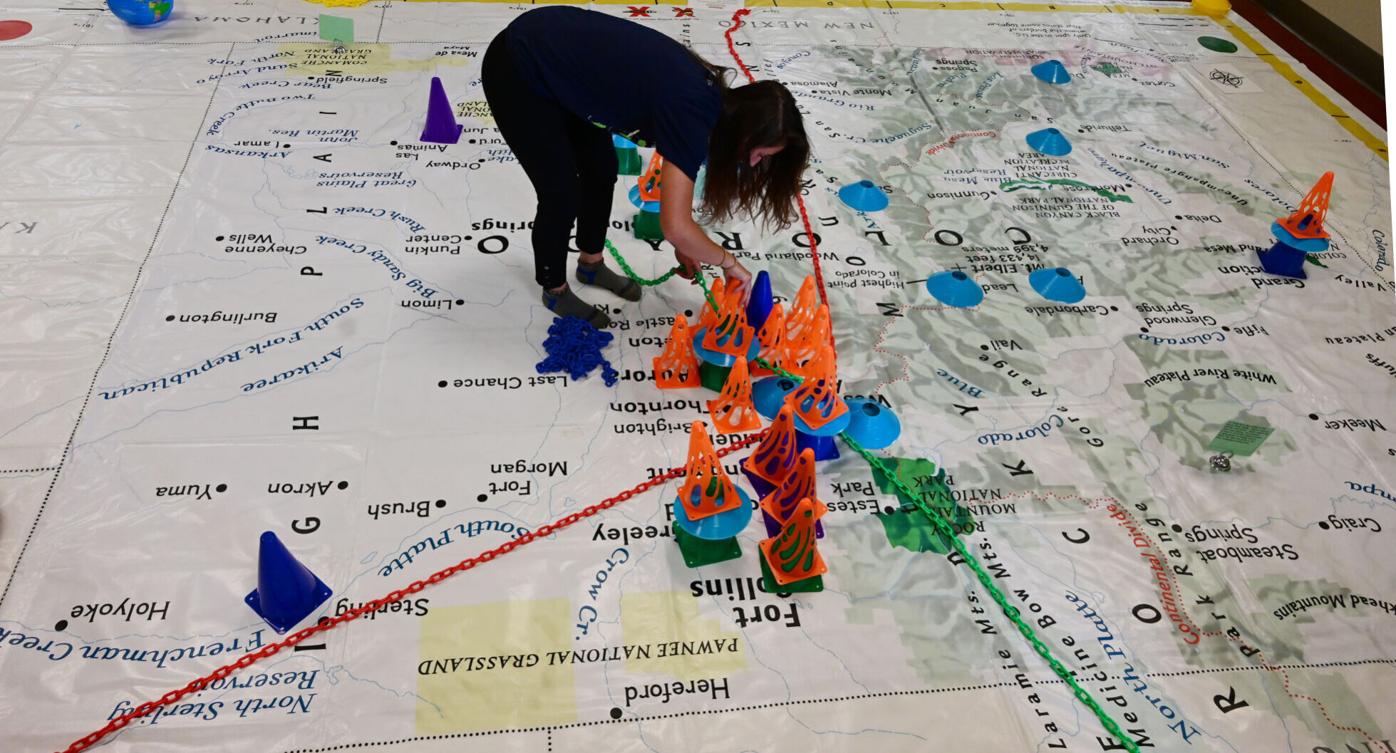 colorado politics file photo Alana Kornaker, an intern with UCCS GeoCivics, sets up an educational map of Colorado with cones to show areas of growth through history before a meeting of the state’s independent congressional redistricting commission at UCCS Aug. 5. 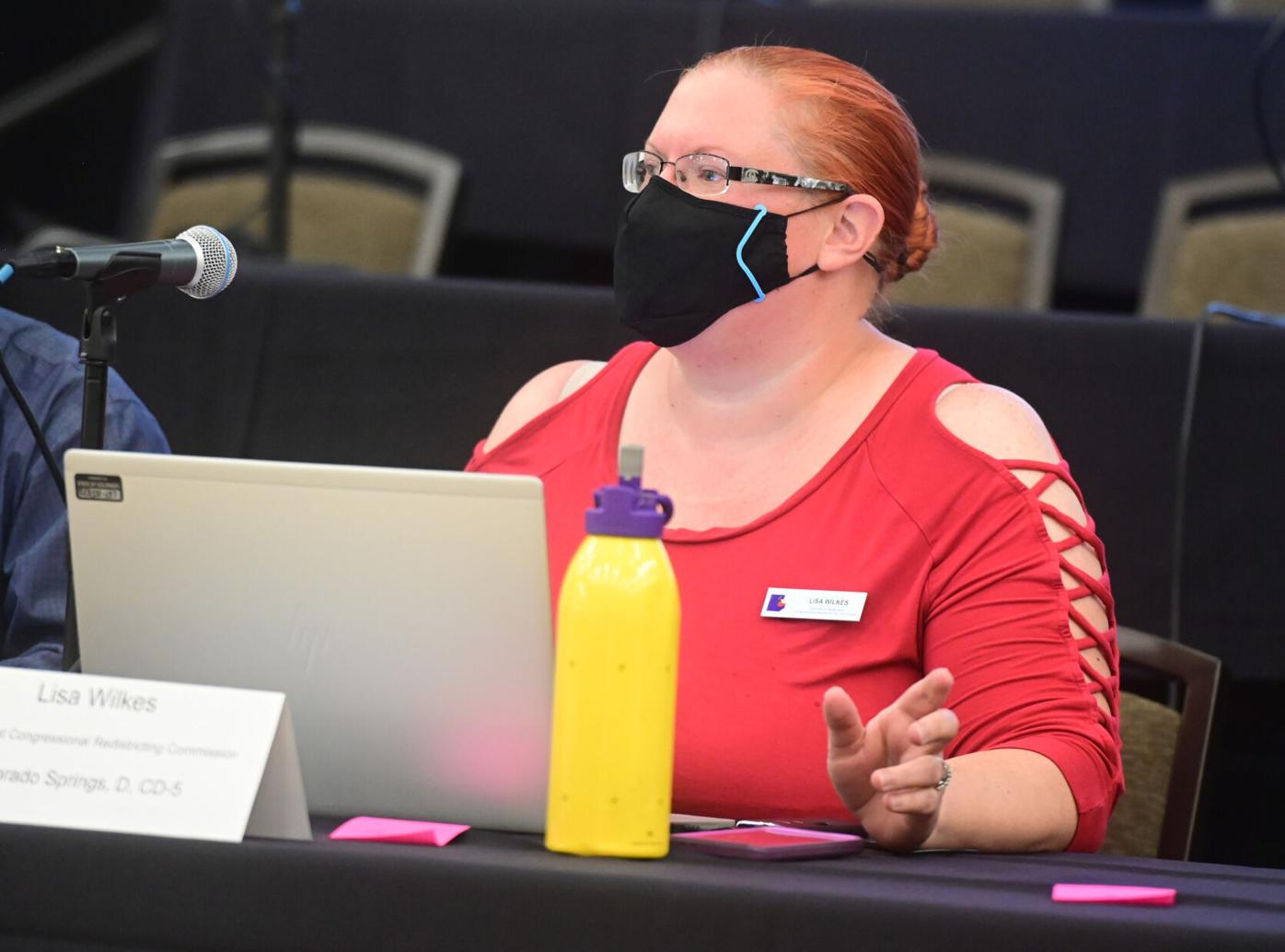 photo illustration by Emily Ferguson, Colorado Politics Democratic U.S. Reps. Ed Perlmutter, Jason Crow and Joe Neguse and Republican U.S. Reps. Lauren Boebert and Ken Buck, left to right, are among the seven Colorado House incumbents with reason to celebrate after the state’s independent redistricting commission finalized a congressional map on Sept. 28, 2021, ahead of the 2022 election.

colorado politics file photo Alana Kornaker, an intern with UCCS GeoCivics, sets up an educational map of Colorado with cones to show areas of growth through history before a meeting of the state’s independent congressional redistricting commission at UCCS Aug. 5.

The Colorado Supreme Court has approved the eight-district congressional map crafted by the state’s inaugural independent congressional redistricting commission, setting up the new map to be used for the next 10 years.

The Monday ruling largely concludes the state's congressional redistricting process, save for administrative work by state and county election officials, who will begin preparing for the 2022 election using the new congressional map.

The addition of an eighth congressional district for Colorado came as the result of the state’s booming population over the past decade. It also meant a significant reconfiguration of much of the state’s U.S. House districts. The new 8th Congressional District was added in the suburbs north of Denver in an attempt to reflect where the population has grown rapidly, and also where there's a large enough concentration of Hispanic voters to create a district where they can arguably influence the district's elections.

The new map was the result of a months-long process that began with the selection of the commissioners in the spring, a summer of public hearings and map drafts, and the ultimate selection of a final map in late September.

The process was also beset with cascading delays caused by the global coronavirus pandemic. The U.S. Census Bureau took months longer than planned to finish the decennial census, because the pandemic emerged during the normal data-gathering process. Instead of delivering the census data used for redistricting in the spring, like usual, it was delayed until August, leading the redistricting commissions to use older survey data for initial map drafting and to take more time than planned to finish and send the new redistricted map plans to the state Supreme Court after getting the official data.

The court’s decision also settles a dispute over the meaning of portions of the constitutional amendments passed overwhelmingly by Colorado voters in 2018, knocking down the idea that the state constitution requires minority voter protections that go beyond what’s required by federal law.

Critics had challenged the map, saying that even in areas of the state where minority voters don’t make up more than half of the population — where federal minority voting protections kick in — special protections must be ensured. They argued that the language prohibiting the dilution of minority voters meant that in areas where groups of non-white voters could be grouped together in "coalition" districts where they create a combined majority, or where a sufficient number of white "crossover" voters who vote with the non-white voters could be combined to add up to a majority, then doing so was required, in order to empower the minority voters.

Hispanic and Latino advocacy organizations tried to convince the state supreme court that Hispanic voters in southern Colorado and Greeley are set up for defeat in the new map, because they are paired with larger white voting blocs that regularly vote against those non-white voters, even though different district configurations could result in crossover or coalition districts that would empower the minority voters.

The state Supreme Court justices grapple with the issue in their opinion: "We acknowledge that the disputed language in section 44.3(4)(b) — including diluting the impact of that racial or language minority group’s electoral influence — is not found in the text of the VRA. The question is: What does this phrase mean or require?"

They found that the 2018 amendments, along with the state's official "Blue Book" election guide and the legislative record of the amendments' crafting, did not offer enough definition to the concepts of "electoral influence" and "dilution" to reach the conclusion of the challengers: "We reject the opposers’ arguments that section 44.3(4)(b) required the Commission to create additional protections for Hispanic voters in the form of influence, crossover, or coalition districts."

Had the court sided with the challengers, it would have sent the state's redistricting process into upheaval, requiring the commissioners to reconvene and redraw the map. It would have also set up the state's new redistricting system for federal challenges that could have ended in the U.S. Supreme Court. The commission's attorneys said during oral arguments in October that remanding the map back to the commission to make the challengers' desired changes would likely have resulted in a legal challenge to the system, based on 14th Amendment claims, arguing that the system would treat white and non-white voters differently enough to violate federal Equal Protection rights.

“Receiving this approval from the Colorado Supreme Court reaffirms that this new redistricting process is a successful model that should set the standard for the rest of the country,” said Jessika Shipley, staff director of the Colorado Independent Redistricting Commissions. “It took a lot of patience, dedication and thoughtfulness from the commissioners, staff and the public, and we look forward to seeing how the new congressional districts bring positive support and representation to the people of Colorado.”

To explore how the redistricting criteria can affect a map, Colorado Politics compiled several different maps, each with district population deviations of less than one percentage point and using some of the same data being used by the commission, but drawn prioritizing different concepts. Some seem unlikely, but they illustrate how the redistricting criteria manifest in different maps, while some might end up resembling the map ultimately drawn by the commission.

U.S. Rep. Lauren Boebert, a first-term Republican from Silt, brought in more campaign contributions in the just-ended third quarter than any of Colorado's other congressional candidates.

Ernest Luning: "Across the decades — but especially lately — it appears that Colorado voters are less inclined to pick their U.S. House members from the traditional fields that yield federal lawmakers."

While the congressional map won’t be set in stone until the state’s high court gives its thumbs up, it isn’t too early to identify some winners, some losers and a split decision.