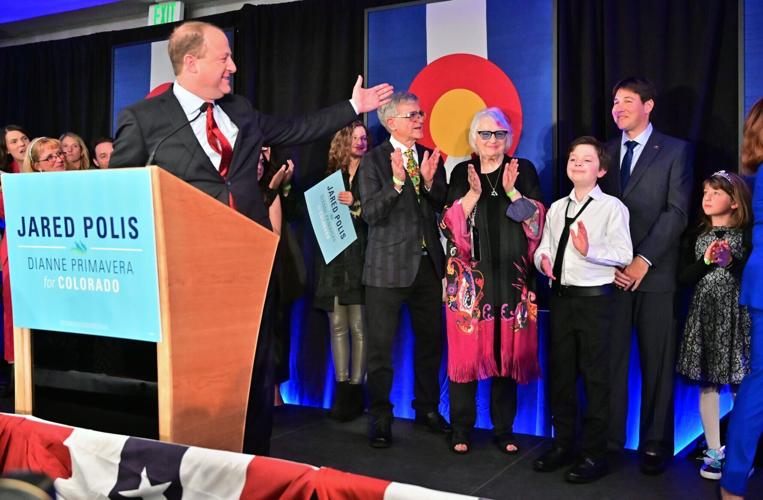 Col. Gov. Jared Polis recognizes and thanks his family after giving his victory speech at the Art Hotel in Denver, including his children, Cora and Caspian, his parents, Susan Polis Schutz and Stephen Schutz, and husband, Marlon Reis. 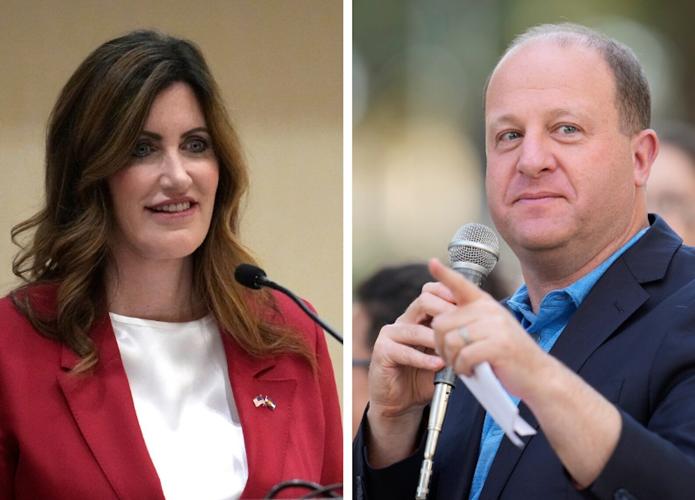 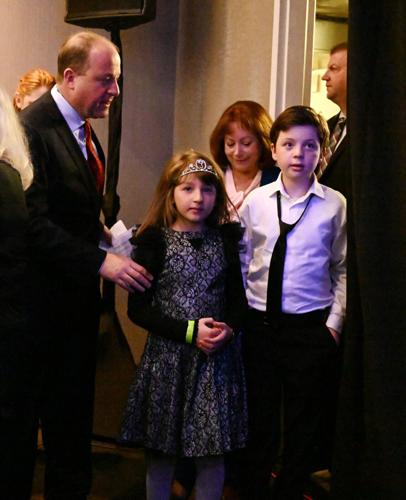 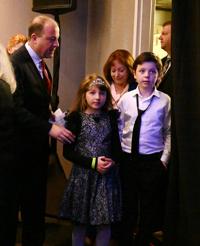 Gov. Jared Polis leads his children, Cora Polis Reis and Caspian Polis Reis, to the stage to give his victory speech after the election on Tuesday, Nov. 8, 2022. (Photo by Jerilee Bennett, The Gazette)

Col. Gov. Jared Polis recognizes and thanks his family after giving his victory speech at the Art Hotel in Denver, including his children, Cora and Caspian, his parents, Susan Polis Schutz and Stephen Schutz, and husband, Marlon Reis.

Gov. Jared Polis leads his children, Cora Polis Reis and Caspian Polis Reis, to the stage to give his victory speech after the election on Tuesday, Nov. 8, 2022. (Photo by Jerilee Bennett, The Gazette)

Polis, a former five-term congressman from Boulder, and his running mate, Lt. Gov. Dianne Primavera, were leading Ganahl, a University of Colorado regent who lives in Lone Tree, and her running mate, Danny Moore, by more than 16 points, 57% to 40.8% as of Thursday. Third-party candidates Danielle Neuschwanger, Kevin Ruskusky and Paul Noël Fiorino trailed, with only Ruskusky breaking the 1% threshold.

Colorado kept its blue hue, with every statewide race called for Democrats and the party on a path to keep its majorities in the state House and in the more competitive state Senate.

Polis led Ganahl in every publicly released poll — by double digits in all but a couple surveys released by GOP firms — and most national election forecasters rated the seat as solidly in the Democrat's column.

Polis, 47, won the office in 2018 in a Democratic wave election on the same night his party swept every statewide office on the ballot and took control of the General Assembly, leaving Republicans with less power at the state level than at any time since the late 1930s.

Four years ago, voters made Polis the first openly gay man to be elected governor anywhere in the country and the state's first Jewish governor. He was also Colorado's first sitting U.S. House member to win election as governor.

Ganahl, 56, is the only Republican holding statewide office in a state whose voters have been tilting toward Democrats for more than a decade. If she'd won, she would've become the first woman elected governor of Colorado — the first state in the country where women won the right to vote by popular referendum, and the first government in the world to elect women to a legislative body.

Coloradans are accustomed to reelecting their governors and haven't ousted an elected incumbent since the early 1960s. In the last 50 years, Colorado voters have only elected a single Republican governor, former State Treasurer Bill Owens, who served two terms from 1999-2007. Over the same stretch, five Democrats — including Polis — have won election to the office 11 times.

But with Democrats holding all the reins in Colorado and nationally, Republicans began the midterm cycle confident in the party's ability to stage a comeback in the state following three consecutive cycles of losing political ground to the Democrats.

As President Joe Biden's approval rating remained underwater and the national economy floundered, the GOP was counting on voters deciding to kick out the incumbents — and all the incumbents are Democrats.

That's the campaign Ganahl ran, blaming Polis for all the state's woes, including a persistently high cost of living and a surging crime rate, outpacing national rates in some categories.

"Jared wants you to reelect him to try to fix the problems that he created," she said. "Polis is the problem. Crime, drugs, inflation — when you vote, hold him accountable. And when I'm governor, I expect you to do the same with me. I'm a problem solver, not a politician, but I will get the job done."

Describing herself as a "mom on a mission," Ganahl embraced a twist on the moniker in the final weeks of the campaign after Polis drew attention to a new phrase she introduced during their final debate.

“I am a mad mom," she said. "I have a right to be angry and I represent a lot of parents.”

Responded Polis: "My opponent identified herself as a mad mom. I identify myself as a happy dad ... raising my kids in the best state of all the states, great outdoors. We love our freedom. I will always protect our freedom.”

Polis' remarks aligned with the thrust of his reelection campaign — "I don't even recognize the dystopian version of wherever she lives," he said during another debate. When Ganahl began referring to herself as a "mad mom" her supporters began showing up at rallies sporting the phrase on campaign apparel.

Polis stuck with his message, maintaining that he's led the state through a difficult stretch, including a global pandemic and the battered economy left in its wake, social upheaval and historic wildfires and other effects of climate change.

"Look, this is fundamentally a decision about moving Colorado forward," Polis said in a recent debate before enumerating the campaign promises he said he's fulfilled: providing full-day kindergarten without charge to parents, cutting the cost of some health insurance premiums, capping the cost of insulin, and advancing the state toward aggressive greenhouse gas-reduction goals.

Both candidates are wealthy entrepreneurs — Polis first struck it rich in college when he founded an early internet service provider, followed by selling an online greeting card business and a flower delivery service, while Ganahl founded the largest national chain of dog daycare providers.

While both candidates self-funded their campaigns, Polis' contributions all but swamped Ganahl's, with the incumbent pitching at least $12 million into his reelection bid while the challenger sunk in the neighborhood of $2 million into hers.

Ganahl won the nomination in the June primary by about 9 percentage points over former Parker Mayor Greg Lopez, who was making his second run for the office and campaigned on a shoestring. Democratic groups spent millions of dollars to promote Lopez as "too conservative" for the state in an attempt to encourage Republican primary voters to pick a candidate perceived as less palatable to more moderate voters, presumably giving Polis the upper hand in the general election.

Today's elections will define the next policy agenda in Washington, D.C., as well as at the Colorado state Capitol.

Who do you think will win Super Bowl LVII?

The Kansas City Chiefs and the Philadelphia Eagles will face-off at State Farm Stadium in Glendale, Arizona for Super Bowl LVII on Feb. 12.