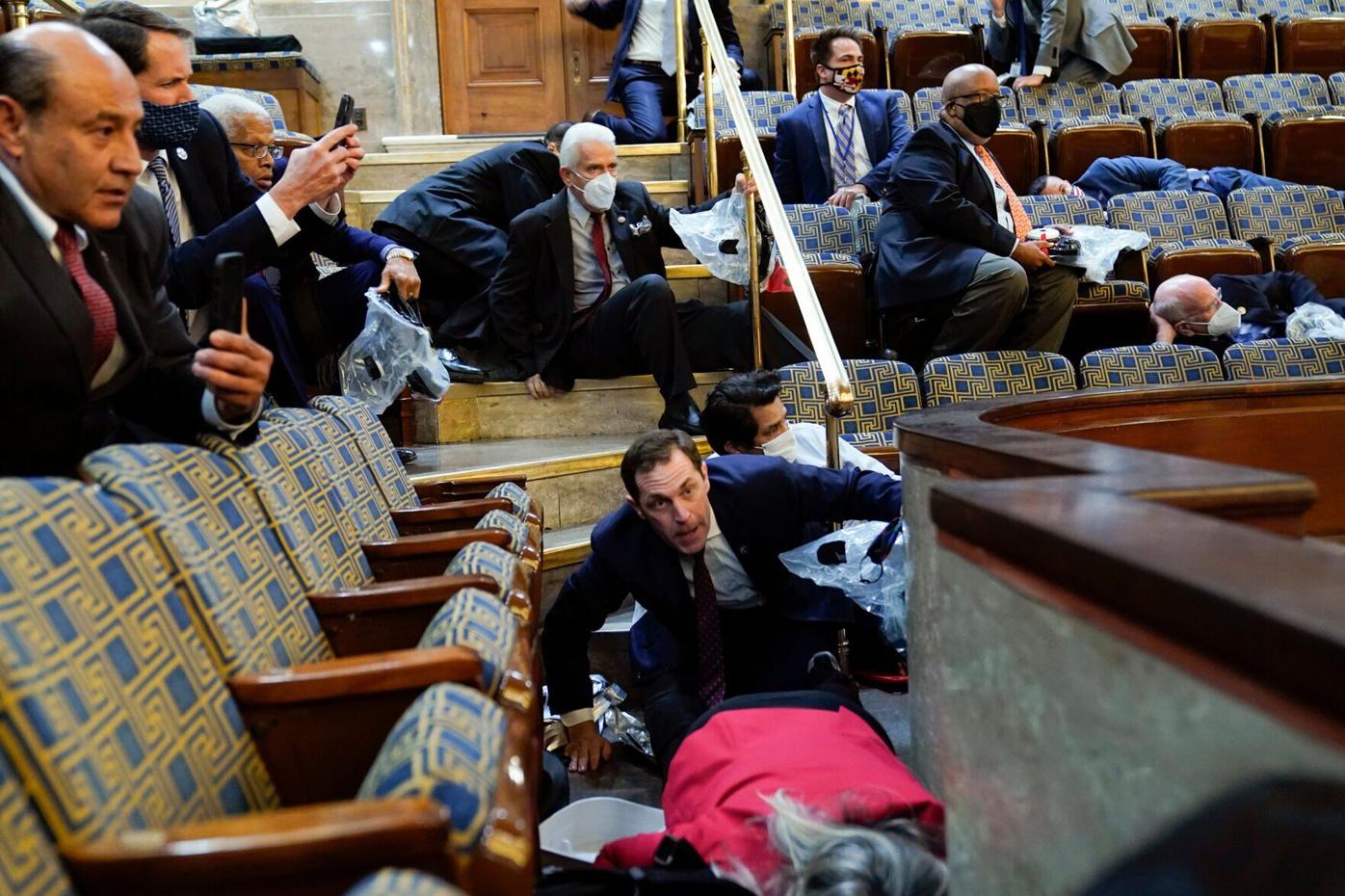 In this file photo, lawmakers including U.S. Rep. Jason Crow, a Centennial Democrat, center, shelter in place in the House gallery as protesters storm the U.S. Capitol on Jan. 6, 2021. 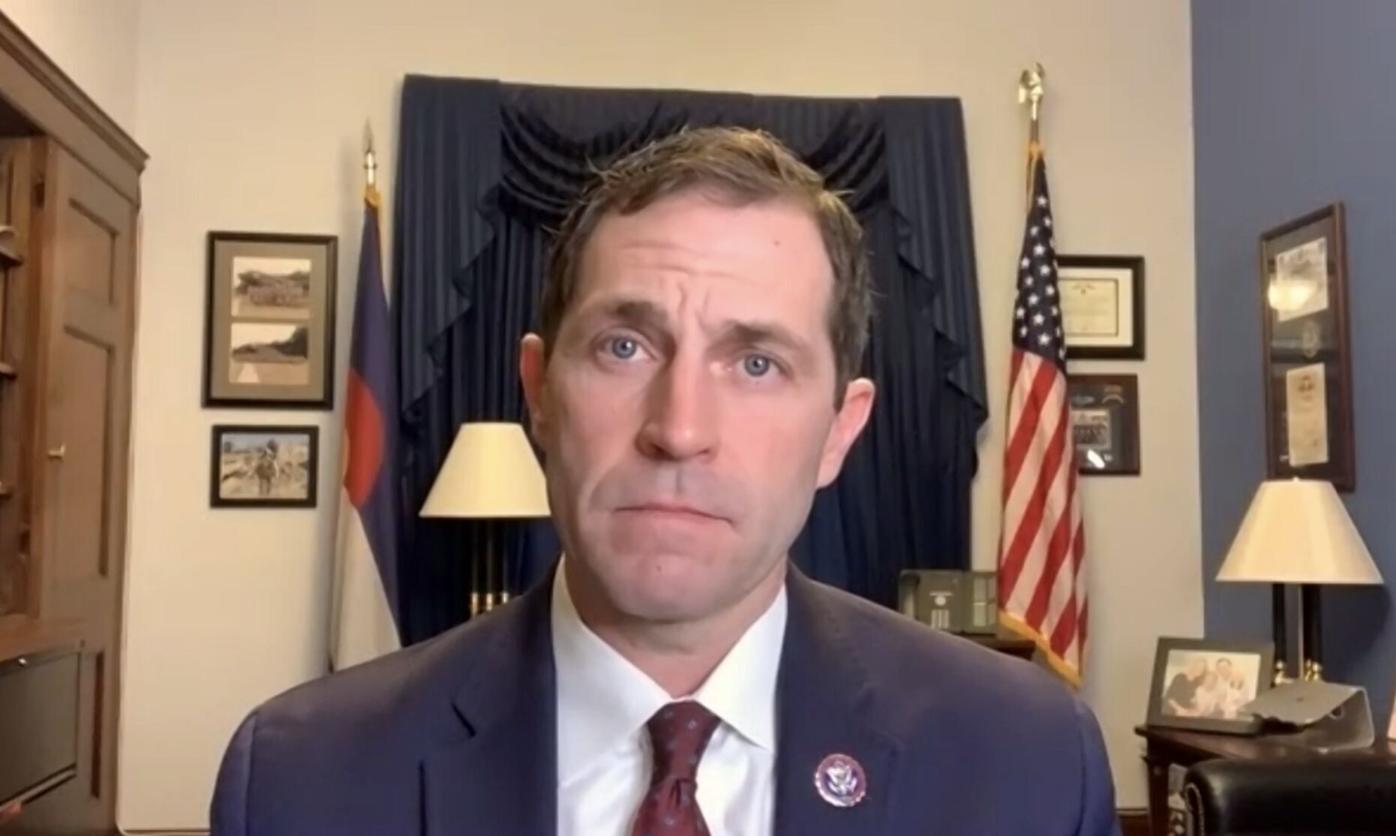 U.S. Rep. Jason Crow, a Centennial Democrat, talks during a remote press conference on Wednesday, Jan. 5, 2022, about his response to the attack on the U.S. Capitol a year earlier on Jan. 6, 2021.

In this file photo, lawmakers including U.S. Rep. Jason Crow, a Centennial Democrat, center, shelter in place in the House gallery as protesters storm the U.S. Capitol on Jan. 6, 2021.

U.S. Rep. Jason Crow, a Centennial Democrat, talks during a remote press conference on Wednesday, Jan. 5, 2022, about his response to the attack on the U.S. Capitol a year earlier on Jan. 6, 2021.

A year ago, as a violent mob swarmed the U.S. Capitol in an attempt to prevent Congress from certifying the results of the 2020 presidential election, U.S. Rep. Jason Crow recalled, he and other lawmakers were trapped in the House gallery in fear for their lives.

"We sat there as the mob tried to break down the barricades and make it to us and kill or capture members of Congress to help halt that process," he said during a remote press conference from Washington on Jan. 5.

Drawing on his training as an Army Ranger — he led more than 100 combat missions on three tours in Iraq and Afghanistan — the Centennial Democrat said he snapped into combat mode.

"I never thought that the different parts of my life would converge in the way that they did on that day," he said. "When we came under attack, I went back into that combat mode again and thought about how we were going to fight our way out or make a stand in that chamber to get out alive."

Crow said his biggest fear was that he wouldn't see his family again. He said he called his family to tell them that he loved them, a call he never imagined he'd have to make. That's when he saw his colleague, Democratic Rep. Susan Wild of Pennsylvania, on a FaceTime call with her son — and in obvious distress.

"I did what I think anybody would do, frankly, when you have a friend that needs a touch, a friend that needs some compassion and support — you reach out and you hold that friend's hand and you let 'em know that you'll do everything to protect them and get them out the situation," Crow said, adding that that's what was going through his mind when an iconic photo was taken of him comforting Wild.

Eventually, Crow and the other lawmakers were rescued from the chamber by Capitol Police and led to a safe room, where they waited for law enforcement authorities to clear the complex before lawmakers resumed certifying the election later that night.

“Reflecting on the one-year anniversary of the violent insurrection at the Capitol is not just an exercise in history," Crow said. "The disturbing forces that led to that attack are still at play today. We are facing a surging domestic, violent extremist movement in this country, disinformation and misinformation campaigns promoted by foreign adversaries and domestic groups, and we are experiencing an unprecedented assault on our voting system, elevating party loyalists over the rule of law."

Crow said he was struck by several things as he tried to make sense of the day's events, including the naked displays of racism and white supremacy — exemplified by a rioter parading a Confederate flag through the halls of the Capitol, marking what he called the "level of division and vitriol in our community and how divided and tribal we have become, and the severe challenge that we are facing in overcoming the toxicity in that division."

He was stunned to realize how many veterans had been part of the mob of rioters.

"When I was on one side of that barricade, on the other side of that barricade, just feet away from me, were veterans who years before, just like me, had raised their right hand, had taken an oath to this nation and done so in good faith to protect the Constitution, to defend our nation and to serve the country over party, over person," Crow said. "And I reflected on how, years later, we could take so many different paths that I'm sitting there as a member of Congress, trying to uphold a certification process and uphold a right and just election, and on the other side, as a veteran, trying to kill me and my colleagues and stop that process. How did we get here as a country?"

On top of that, Crow said, he was alarmed in the aftermath of the Capitol riot by what he described as "an assault on our voting system, a very concerted effort by Republicans in statehouses around the country to insert [into the electoral process] people who are loyal to Donald Trump, who are loyal to party over country, and who will take their orders from a person, not from the rule of law, and to undermine and disenfranchise millions of voters in dozens of states around the nation."

Taken together, he said, the country is facing threats to democracy, leading to a clear question: "What do we do? What's the path forward?"

His response, Crow said, is to introduce what he terms a "Democracy in Action" toolkit, a series of steps developed in concert with numerous civic groups to help Coloradans and Americans "reaffirm their commitment to our democracy, to reengage with our democracy and to take concrete steps to show that we are willing to stand up and fight for American democracy."

The list of bullet points reads like the elements of an old-school civics course with a few extras thrown in.

Included are suggestions ranging from basic civic engagement to more particular approaches tailored to the current climate — volunteer and donate to help those in need, subscribe to a local newspaper, attend city council meetings, write to elected representatives and run for office, along with supporting election officials and pushing back against misinformation.

"Have the hard conversations," reads one suggestion. "When friends and family say something that isn't true about elections, talk with them calmly about facts."

"What I'm calling for is for people to take agency, take responsibility, for us to reengage and reinvigorate our democracy and to make sure that this doesn't happen again," he said. "This is a proactive request. This is a call to action by Americans and Coloradans to stand up."

It could be a tall order, since many on both sides of the divide are equally convinced that they have a corner on a set of facts that are ultimately irreconcilable with their opponents' views.

Crow's prescription, however, is as much about attitude as it is about methods, with the word "calmly" playing a key role.

"Let's figure out — how do we lower the temperature?" Crow said. "How do we reduce the division that is gripping our families, our neighborhoods, our communities?"

Said Crow: "I don't know a single person, not one, who hasn't had a family member relationship strained, a relationship with a neighbor or a coworker strained, or even broken off in the last couple of years. That's different from how it used to be in America, how it was when we were all growing up, when we could disagree. All of us sympathize with the challenge of Thanksgiving Day — we get together with aunts and uncles and cousins, and there's certainly a wide variety of views, and people would have their debates, but at the end of the day, you still loved each other and you were still family. That's changed."

Underlying his proposal, Crow said, is his vision of "a new American patriotism" based on honesty.

TRAIL MIX | Candidate switcheroos are nothing new in Colorado

TRAIL MIX | 'Not one of the boys': How Mary Estill Buchanan just missed breaking an enduring glass ceiling

Colorado officials reflect on 1-year anniversary of US Capitol attack

On the one-year anniversary of the Jan. 6 attack on the U.S. Capitol, Colorado elected officials — including many who were inside the Capitol when it was stormed by a mob of Trump supporters — marked the occasion by asking the American public never to forget it, while others dismissed its comparison to momentous events in history.