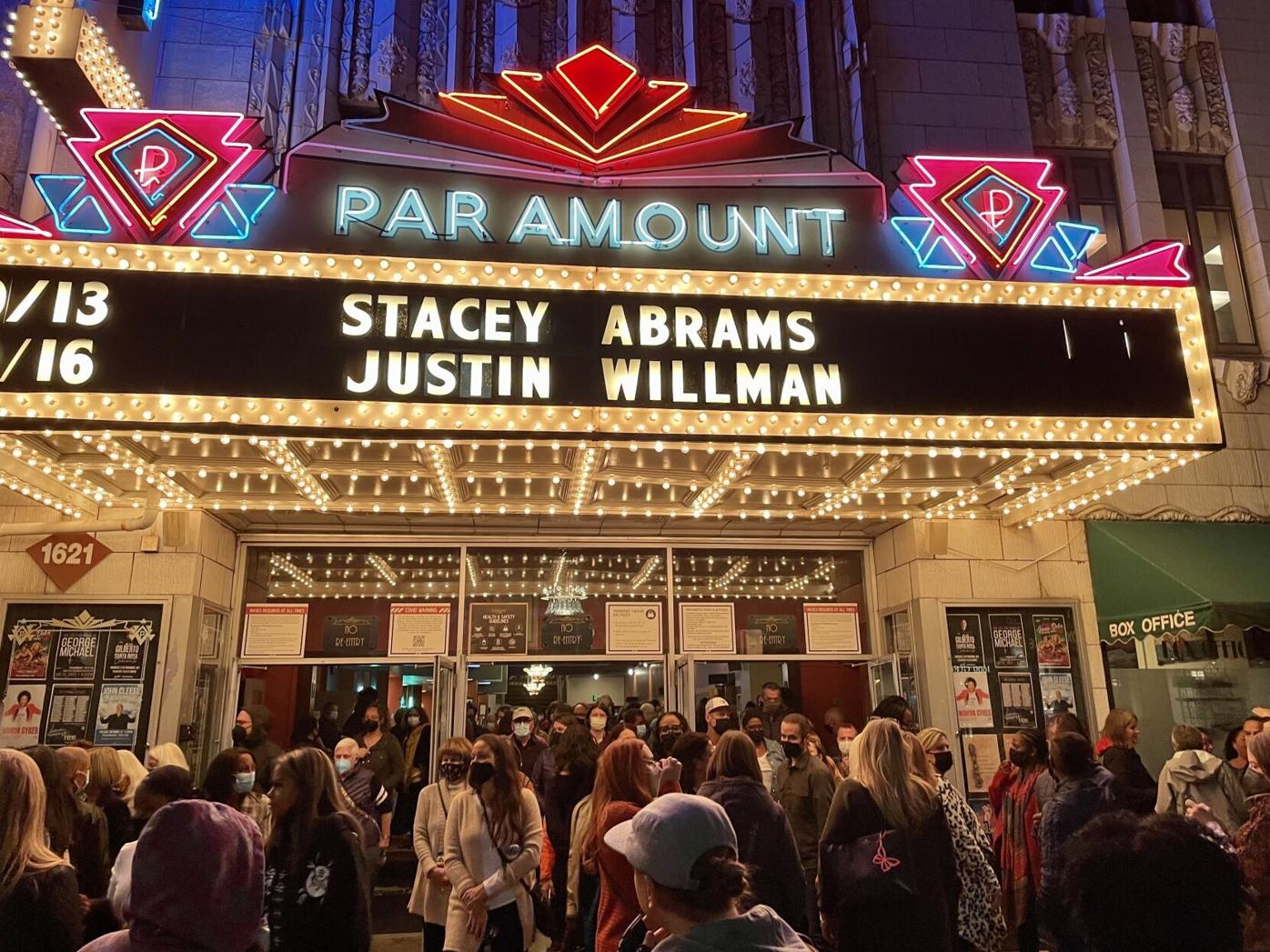 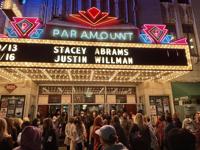 Crowds line up to see Stacey Abrams recently at the Paramount Theatre in Denver. 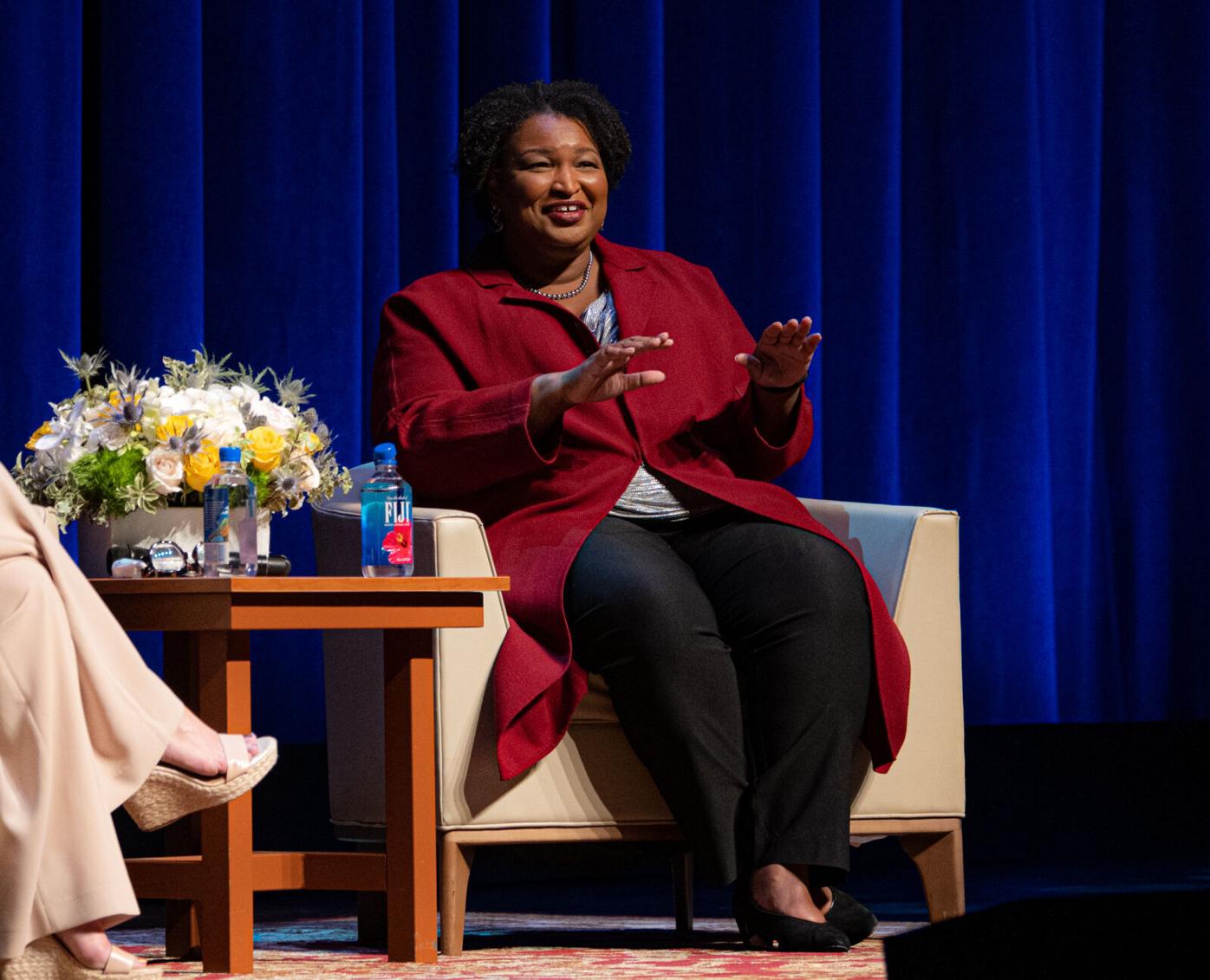 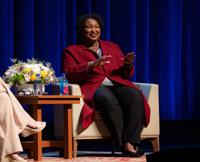 Crowds line up to see Stacey Abrams recently at the Paramount Theatre in Denver.

For Colorado Democrats who worry their national party is squandering its historic opportunity to pass Joe Biden’s sweeping infrastructure agenda, Stacey Abrams’ visit to Denver last week could not have been better timed.

The rising political star dropped the mic — and a book’s worth of self-help gems — on a capacity crowd at the Paramount Theatre on Wednesday for an evening that was equal parts pep talk, voter-registration rally and rock concert.

The line to get in stretched two blocks for what was likely most attendees’ first time back in a packed concert hall since the pandemic. And if this had been an actual concert, you could call the headlining band “Stacey Abrams and the New Georgia Project.”

Abrams’ grassroots movement was responsible for registering 800,000 new voters during her 2018 run for Georgia governor, which she lost by 50,000 votes. Given that Georgia’s two razor-thin Senate runoffs went blue in January, Abrams is perhaps the single-biggest reason the Democrats now have control of the Senate — and the person most responsible for changing the potential scope of the Biden presidency.

That centrist Democrats have not since fallen into lock step does not surprise Abrams, who does not correlate the party’s public disputes with fractured intent.

“The Republican Party is a very homogeneous party,” Abrams said. “They have shared values and a rigid ideology: They want smaller government, and they want to limit access to certain freedoms. The Democrats have everybody else. We have shared values, but we disagree about issues. The question for us is not, ‘Are we moving in a different direction?’ We are moving in the same general direction. But not everyone in the Democratic Party wants to get to the same place. What we’ve got to remember is, ‘Thank God we’re not going in the other direction.’

“The legitimate question for us is how far are we going to go; how fast we are going to get there; and who is going to pay for it? And that is what true democracy should look like.”

Much of Abrams’ message was about individual accountability and putting personal values into practice. But Abrams, also a popular romance/spy/thriller novelist who is as articulate on the relative strengths of “Game of Thrones” as she is on voting inequities in America, is no Pollyanna. “I am not an optimist. I am not a pessimist. I am an ameliorist,” she said. “To ameliorate means to mitigate effect. I think the glass is half full. And I think it’s probably poisoned. But I know I am going to get thirsty. So my job is to find the antidote.”

Voting, she said, is like taking medicine. But, like medicine, you can’t skip a dose. The danger when taking the same medicine over time and seeing no real cure is deciding to stop taking the medicine altogether, she said. “Our medication has to be stronger, but we can never stop taking it because the minute we do, that’s when we will succumb to the disease.”

Abrams’ talk, moderated by journalist Gloria Neal, Director of Public Affairs for Denver Mayor Michael Hancock, included a passionate defense of a Constitutionally guaranteed free press that has been under unprecedented attack since the dawn of the Trump presidency.

“When you have the head of state undermining the legitimacy of journalism, attacking members of the press by name and encouraging physical attacks on them, that is an assault on democracy,” Abrams said. “One of the ways populist autocrats take over authoritarian nations is when they come in and they are really cool because they curse and they say inappropriate things. Everybody is like, ‘He’s not like the rest, so he should be in charge.’

“But the minute they get into power, they attack judges and the rules of law. They attack anyone who disagrees with them. And most pivotally, they attack the press.”

Abrams also made it clear she believes in the police, and the safety and protection they provide, but that there is never a justification for brutality.

Brutality, she said, “is an affirmative action that says you are not worthy of the courtesy of humanity — and that is not permissible. We have to understand the historical construct that led to the police force as they exist in the United States today, and that we are responsible for excavating the parts that are grounded in fugitive slave laws that dehumanize people. No one should be immune from the basic obligations of courtesy, humanity and protection.”

Abrams additionally commented on the normalization of lies, the Jan. 6 insurrection and her legal challenge to losing the Georgia governor’s race, which some have compared to Trump’s refusal to accept defeat in 2020. “From the very beginning I have acknowledged that (Brian Kemp) had a sufficient number of votes under the system as it existed,” Abrams said. “My issue is: The system as it existed was wrong.”

Abrams praised Colorado’s recent advances in voting expansion but also pointed out that not so long ago, Colorado was known as “The Hate State” after voters passed a 1992 ballot initiative that would have prohibited Colorado from enacting antidiscrimination protections for gays. Turns out that happened a lot longer ago than Abrams thought, but her point was valid:

“Colorado was a very different place where the ability to love who you love and be who you are was not only denied, it was reviled — and you all have created something spectacular since then,” she said of Amendment 2, which was struck down before it could go into effect. “But we have to remember that what happened 10 years ago can happen again 10 days from now.”

“As a Black woman from Mississippi, progress is all I can hope for,” Abrams said. “My maternal grandfather was born in 1885 — that was 20 years after the end of slavery. I’m his granddaughter, and I got to be the first Black woman in American history to stand for governor. My systems are grounded in the fact that I am not telling the stories that my grandfather told. I am going to be telling the stories my mother told, and I have nieces and nephews who can tell new stories. As long as we keep trying, we keep moving forward.”

And for Abrams, make no mistake: Moving forward means an inevitable run for president at some point. When Neal asked why she was being so uncommonly forthcoming about her ambitions, Abrams said: