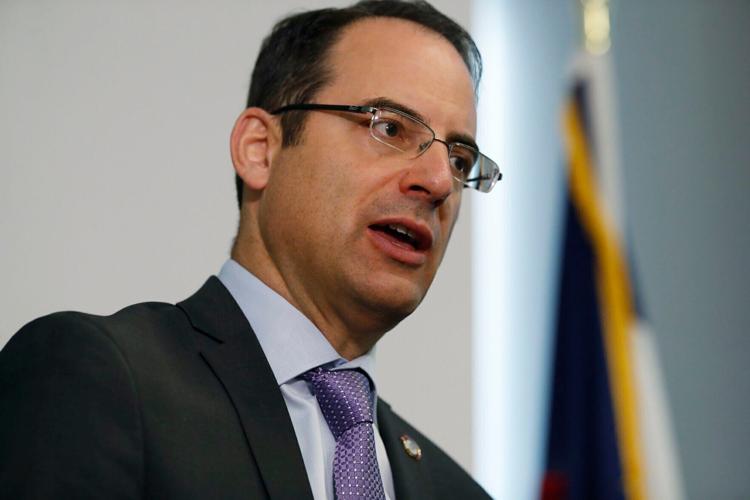 Dozens of people with ties to Dish Network ponied up nearly $40,000 in campaign contributions to Colorado Attorney General Phil Weiser — many of them giving for the first time — just before, during and after the company was the focus of a deceptive trade practices inquiry that began in 2021, campaign records show.

And although two other of the state’s largest cable providers, DirecTV and Comcast, were already the targets of similar investigations since 2019, only Dish came out unscathed. All three companies eventually settled AG claims that they wrongly assessed fees to consumers, but Dish was the only one that did not have to refund any of the money it allegedly pocketed or explain to its customers what had occurred.

In all, Weiser’s re-election campaign has collected more than $60,000 in contributions from people tied to all three companies in that timeframe, the bulk of it from people associated with Dish, including its owners, Charles and Cantey Ergen, records show.

The contributions don't appear to violate any Colorado ethics laws or pay-to-play prohibitions on contributions from government contractors, according to legal experts consulted by The Denver Gazette, although they did say it could raise eyebrows.

A portion of the contributions tied to Dish and its lawyers came at a May 2021 fundraiser the publicly traded Colorado company sponsored on Weiser’s behalf, state campaign finance records show — three months before the AG’s office says it officially told Dish it was including it in its inquiry. The inquiry ended without any actual investigation.

Dish and the attorney general had other personal connections during that time.

Ergen and attorneys from Washington, D.C.-based Cozen O’Connor that represented Dish in its settlement negotiations met with Weiser in August 2021 during an invitation-only breakfast held for attorneys general across the country at The Broadmoor hotel in Colorado Springs. That was followed by a fireside chat that morning between Ergen and Weiser at the same Attorney General Alliance event, according to a publicly available agenda of the event. 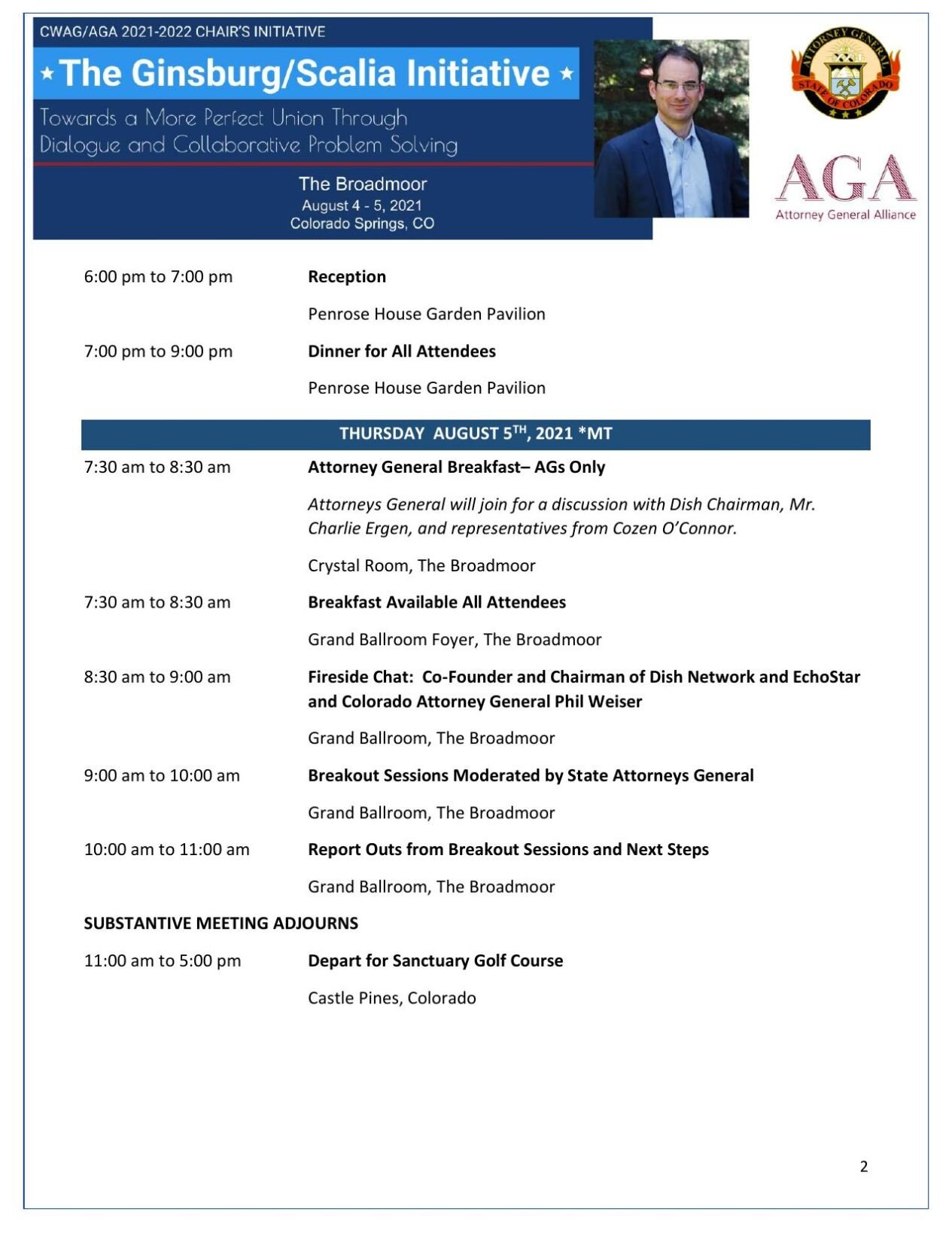 Weiser is the chairman of AGA, which counts 45 of the nation's attorneys general among its members. The organization began as the Conference of Western Attorneys General.

The outcomes of the AG’s inquiries were demonstrably different for the three companies despite the same alleged misconduct. The AG claimed that all three had wrongly assessed extra fees for high-definition service when the technology was already a standard feature. DirecTV was also tagged with charging consumers a regional sports fee when the key local network, Altitude Sports, was not actually on the air because of a contract dispute.

Weiser’s campaign told The Denver Gazette there was no connection between contributions and the settlement outcomes, noting that many contributions occurred before negotiations had even begun.

“All were made well beforehand and absolutely there are no connections between them,” campaign spokesman Cody Wertz said. “We cannot underscore it enough: Phil Weiser refuses and returns any contributions from anyone tied to a pending investigation.”

Following The Denver Gazette's reporting, Wertz said the campaign is returning contributions from anyone with ties to Dish that occurred between August 2021 and March 2022.

Michael Bloomberg, outside groups pour in $15 million in Colorado

“Our team does the best it can to ensure no such donations are accepted,” he said. “Our policy is that once we notice one that gets through our review, we amend and return those contributions.”

Spokespersons for Dish Network did not immediately respond to a Denver Gazette email seeking comment.

The settlements and contributions

Weiser announced on June 3, 2021, that DirecTV had agreed to pay more than $1 million to about 204,000 customers for the regional sports fee issue – through either a $5 account credit or a check – and would give up to $3 in monthly credits for 27 months to about 15,000 customers impacted by the HD issue.

Additionally, DirecTV was required to contact all its customers over 60 days to let them know about the settlement.

Three DirecTV-affiliated attorneys – including its director of global public policy at owner AT&T – made contributions to Weiser's campaign totaling just $1,975, the first of them in December 2019. They made no other contributions to any candidate or cause in that timeframe, records show.

Weiser on May 13, 2022, announced a settlement with Comcast over the HD issue that would allow about 40,000 customers the opportunity to switch to a less-expensive plan without any diminishment in service. Like DirecTV, the company had to notify all its customers of the settlement, provide specialize training to employees to help customers make the switch, and pony up $75,000 to cover the cost of the AG's investigation.

At Comcast, 32 employees contributed a total of $18,800 to the AG's campaign -- from January 2021, about a year after the AG investigation had begun, through October 2021 -- records show. One of them – Lynn Charytan, the company’s executive vice president and general counsel – was the company’s signatory on the AG agreement. Charytan and others who gave the maximum $1,250 donation to Weiser's campaign also gave to no other campaign or cause in that timeframe, records show.

The settlement penned for Dish Network was different.

The company signed its settlement on March 23, 2022, in which it agreed to confirm with Weiser’s office that Dish had stopped assessing a $10 monthly HD service fee to nearly 2,500 customers, according to a copy of that agreement.

“The outcomes were in line with the issues and number of people impacted,” Pacheco explained. “For Dish, there really was no investigation. They said they would voluntarily end the fee altogether and no one would be charged any longer. That was a better deal for consumers and provided better transparency to their pricing plans.”

There is no mention among Dish Network’s public filings with the Securities and Exchange Commission of the Colorado inquiry or its settlement.

In the meantime, more than 70 Dish executives, lawyers, employees and others tied to the company made campaign contributions between December 2019 -- when word of the HD inquiry became public -- and March 2022, that ranged from $20 to the $1,250 individual maximum allowed under Colorado law, state campaign finance records show. Another eight donations totaling $3,750 from the Cozen law firm that represented Dish in the settlement negotiations came in over the next five months after the settlement was announced.

The Ergens made their donations in June 2021, records show, the same month as the invitation-only breakfast and fireside chat at the Broadmoor.

And the $20 donation came from the vice president and associate general counsel at Dish, who over the course of 2021 made monthly contributions that eventually reached the $1,250 maximum, records show.

“I think anyone who looks at all this is concerned about transparency and whether people in Colorado are getting the best possible settlements,” said John Kellner, district attorney for the 18th Judicial District and the Republican candidate challenging Weiser in November.

“It simply raises a lot of questions to me,” he said.

Dish network was represented at the negotiating table by attorney Lori Kalani, a partner at Cozen O’Connor who previously spent about a decade as Dish’s in-house counsel and was responsible for responding to any AG investigation. While at Dish she pioneered the idea of a law practice specializing in representing clients before attorneys general.

She moved to Cozen O’Connor in 2015 when the firm created its “state attorneys general practice” with a focus on AG offices nationwide. Kalani is the co-chair of that branch.

“AGs must be purposefully educated about the interests and challenges of the businesses they regulate,” Kalani told Law.com in a May 2021 article about her success. “I built both a network of connections to AGs in every state that continues to serve me to this day.”

She told Law.com that her professional responsibility was to provide "advice and counsel to corporate clients who faced or were at risk of AG enforcement actions."

She contributed $1,250 to Weiser’s campaign on Dec. 11, 2019, just after the AG told DirecTV and Comcast it was beginning its investigations into the HD fees. Kalani’s been a consistent contributor to Republican candidates for Colorado attorney general dating back to John Suther’s campaign in 2010, records show.

Kalani did not respond to an email from The Denver Gazette seeking comment.

Cozen O’Connor is one of a handful of firms known as Legacy Patrons, paying at least $50,000 to sponsor events held by the Attorney General Alliance. 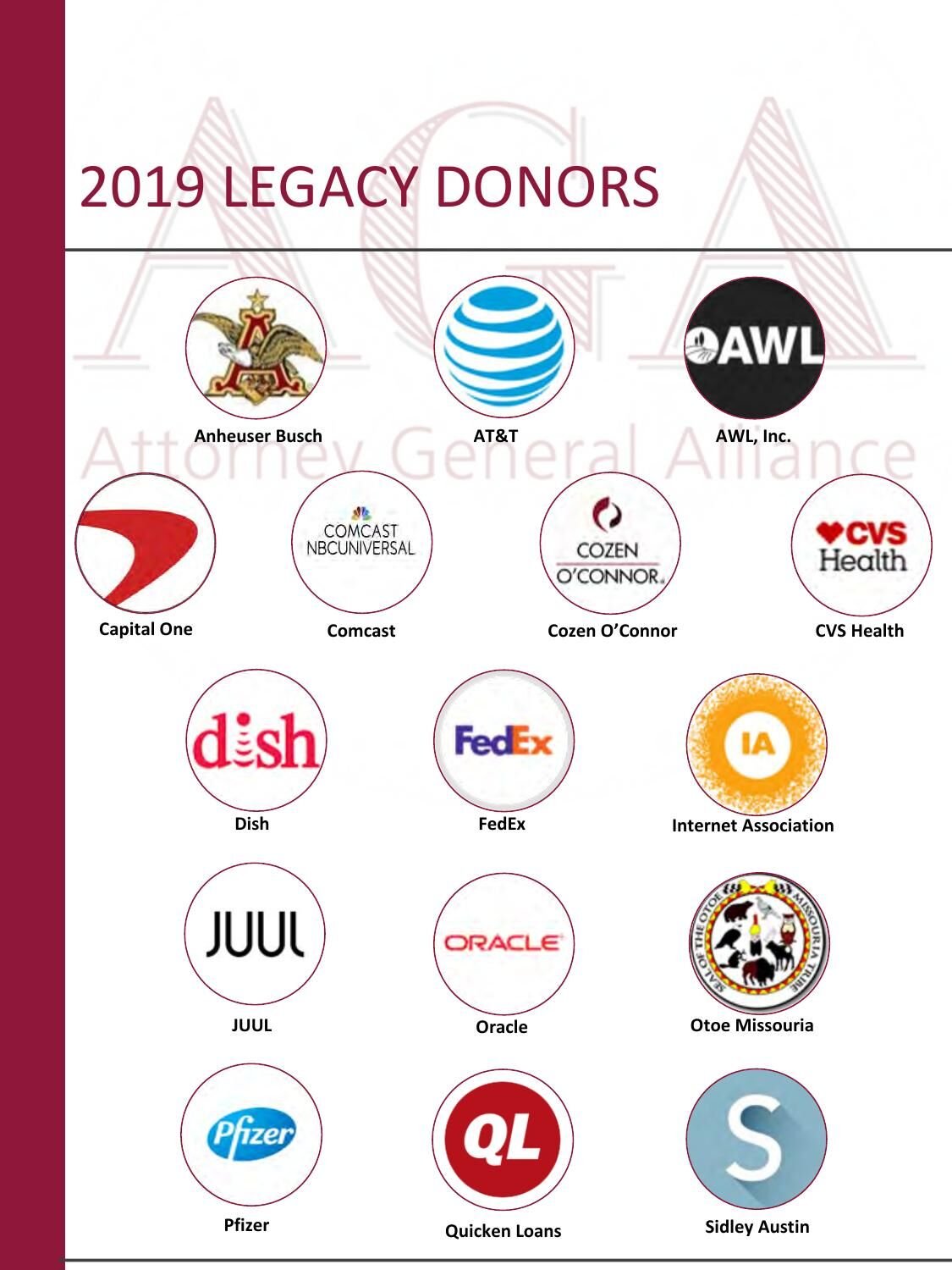 The organization has been criticized for accepting money from companies and businesses its AG members frequently investigate, as well as giving preferential access to those businesses in one-on-one meetings or invitation-only events, some of them in exotic locales. Audits of the organization’s finances show that in 2020, those type of sponsorships made up more than half of its $5.9 million in revenues that year and more than half of the $7 million it collected the year before.

“I have become increasingly alarmed at the growing influence of lobbyist and corporate money in the attorney general arena, particularly involving entities that are being investigated and/or sued by AGs,” Chris Toth wrote the National Association of Attorneys General on June 1, 2022, in a farewell email at the time of his retirement as its executive director.

“In particular, the … Attorney General Alliance seems to exist for no other reason than to provide access by such actors to attorneys general,” Toth wrote. “This places AGs in a very compromising and potentially embarrassing situation. … No transparency exists that allows the public to know who is gaining access to their AG and at what cost.”

For its part, AGA says its main focus is the education and collaboration of attorneys general on issues of concern, such as cannabis, human trafficking, sports betting and cybersecurity.

Comcast and Dish have also been Legacy Patrons to AGA, including the organization’s spring dinner at the Ritz Carlton in Denver on April 21, 2020, according to the organization’s website, which says the event was eventually cancelled.

Spreading the money around

Despite individual attorneys at Cozen O’Connor donating to Weiser’s campaign, records show the law firm itself donates even more to Republican causes, having given more than $180,000 since 2019 to the Republican Attorneys General Association, which supports that party’s candidates for those state offices.

In Colorado, RAGA created Colorado Freedom IEC in September 2022, a political committee that supports Kellner’s candidacy and opposes Weiser, according to its filings with the secretary of state’s office.

Colorado Freedom spent about $300,000 in mail and digital advertising opposing Weiser in September, according to its filings. It spent $49,000 to support Kellner.

Kellner's campaign is the target of a recent campaign-finance complaint with the secretary of state, alleging RAGA held a fundraiser on Aug. 28 for Kellner at The Broadmoor and that Kellner failed to disclose expenditures or in-kind donations related to the event.

The matter is pending.

Democratic U.S. Sen. Michael Bennet and his Republican challenger Joe O'Dea met for their final debate Friday night in Fort Collins less than two weeks before ballots are due and Colorado voters decide if the GOP can gain ground in an increasingly Democratic state.