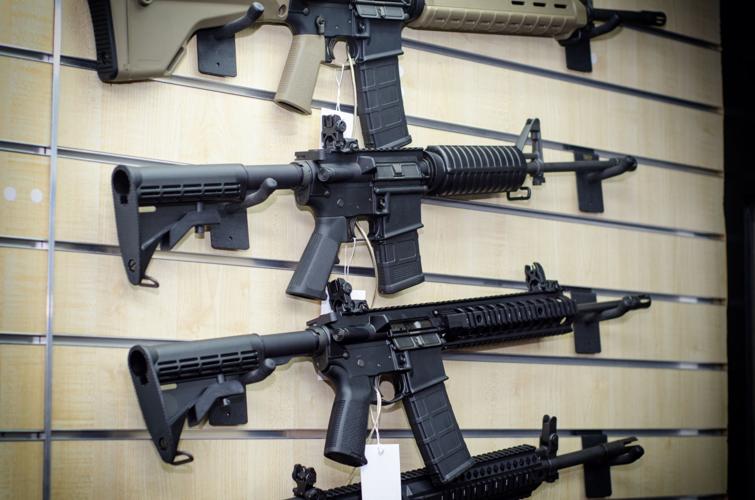 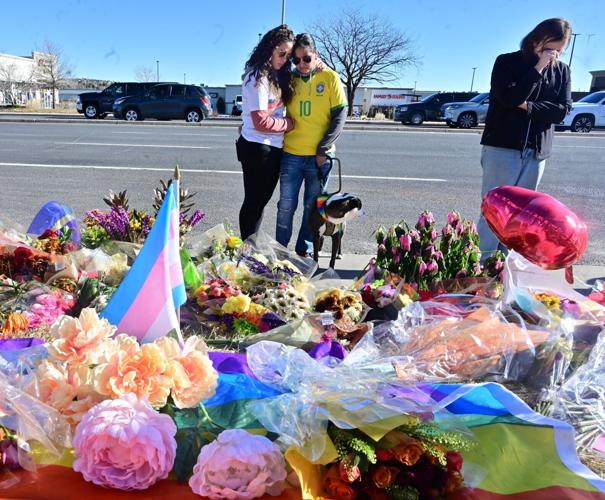 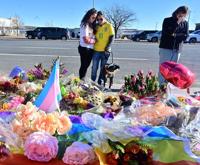 Anne Rivera, Jez Rivera and Aiden Fletcher (left to right) mourn at the scene of a growing memorial for those who came to mourn for the five people who were killed at Club Q on Saturday night. Both are regulars at the club. Monday, Nov. 21, 2022. (Photo by Jerilee Bennett, The Gazette)

Anne Rivera, Jez Rivera and Aiden Fletcher (left to right) mourn at the scene of a growing memorial for those who came to mourn for the five people who were killed at Club Q on Saturday night. Both are regulars at the club. Monday, Nov. 21, 2022. (Photo by Jerilee Bennett, The Gazette)

While a group of lawmakers has been informally talking about preventing gun violence for several years, an effort to formally organize surfaced just days before Saturday's shooting at Club Q in Colorado Springs.

The Gun Violence Prevention Caucus, a group of 20 lawmakers from the House and Senate, is headed by Reps. Meg Froelich of Greenwood Village and Tom Sullivan of Centennial.

Froelich told Colorado Politics Monday the group had been meeting on an ad hoc basis but is now formalizing its role at the Capitol.

An announcement Monday from Giffords, the gun safety organization founded by former Congresswoman Gabby Giffords, said the Colorado caucus will "prioritize legislation that addresses gun violence with proven, equitable, and evidence-based solutions that will save lives and make Colorado communities safer."

Agustin Cabrera, Giffords state legislative manager, said the caucus' formation is a "critical step in the fight to save lives. We look forward to continuing our work with the caucus to ensure the safety of communities throughout Colorado.”

Sullivan, who has been elected as a state senator for the 2023 session, was already working on legislation tied to age restrictions for "assault weapons," a bill he had hoped to run in the 2022 session but was dissuaded by leadership. That restriction, which would bar those under the age of 21 from buying assault weapons, would not have had any effect on the shooting in Colorado Springs, as the suspect is 22 years old.

The other issue is the definition of an "assault weapon."

"It's been 23 years since Columbine and no one has had the courage to at least put a definition into state statutes," said Sullivan, whose son died in the Aurora theater shooting.

He indicated that the definition used in Boulder's city ordinance could help. That ordinance provides five basic definitions of an assault weapon, including:

Sullivan said what legislators will want to know about the shooting in Colorado Springs is what law enforcement knew about the alleged shooter beforehand, why no actions were taken — assuming none was — and how lawmakers can do a better job of making sure people know what actions they could take to prevent the carnage that took place Saturday.

"It's a very narrow group of people who can file a petition" under the red flag law, Sullivan explained. That group includes law enforcement or immediate family members. (The definition of immediate family was a contentious discussion in the General Assembly). He wondered, for example, whether the mother of the alleged shooter was offered any kind of assistance or was directed to resources.

Sullivan also pointed to the relatively-new Office of Gun Violence Prevention, established through legislation passed in 2021. The office's only report to date, issued Nov. 30, 2021, noted it has no gun violence prevention programs under its authority.

Froelich said the caucus would look at what the legislature has already enacted. In addition to the red flag law and creating the Office of Gun Violence Prevention, in recent years, legislators worked on laws on reporting stolen firearms; mandatory safe storage of firearms in homes; closing what's known as the Charleston loophole, which allowed a gun to be sold after three days even if the background check had not cleared; and, allowing municipalities to enact stricter gun control regulations than is currently in state law.

"Nothing happens on this issue without an uphill battle," Froelich said. "We've put in that sweat equity and passed some terrific legislation."

The questions, she said, are how those laws are being implemented, and whether the enforcement is appropriate.

There's already good data on the effectiveness of the red flag law law, she said. "We want more of that."

If the law exists but there's isn't enough education or it isn't being enforced, lawmakers will need to look at that, she said.

The next step is to look at what other states are doing and they can turn to the work of national and local gun violence prevention groups, she said.

Froelich hopes to find out soon what legislation will require a heavy lift, and what can be framed as "common sense" that would then earn bipartisan support.

Duran told Colorado Politics Monday that her heart goes out to the families and friends of the victims and the LGBTQI+ community in Colorado.

"We must do more to reduce gun violence and stop the hateful rhetoric that is threatening the safety of LGBTQ people," said Duran, who has sponsored some of the gun-related legislation. "I join with my colleagues in wanting to look at how we can make [the red flag law] more effective. We won't be back in session until January, and I appreciate the hard work lawmakers are undertaking to develop common-sense policy solutions that will save lives."

The impetus for forming the caucus is to ensure the conversation isn't reactive, common after a tragedy, such as the Club Q shooting, Columbine, Aurora Theater, or Boulder King Soopers.

"These tragedies occur every day," Froelich said. "We want this conversation to occur every day under the dome. By coming together and saying it's a priority for us, it will make a difference."

The caucus also wants to support members of the legislature who experienced gun violence or its aftermath, notably Sullivan and Fields, who have both lost children to gun violence.

"These tragedies, like the one in Colorado Springs, are a combination of hate and access to guns," Froelich said. "I don't know what to do about hate. It breaks my heart. It gets me disheartened and frustrated. I can do something about access to guns."

However, Republicans, like Senate Minority Leader Paul Lundeen of Monument, believe the focus should be on mental health.

"We need to wait and see what policy offerings are made," he said, adding the day after a shooting is not the best time to do that

The GOP caucus has been clear that the important piece is the mental health of an individual, Lundeen said.

Rather than an age restriction on assault weapons, what's beneficial, for example, is to provide mental health services "so we don't find ourselves in these circumstances," he said.

The ability to take away a person’s freedom is one of the most serious powers held by a government. An arrest affidavit is a key document expl…