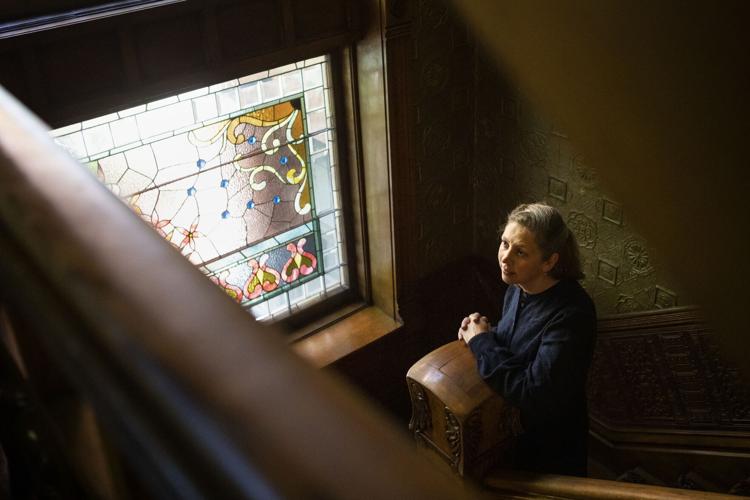 Outgoing Historic Denver executive director Annie Levinsky poses for a portrait in the entry stairwell next to stained glass windows that were restored in 2018, as seen on Wednesday, June 15, 2022, at the Molly Brown House in Denver, Colo. (Timothy Hurst/The Denver Gazette) 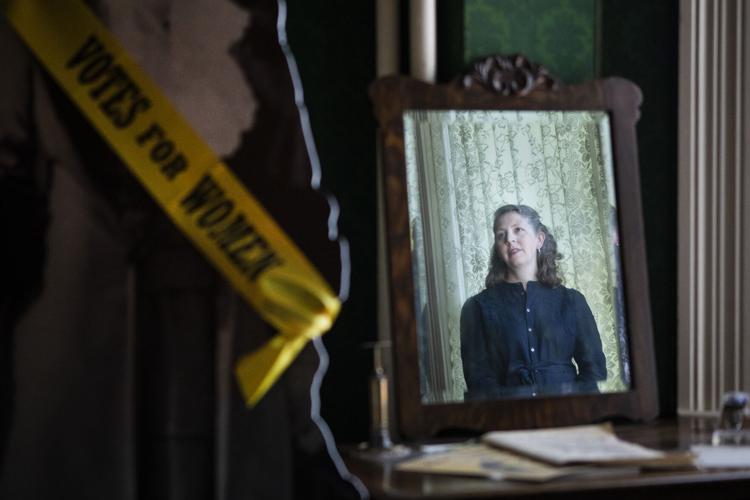 Outgoing Historic Denver executive director Annie Levinsky is reflected in a mirror while posing for a portrait in Molly Brown’s bedroom on Wednesday, June 15, 2022, at the Molly Brown House in Denver, Colo. (Timothy Hurst/The Denver Gazette)

Outgoing Historic Denver executive director Annie Levinsky poses for a portrait in the entry stairwell next to stained glass windows that were restored in 2018, as seen on Wednesday, June 15, 2022, at the Molly Brown House in Denver, Colo. (Timothy Hurst/The Denver Gazette)

Outgoing Historic Denver executive director Annie Levinsky is reflected in a mirror while posing for a portrait in Molly Brown’s bedroom on Wednesday, June 15, 2022, at the Molly Brown House in Denver, Colo. (Timothy Hurst/The Denver Gazette)

Her 14 years of work as the executive director of Historic Denver Inc. literally shaped how many parts of the city look today and will look into the future.

The 42-year-old Denver native will move on from the non-profit organization she’s served for 19 years at the end of the month and assume the duties of History Colorado’s chief of staff.

“The impact she’s had on preservation in this city will last for generations,” said Board of Trustees Chair John Lucero on Historic Denver’s website. “And thanks to her tireless efforts, Historic Denver is well-equipped to serve its mission for the next 50 years and beyond.”

“As our market develops quickly, she’s been a tremendous voice mediating issues between the (Denver) building department, preservationists and developers,” said Charlie Woolley, founder and president of development company St. Charles Town Co. “She’s been a great voice of reason and a big help to developers, as well.

“She’s the most sensible and well-mannered preservation advocate in our community.”

“Annie is such a perfect addition to our team for so many reasons,” DiPrince said. “Clearly, she’s a loyal and trustworthy person, which I think is really helpful when you are doing the kind of work that we do. … She’s well-respected and has great community connections and relationships that are really important to our work.”

Levinsky said she’s been interested in history from a very young age. She’s an East High School alum and got a liberal arts education at Colorado College. She spent the first year after college at the Boettcher Foundation, exposed to the nonprofit world early in her career and looked for something “that had some nexus with history.”

Enter Historic Denver, where she landed an internship. She spent half her time at the Molly Brown House and half at the organization’s headquarters.

“I quickly realized it was a great fit for me,” she said. “It’s a combination of general history and story telling. … It gave me a deep appreciation for the places that make Denver unique.”

While many believe history is just for studying and looking at from afar, Levinsky has come to a different realization.

“I’ve developed and honed really a sense of how relevant history is to everyday life, learning and inspiration,” she said. “It’s the diversity of the city story and figuring out how to share it so everyone sees themselves represented.”

It became obvious during the pandemic just how important our places are.

“Everyone felt so unmoored with all that was happening with work, our local community and landmarks only became more important in that process. It made us feel tethered,” Levinsky said. “It’s easy to think ‘this is the worse it has ever been,’ but history helps show we’ve overcome hardships before.”

As during the Great Recession. That’s when development stopped in the City of Denver, and didn’t start again until about 2012 when it returned with a vengeance to make up for lost time.

“We went from zero to 90 pretty quickly over the course of the last decade,” she said. “There were some transformative projects that supported a lot of adaptive reuse … Many saw the value of how old buildings meet the new need of a city.”

She points to redevelopment projects like Union Station, the transformation of the Emily Griffith Opportunity school into a modern hotel, the National Western Center, Loretto Heights and others. Levinsky spent five years working to get La Alma Lincoln Park into a new cultural historic district. It was the first of its kind for Chicano heritage in Denver.

She’s also drawn the ire of the development community at times, some of whom believe it’s easier to raze and rebuild.

“Complex infill, which by definition always has existing neighbors, almost always has controversy,” White said. “Most of my interactions with (Levinsky) have been on the opposite sides of the table.”

In those 12 or so interactions, several were “hostile historic designations” where area residents can oppose a developer and landowner when it comes razing versus saving a potentially historic building.

“I really appreciate that fact that no matter how contentious it was, no matter how far down the road we were, Annie would always take a meeting with me and my clients to talk about potential resolution,” White said. “I so very much appreciated that, because that’s not always the case with everyone who’s been on the other side of the table.”

“Annie has been really good about understanding the economics of a situation and trying to help developers find solutions,” said Woolley, who is a former Historic Denver board member. “I’ve never seen her get confrontational or argumentative.”

The founder of St. Charles Town Company has become known for his crafty adaptive re-use projects with landmark buildings and an eye toward affordable housing.

Asked about her leadership style, Levinsky said she’s worked to be approachable and “always be willing to talk and listen respectfully.

“A lot of developers appreciated that and were glad to see Historic Denver work that way — consistently,” she said. “I brought our values forward time and again. I’m passionate because I love this city, its history and its places. When that comes out, others get inspired and excited too.”

She also brings the big picture and “having the long view.”

“A lot of property owners were opposed to the protection from the Lower Downtown Historic District (passed into law in 1988),” she said. “They don’t anymore.”

As Denver communities are gentrifying and land prices continue to soar, there’s “some urgency around capturing the stories that honor and recognize things that make Denver a distinctive community,” she said.

“I’d like to point out it’s a misnomer that we’re opposed to new development. We’re not,” she said. “There are a number of developers committed to that distinctive project, where it stands out. Some people really care about the story of a place, or remember it from childhood. (Adaptive reuse) is going to make your project stand out from yet another apartment building. We’re seeing a lot of that sameness from every city in the American West.

Levinsky is most proud of the work Historic Denver did recently to fundraise and invest $1.2 million into the Molly Brown House, where her career began.

“It’s kind of the entry point and conduit for people to fall in love with Denver architecture,” Levinsky said. “It’s one of the most important and successful women’s history sites in the country. I’m really proud of that.”

South Metro Fire Rescue responded to a fire in a residential triplex on Hummingbird Drive in Castle Pines Village, according to a tweet from t…

Wet your whistle and get a taste of the Old West at one of these five historic bars in Colorado.