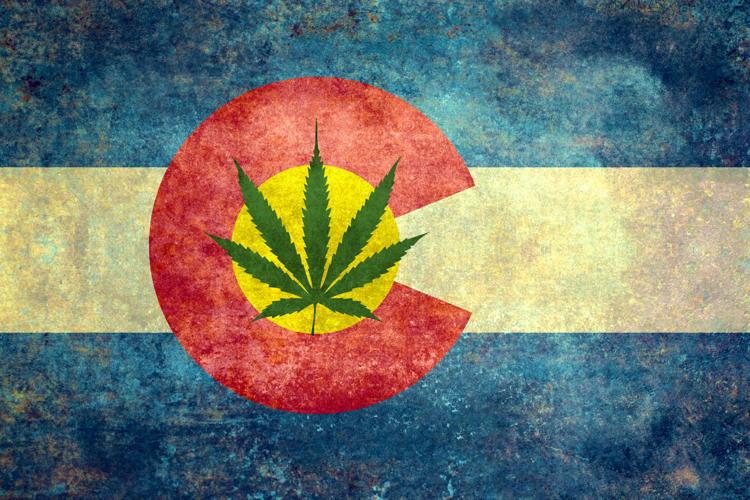 Cannabis sales continue to decline, according to the Department of Revenue. 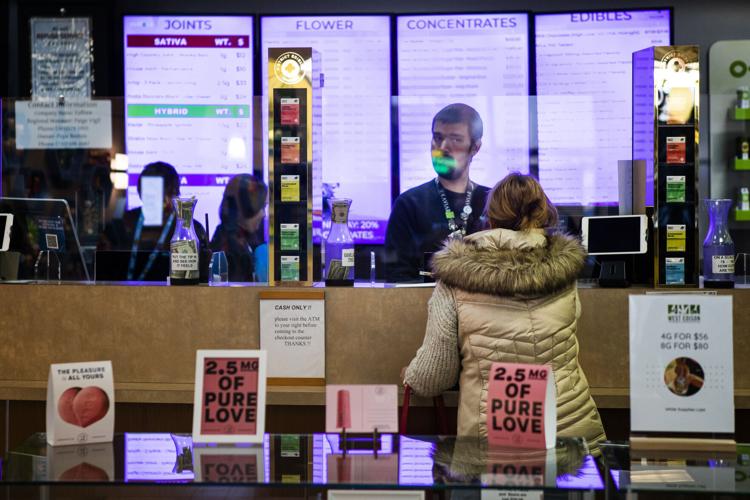 FILE PHOTO: A customer works with bud tender Jason Mckee at Euflora Recreational Marijuana Dispensary. Sales are down substantially, by $72 million over their highwater mark during the pandemic summer of 2020, according to Colorado Department of Revenue. But for medical marijuana the drop-off has been much more pronounced, down by $25 million or 58% over that period. 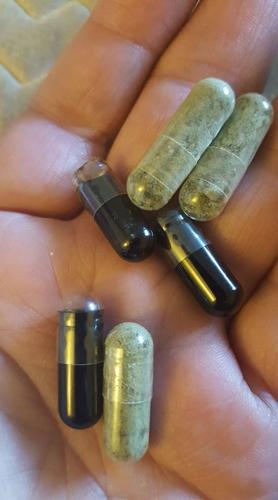 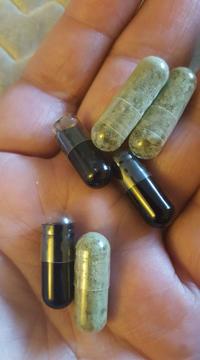 Capsules of concentrated cannabis, including dark gel-caps of oil, and dried cannabis in the lighter shade caps.

Cannabis sales continue to decline, according to the Department of Revenue.

FILE PHOTO: A customer works with bud tender Jason Mckee at Euflora Recreational Marijuana Dispensary. Sales are down substantially, by $72 million over their highwater mark during the pandemic summer of 2020, according to Colorado Department of Revenue. But for medical marijuana the drop-off has been much more pronounced, down by $25 million or 58% over that period.

Capsules of concentrated cannabis, including dark gel-caps of oil, and dried cannabis in the lighter shade caps.

Julie Richardson moved to Colorado from Louisiana in 2015, specifically to get the quality of cannabis-derived medicines available here — which were illegal or too expensive back home.

Now Richardson, who suffered a spinal injury when she was six months old and who has gone through repeated reconstructive surgeries and a cancer battle, thinks she may need to move again.

Sales of all marijuana products in Colorado are down substantially — by $72 million over their highwater mark during the pandemic summer of 2020, according to the Colorado Department of Revenue.

But for medical marijuana, which makes up just a fraction of the Colorado market, the drop-off has been much more pronounced, down by $25 million or 58% over that period.

That sudden decline has reignited a policy debate over the future of cannabis that smoldered for years after voters first legalized medical marijuana in 2000.

Current declines are forcing medical providers to make deep cuts, and, for some, to close their doors, according to Truman Bradley, spokesman for Marijuana Industry Group, a Colorado trade association for licensed cannabis businesses.

Meanwhile, advocates for restricting the market welcome the drop in sales.

"It’s a good thing because we want to see less drug use, period," said Luke Niforatos, executive vice president of Smart Approaches to Marijuana. He added that he anticipates the decline could be followed by an across-the-board decline in substance abuse, including alcohol use.

"Any drug use is not healthy and not safe," he told The Denver Gazette.

Cannabis proponents say that behind the sales numbers are individual patients struggling to obtain medical marijuana because of rising costs, heightened restrictions, or added procedures by doctors and providers anxious to comply with new legislation.

Who's behind Colorado's magic mushrooms campaign?

Last year, the Legislature approved House Bill 21-1317, which put a cap on the concentrations and volumes that patients could buy in a single purchase.

“I am medically complex,” said Bridget Seritt of Colorado Springs, who has an autoimmune disorder and has taken cannabis products for 20 years as a substitute for chemotherapy drugs.

“I replaced nine prescriptions (with marijuana substitutes),” she said, noting she still has to take some conventional scripts.

Like Julie Richardson, Seritt moved to Colorado in part for access to the medical market. Once here, she founded Advocates for Compassion Therapy Now, which she says ranks as the state’s largest advocacy group for patients needing medical cannabis.

Seritt, who says she requires high dosages, contends that the new legislation has made it impossible for her to find concentrations she needs. Although she carries a special exemption card, she says that in the bill’s wake, some dispensaries will not honor it.

And that, Seritt says, has forced her to resort to the black market.

“I’m completely disabled,” Seritt said. “Now, I can’t get the amounts I need, and prices have gone up exponentially."

MIG’s Bradley said he is sorry but not surprised to hear that some patients might reach for the illegal market. He added that fears about compliance have followed in the wake of the new legislation, and that some doctors are unwilling to write waivers for the meds that patients say they need.

“No one wants to come close to where that line is,” Bradley said.

“I would spend $450 a month before the pandemic, and I’m looking now at a good hundred more,” Julie Richardson said.

Marijuana sales in Colorado off by $72M over pandemic high

The simple costs of reregistering for med cards and obtaining new prescriptions are thwarting the market, according to Advocates for Compassion’s Seritt.

Cards cost $29.75 and renewal costs are minimal – $25. But the required doctor visits can run considerably more.

Patients also complain that the mom-and-pop providers, who are most affected by the uphill market, are often better at serving their needs than the corporate retailers who can absorb the changes.

She notes that she has adverse reactions to certain strains and to CBD and has to watch the labels closely when purchasing. Smaller dispensaries that cater to meds are much more responsive to needs like that, she said.

The state’s Medical Marijuana Registry shows that the number of medical cards in circulation as of August has dropped 17% since their high of 89,978 during the pandemic. The all-time high stood at 128,698 registered users in 2011, before recreational marijuana was legalized.

How many of the missing registrants are compromised patients, and how many are users who are moving to the more accessible recreational market?

“Anybody who was riding it has probably already left,” Seritt said. “We’ve had a significant loss of patients, and a lot of that was accessibility.”

There could be, she added, a group of medical users that don’t need much of the drug and migrated to the recreational side, which doesn't require any license.

“But when you become medically complex, then things look very different,” she said.

Meanwhile, Smart Approaches to Marijuana's Niforatos says he doesn’t distinguish between medical and recreational use. While he concedes that a narrow set of patients may benefit from medical marijuana, the program in Colorado "shouldn't be as big as it is right now."

He attributes the decline of both markets to the retreat of the pandemic, as Americans emerge out of isolation and a stay-at-home mindset. Sales of both alcohol and marijuana soared over that span, he noted.

"Addiction is a disease of isolation," said Niforatos. "What we learned from this is we need to find healthier mechanisms for coping with isolation and uncertainty," he said.

Both sides note that the Colorado market has also suffered a loss of out-of-state purchasers, as cannabis becomes more available nationwide.

The debate over the parameters of marijuana policy is not over.

On Nov. 8, legalization is on the ballot in another five states — Arkansas, Maryland, Missouri, North Dakota, and South Dakota.

Colorado Springs voters will consider two recreational marijuana questions in November. One would allow only the existing 115 medical shops to transition to recreational sales if the owners choose, and the second would impose a 5% special tax on recreational marijuana sales. If the tax question passes, the revenue would be dedicated to public safety, veterans services and mental health programs.

Local proponents backing the question say the city has missed out on $150 million in potential tax revenue because residents are buying recreational marijuana in other communities, such as Pueblo, Manitou Springs and Denver. While opponents, such as Mayor John Suthers, say marijuana revenues will not cover its associated costs and legalization has not forced out the black market, as the industry promised when recreational marijuana possession was legalized.

Julie Richardson said medical marijuana has provided huge benefits over the conventional scripts she used before, and that a tighter market — including having to make more trips to the dispensary — has burdened her with fears about the vulnerability of her immune system.

“I’m very fragile,” Richardson said. “Only being able to buy less than a week’s worth of concentrates is forcing me to be in public, literally exposing a cancer patient.”

All of that has Richardson wondering if she needs to search for a new market that offers more promise for a patient with her stringent needs.

“When my cancer came back, I realized I needed better medicine,” Richardson said. “Now, I feel like those benefits I moved here for have disappeared.”