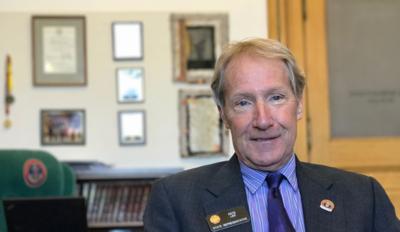 State Sen. Pete Lee, D-Colorado Springs, will chair an interim committee of eight legislators appointed to study whether changes are merited to how the state investigates and disciplines judges.

The final Senate Republican member is Rep. Kevin Van Winkle of Highlands Ranch, who was just named to fill the unexpired term of Sen. Chris Holbert, R-Parker, following the latter's move to Florida. Van Winkle’s appointment to the committee is contingent on his being sworn into office, which is expected June 13.

The committee has scheduled its first public meeting — all of its gatherings must be open to the public, according to the legislation that created it — for June 14. It will meet at least four times through the fall.

“I am pleased with the appointment of experienced and knowledgeable legislators to this committee so we can hit the ground running on these issues that are so important to re-establishing public confidence in the judiciary,” Lee told The Denver Gazette. “We are preparing to have testimony from national and local experts on judicial discipline.”

The committee will take on 17 different aspects of how judges are disciplined, which is currently handled by the Colorado Commission on Judicial Discipline.

Some of the areas the interim committee will explore include whether to continue allowing the Colorado Supreme Court to create the discipline commission’s operating rules, govern commission decisions, and select four of the 10 members who serve on the body.

Additionally, the committee will study whether voters should be asked to consider a constitutional amendment to how the commission is created and how it functions.

The committee is expected to take testimony from a broad swath of experts and laymen. The Senate bill that created the committee — Lee and Gardner were its chief sponsors — briefly contained a 12-member advisory panel that was primarily made up of lawyers and others in the legal profession and was the result of backroom lobbying by the Judicial Department.

That provision was eventually gutted and replaced by a requirement the committee solicit input from a cross-section of professionals and other stakeholders affected by the judiciary, including the general public.

The legislation is the direct result of a half dozen investigations launched into the circumstances surrounding a multimillion-dollar contract given in 2019 to a former Judicial Department official who faced firing. That official, former Chief of Staff Mindy Masias, allegedly threatened a tell-all sex-discrimination lawsuit in which the undisciplined conduct of several judges was to be exposed.

The legislation tackled that issue and, for the first time in years, independently funded the commission with more than $1 million in taxpayer dollars. Previously, the commission was funded by attorney license registration fees controlled by the Supreme Court and doled out by the Office of Attorney Regulation Counsel.

The commission will explore how other states handle judicial discipline to see whether Colorado’s method needs changing. Currently, all judicial discipline is secret unless the Supreme Court chooses to make it a public sanction. Annual reports of the commission’s work typically show when discipline has been meted out but never identify the jurist or the jurisdiction in which that jurist serves unless it is a public sanction, which is rare.

Judicial discipline in some states is a very public affair with the identities of the judges, the outcomes of the investigations against them and any subsequent punishment a public record.