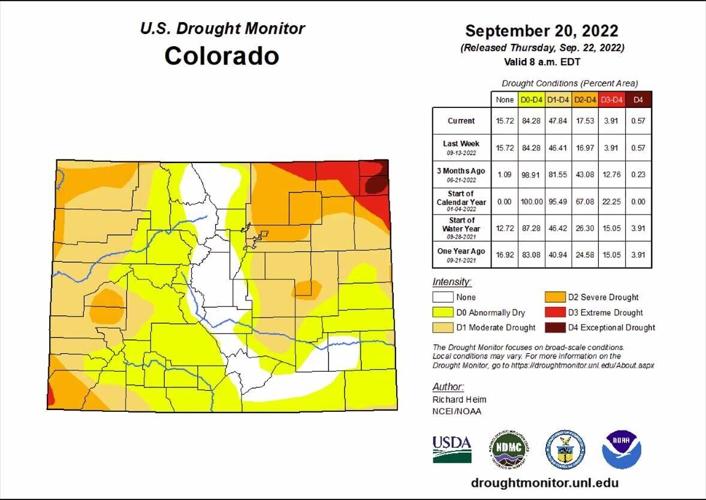 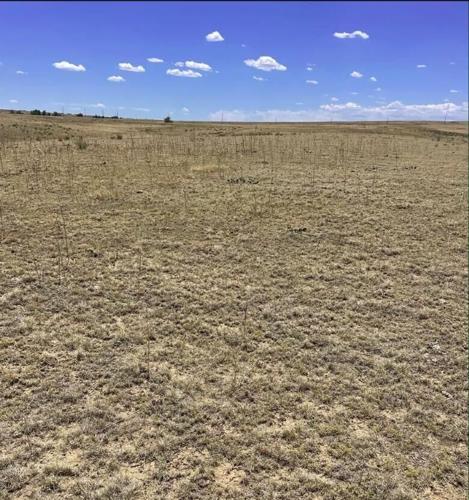 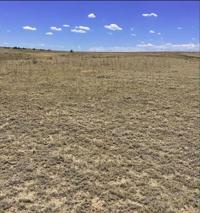 While the summer rains have helped, there's still a lot of drought. Photo courtesy Arapahoe County. 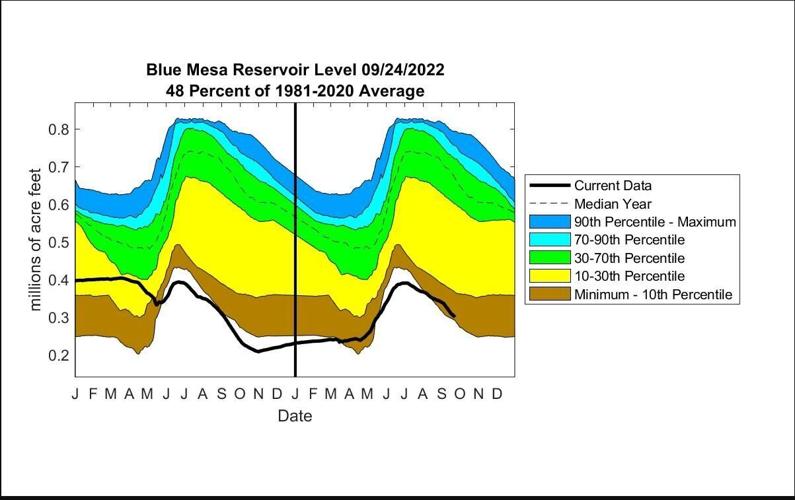 Blue Mesa reservoir levels, which haven't recovered since being tapped for 36,000 acre-feet of water to help levels at Lake Powell. 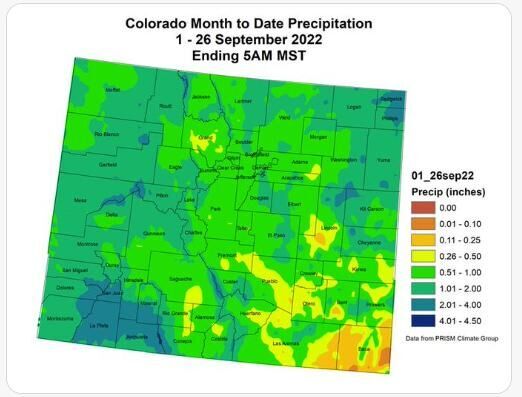 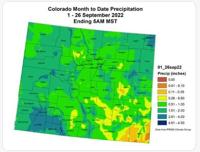 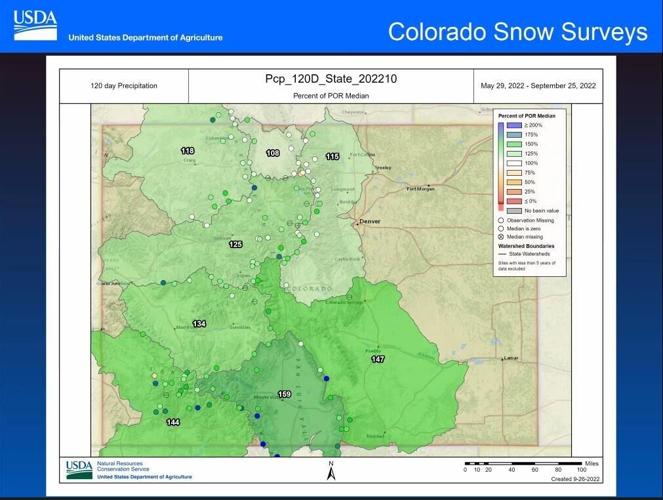 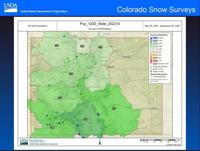 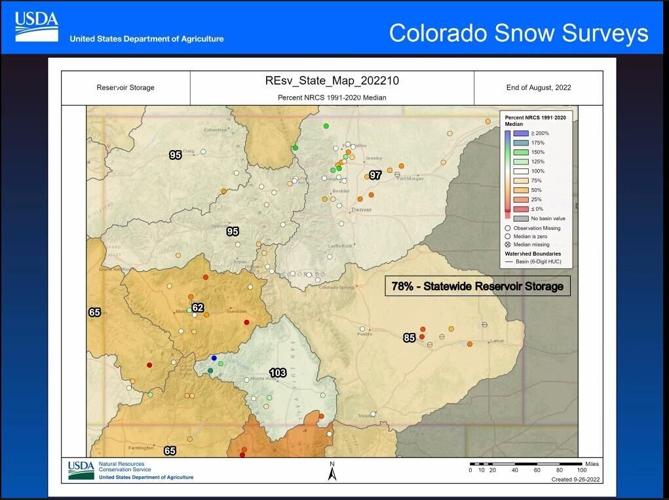 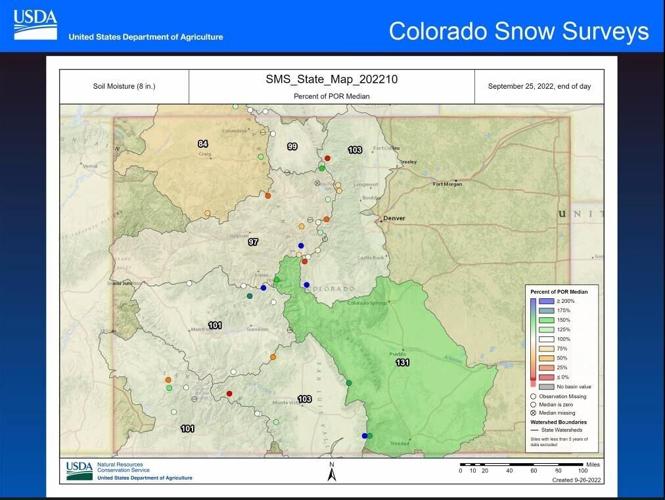 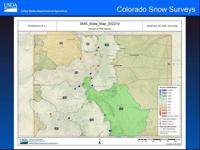 While the summer rains have helped, there's still a lot of drought. Photo courtesy Arapahoe County.

The best summer for precipitation since 2014 produced rare optimism among one of the state's water watchers, but it is tempered with concerns about a third straight La Niña fall, which is likely to bring hotter and drier conditions.

And that isn't good for winter snowmelt, because those conditions leave soils drier. In turn, that dry soil becomes the first stop for snow rather than reservoirs and streams.

The rains during the summer of 2022 produced a half-inch of moisture statewide above the average, the most in the last seven years, according to both Becky Bolinger, the assistant state climatologist with the Colorado Climate Center at Colorado State University and Brian Domonsko with the USDA's Natural Resources Conservation Service. Both discussed the latest water conditions as part of Tuesday's meeting of the state's Water Availability Task Force.

But that precipitation didn't reach the entire state, and two areas - the northeastern plains counties of Sedgwick, Yuma, Logan, Weld, Phillips and Montezuma County, in the Four Corners area - are still facing extreme drought. Montezuma County has been in extreme drought for 122 consecutive weeks, Domonsko pointed out. The northeastern plains counties have ranged from extreme to exceptional drought for most of the summer. He did add recent rains in southwestern region may finally get Montezuma out of its extreme drought situation.

Other records set during the summer of 2022: 93 flash flood warnings issued by the National Weather Service, including in the state's worst burn scar areas, according to Bolinger. That, however, did not appear to result in more flash floods.

July's monsoon meant not only improvement in drought for much of the state but also resulted in improved soil moisture, and with the higher humidity, less evaporative demand.

That may be good news for those concerned for the possibility for fall wildfires, as was the case in 2020. High evaporative demand leads to drier surface conditions, and that contributes to higher wildfire danger.

Bolinger said while the fall is expected to be warmer and drier, the La Niña pattern that causes those conditions is expected to weaken by the spring.

"If the fall is warm and dry, that could worsen drought conditions and we would start with another snowpack season at a deficit," she added.

"When you have dry soil moisture and low stream flows going into winter, the soil gets pretty thirsty and snowmelt is absorbed by the soils," he explained.

It's one of the biggest factors on why a near-normal snowpack, such as what happened last winter, results in well-below normal runoff.

The precipitation improvements have been best in the southern half of the state. The region includes the San Luis Valley and the Sangre de Cristo mountains, home to the Rio Grande River basin, and in the Arkansas River basin.

"It feels really good to...highlight the high levels of precipitation for the southern half of the state..." Domonsko said, adding that the state is close to average is "really good news."

Domonsko said he was at the east side of the Sangres last week when it was hit with a one-inch rainfall over two hours.

"It was pretty awesome," he said.

Statewide, reservoir levels are at around 78% of capacity. That level isn't as bad as it's been in the past, Domonsko noted.

However, the low point is still in the Gunnison River basin, and particularly Blue Mesa, which was tapped last year to help improve the water levels at Lake Powell. It still hasn't recovered from its 36,000 acre-feet release, according to Beverly Richards with the Upper Gunnison River Water Conservation District.

While precipitation is much improved - as high as 160% above average, especially in the southern portion of the state - improvements from monsoons was still only a a "few drops in the bucket" when accounting for the state's entire water year budget, according to Domonsko. Optimistically, if soil moisture can remain high until the seasonal snowpack begins to build for the winter, the state would be in a better situation than it's seen in the last few years, he added.

The task force also heard an update on the state's turf replacement program, which was bolstered by legislation passed during the 2022 session. Kat Weismiller of the Colorado Water Conservation Board said House Bill 22-1151 will support development of new turf replacement projects as well as provide funding for existing projects. She estimated there are 22 ongoing projects.

Turf replacement has to be more than just replacing grass, Weismiller said. It also needs to take into consideration irrigation, replacement vegetation and even tree health. And water savings may be lower than expected, she added; savings from turf replacement are not uniform.

The CWCB expects to have the two-year-funded program ready to go by next March, in order to maximize the irrigation season that runs between March and October, she said.

The City of Boulder agreed Friday to pay a couple who own mineral rights inside the city limits $35,000 for interfering with their property ri…