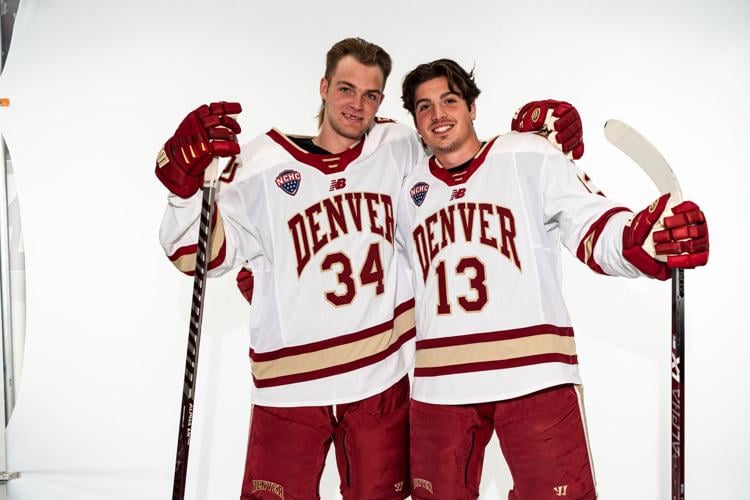 Denver Pioneers sophomores Carter Mazur (34) and Massimo Rizzo (13) pose for a picture at the team's media day earlier this month. 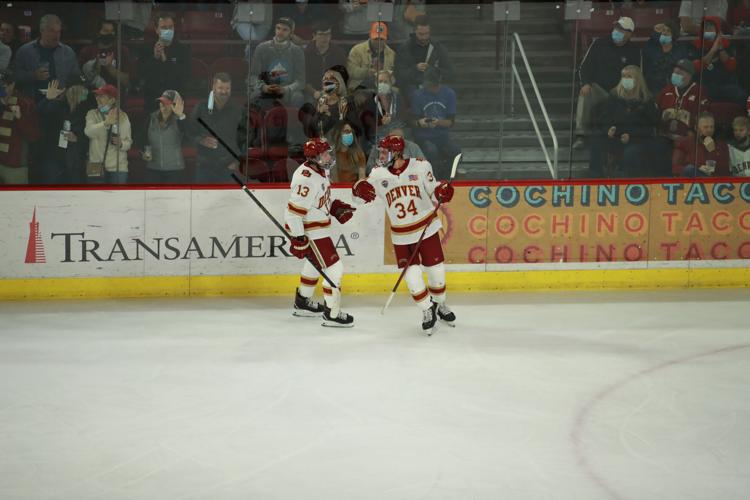 Denver Pioneers forwards Carter Mazur (34) and Massimo Rizzo (13) celebrate after a goal scored in a game against Arizona State on Oct. 8, 2021 at Magness Arena in Denver. 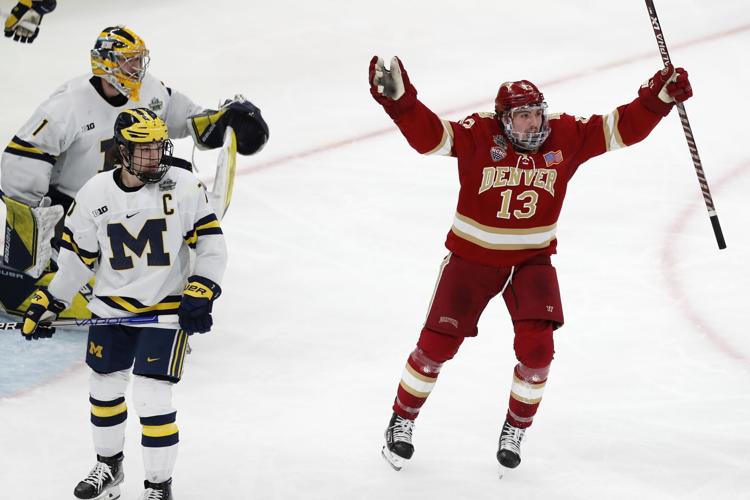 The bouncing puck found its way to Carter Mazur in the neutral zone, and he quickly found himself skating up the ice with one defender between him and the goalie.

In an instant, Massimo Rizzo joined the play to give Denver an odd-man rush with 6 minutes left in the national championship game.

Mazur skated into the offensive zone before sliding the puck to Rizzo, who slapped it into the net. The duo jumped into each other’s arms, knowing they had just scored one of the biggest goals in program history. The Pioneers never looked back, beating Minnesota State in April for the ninth title in program history.

“That play was blacked out in my mind throughout the game, but seeing it on replay was pretty special,” Rizzo told The Denver Gazette. “I couldn’t have asked for a better year. Unbelievable group of guys and we had a ton of fun and obviously to have the season that we did was pretty spectacular.”

No. 1 DU opens its title defense against Notre Dame at Magness Arena on Friday.

The duo of Mazur and Rizzo was an important one for DU as the freshmen were part of a third line that complemented the veteran players that occupied the top two lines. They combined for 26 goals and 48 assists on a third line that also featured senior Cameron Wright.

Now they are sophomores and no longer living in a tiny room together. They’re still inseparable off the ice with larger roles on it. Mazur and Rizzo will likely be the top DU line, and there was no chance they were going to be separated after the success they had last season.

“We’ve got a great relationship off the ice, which definitely helps our game on the ice,” Rizzo said.

Harvard transfer Casey Dornbach has joined them on the top line.

“Casey coming in, he’s a great player. I think he ties in really well with me and [Mazur] and we add a lot to each other’s games,” Rizzo said. “I think we’ll just continue to build.”

Both Rizzo and Mazur had busy summers following their standout freshmen seasons.

“It wasn’t something that I expected to happen, but I’m happy it did,” Mazur said of his time with Team USA.

The top four point-getters from last season have all moved on. That leaves Mazur, who won NCHC Rookie of the Year, as the top returning scorer in the forward group. Players like Bobby Brink, Brett Stapley, Carter Savoie and Cole Guttman left a huge void in the program, and the duo of Mazur and Rizzo is trying to continue the standard set for them as freshmen.

“Unbelievable players, obviously,” Rizzo said. “Just taking little bits of their game and trying to add that to our games will definitely help.”

DU welcomes nine new players, so seasoned contributors like Mazur and Rizzo must carry the torch to the newcomers.

“We kinda already have moved away from [last season] in a way,” Mazur said. “We still have it in the back of our minds that we won last year so we know we’ll have the target on our back, but that’s kinda what we want."

Stellar special teams play gets No. 4 Denver hockey back on track with win over No. 11 Providence

The No. 4 Pioneers returned home Friday night and delivered a special teams masterclass.