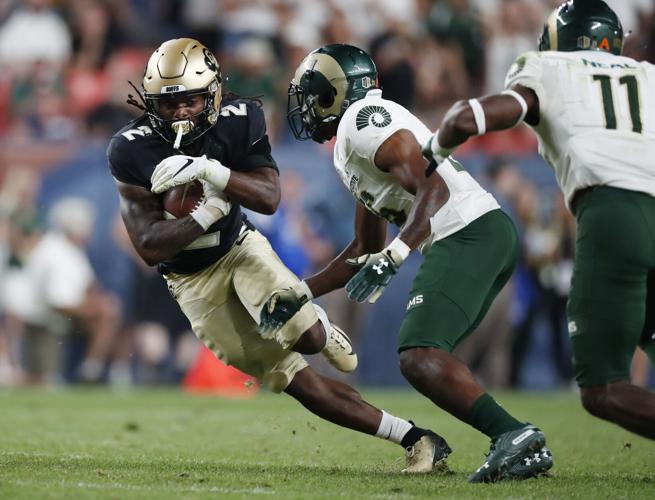 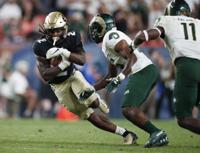 Colorado wide receiver Laviska Shenault Jr., left, runs for a first down as Colorado State cornerback Marshaun Cameron comes in for the stop during the third quarter of an NCAA college football game Friday, Aug. 30, 2019, in Denver. (AP Photo/David Zalubowski) 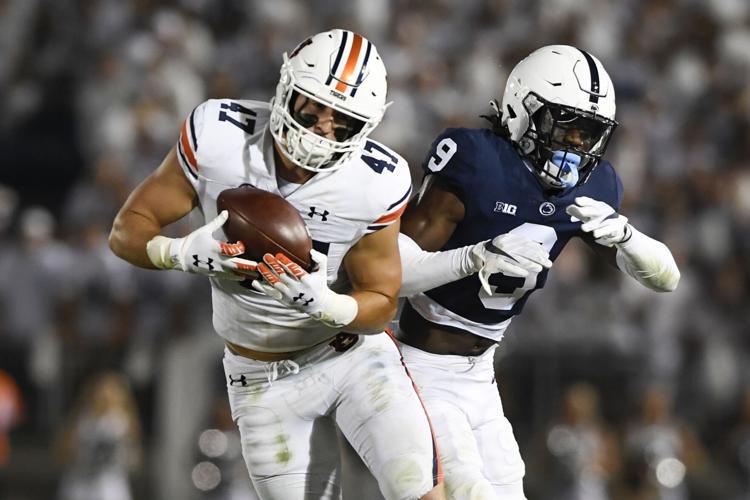 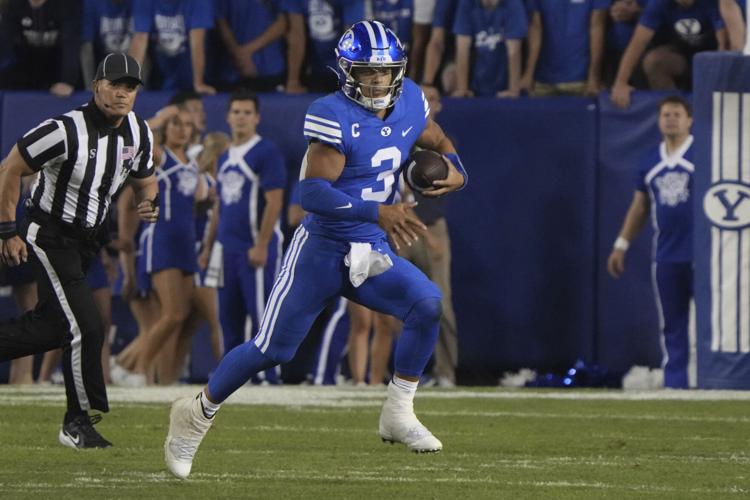 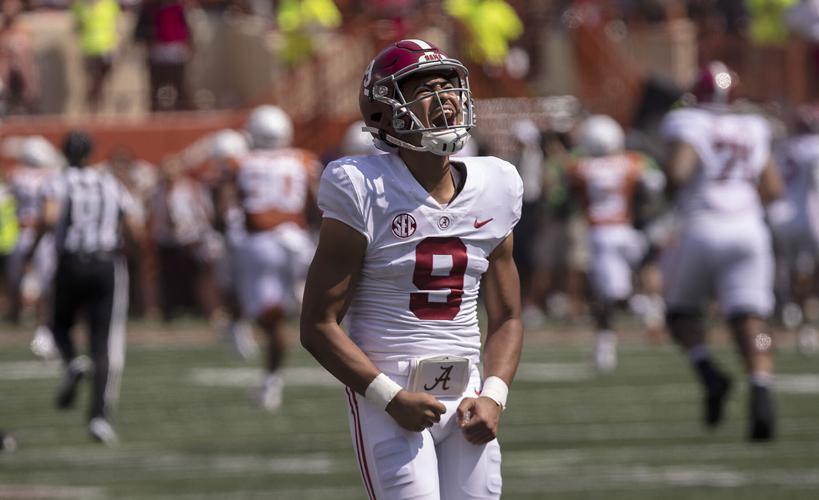 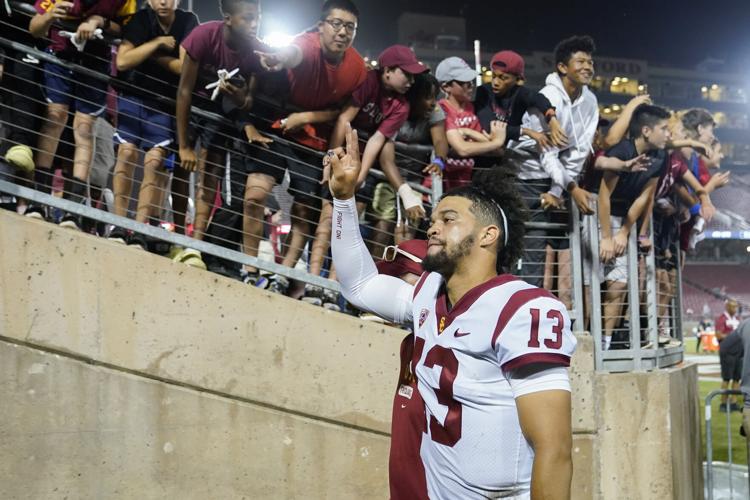 Southern California quarterback Caleb Williams (13) walks off the field after his team's victory over Stanford in an NCAA college football game in Stanford, Calif., Saturday, Sept. 10, 2022. (AP Photo/Godofredo A. Vásquez)

BOULDER — Both Colorado and Colorado State hit the road this weekend to face Power 5 opponents in Week 3.

CU and CSU are in similar situations as programs — in a rebuild. This may be Dorrell’s third season in Boulder, but as I wrote in the College Football Insider it feels like his first and for Norvell in Fort Collins, this is his first season.

So what’s there to gain for CU and CSU in playing teams like Michigan, TCU and Minnesota early in the season?

For Dorrell and Colorado, they want to get back to a place where teams are afraid of playing them in nonconference play, so he doesn’t see a benefit to “scheduling wins” like other Power 5 programs (see: No. 2 Alabama hosting UL-Monroe this weekend).

“We need these kinds of schedules,” Dorrell said this week when I asked about his philosophy regarding nonconference scheduling. “Even though I (know) there’s some people who have a different philosophy about scheduling wins. Some people do that. It’s really important for us to get this program to grow and get larger than where we currently are right now. It was at that point back when I was here in the past. We had the kind of schedule that we’re scheduling now so I’m really more familiar with that.”

I asked Norvell the same question this week, and his response was slightly different.

“I think it’s great when you get a chance to play high-profile programs,” Norvell said. “We’re just not quite ready for that yet with all the changes we’ve had. I think playing teams like Middle Tennessee, they’re a good program from a good conference, it’s interesting for the fans and it’s a good challenge for our team. That’s what we’re going to see for the rest of the year. They’re well-coached, they have good players, but we should be able to match up.”

So whose philosophy is correct?

I tend to agree more with Norvell.

Sure, it’s nice to look at the schedule and see teams like TCU coming to Folsom Field and for the Rams to go on the road and face a program like Washington State. But for both of these programs, what’s the harm in scheduling two easy games in the nonconference schedule and potentially going from three wins to five wins or even four wins to six and being bowl eligible?

No one’s going to look and see what kind of nonconference schedule the Buffs played if CU goes 1-11 this season and people are talking about Dorrell being fired.

Looking forward, Norvell is probably right in saying that nonconference games against teams like Middle Tennessee that provide a good barometer for what they’ll see in conference play are more beneficial than games against Michigan at the Big House.

Jay Norvell, Colorado State dealing with growing pains on and off the field through two games

Now, CU and CSU begin a home-and-home next season that will be important games for regional bragging rights. CU is also beginning a home-and-home with longtime Big 8 rival Nebraska next season, so at least next year’s nonconference schedule will have some buzz for the fans, even if the Buffs win just one or two games this season.

And that should be the real focus, especially for CU, in scheduling future nonconference games. Who knows what college football conferences will look like in a few years? It’s important to get games on the schedule that fans care about. I don’t know if the CU-Utah rivalry will ever really catch on, but fans on both sides will always get excited when the Buffs and Rams meet up. And the same goes for CU and Nebraska.

In a week with few Power 5 matchups, this game at Jordan-Hare is the best of the bunch. Penn State’s freshmen stole the show last week in Happy Valley and now they face a tough road test against Auburn’s talented rushing attack.

The Scott Frost era is over in Nebraska. Now interim coach Mickey Joseph faces a top-10 team in his first game as one of the classic rivalries is renewed in Lincoln. Can Nebraska pull off a shocking upset and pick up the program’s biggest win in years?

BYU is coming off an impressive win over future Big 12 foe Baylor and now road-trips to Eugene. A big performance from BYU quarterback Jaren Hall could have the Cougars on a track toward a darkhorse College Football Playoff run.

Former CU coach Mel Tucker and Michigan State face their first test of the season. Washington has been impressive in Kalen DeBoer’s first season. Huskies QB Michael Penix Jr. is 1-1 against the Spartans from his time at Indiana and could be an "X" factor here.

Massive game for both programs. A 3-0 start for the 'Canes under Mario Cristobal would be a great start in Coral Gables. And Jimbo Fisher’s Aggies are in desperate need of a win to avoid a 1-2 start after last week’s shocking home loss to Appalachian State. The Aggies struggled against the App State run game last week and things won’t get any easier when Miami’s talented back, Henry Parrish Jr. comes to town.

Each week throughout the season, I’ll update who I think are the top 5 Heisman candidates. Here’s my list after Week 2 of the season:

Even though the stats won’t jump out at anyone, Bryce Young led yet another game-winning drive as Alabama avoided an upset in Austin last weekend against Texas. Young has proven he’s just a winner so far in his Alabama career and he’s the reason no one should doubt this Crimson Tide team as long as Young is under center.

Stroud did what he was supposed to last week, throwing for over 350 yards and four touchdowns — even with Jaxon Smith-Njigba out. His stats are undeniably better than Young’s so far this season, but Young’s clutch performance on the road gives him the slight edge over Stroud, who’s won both his games at home this season.

Bennett was solid again as Georgia rolled past Samford. His dominant performance against Oregon in Week 1 is still the reason he belongs this high on my rankings, and he’ll have plenty of more chances this season to vaunt himself even higher up.

I was hesitant to put Williams in my top 5 after Week 1 after he and the Troajns beat up on a bad Rice team, but they took down Stanford in impressive fashion. Lincoln Riley definitely has this USC offense working with Williams under center and they’re on track to be in contention for a Pac-12 title and a playoff appearance.

Richardson was just OK as Florida lost to a good Kentucky team, but I still don’t think there’s a more fun player to watch in college football right now. If he can go into Knoxville next weekend and beat Tennessee, Richardson will jump right back up near the top of everyone’s list of Heisman candidates.

Where you can watch

There’s no shortage of great bars to watch college football in Denver. Here’s our pick this week:

FORT COLLINS — The third game on Colorado State’s schedule looks a lot more daunting today than it did a week ago.