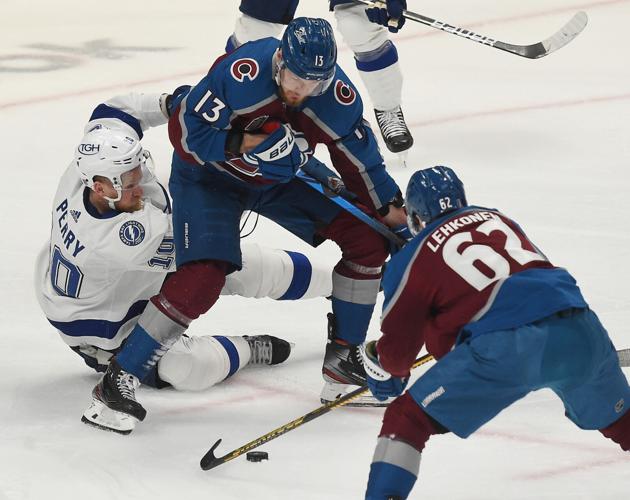 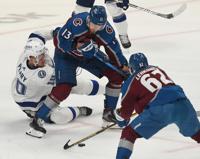 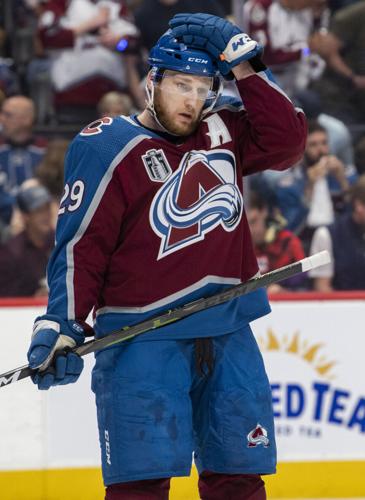 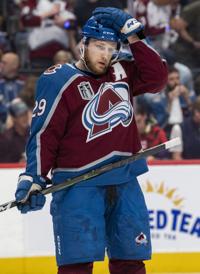 Colorado Avalanche center Nathan MacKinnon (29) prepares for a face off during the first period of Game 5 of the NHL Stanley Cup Final against the Tampa Bay Lightning at Ball Arena in Denver, Colo., Friday, June 24, 2022. (The Gazette, Christian Murdock)

Colorado Avalanche center Nathan MacKinnon (29) prepares for a face off during the first period of Game 5 of the NHL Stanley Cup Final against the Tampa Bay Lightning at Ball Arena in Denver, Colo., Friday, June 24, 2022. (The Gazette, Christian Murdock)

“The sun will come up tomorrow,” Avalanche captain Gabriel Landeskog assured after the Tampa Bay Lightning delivered a Stanley Cup stunner over the Avs in Game 5 late Friday.

Hold that celebration. Hold that parade. As the seconds ticked off the Lightning’s 3-2 spoiler, Avalanche fans reared back and launched half-full Coors Light cans and recyclable "Ball" cups onto the ice at Ball Arena. Hold on tighter than that. After a shocker to tighten the series, a cold one might come in handy to calm these new nerves.

The Avs still lead the series 3-2. They're still in control. But the lessons learned from this awesome Cup final could stick with the Avs for a decade. Game 5 was a lesson in the never-quit fortitude ingrained in a champion, taught by captain Steven Stamkos, Andrei Vasilevskiy and the Lightning. What was supposed to be a coronation of the next Stanley Cup power instead was a reminder how the Lightning built their legacy as two-time defending champs.

Champs don’t back away from a good fight.

Game 6 is Sunday at Amalie Arena in Tampa. Hold on to your seats. Was that Vasilevskiy or Patrick Roy in net for the Lightning? The last thing anyone around here needs is “Vasy” turning into a Stanley Cup hero again. The way he stood up and stopped an Avalanche onslaught with 35 saves — several of which a crowd of 18,000 celebrated as if they were certain to be goals ... Put the party on hold.

On a drizzly night in LoDo, the Lightning found new life. The Avs have a serious scrap on their hands.

“Sometimes you just don’t get the bounces,” Cale Makar said after.

The Lightning stole Game 5 more than the Avalanche lost it. Shots favored the Avs, 37-29. Hits favored the Avs, 43-33. The craziest crowd yet favored the Avs. But the great equalizer is a great goalie who ventures into the zone when the puck looks as big as a volleyball. That’s what Vasilevskiy looked like Friday night to extend the Lightning’s reign and season. He's the concern.

Only the 2009 Pittsburgh Penguins won more playoff games with a comeback than Colorado’s nine (so far). This time the Avs couldn’t come back. In Game 5, the Avs trailed 1-0 (and tied it) and 2-1 (and tied it). Ondrej Palat scored the game-winner with 6:22 left on the clock. The Avs mounted three more golden scoring chances, but each time Vasilevskiy did his thing.

The sun will come up tomorrow, the captain assured, but boy it’s going to be a stressful weekend for Avs fanatics. Here, maybe this will help: only one team has come back from a 3-1 deficit to win a Stanley Cup Final. That was the Toronto Maple Leafs a long time ago, in 1942.

This city was set for a party like LoDo hasn’t witnessed for 21 years. The cheapest seat on Ticketmaster was going for a cool $1,662, a spot way up in Section 342 where a tall man could hop and touch the ceiling. The Light Rail “E Line” that departed Colorado Station at 4:19 p.m. had a doobie passed around and chants of “We want the Cup!” echoing through the train car. Outdoor watch parties across the street in the Tivoli Quad, and over by Coors Field in McGregor Square, were packed to capacity. Probably over capacity, actually, but who’s counting?

The last win's going to be the toughest. Tampa’s now 4-0 in potential elimination games over the last three postseasons. And for a third straight game Vasilevskiy held the Avs to a mere two goals in regulation. That’s a goalie in the zone. That’s the last thing the Avs needed to see.

“It was never going to be easy and it won’t be easy,” Landeskog said.

The party and the parade must wait. Hold on tight.