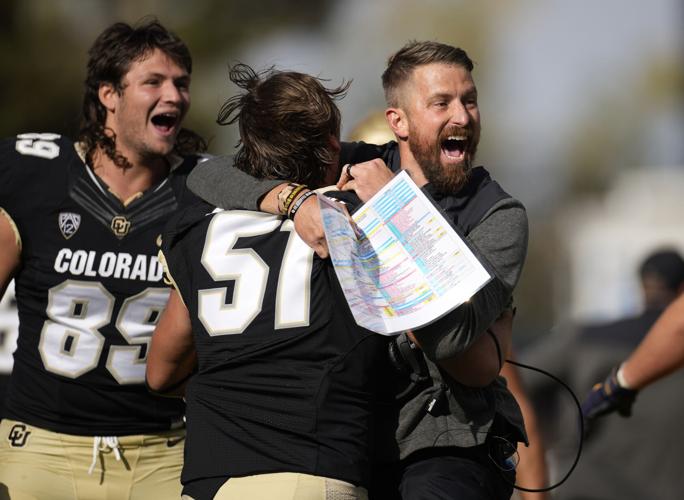 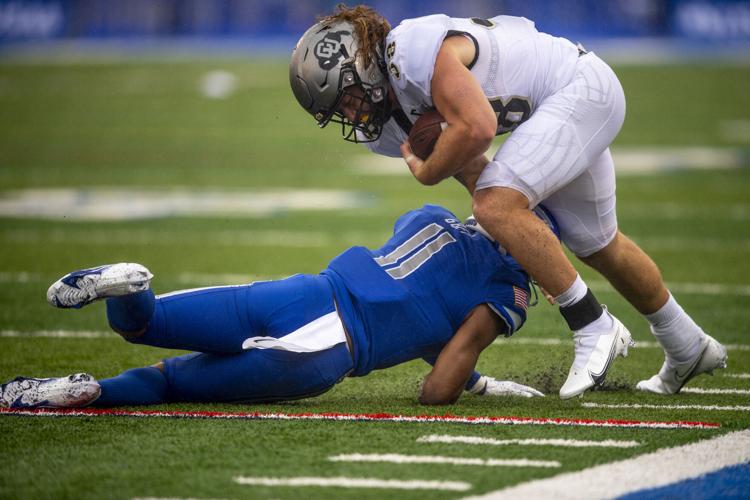 Colorado Buffaloes tight end Brady Russell (38) is pushed out of bounds by Air Force Falcons safety Camby Goff (11) during the third quarter of the game at Falcon Stadium in Colorado Springs, Colo., on Saturday, Sept. 10, 2022. The Falcons won 41-10. (The Gazette, Parker Seibold) 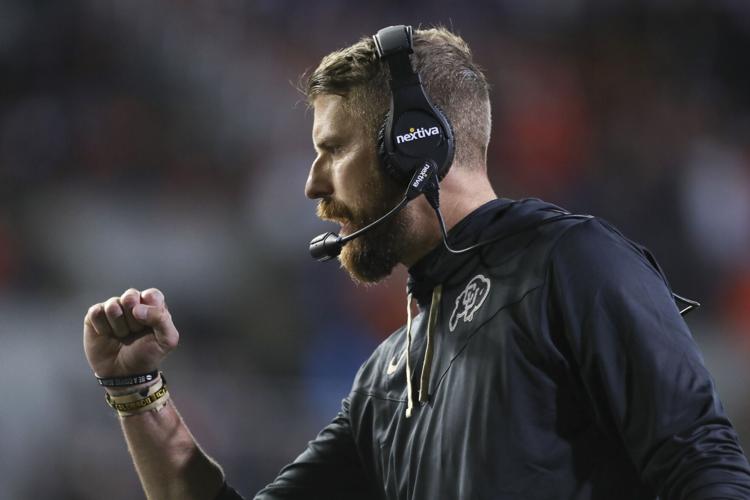 BOULDER — Tommy Brown hasn’t been at Colorado a full year, yet there are players on this Buffs team he says will be in his wedding.

This is a guy who won all there is to win over four years at Alabama, but still says the CU coaching staff during a 1-win season is his favorite.

“Every team is a family, every family has its issues,” Brown said Tuesday. “This team is no different, of course, but how close the players on this team are is insane. What we’ve gone through, how close we’ve gotten, I don’t regret it whatsoever.”

This season could’ve gone very differently after the first five weeks. When Karl Dorrell was fired after the 0-5 start, the transfer portal opened for a 30-day stretch for all CU players and only one decided to leave — quarterback Brendon Lewis. It's a young team, and there are some talented players on the roster that other programs would’ve loved to woo away from Boulder. But none of that happened.

“I think that’s definitely a testament to how close we are as a team,” senior tight end Brady Russell said. “Nothing brings you close like being miserable together.”

There might not be a single person in the CU program that’s seen more than Russell has. Running backs coach Darian Hagan is the only person on the playing roster or coaching staff whose arrival predates Russell’s.

The Fort Collins kid arrived following the magical 2016 season where the Buffs made the program’s only appearance in the Pac-12 Championship Game since joining the conference. He witnessed the 5-0 start in 2018 and the 4-2 COVID season, but other than that, he’s witnessed, mainly, a lot of losing.

“I think there was still a lot of cultural damages from the, at that point, 12 years of losing seasons and everything,” Russell said. “We had high expectations for that [2017] season and I think guys got a little too high on their horse after having such a good season and then we didn’t perform the way we should’ve and win as many games as we should’ve.”

But Russell, who will play his final college game Saturday against Utah at Folsom Field, believes the culture inside the CU program is finally improving — even though, in all likelihood, yet another new coaching staff will likely take over in a few weeks, there will be a solid, established culture to build on.

“I think we’re on the right track right now,” Russell said. “The culture is going in the right direction.”

A lot of that has to do with how much of an impact interim coach Mike Sanford has had in his brief time with the program, and even shorter time at the helm.

“We all love him,” Russell said. “He’s been a huge part of this program. He’s helped me out a lot and I know he’s helped a lot of guys out on a personal level. The way he’s been committed to us, even though he got here at a crappy time to get here, it’s been cool to see the way he fights and brings energy every single day, despite the circumstances.”

If all that’s happened over the last few months took place at another program, there would probably be a lot of players checked out at this point of the season. If this were any of the previous few years at CU as well, that would also probably be the case. But not this year.

“Through all the adversity that we’ve faced as a whole, we’re just a really tight-knit group,” senior safety Anthony Lyle said.

Michael Zeman has no more records left to break.