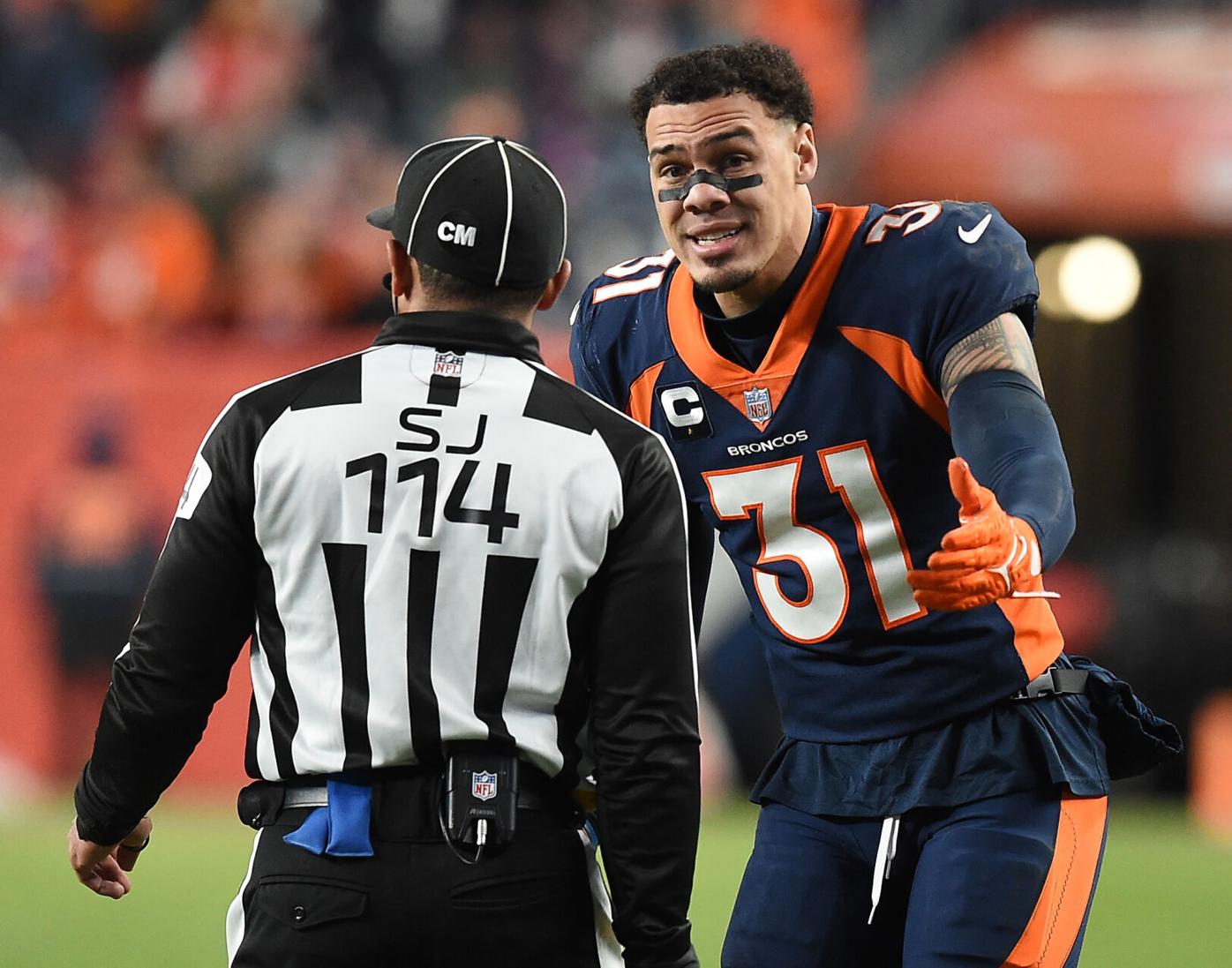 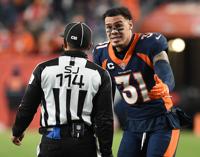 Broncos safety Justin Simmons argues with an official about a pass interference call that he thought should have been made. The Broncos lost their final game of the season 28-24 to the Chiefs at Empower Field at Mile High on Saturday, Jan. 8, 2022. 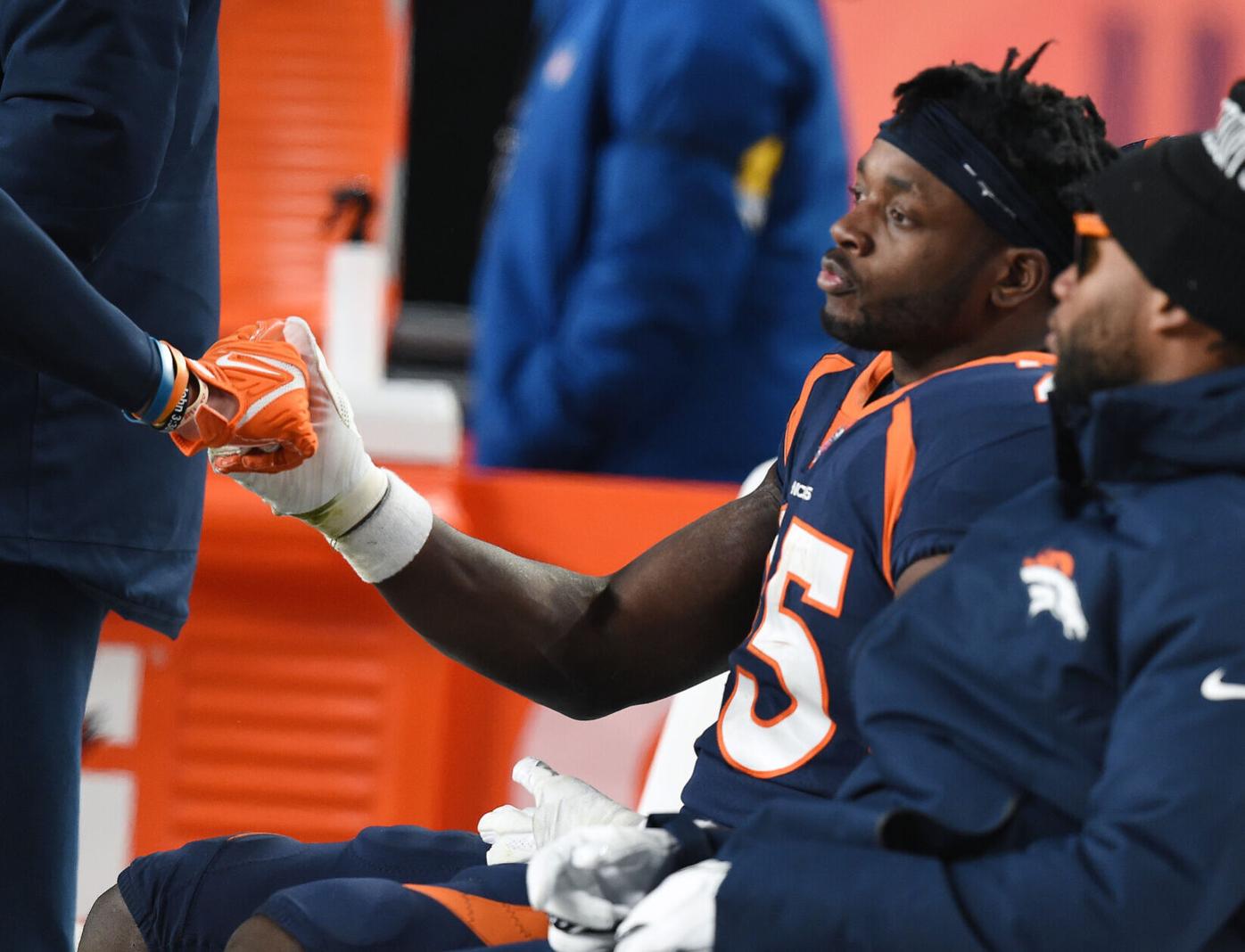 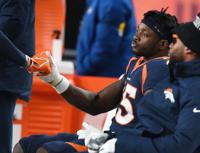 Broncos running back Melvin Gordon III sits on the bench after fumbling the ball in the 4th quarter. He was getting a comforting handshake from a teammate in a lost to the Chiefs on Saturday at Empower Field at Mile High Stadium.

Broncos safety Justin Simmons argues with an official about a pass interference call that he thought should have been made. The Broncos lost their final game of the season 28-24 to the Chiefs at Empower Field at Mile High on Saturday, Jan. 8, 2022.

Broncos running back Melvin Gordon III sits on the bench after fumbling the ball in the 4th quarter. He was getting a comforting handshake from a teammate in a lost to the Chiefs on Saturday at Empower Field at Mile High Stadium.

DENVER — As George Paton repeated the most important characteristic in the next coach of the Broncos — “leadership” — the players should have heard a ringing in their ears.

Here’s a hunch Paton was talking to them, too.

Where have you gone, Demarcus Ware?

Good to see Paton, the general manager, can see a franchise quarterback is not all that's missing at Dove Valley. He’s right on track saying the Broncos require a profound leader to cure their ills. That goes for the locker room, too, where the Broncos have a leadership void.

When you're going on three coaches in five years, the problem's not all with Vance Joseph and Vic Fangio, the latest fired coach Sunday.

Like everything else in this clown world we’re living in, the Broncos contending for a playoff spot feels like years ago. But that’s right where they were on Dec. 12 — 7-6 and one game out of the playoffs. Time to ramp up the effort for a stretch run toward the postseason, right?

The Broncos rolled over. Over the next three games (180 minutes of game time), the Broncos had a lead for a grand total of ... 5 minutes, 38 seconds. They led for 1.3% of the Bengals game, 8.1% vs. the Raiders, 0% vs. the Chargers. How's that for finishing strong? The Broncos were at their best with no pressure. See the upset of the Cowboys or the hard-fought finale against the Chiefs. But with something on the line they folded like the old lawn chairs clogging up your garage.

“Everybody wants to blame coaching,” as Paton said, but Vic Fangio wasn’t playing the games.

Justin Simmons has worn the leader title for a while now with a $61 million contract to back it up. But after six seasons without a playoff appearance, it's fair to wonder if Simmons should be the voice or a voice. And without the obvious choice of a franchise quarterback, no one on offense owns the resume or shown the personality to deliver a kick to the backside.

So Paton’s on the hunt for a coach with those chops.

The next three months bring tremendous pressure on Paton, who is 100% in charge of the Broncos show, according to team president Joe Ellis. Their struggle bus offense played with no room for error. These days that’s true for the Broncos as a whole. With 23-year-old Justin Herbert on the rise with the Chargers, Patrick Mahomes forever with the Chiefs and the Raiders in the playoffs, the Broncos can’t afford to whiff on the next coach and quarterback. Six years of bummers turns into 12 real quick.

Given Paton’s rep as a grinder who flips over every rock, I believe he will identify a dynamic coach for the Broncos. Better hope so, at least.

Because Mahomes isn’t getting worse, Herbert isn’t near his peak. Who knows which direction the Raiders will go? They’re the Raiders. But they’ve owned the Broncos for five seasons now.

Over the past five seasons the Broncos had six losing streaks of at least three games. Over that same stretch they’ve gone 10-20 in the money months of December and January, when you learn who still wants to be there and who's booking reservations for Cancun. Leaders stop the bleeding and police their own. Those 2015 Broncos made for one wild and crazy locker room, but pity the teammate who wasted Aqib Talib's film study or Darian Stewart's effort.

“I can’t say leadership enough,” Paton said. “We’re looking for the right leader for this organization.”

Count me in the statewide chorus that believed the Broncos needed a change from Fangio. In a bottom-line business, it wasn’t clicking, with three losing seasons and a 19-30 record to show for it. But it’s not like these awesome Broncos players I keep hearing about did Fangio or Joseph many favors.

The Denver Broncos are looking for their next head coach. Here are the latest updates and insights concerning the search.